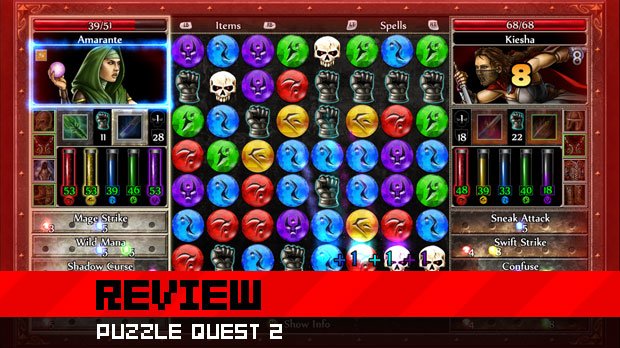 Let’s be honest — when Infinite Interactive released Puzzle Quest: Challenge of the Warlords in 2007, it didn’t reinvent the wheel. It doesn’t take a rocket scientist to marry the addictive activities of gem-matching, leveling up, and butchering orcs with magic powers and broadswords. But make no mistake, by simply combining those elements, the Australian developer stuck gold. Many sleepless nights were spent matching skulls, and engaging “just one more” troll before putting the controller down for the night.

Infinite Interactive tried to follow up its success with Puzzle Quest: Galactrix, which introduced not only a sci-fi setting, but hex tiles and a somewhat convoluted gravity system. For a number of reasons — off-putting mini-games and wins seemingly based on luck more than skill — Galactrix failed to capture the imagination and attention of many fans of the original.

Now with the true sequel, Puzzle Quest 2, the developer brings back everything you loved about the original with a new coat of paint, and some new mechanics that don’t stray too far from the source material. The result is a game that feels wholly familiar, and like a homecoming for a series that nearly lost its way. But is that enough? For fans of the original, the answer is “please stop talking to me, I have a rat swarm to slay.”

It wouldn’t be surprising to find the words “IF IT AIN’T BROKE, DON’T FIX IT” scrawled across a whiteboard somewhere in Infinite Interactive’s offices during the development of Puzzle Quest 2. While Galactrix seemed like an experimental take an already successful formula, this true sequel reaches back and borrows so heavily from the original that’s it’s almost an identical game. Almost, but not quite.

The core mechanics are the same, with players battling enemies (or other players in the game’s multiplayer) using classic match-three gameplay popularized by PopCap’s Bejeweled. The angle here is that colored gems are matched to earn “mana,” points that can be used to launch magic or other attacks. Skulls that appear on the board are your primary form of offense; match three of those and you’ll deal damage to your opponent. Match four or more, earn more mana, deal more damage, and earn another turn. 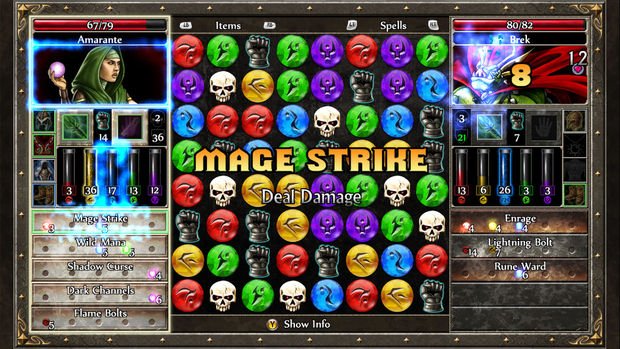 See? No surprises here — it’s Puzzle Quest, just like you remember it. But there is a key distinction here, which adds a new layer of strategy to your battles — action gems, and the use of weapons, shields, and items. Match three or more of any of the fist-looking action gems seen on the playing field to earn action points, which can be “redeemed” to launch attacks with a held weapon or to defend with a shield. This sticks close to an already existing match-three formula — players don’t have to really anything new or complicated — while giving players even more tactical decisions to make. Do you match colored gems to rapidly acquire the ability launch a magic attack, or do you continue to match action gems to deal massive damage further down the road?

Infinite Interactive’s desire to not stray from the typical match-three formula spreads to every part of the game. In fact, each and every aspect of the core game (including all of the “mini-games”) are based on this concept. Looting a chest? Here’s a match-three game where you match coins and keys to earn your keep. Opening a door? Match a certain number of locks in a set amount of turns to proceed. Bashing open a door? Get ready to match some gems.

While this might sound monotonous and bit “one-trick,” it undeniably goes a long way. Never underestimate the compulsion to find and match gems; Bejeweled was a breakout success for a reason — it’s simple, it’s fun, and it’s highly addictive. What Puzzle Quest (and this sequel) brings to the table can’t be ignored, either. The questing, the leveling up, working to find that next item is a “hardcore” wrapper that does an excellent job of concealing some decidedly casual roots. The upshot is an tremendously addictive title that, despite its seemingly mundane nature, never really gets dull, its accessibility perhaps its biggest strength. 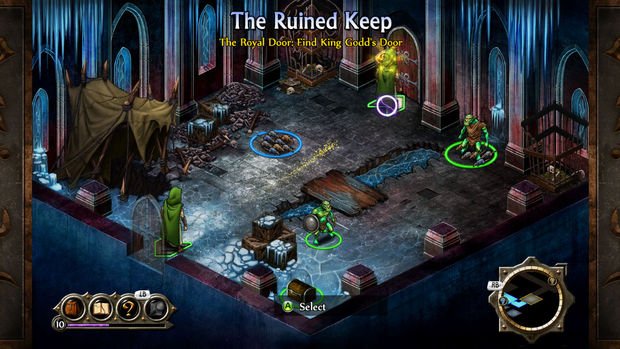 To be fair, although it’s extremely similar, Infinite Interactive didn’t simply bottle up Challenge of the Warlords to be peddled as a new game. The title has been given a number of renovations, from the brighter, comic book-style artwork, to a more pleasing overworld (and dungeon) navigation system. The story itself is also more engaging this time around, and while it’s unquestionably not why you’ll play Puzzle Quest 2, it should be noted that the developer at least put forth the effort.

Also of note, the game’s AI to all appearances has seen the error of its ways and no longer “cheats.” The original Puzzle Quest seemingly handed adversaries perfect sets of gems, dropping and chaining a nearly inexhaustible cache of skulls and other things that would inch you towards doom. While Infinite Interactive has always rejected the notion that it intentionally gave the AI the upper hand, it has to be said that it no longer seems to be an issue… it must have tweaked something. Whatever the case, it’s a welcome respite from some of the relentless “hands tied” beatings handed out in Challenge of the Warlords.

Right now, there are two versions of Puzzle Quest 2 available for purchase, one for Xbox LIVE Arcade and one for Nintendo DS. Both games are identical in content, with a few key differences. It goes without saying, the Xbox LIVE Arcade version of the game simply looks and sounds superior, with sharp high definition visuals and some extensive (if somewhat suspect) voice over work. [Note: All screens used here are from the XBLA version of the title.] The DS version has the edge, however, in playability — it’s simply easier to tap and slide to move gems and your character on the map. The dual screens also helps, keeping important battle information and other details on hand whenever you need it. 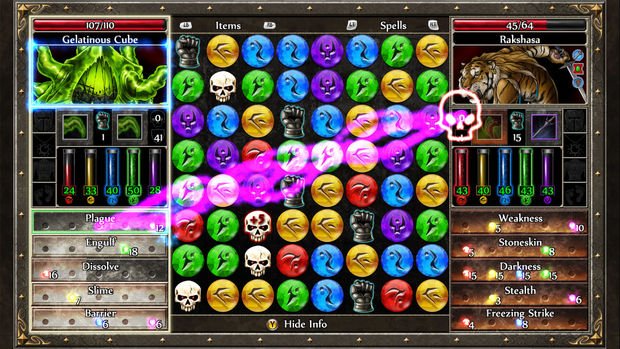 With that said, the Nintendo DS version is also $30 new, while the the XBLA version is only 1200 MS Points (roughly $15 dollars). Considering both titles feature the same content, it’s hard to justify telling someone to buy the portable version over the digital download because of this discrepancy. That is, of course, if you have the option… or simply must play it on the go. Again, both games hold up well; you can’t really make a wrong decision here.

Puzzle Quest 2 isn’t going to set the gaming world on fire with its inventiveness, and that’s particularly obvious bearing in mind that Infinite Interactive released such a similar game three years ago. For most, that won’t matter, and it shouldn’t. Puzzle Quest 2 is as fun as the original, and offers enough new content for old hands that they should want to revisit the series. Fair warning, though — while killing that rat swarm is of the utmost importance, remember: you have people who love you and don’t forget to bathe.