Professor Layton and his apprentice Luke have returned for their third DS game, and as those who have played the previous games probably expected, it’s really good. Professor Layton and the Unwound Future takes the formula that’s worked so well for the past two games and pretty much leaves it untouched. Aside from a few new minigames, the new Super Hint option, and (obviously) the story, nothing has really changed from any of the previous Layton games.

I think that’s a good thing. 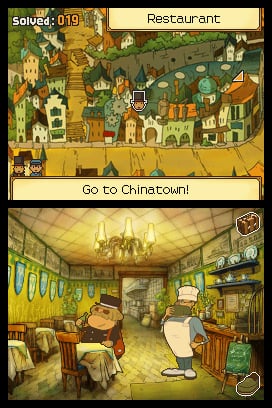 Layton and Luke are invited to the unveiling of a scientist named Dr. Stahngun’s latest invention — a time machine. Out of place and surrounded by some of England’s most respected scientists and political leaders, Layton and Luke end up embroiled in a massive mystery after Stahngun’s machine explodes during the demonstration, causing both the scientist and the Prime Minister of England to vanish without a trace.

Shortly afterward, Layton receives a message from Luke, but it’s dated ten years in the future. The future version of Professor Layton has become a criminal and taken over London with his organized crime group he’s named The Family, and Future Luke needs Present Day Layton’s help to put a stop to Future Layton’s nefarious activities. Layton and Luke are able to find a way to travel to this Future London, and this is where the majority of the game takes place.

Confused yet? This is just the beginning. No spoilers here — but, just like the last Layton games, nothing is ever what it actually seems to be. Overall, I think this is the strongest story yet of the series. It still has the trademark “Oh, by the way, here is a bunch of information we didn’t tell you until the last minute that makes the entire mystery make sense” that is kind of a hallmark of the series, but generally speaking I found the story to have a bit more mature tone than the past games. As you approach the final chapters of the game, the story takes a fairly dark turn, and the final few scenes are actually incredibly moving. 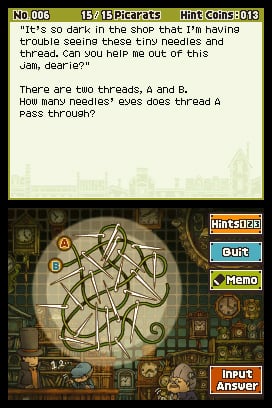 The animation and art in the Layton games have always been great, and Unwound Future doesn’t disappoint. There are way more cutscenes in Unwound Future than all the previous games, and they’re all done in that fantastic European animation style that the series is known for. Both the cutscenes and the gameplay art are incredibly detailed, and I actually went back after I finished the game and watched a couple of them again from the extras menu because I really enjoyed them. The voice acting is also top notch, although Layton sounds slightly different than he did in previous games — a little bit more gruff, but it’s not terribly noticeable.

Gameplay is virtually identical to the previous games in the series. Layton, Luke, and whoever else happens to be accompanying you at the time go through town, talk to the residents, madly tap the screen to find hint coins, and have a barrage of puzzles constantly thrown at you. A number of the puzzles revolve around the whole time theme of the game, so expect a significant amount of clock puzzles and puzzles that ask you to figure out how long it takes for people to do various things. Despite the game being very similar to previous titles, most of the puzzles still feel fresh and original. The style of some of the puzzles may be similar to those in previous games, but rarely do you feel that you’re just rehashing puzzles from the older games.

On the whole, the puzzles in Unwound Future are slightly less difficult than the ones in previous games. The sliding puzzles everyone loves to hate are barely present in Unwound Future, and the few that exist in the main game are much easier than the ones in the previous series. That isn’t to say, though, all the puzzles are easy — there are still quite a few in the game that will have you stumped, particularly the ones in the bonus puzzle houses that are unlocked through completion of the various minigames. As in the past, the hint coins you find in each area can be spent to unlock three hints to help you if you’re having trouble. If you find yourself really stumped, and the three hints you’ve already purchased aren’t helping, you can spend two additional coins to unlock a Super Hint. The Super Hints basically tell you almost exactly what you need to do to solve the puzzle, barring perhaps the last one or two steps, so I would suggest holding off on using them unless you’re truly stumped. I appreciate that the option was included though, as I imagine everyone has one or two puzzle types they simply can’t stand. 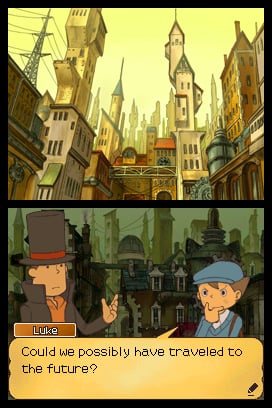 The three new minigames included in Unwound Future all work well, and are probably my favorite set of minigames in any of the Layton games. The first one you have access to is a set of picture books that have incomplete stories. Using various stickers you collect by solving specific puzzles, you are tasked with putting the correct stickers into the books so that the story makes sense. It’s the simplest of the three minigames, and not particularly difficult, but I found it to be a nice distraction from the more difficult puzzles of the main game.

The second set you gain access to involve a toy car and is similar to Chu Chu Rocket and the Hamster minigame from Diabolical Box. Armed with a set of directional arrows and jump squares, you have to guide the car around various tracks using the arrows and jump squares, collecting every item on the track and finishing in a specific goal square. While the tracks start out easy, some of the later ones require some serious planning and strategy.

The final minigame involves a parrot you find — the animal companion in Unwound Future that helps you in finding hint coins, like the aforementioned hamster, and the robotic dog from Curious Village. The parrot minigame is the most interesting, and the most difficult, of all three minigames, and some of the levels will seriously stump you. As the parrot, you are tasked with delivering parcels to various characters you meet in the game. You can’t actually control the parrot though — all he does is jump in short hops. Each level has a bunch of pegs scattered across the screen, and you have a limited number of ropes you can stretch between them. The parrot can land on any flat rope, and will bounce off any angled rope you have stretched across the course. Oh, and there’s also a time limit. There’s only one solution (as far as I could tell) for each delivery, and it’s not uncommon to think you have it solved only to run out of time right before the parrot lands. I had to take a couple breaks from this minigame because I got really frustrated on a number of the courses, but I eventually managed to solve them all, and ended up appreciating their inclusion. Despite being difficult — they are a really unique addition to the game, and unlike any puzzles in any previous Layton titles. 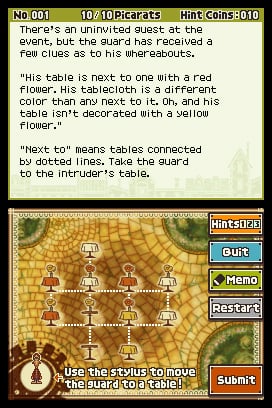 It took me between thirteen to fourteen hours to complete the main game, and I still haven’t finished all of the bonus puzzles. Even once you complete everything, Unwound Future has the weekly downloadable puzzles just like the last games, so you’ll probably find yourself booting the game up at least once a week after you finish the game. Overall, Professor Layton and the Unwound Future is a wonderful title, and my personal favorite of the series. The deus ex machina at the end will likely annoy a number of players, but it’s not enough to seriously tarnish the title, and Layton fans should be expecting it anyway.

Unwound Future isn’t innovative or groundbreaking, and what few changes exist are mostly just new puzzle types, but the game and overall story are polished, interesting, and just simply fun. Layton and Luke’s adventures will have you playing for a while, and even though the game isn’t doing anything new, it avoids ever feeling stale.