Sony certainly killed it with the PS4, didn’t they? I mean, Microsoft handed them the “W” on a silver platter as soon as that draconian DRM presentation hit.

But something remarkable happened: Microsoft fought back. Instead of throwing in the towel, they made strides in the backward compatibility arena that no publisher had done before. All the while, Sony crafted killer exclusive after exclusive, fighting the good fight with the thing that matters most: games. Sony had to work to sell those 112-million-plus units and take a coveted spot in the “top five all-time best-selling console” list.

This generation, after all of the groundwork laid by Microsoft, we’re poised for a fairer fight. But Sony is really coming in swinging yet again with the PS5.

[As this is our second of the two major console reviews, here’s a quick side note. We’ve made both articles fairly uniform, so you can compare and contrast them together. You can find our PS5 unboxing article here.] 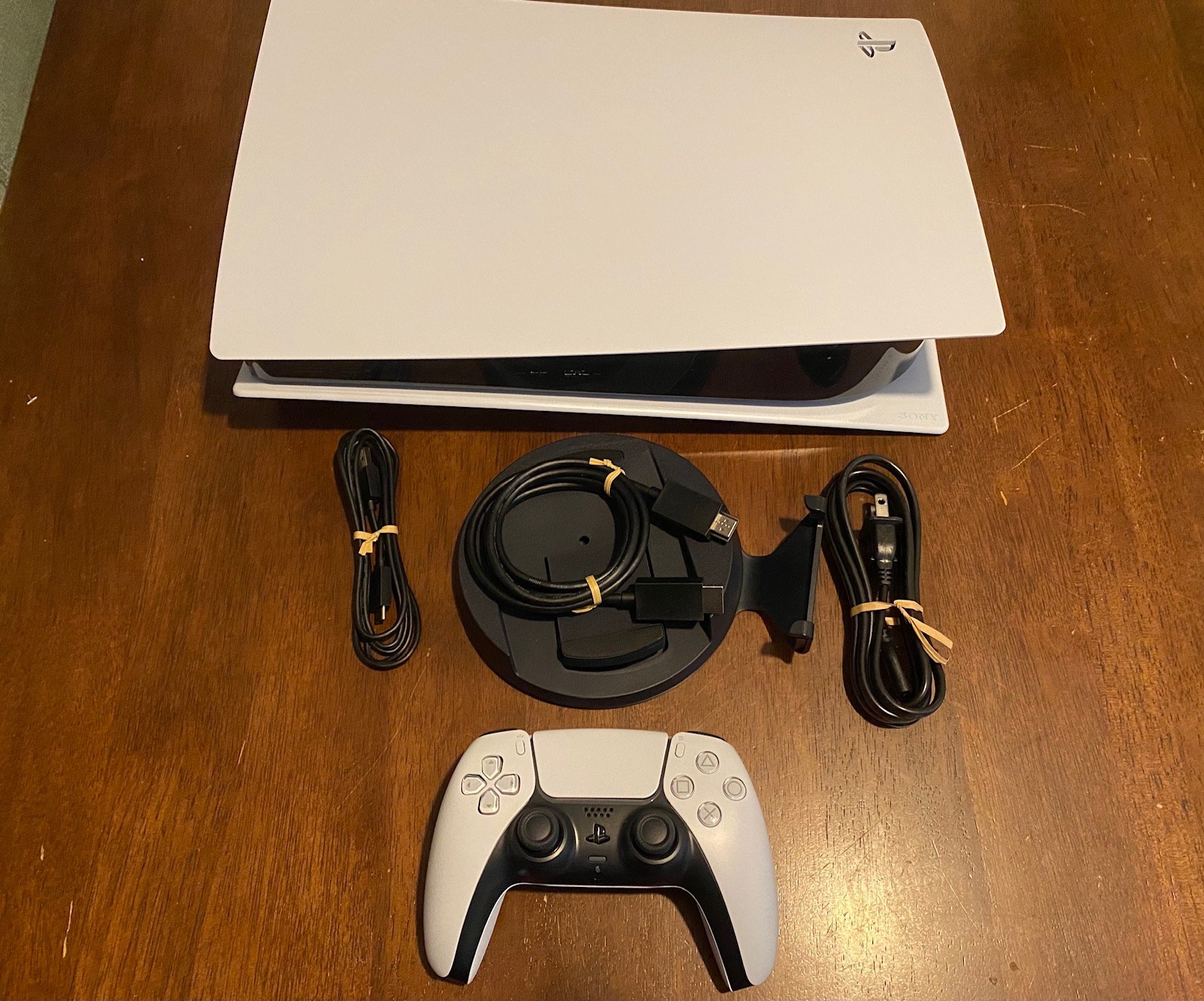 The PS5 is 15.4 inches tall, 10.24 inches deep, and 4.09 inches wide. This boy is big: so big, that it might not fit in your current entertainment setup. Sensing this, Sony did include a stand for the PS5, allowing folks to display it vertically. Even then, it might be an eyesore.

I’m sort of an outlier in that I don’t mind the frankly bold design. Some might find it ridiculous, but I like that it stands out and there’s no hard and fast rule about how game consoles should look (the GameCube forever codified this).

But while I’m okay with the Bubblegum Crisis helmet motif, I have had issues moving this behemoth around — even in terms of twisting it to plug in stuff behind it. It’s semi-wobbly when placed horizontally, which is more of a slight annoyance than a major problem. Now, time to move on from aesthetics and deeper into the hardware.

Here’s a quick raw list of specs (you can compare them to the Series X):

Utilizing liquid cooling, the PS5 is significantly quieter than the PS4, which almost unanimously was referred to as a “jet engine.” I actually went through one dead PS4 last generation, so knock on wood, the PS5 is made of sturdier stuff.

The good news is that the controller, on paper, seems hardier on its own. It feels higher in quality compared to the DualShock 4, and in my tests, the battery lasts a few more hours on a single charge. It also has a lot more tech baked into it, like the (good) enhanced haptic feedback, adaptive triggers (that actually do feel like an upgrade), and a built-in mic (which can be muted from the controller with a dedicated button).

The jury is still out on just how much developers will take advantage of the DualSense’s features, but for right now: I’m really into it.  We’ll talk more about specific DualSense functionality in future game coverage. 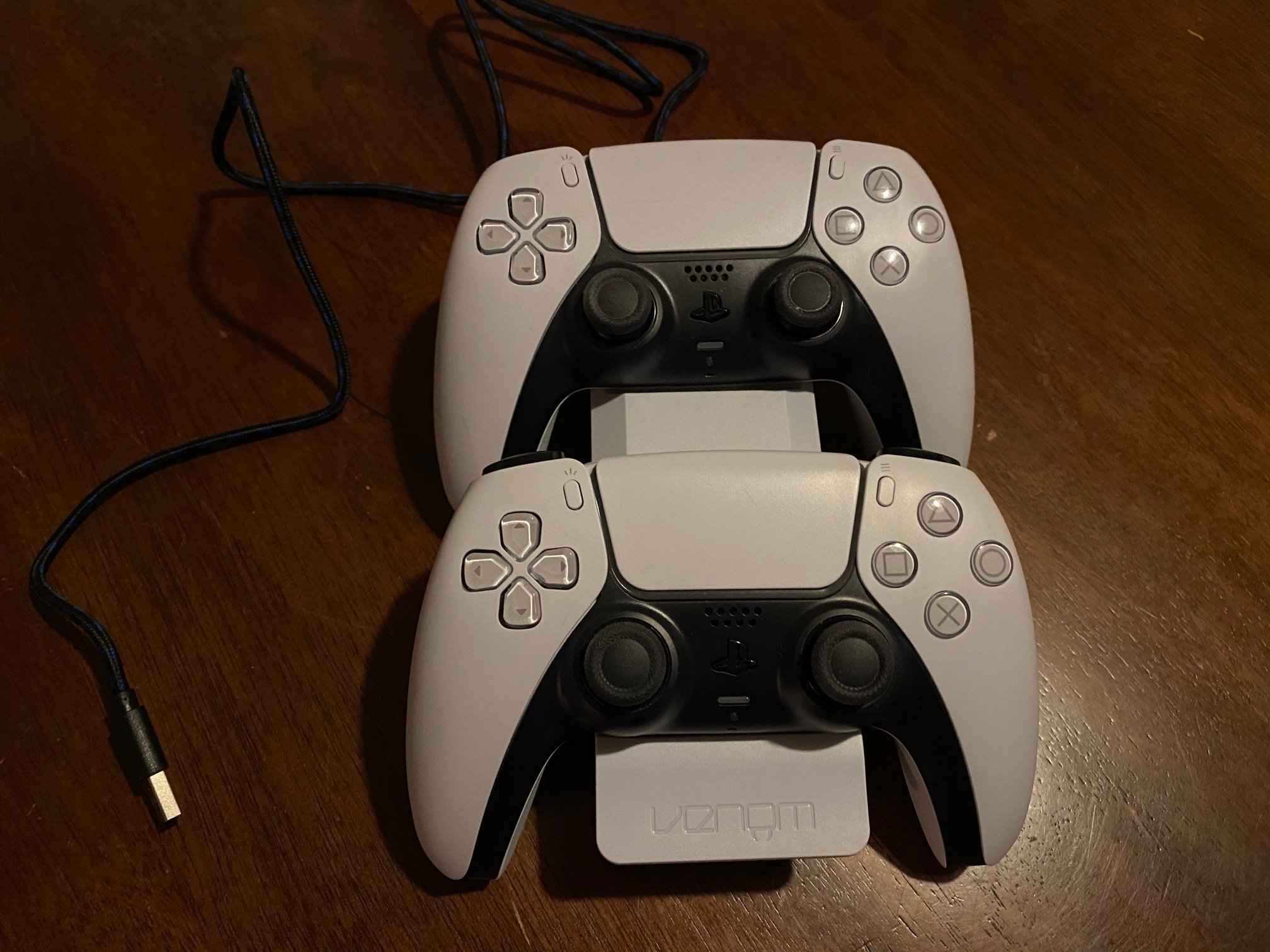 [Update: Venom also sent us a copy of their dual-controller docking station, which is designed to slot into the PS5 directly via USB. I set mine up with the back USB port and snaked it to the side of the PS5, where it fits the white aesthetic nicely.

In short, it’s a pretty great solution for those of you who are lucky enough to have two DualSense remotes at this point (I had to get another one for testing purposes!). The design is simple and sleek, and works a lot like my old PS4 charging station. Of course, it’s a shame that PS4 accessories no longer work, but that’s the price of progress. It works out in Sony’s favor, for the most part, even if it hits your wallet where it hurts.] 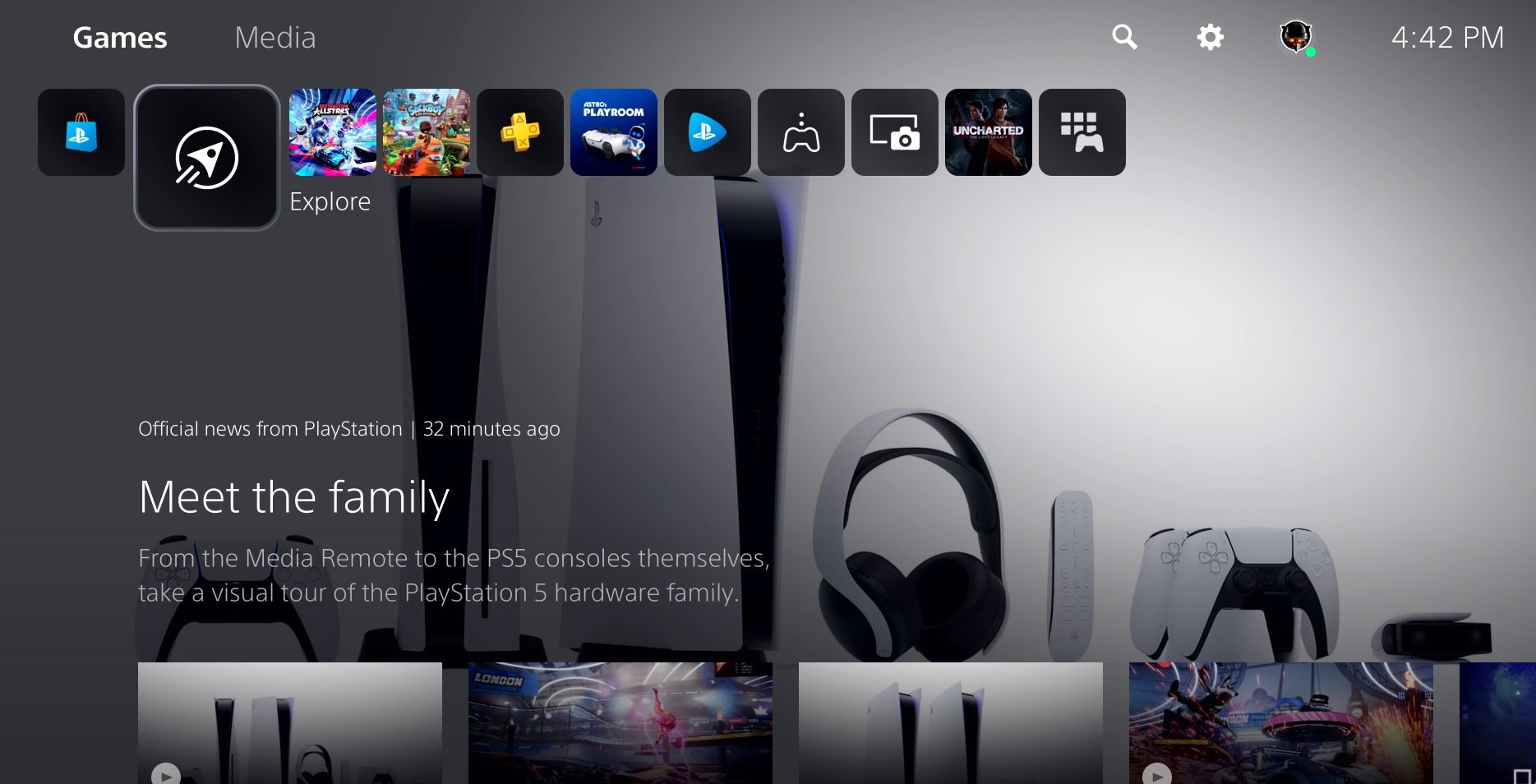 Sony is banking on “cards” this time around and has completely reinvented their user interface experience. There’s a bit of give-and-take here with that strategy.

Initially, I really got lost in this new UI. I love the newness and speed of it. The thrill of having to figure it all out. Part of that thrill came from the customizable home button screen, where you can add (or remove) most of the features you’ll use on a daily basis. A handy “switcher,” found on said screen, helps you swap between apps or resume recent games. There’s also a ton of new functionality that we weren’t able to fully test yet (and will cover when it is possible), like the built-in hint videos.

The learning curve is natural, but the PS5 could really use some updates for navigation (folders). Some things that were single clicks on PS4 now require multiple menus to sift through: though the saving grace is that it’s all blazing fast. Every facet of the PS5 loads with little to no delay; even the “storage space” menu that sometimes took multiple minutes to load on my PS4. Speaking of: the settings portion is mostly unchanged from the PS4’s design, so you’ll feel right at home there.

As a note, media and entertainment apps were not available to properly test before this review period. If anything is drastically different from the PS4 experience, we’ll provide an update in this section when the PS5 is available to the general public. 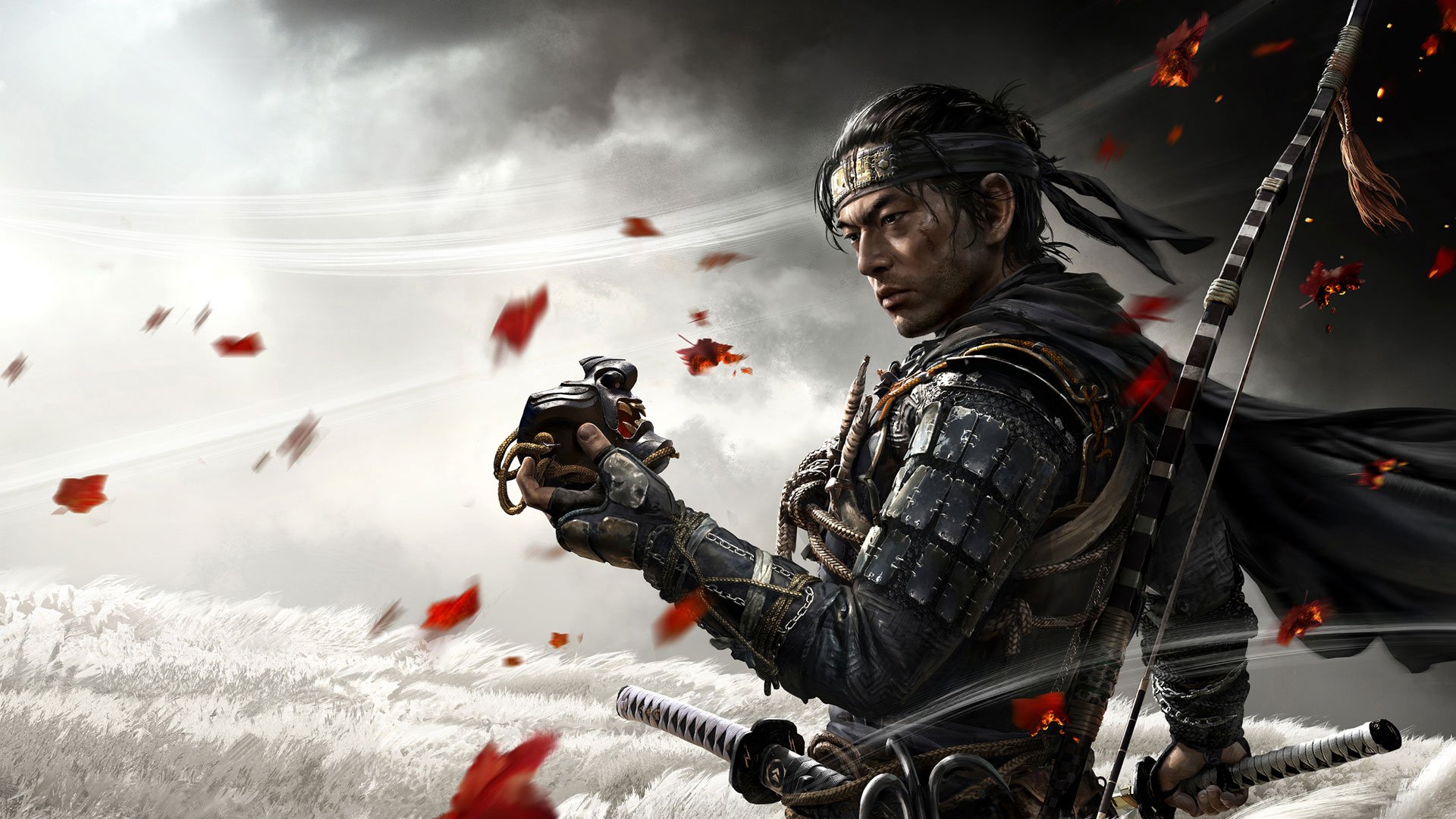 What about all your old stuff?

Sony’s backward compatibility plan isn’t as transparent as Microsoft’s, but for the most part, old games did show up instantly in my account and boot up.

Although games are getting “PS5 upgrades” (subject to the whim of the developer), recent titles like Genshin Impact work fine on the PS5, as well as incredibly old relics like Super Motherload. In my experience, transferring old saves over to the new generation was a bit more work compared to the Xbox console family (which does it automatically and without a storage limit), but I was able to bring them over all the same.

There are still some unknowns. The PS4-to-PS5 backward compatibility process is not crystal clear compared to Microsoft’s Smart Delivery system. The list of non-supported games used to be very small, but it’s potentially growing based on recent confusion and my hands-on experience.

Assassin’s Creed Syndicate, a game that allegedly wasn’t compatible with PS5 (Ubisoft has since walked this statement back), did download and load on my PS5. Several other library listings (like Battleborn, several Battlefield games, and a few PSVR titles) state that they are “available on PS4” and cannot be installed on PS5 — at least in my experience at the time of publication, pre-launch. Hitman Go, a Sony-confirmed “won’t work on PS5” game, displays the same terminology. We’ll be reporting on any further changes and updating this section if needed. For now, the “vast majority” statement from Sony seems correct.

PSVR “adapters” are also being shipped out to users as this article is being written (we obtained one early for testing, and it works!), which begs the question of why the new HD camera couldn’t have provided PSVR support via an adapter in the box (presumably, it will work for a potential PSVR 2.0). Additional plug-and-play SSD options (that can run games directly on the PS5 instead of housing them) are also unclear.

All of the above might not impact you in the slightest, but it’s something to consider. Sony is looking to the future with the PS5, which is going to be appealing to a lot of people and scorn others. 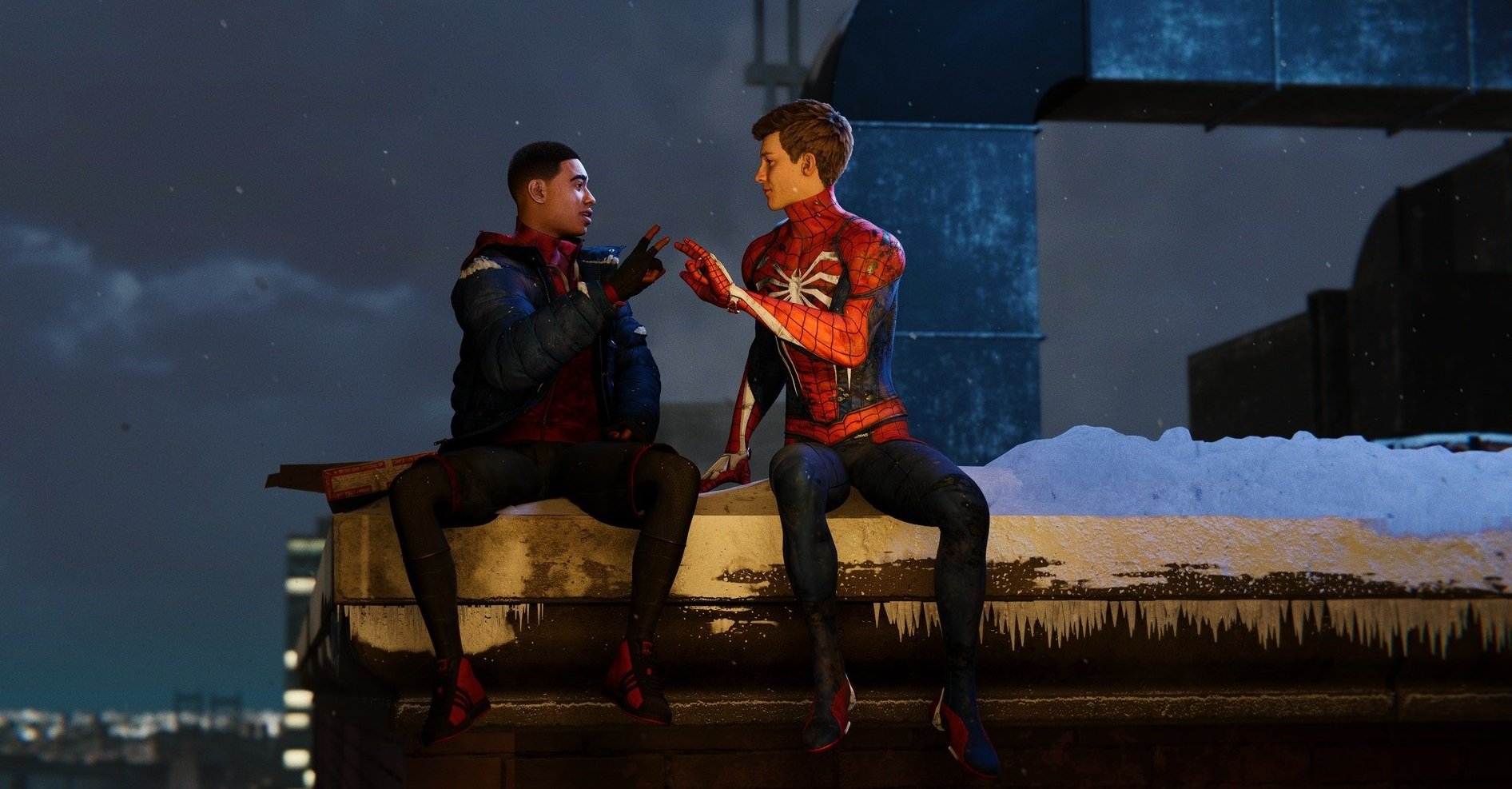 What about all the new stuff?

Good news! The entire PS5 experience is based around newness and that includes actual new exclusives.

This is by far the most exciting aspect of my PS5 testing period, as it felt genuinely thrilling to be able to try out games that perhaps best indicate what Sony is planning for this generation. Miles Morales is a standout exclusive, incorporating the strong foundation that Insomniac laid with Spider-Man with a new story that’s worth telling. It also looks fantastic and contains near-instant load times. While several other games I tried out had faster loads, the first-party Miles Morales basically does not have load screens at all.

Astro’s Playroom, while less technically taxing, is similar. Loads are instant, including those from the game’s fast-travel hub menu. If this is a taste of what’s to come for this generation, I think a lot of people are going to be happy based on this component alone. The same goes for the DualSense, which is pushed to the limit as a showcase of what the hardware itself can do.

We’ll have coverage of more PS5 titles as their embargoes are up, which we’ll link here. At the time of publication, we did not have access to two of the other big Sony exclusives: Sackboy: A Big Adventure and Demon’s Souls. Destruction All-Stars (which I have written out as Destructoid: All-Stars over 100 times) has been pushed back to 2021 and is now a PlayStation Plus title.

One final note: the PS5 has 667.2 GB of usable SSD space by default (Astro’s Playroom is 10.98GB). That’s around “three Call of Dutys” of storage space. I’m already playing storage Tetris, but this is not a Sony-exclusive issue. 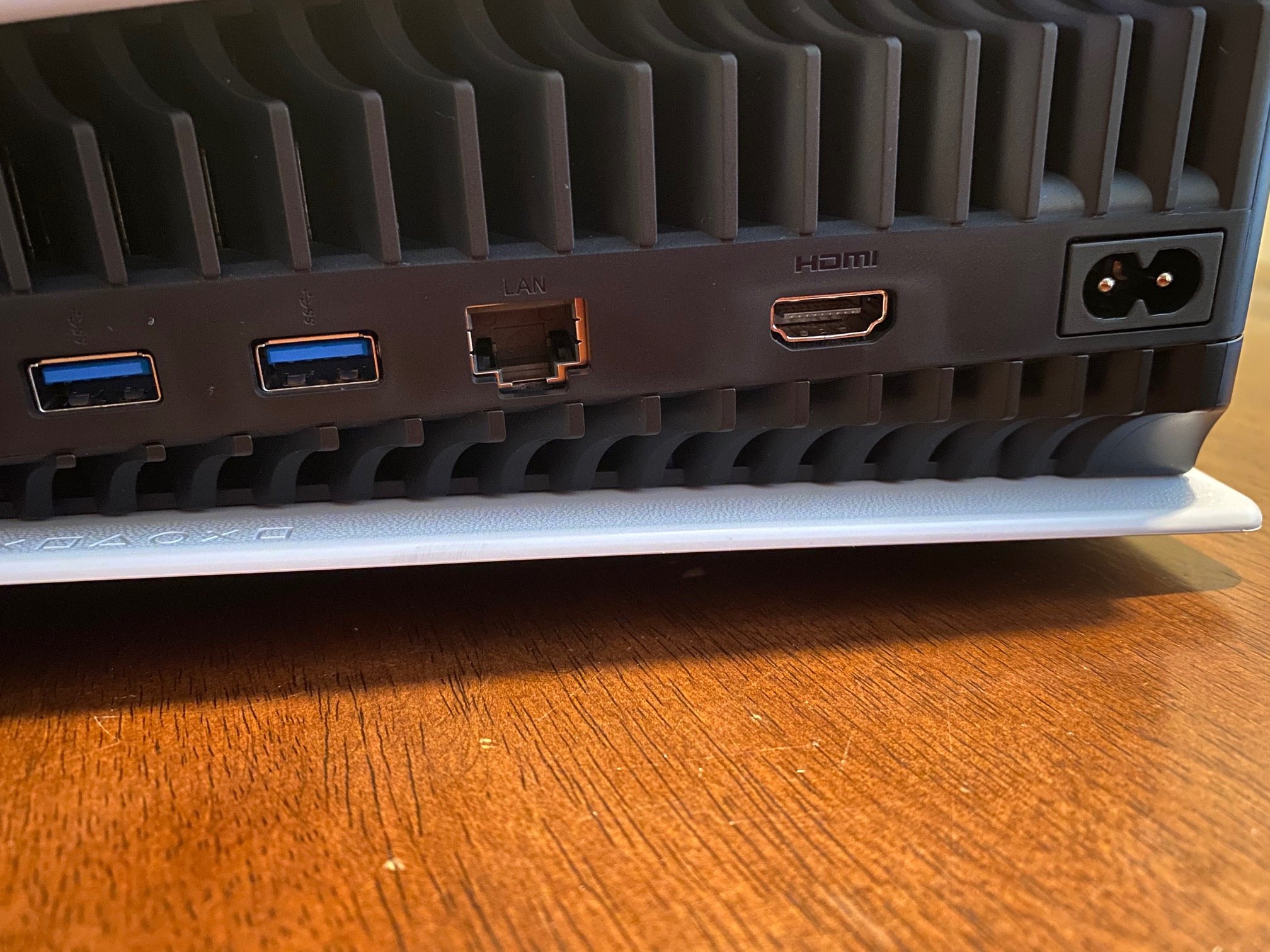 A few legacy issues aside, Sony is jumping into the next generation pool with both feet.

The DualSense controller is markedly different from the DualShock 4. The PS5’s general look and feel is a stark departure. Its UI is entering new territory as well with some interesting features. It has bonafide (good) exclusives and first-party games to peddle day one. But not all of it is perfectly executed.

If you one day have the option to choose between the Xbox Series X and the PS5 and want to feel like “next-gen” is upon you, the PS5 will probably be a better fit as it has several real exclusives and the new DualSense tech. Both consoles have far more positives than negatives and simultaneously look to the future as well as the past.

For that reason, it’s hard to choose an early “winner.” Amid all of this constant competition and innovation, we all win. Cheesy, I know, but we could all use some solace right now.