Our game systems do some video, but not quite enough, especially when you think about all of the awesome streaming Internet content out there. Slowly but surely, we’re seeing console-specific applications pop up on your PS3, Xbox 360 and Wii, but it’s not quite fast enough. Some of us want it now. I can’t tell you how many people I’ve met who are dying to cancel their cable/satellite service and just watch streaming Internet television on their living room TV.

PlayOn makes this all possible. This PC application runs in the background and serves up all the Internet video you could ever want to your game system of choice. And it does a very nice job of doing that. We put PlayOn through its paces for you in our full review.

PlayOn is a very small application that quickly encodes and sends along your favorite video services from your PC, through your network, and onto your game systems. It’s a PC-only application, but I was able to get it to work perfectly fine on my Mac systems using Parallels with Windows 7. I’d imagine Boot Camp would also work well for my fellow Mac users. 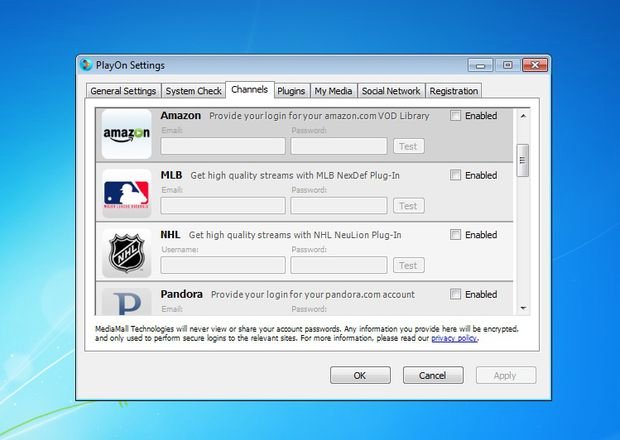 Video services like Netflix, Hulu, YouTube, Amazon VOD, and tons of others are listed under PlayOn’s channels tab. Others include Pandora, ESPN, and CNN, as well as many other web-ized television offerings. All you need to do is drop in your username and password for each service to enable streaming. Save, start your server, and then go switch on a game system.

I tried both the PS3 and the Xbox 360, and they worked like a charm. I liked the PS3 best, as the navigation seemed a bit easier. On the PS3, you’ll need to hit the menu item under Video that searches for media servers. PlayOn’s icon will appear, and by clicking on that, you’ll get a folder-based view of all your enabled content. For example, by clicking on Hulu’s folder, several subfolders would open up, even down to an alphabetical listing of all the shows on the service. In the YouTube folder, I was able to watch all of my uploaded videos, subscriptions and favorites. This experience was especially easy with the PS3 Bluetooth remote control.

The Xbox 360 version is just as easy. Simply find PlayOn’s served content under the Video Library of the Dashboard. There’s also compatibility with many other non-gaming systems, if you’re interested. 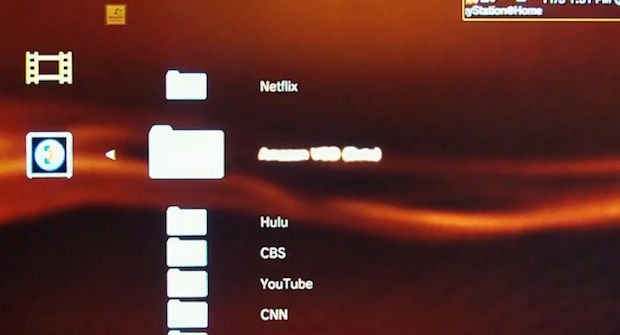 What impressed me most was the quality of the video. At first I wasn’t sure how nice of a stream would come through my network, especially with only 1GB of RAM being allocated to Windows via Parallels. Thankfully, there were never any hiccups in the signal for any service I tried. If content was shown on the internet in a higher resolution, that would come through on my living room’s 52″ LCD perfectly fine, in HD. Some of the shows on CBS and Hulu looked very nice in HD.

The performance of PlayOn is directly linked to how fast your setup is, and how you’re networked between the two. I have a powerline Ethernet connection between my Mac and my router, and this was more than enough. PlayOn recommends a 1.5 to 2.0 Mbps constant broadband download speed, which shouldn’t really be an issue for most users out there. 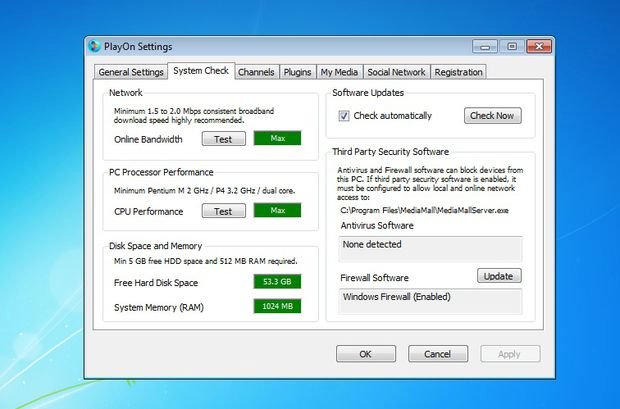 As for the software itself, it’s basically invisible. PlayOn is really just a little icon in your system tray. Double-clicking pulls up a settings box that lets you start and stop the server, tweak settings, add channels and even point to on-disc media files that you’d like to stream. The last function, called My Media, is in beta, and doesn’t seem to work with every video file. It loved QuickTime and the like, but didn’t play as well with some of the more specialized formats. I noticed that it requires a separate install of VLC Media Player to get going, so I’d think it would be able to play and encode anything.

PlayOn is quite impressive. I really like the no-hassle installation and background running features. Once your computer is on, all you really need to do is turn on your game system to get video going. Yes, some of the systems have dedicated services for specific streaming outlets, but this is everything, all in one place.

MediaMall’s PlayOn is $39.99, but there’s a free 14-day trial available on their webpage.