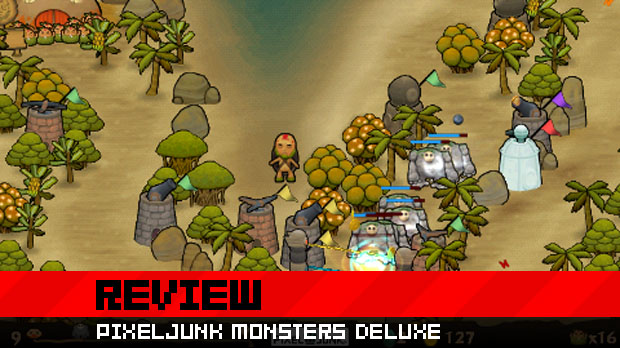 Q Games had a very solid title in the PlayStation Network release PixelJunk Monsters, and later with an update PixelJunk Monsters Encore. PixelJunk had a great design and look about it, and the game play was simple and approachable, but the best aspect was the steadily increasing difficulty and overall balance, which made it nearly impossible to put down. But, being a console game, you had to put it down sometime. Now, as a PSP title combining both the original and the update, as well as even more features, you never have to put it down. I haven’t.

In PixelJunk, you play as the mask-faced Tikiman, a guy who uses his slick tribal dance moves and his tree-transforming abilities to protect a little village of babies from attacking monsters. As beasts make a beeline through various forest maps directly to your baby-filled hut, you’ll work to replace trees in these forests with defensive weapons like canons, bows, and guns. Beasts come in ten waves, ending with a massive boss that slowly progresses toward your young’ins, requiring multiple hits from projectiles to take down. If they make it to your hut, they eat one of your babies. If all of your babies die, you lose.

If you do take down a baddie, they’ll drop coins and gems. Coins are what you’ll spend to turn trees into weapons. Gems can be saved to unlock more powerful weapons, or spent instantly to upgrade your map-placed weapons. If you’re cheap, you can also stand next to any placed weapon and dance, as dancing somehow fills a meter that increases each weapon’s power and range. It’s all very simple: Get money, place weapons, kill baddies, spend money for more weapons, and hope that none of your babies get eaten.

Oh, but it’s not simple at all, and this is why PixelJunk Monsters Deluxe is so addicting. You may think you have it in the bag after playing the first couple of maps, but wait until some of the more complex ones. You’ll really have to put planning and strategy to use in some of the later levels. Expect to fail. And just getting by isn’t enough, as you’ll need to finish stages perfectly to earn rainbows, which let you access more of the game. This game goes from a casual feeling to mind-busting very quickly, and we mean that in the best way. If you’re like me, you’ll be second guessing your weapon placements, running around like mad, gritting your teeth as the next wave advances.

A new addition is online play, with both random matching and room creation supported. Connect and you’ll be able to join up with other players to finish levels together. It works out to be both a cooperative and competitive experience. Online players will help you see levels that you might not have in single player But while both players are working toward the same goal, they each have the ability to gather coins on their own. It becomes a kind of race to see who can grab the most coins to do what they’d want. Of course, if you make the wrong weapon and placement choices, the blame is on you. While you can’t chat online, a very handy visual communications menu pops up as a ring around your character. Spin the wheel to pick a icon that conveys what you are trying to say — very easy, and there’s an icon for everything.

I only have a few minor nitpicks with PJMD. Even though the maps are varied in challenge and appearance, I can’t help but feel like I’m seeing (and hearing) the same thing over and over. Of course, this is to be expected of a tower defense game. At least it looks and sounds nice. The game also likes to zoom in on the wrong action at the most inopportune times, though that’s quickly remedied by tapping the L button. What I won’t be complaining about is the game’s difficulty, though. While it may be insanely challenging at times, what fun is an easy game, especially one of this type?

Again, PixelJunk Monsters on the PS3 was already a great game, but this PSP update is the ultimate version. Both the original and the expansion are included, as well as online play, new stages and new weapons. The game somehow looks better on the PSP screen, too. The best part is that this game is now portable, which actually may be good or bad, depending on how much free time you have to spare. Do not miss this, PSP owners.