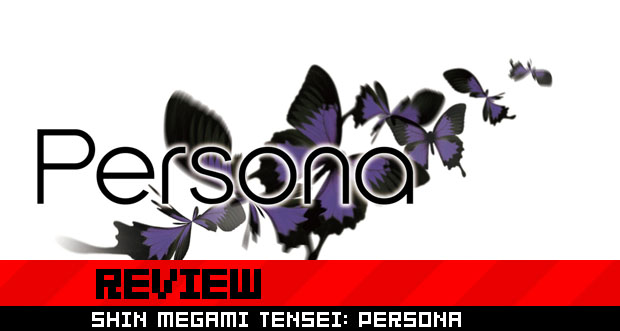 About a decade ago, PlayStation role-playing game Shin Megami Tensei: Persona came and went. It made a mark, but not one big enough to stand up against other RPG giants on the shelves at the time. It was praised, though, for being something different, as it broke away from role-playing game conventions. Later, sequel was released on the same system, but it may have had less of an impact than its predecessor. It wasn’t until the last couple of years, with the releases of Persona 3 and Persona 4, that the series really came into the limelight.  The gaming press showered both games with praise, bringing many new players to the Persona universe.

Those newer to the Persona series want to know how this first game compares to Persona 3 and 4. Long-time series fans want to know if Persona has aged well. What changes were made? Is Mark still black?

All of the above is addressed in our review of Shin Megami Tensei: Persona for the PSP.

I played and enjoyed the original title in the late 1990s, but it has been a long time since then, so Persona PSP was mostly a new experience for me. In fact, it turns out that only the bad things from the original stuck out in my memory. It seems that these same items were the ones that Atlus addressed in this remake, thankfully. The grainy, low-quality CG cinematics have been replaced by slick, high-end movies, complete with great voice acting. The dialogue was used to be painfully awkward; now it’s as smart and polished as it was in Persona 3 and 4. All of the characters are of the proper skin color and nationality, and the story now takes place in Japan as originally intended. And, if you play your cards right, Atlus has brought back the Snow Queen Quest, a story segment that they removed from the original during localization.

A dark story kicks off in school, after classes. A bored group of friends at St. Hermelin High perform a ritual they’ve heard rumors about, expecting results typical of an ouija board session. To their surprise, the ritual actually does something; it knocks them all out. Later, after they’ve awakened, they visit their friend Maki in the town hospital. During this visit, an earthquake strikes, and then all hell breaks loose. Literally. Because they’ve performed the ritual, the group are now able to summon personas that can help them fight against the demons that have infested their town. 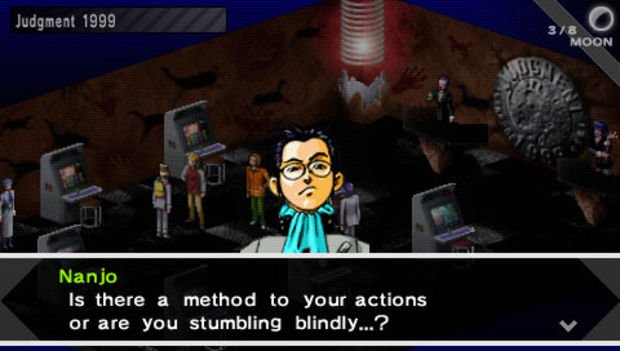 This guy is a dick most of the time.

At its roots, it’s still Persona. Same story, same look. Even though some of the visuals were touched up, this still largely looks like a late 1990’s PlayStation role-playing game. The battles aren’t the dynamic, fully animated 3D action-fests that those that started later in the series are used to. Instead, you’ll see your characters standing in place in an isometric grid. They might sometimes throw their hand over their head or swing their sword, but those expecting the sky to light up with Persona are going to be sorely disappointed. The dungeon crawling aspect is even more somber. You’ll spend most of your time navigating drab, flat-textured hallways in a first-person view. At best, it’s disorienting. At its worse, getting around is absolutely maddening. To be fair, the situation was nearly the same in the original. Time time around, though, they’ve added a mini map to help you see where you’ve been, and the walk speed has been increased significantly. 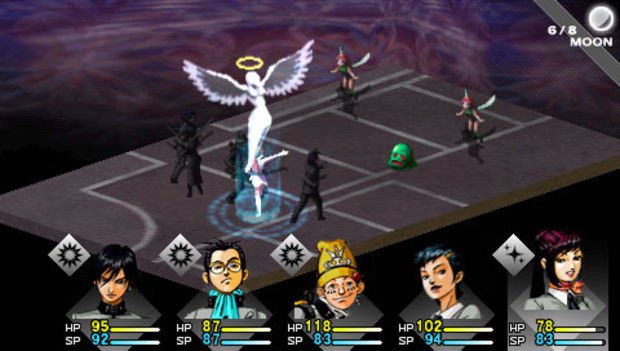 Your persona just kind of floats over your head in Persona PSP.

Persona‘s game play remains untouched, which is mostly a good thing. You’ll run around in what sometimes feels like a mouse maze of a dungeon, looking for some type of boss character to defeat to move onto the next one. While you’re searching/lost in this dungeon, you’ll be struck with a random encounter, which will whisk you off to battle. It’s here where you’ll get to appreciate Persona’s roots. Adding to the standard attacking and defending is the power of your persona. You can summon Persona to use their magical abilities to defeat enemies. Just as in many other Atlus games, you’ll look to exploit an enemies elemental and physical weaknesses, making each encounter seem like a small puzzle to figure out. If you don’t have the type of persona needed, you’ll have to create new ones by mixing spell cards. These cards are acquired by conversing with enemies instead of fighting with them. Say the right thing and they’ll hand over their spell card. Say the wrong thing and they’ll kill you. This wealth of options in combat keep things fresh, which is good, because the random encounter rate is a bit high. 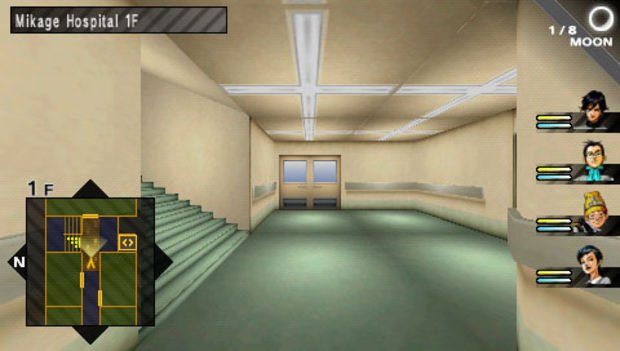 On the high random encounter rate: in one instance, I barely made it to a boss because of too-frequent encounters. I managed to beat the boss, but then died on the way to the closest save point, post-battle. I restarted, died right outside the boss’ quarters, restarted again, beat the boss again, saved, and then died right outside the save point. Those used to MegaTen series titles would likely be fine with this level of difficulty, but those new to the series should try to be patient with Persona. Slow, careful, and cautious wins the race here.

Some battle upgrades new to this version will make help you out along the way. Group commands have now been placed in an Auto menu, meaning that with a couple of button presses, you can have the whole party carry out preset actions. Also, hitting the start button toggles on and off a fast battle mode. When the fast mode is on, battle animations are cut down significantly.

As far as presentation outside battles and corridors goes, Atlus has done everything they could to spruce up Persona. The newly redesigned town overhead maps look great. We did notice a bit of the Pac Man effect on the maps, meaning that you’ll sometimes miss a left or right turn and continue going straight while navigating. The game’s soundtrack has seen the biggest improvement. Composer Shoji Meguro totally overhauled the soundtrack. The original music was great, but he has stepped it up to a level on par with Persona 3 and 4. Battle and action songs now have poppy vocals, and dungeon and map music will have you tapping your feet. The in-battle voices have been touched up a bit, too. They used to be laughably bad, and now they’re funny for the right reasons. 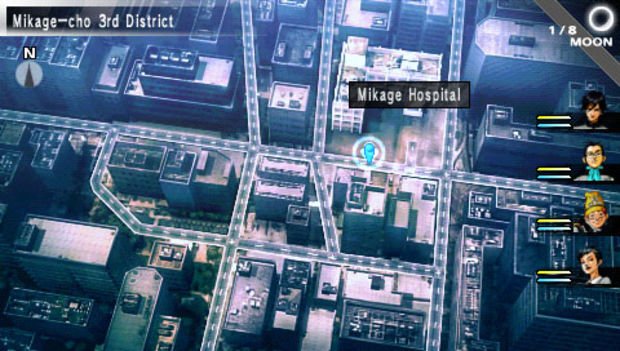 The town map has been upgraded.

Long-time series fans? You don’t even need to read this review. You probably already have Persona PSP pre-ordered. New fans, the ones that started on Persona 3 or Persona 4, would want to know that this first title is devoid of the whole social system that they’re used to. This means that the whole slice-of-life aspect is absent in Shin Megami Tensei: Persona, meaning that you won’t acquire social links or date cute girls or anything like that. In this game, you’ll see only dungeon crawling and minimal town exploration. If you can live with that, there’s still all the other Persona-isms here, including a deep battle system, killer music, and a great story in a modern day Japanese setting. For both new and old series fans, it’s really fun to see how one of the most popular role-playing game series started out.