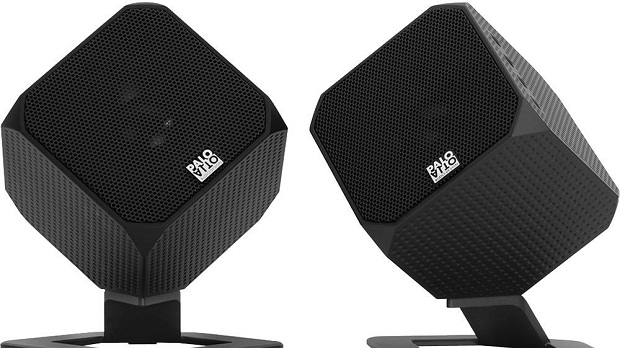 If you haven’t been able to tell by the fairly large number of headphone reviews I’ve done for this site, I have a thing for audio equipment. It’s probably the single biggest investment I make beyond my daily caffeine intake.

As a result, I have a tendency to care quite about about how my things sound and what I can do to get the most from my music, movies, and games. With that in mind, and the sad realization that, while I may want to, I cannot spend my whole life with headphones on, I decided to take a look at the rather unique-looking Palo Alto Cubik desktop speakers.

The first and most obvious trait that you’ll probably notice is the rather futuristic shape. Each piece is shaped like a cube with divots on its sides. The back panel, as one might expect, has all of the connectors and ports for power and input. On one face of the “cube,” there is also a small hole for the built-in, miniature subwoofer.

All together, it’s an aggressively modern aesthetic. Not so much sleek and clean, but more of an allusion to a dystopian parallel world. Weather or not you personally prefer the look is obviously up to you but, sitting beside my Asus G73 and my Alienware M15x, I thought they fit in nicely.

As stylish as they may be, if they don’t sound any better than an average set, they’re largely pointless, especially at that price point. Thankfully, they do perform extremely well at normal volume levels. Mids are nice and clean, highs are crisp and playful, and the bass has a significantly higher fidelity than what you can get from standard laptop speakers. That said, their most attractive quality isn’t quite as easy to articulate.

Most audio equipment has really stark directionality; rotating your head or moving around a room will quickly demonstrate that. Cubik, on the other hand, has a very large, open soundscape. They create an aural bubble within which everything sounds roughly the same from any given position. It’s really an odd thing to hear, and I had several of my friends come in to try it just so I could prove to myself that I wasn’t crazy.

This bubble of sound is probably caused by the the mini-subwoofers on the back and the two tweeters that point directly up at the listener’s ears. In that sense, they are engineered much better than your average desktop stereo setup.

Unfortunately, the generally solid performance and wow-factor cannot make up for a few key frustrations. While at moderate volume, Cubik performs admirably, but if you have some friends over and want to watch an action flick, or need some oomph for a room party, you will be sorely disappointed.

Cubik lacks that tight, low-end bass that you get from larger, dedicated subs, and at higher volumes, even the included mini-subwoofers simply cannot keep up. Explosions and gunshots will either come off as dull and flat or cause the audio to tear a bit. Either way, for a set that costs $200, that isn’t really something I can forgive.

Additionally, while it’s great that the option for USB input is included, the fact that nothing is supported — no TOSLink, no 3.5mm, etc. — is really underwhelming. Versatility is highly important and the option to use this set with any source could have made it a much stronger contender.

Beyond that, all cables are either proprietary or not user-replaceable. Again, a few simple design oversights dramatically limit the long-term viability and utility of this set is capped far lower than it should be. At this price level, consumers should expect more.

If the design alone is enough to win you over, then I highly recommend them. If not, you should probably look at a more powerful system from someone else.