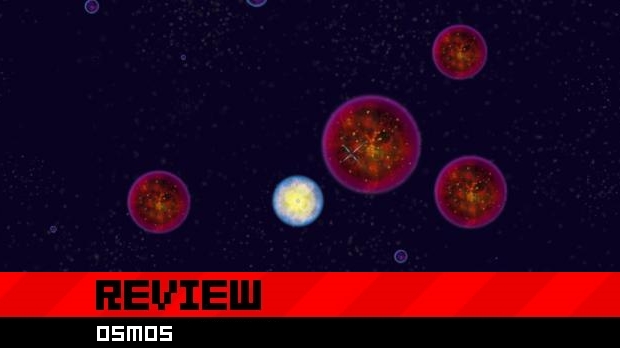 Upon reading the title of this post, I assume you will have one of two reactions:

1. What the hell is Osmos what is this crap why are you wasting my

2. Didn’t that game come out, like, almost three months ago?

To which I would say, in order, “shut up” and “yes.” Osmos did indeed come out during the middle of this August, but we never got around to reviewing it. A few days ago, however, I received a review copy. But why bring the game up now, so far from its initial release date?

Because it’s really, really good and you should try it out. That’s why.

I’m a lazy enough writer that I’ve used the phrase “I find it hard to describe (game X) in words” more than my fair share of times, but I can’t help but throw it out once again when considering Osmos. After a few minutes of playing, I was tempted to write it off as a 2D, osmosis-based version of Katamari Damacy. A few minutes after that, I thought it was a straightforward puzzle game. Then, an action title. Then, a sci-fi version of billiards, for Christ’s sake.

The beauty of Osmos is that it constantly defies classification while still remaining true to its core design principles. The game revolves around two very basic mechanics, and while it enhances and changes them throughout its thirty-odd levels, everything the player experiences remains grounded thanks to the game’s devotion to exploring the implications of those basic mechanics.

Firstly: you are a blob, and if you touch a smaller blob, you absorb it (thus if you touch a larger blob, it absorbs you). Secondly: to move, you must shoot a portion of your mass behind you, thus propelling you in another direction at the expense of some of your size.

As mentioned earlier, the game initially plays like a simplified version of Katamari Damacy, where the player is asked to absorb progressively larger blobs until you become the biggest blob in the Blob Kingdom. This is marginally satisfying, but ultimately shallow. It’s not until a few levels later that the purpose of these initial stages become apparent: they serve only to educate the player about how the blobs physically react on the playing field, and how to go about using them.

Before you know it, the game starts throwing curveballs. Black holes appear, swirling the contents of a level around in a constant orbit. Just when you’re comfortable with relatively sparse levels that give you the time and freedom to gain girth at your own pace, the game throws you into a stage packed to the brim with gigantic corrosive blobs that restrict freedom, but also force you to traverse the level in an entirely new and unusual way. A few minutes later, you’ll be thrust into a level with only three or four tiny blobs, turning the game into an exercise in restraint and conservation of movement.

A game like Osmos derives its strength not from the act of haphazardly throwing different powerups and enemies at the player, but from its ability to force the player to think in entirely new and unpredictable ways. The mechanics gradually introduced throughout Osmos exist not simply to titilate, or relieve boredom: they ask the player to look at the things they’ve learned from a completely new perspective, to either gain new skills entirely or use the ones they have in an entirely new way. The central absorption and movement mechanics always function exactly as the player predicts they will, but everything else shifts and distorts the player’s understanding of the game rules in consistently interesting ways.

Yes, the game may get fist-poundingly difficult at times, but it never actually feels unfair: every new challenge is simply an extension of those two initial premises, with no arbitrary additions or subtractions. The levels themselves never feel frustrating.

Certain aspects of the overall design, however, do. For some reason, every keyboard shortcut requires use of the ALT button, which doesn’t sound like such a big deal until you reach the final few, consequence-heavy levels and find yourself constantly needing to restart the level or randomize the blob layout everytime you die (which, in those stages, can happen as often as every ten seconds). Why ALT+C? Why not just C? Shortcuts and menus notwithstanding, the entire game is controlled solely with the mouse — I wasn’t exactly in danger of hitting any keys on accident.

Speaking of the mouse-only controls, I would very much like to have words with whomever decided that it’d be a good idea to make the player’s blob — otherwise known as the avatar which always remains the focus of your attention — open the pause menu everytime the player clicks on it. The words in question would be, “please do not do that anymore.” As I chose to move my blob around the map by clicking the area directly around it, I frequently found myself clicking just a smidge too close to the blob itself, summarily pausing the game and killing the mild sense of flow I was getting from the decidedly laid-back, sort-of-Zen-I-guess audiovisual aspects. By the time I reached the game’s final level, I’d accidentally opened the pause menu enough times to predict the exact pitch and volume of the angrily growl that would exit my throat before it even did.

Osmos is more than worth its ten dollar asking price. The controls may irritate you and the game’s attempt at a Zen aesthetic may come off as a little dull, but it nonetheless remains a constantly surprising, wonderfully unclassifiable, and, ultimately, damned satisfying piece of gaming.