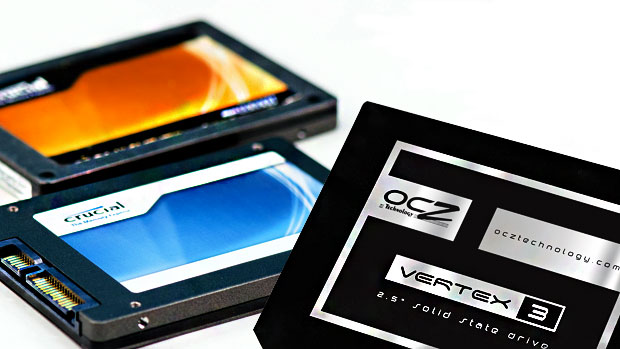 Even among solid state drives, there is a wide range of performance despite the large improvement over traditional hard disk drives. A couple weeks ago, I reviewed the OCZ Solid 3 ($167.49) and it turned out to not be the fastest, nor the most stable.

Today, we’re going to look at two different drives in particular, the OCZ Vertex 3 and the Crucial M4. Whereas the Vertex 3 is reportedly faster across the board, the Crucial M4 is known for its stability and consistency.

EDIT: I’ve updated the Crucial M4’s firmware from 0002 to 0009. I sincerely apologize for this mix up. Because I received my test system from NVIDIA, I made the (careless) assumption that the latest firmware was installed. It was a mistake I do not intend on making again, and I thank you all for your understanding.

If you aren’t familiar with the difference between solid state drives and hard disk drives, here’s a quick catch up. Hard disk drives consist of several magnetic “platters” that spin around and record data by changing the magnetic signature on each platter. Because of this method, the speed at which the drive can store and retrieve information is dependent on the velocity those platters spin (normal “gaming”-grade hard drives rotate at 7200RPM or faster), so retrieval is still relatively slow.

Solid-state drives work more similarly to the RAM in your computer than a HDD. The biggest difference is that unlike HDDs, SSDs do not contain any moving parts (so no rotating platters), meaning they are completely silent. In addition to that, they have lower access times and latency as well as being much more resistant to physical shock. However, this comes at a price: SSD memory is much more expensive per GB than the HDD alternative.

A little more bad news: in general, hard drive speed has no bearing on online play, and users will see little to no improvement in gameplay other than perhaps faster load times (if the change is even noticeable).

OCZ’s third round of SSDs consists of three drives: the Vertex 3, Agility 3, and the Solid 3. Out of these, the Vertex 3 reigns supreme in performance, and as a result, has a higher price.

The OCZ Vertex 3 ($209.99) comes in several different capacities (60GB, 90GB, 120GB, 240GB, and 480GB). It also boasts multiple awards, including “recommended buy” in 2011 from Tom’s Hardware and StorageReview.com’s Editor’s Choice award. While the Vertex 3 is sold in multiple sizes, we will be taking a closer look at the 120GB drive in particular today.

Sadly, I couldn’t find a fancy picture that has all the in-depth specs like I could with the Vertex 3. Although the M4 isn’t as fast as the Vertex 3, it has a much higher IOPS count for 4kb files. Just like the Vertex 3, the M4 was also awarded by Tom’s Hardware as a 2011 recommended buy, as well as claimed to be the best 2.5″ SSD on the market by SSD Review.

For this review, I used four different benchmarking tools: AS SSD, ATTO, CrystalMark, and HD Tune Pro. Each of these benchmarks were run ten times each for consistency, and the results were averaged together.

All tests and games used for this review were done on the following system, which was provided by NVIDIA:

So after the retest, it’s pretty clear which won here. Even though the read speeds are similar (M4 is 10MB/s faster still), the write speeds are an entire 85MB/s higher than the Vertex 3. With the write speed just as fast as the Solid 3’s read speed, it sadly outstrips both the Solid 3 and the WD Black by a landslide. 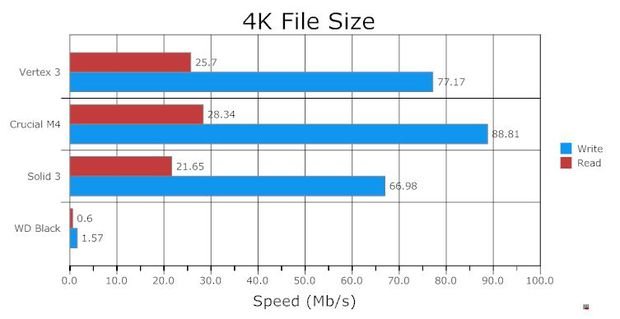 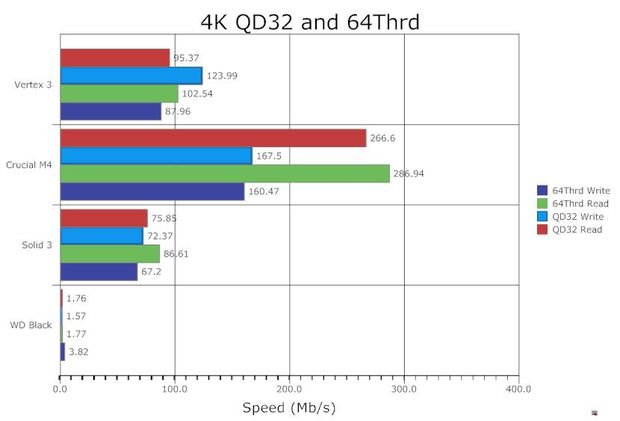 4k files are really where the solid-state drives begin to shine, and where the Crucial M4 goes supernova. To clarify what the second graph represents, 64Thrd are 64 simultaneous requests for 4k of data, and 4k QD32 means 4k 32 queue depth meaning there are 32 requests one-by-one for 4k of data.

Both of these stats contribute toward load times, and perhaps take one of the largest roles in deciding how well a hard drive stores and retrieves information. 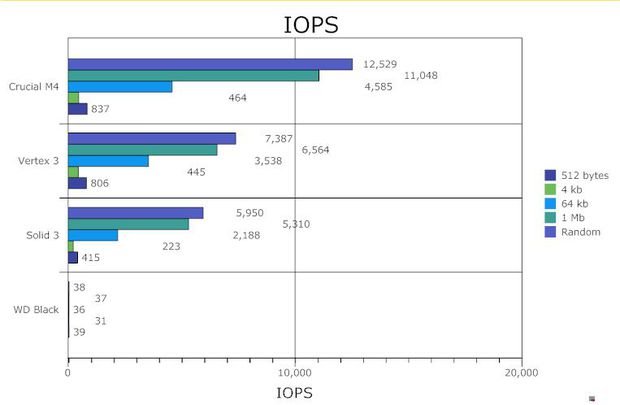 This area is, again, where the solid-state drives really stand out. Because HDDs work on a system of rotating platters, this is where that disadvantage truly begins to kick in. As the read/write function is dependent on the speed of the moving parts, the IOPS (Input Output Per Second) and the access time have to wait for the next revolution.

It’s almost like the firmware strapped a rocket to the M4. Although the score was higher than the Vertex 3’s before (575), it’s an entire 200 points higher, which is no small feat!

For my “real-life” tests, I used five different trials: the start-up time for Adobe Photoshop CS5, Starcraft II, Windows 7, and the load times for Portal 2 and Arma 2. For CS5, Starcraft II, Portal 2, and Arma 2, each trial was started from the execution of the program until it was done loading. Windows 7, on the other hand, was timed based off when the splash screen appeared until the log-in screen finished loading. Similar to the benchmarks above, each test was run ten times each and the result shown in the graphs is the average of them all.

In contrary to my previous review, the Solid 3 didn’t lose out to the WD Black in this test. However, it didn’t win either, coming in a tie. Moving on to the Vertex 3 and Crucial M4 though, the M4 is starting to shake things up and sneaked ahead of the Vertex 3 by a mere .08 seconds.

Based off our earlier results, I was honestly expecting the M4 to completely destroy the Vertex 3 in this and the rest of the real life tests. Don’t get me wrong, it was still a five second improvement from before, but it still drags behind the Vertex 3 by a little over two seconds.

Based off a recommendation comment I received in my review for the OCZ Solid 3, I decided to give Arma 2 a shot, since it’s supposed to be hard-drive intensive. For this test in particular, I decided to gauge the launch time of the Benchmark 1 scenario.

Turns out, it was pretty close, except for the WD Black which trailed behind, as anticipated. Even after the retest, the Crucial M4 didn’t budge from this mark, which left me pretty shocked.

Now that’s what I’m talking about! Even if it’s just .26 seconds faster than the Vertex 3, the Crucial ended up launching Starcraft II the fastest.

While I had some stability issues with with the OCZ Solid 3, I’ve had no problems or horror stories with the Vertex 3. That said, when directly compared with the track record of the M4, I decided to look into the stability of the two a little closer.

To do this, I decided to examine the speed consistency that each drive had through HD Tune Pro:

As you can see from looking at the graphs, the Crucial M4 makes a much lower rating on the Richter scale than the Vertex 3, showing much more stability and increased drive consistency overall. After checking my Vertex 3 for any errors or partial hardware failure, it was determined that its health was fine, and there were no detectable problems with the drive. Between the speed and the reliability the Crucial M4 offers, it’s pretty clear which is the best choice between the two.

While the Vertex 3 does offer great speed, it simply just doesn’t stand up to the Crucial M4 in the benchmarks. However, when taking the real life tests into account, the Vertex 3 does in fact have some merit, as it beat the M4 in several of the tests.

However overall, my recommendation has to go with the Crucial M4. It offers greater speed, reliability, and eight more gigabytes to top it off for the OS! Even though the WD Black didn’t hold a candle to the SSDs in the benchmarks, it should be noted that it wasn’t that far behind launching applications and load times. So if you are in the market for a storage drive (and you should at least have one if you are in the market for a SSD), the Western Digital Caviar Black is an excellent choice.

Another option I didn’t discuss before is the OCZ Vertex 3 MAX IOPS ($248.99) drive. While I haven’t personally reviewed this drive, it increases Random Write IOPS for 4KB from 60,000 IOPS to 75,000 IOPS for a $40 price increase. If you have some extra money to drop on it, it would be an excellent (and relatively cheap) performance increase from the regular Vertex 3.