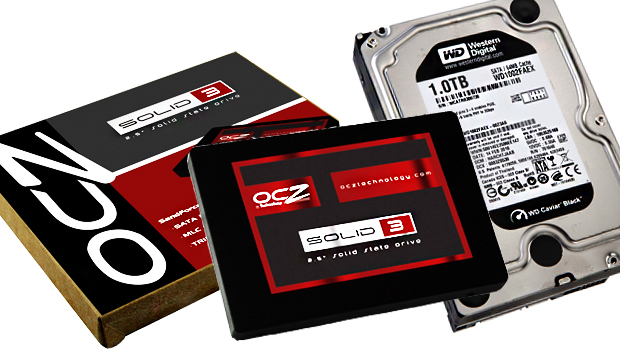 A lot of people have been asking whether solid-state drives (SSD) are up to par, if they’re worth your money when compared to a traditional hard disk drive (HDD). Some critics will even go as far as saying that an SSD is the most significant hardware upgrade you can make, and to gamers that sort of benefit is obvious. That said, the barrier to entry for SSDs is high and value-minded gamers can buy ten or twenty times the hard drive space by going with the older HDD technology.

Today, we’re going to take a closer look at OCZ’s Solid 3 120GB SSD and determine if its rather high price tag is justified.

In case you aren’t familiar with the difference between solid-state drives and hard disk drives, here’s a brief overview. A normal HDD is made of several magnetic disks that spin around and record data by changing the surface of those disks, and capacity increases as disks, or platters, are added to the drive. Because of the method by which the HDD stores information, retrieval of said information is dependent on the speed at which those disks are spinning (normal “gaming”-grade hard drives spin at 7200RPM or higher), so retrieval isn’t instantaneous.

Solid-state drives are completely different in that they behave somewhat more like the RAM in your computer. These drives have no moving parts (no rotating platters), which means they are completely silent. In addition, they have lower access times and latency and are more resistant to physical shock, but this comes at a price: they’re typically much more expensive per gigabyte than a hard drive.

Nowadays, SSDs use NAND-based flash memory, which uses transistors that closely resemble a NAND gate used in many circuits. This unique architecture allows SSDs to have seemingly instantaneous access times and has allowed gamers to relieve the common hard drive bottleneck.

OCZ’s third generation of SSDs consists of three premier drives in descending order of performance (and price): the Vertex 3, the Agility 3, and the Solid 3, which we will be covering today.

However, you will rarely (if ever) reach the max speeds, so it is generally better to gauge performance off the regular speeds, which are quite lower than the max speeds. Although the sequential read speed is about 40MB/s higher than my Western Digital Caviar Black 7200RPM HDD, the Solid 3 actually lost in terms of sequential write speed, which surprised me a little.

For some real-life performance tests, I decided to evaluate start-up times for Windows, Photoshop CS5, and StarCraft II, and load times for Deus Ex: Human Revolution and Portal 2. All these times are averages of ten trials each and results vary somewhat due to human error. It should also be noted that each record was taken starting from when the splash screen appeared on the screen until the application was done loading. Of course, lower numbers are better in all of these boot and load times, so don’t get confused.

Upon seeing the Photoshop CS5 results, I was stymied. Seriously, I ran both tests twice just to make sure I wasn’t screwing something up. As it defies every other test, I do not have a clear-cut explanation as to why this happened. However, there are two possibilities that come to mind.

First, SSDs are known to have poor, random read/write times, though a lot of this has been fixed in newer versions such as the Solid 3. Second, my SSD is over 50% capacity, which may be slowing down performance slightly. Again though, I was under the impression this rule does not apply to SSDs. Both possibilities should be noted, but are not concrete answers as to why this happened.

On the other hand, the Windows 7 results do follow the trend that the Solid 3 outperforms the WD Caviar Black. By over halving the Windows boot time, it is actually a true example of how the SSD dominates over the HDD.

For the next test, I decided to try StarCraft II, and while the difference was minimal in my opinion, it was a decent gap.

While it was only about a half-second difference in launch times, the OCZ Solid 3 did come out ahead. However, as I will discuss later, hard-drive access time plays little to no part in the speed of online games, other than the time it takes to launch the game or load new maps.

Next up are load times for Portal 2 and Deus Ex: Human Revolution.

The OCZ Solid 3 beat the WD Caviar Black by at least a full second in both cases. While this may not seem a lot, the small amount of time adds up pretty quickly (especially if you suck at DXHR and die a lot like me).

The HDD’s times were really sporadic as well, with times deviating by about a half second from the average in both games, while the SSD was much more consistent, hovering within .01 seconds of the average. However, I have to note that the time difference wasn’t very noticeable in general. So while the SSD was faster in the end, it didn’t drastically change my game experience.

I dealt with a lot of frustrating stability issues when working with the OCZ Solid 3. The drive would blue-screen my computer five to seven times a week, and initially had some trouble installing Windows 7. After speaking with customer service, they advised me to install new firmware.

Unfortunately, you could not install the firmware if you were using the SSD as your primary drive; this turned out to be not as much of an issue for me, as I could switch over to the WD Caviar Black. After running their “toolbox” software on the HDD, the computer would BSOD whenever it started downloading the patch. So yet again, I went off to customer service, and they directed me to a post on their forums where I could make a bootable disk to install the software. It worked, and my BSODs became somewhat of a thing of the past. This entire process took me about two weeks to get through because of their slow responses, and I wondered why they didn’t just include the solution that worked for me on the actual website, since it was pretty simple.

The OCZ Solid 3 SSD offers a huge increase in performance in most aspects of computer performance over most, if not all, HDDs currently out there. For gaming, however, it should be mentioned that a hard drive (or solid-state drive) has no bearing on online play. The only thing it may improve is load times between maps, which will be negligible on games that use an Internet connection. While you will see an improvement in single-player games, I don’t believe the increase in performance necessarily justifies the price tag for most gamers.

Even if you are looking into getting a solid-state drive for that extra boost anyway, I do not recommend the Solid 3 for multiple reasons: stability, performance, and competition. While the stability issues I encountered may have just been bad luck, they did leave me with a bad impression.

In terms of performance, the Solid 3 vastly outperformed my HDD in a lot of ways. That said, the HDD and SSD’s scores for sequential read weren’t so different that I believe it’s worth the price difference. For $30 more, you can get the OCZ Vertex 3 ($199.99), which offers even better performance and stability than what I experienced with the Solid 3. My review for the OCZ Vertex 3 will be up relatively soon, so stay tuned!

EDIT: Sorry!!! I definitely meant to include my system specs, but they just slipped my mind. I apologize. And without further ado…