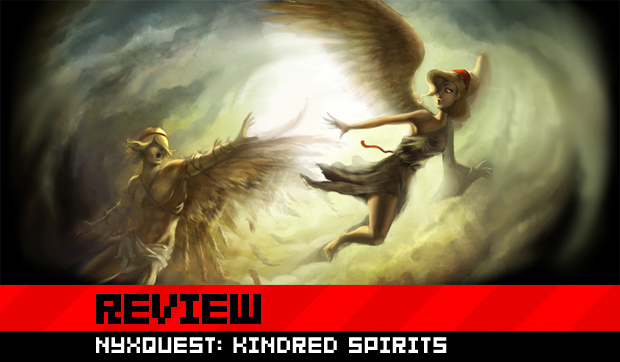 NyxQuest: Kindred Spirits (formally known as Icarian: Kindred Spirits) joins Braid and Lost Winds in the ever-evolving “platformer 2.0” movement that’s been picking up steam of late. Like those two games, NyxQuest comes from a relatively small team, and is clearly a labor of love on the parts of its developers. Sadly, love isn’t always enough to make a game worth playing, especially coming from developers with little money and manpower. Where big name devs can get by on fueling a game with humongous well paid teams, smaller devs need to inject talent and ingenuity in the spots where they lack the cash.

So, does NyxQuest have enough love to make up for its humble origins? Hit the jump to find 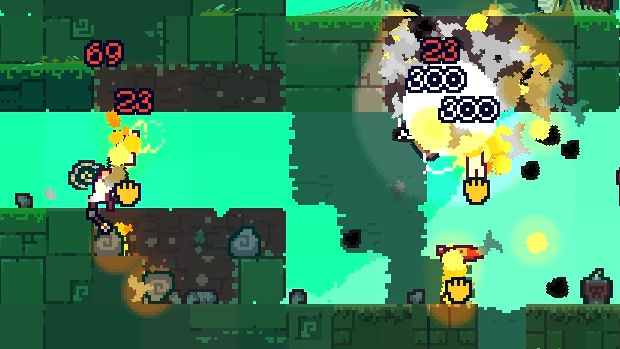 Going on the name alone, you probably have no idea what NyxQuest is about. That’s too bad, because the game actually has a pretty cool little story. Anyone with a passing knowledge of Greek mythology probably knows the story of Icarus, the man who flew too close to the sun and suffered the consequences. NyxQuest tells us the next part of the story. It does so in a timeless, humble style befitting of the subject matter. The focus here is on a minor deity named Nyx who comes to Earth to rescue Icarus from a vengeful titan, to find that the whole planet’s pretty much fucked. From there, she sacrifices herself to the hilt, gains the favor of more powerful gods, and witnesses one of the most violent sunsets in videogame history.

Overall, it’s a serviceable scenario, but it’s not going to change anyone’s life (like Braid did for some people). It’s involving and atypical enough to keep you interested, and that’s all. The same can be said for pretty much all of the game’s cosmetic features. NyxQuest is a game that doesn’t take a hell of a lot of risks when it comes to graphics and sound, but the craftsmanship here is unmistakably high. 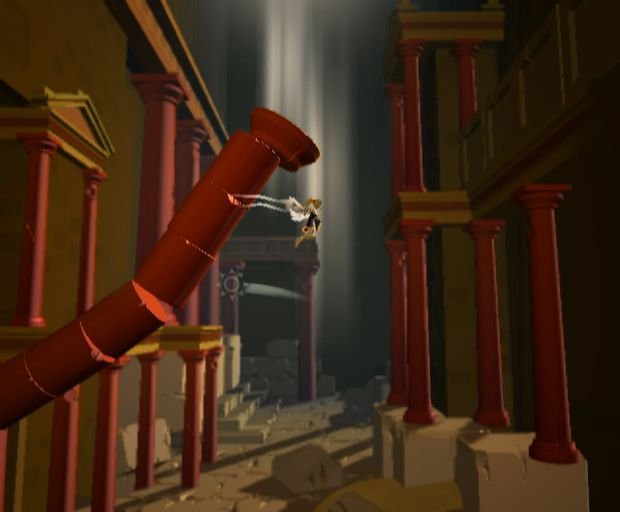 The game’s developers were wise to keep the camera zoomed out pretty much all the time, which is a must for most lower budgeted Wii games. The art direction is solid, and is is consistently effective in evoking a feeling of mystery and isolation. The broken columns and half buried statues set to a dry desert backdrop are quite picturesque. They are also something gamers have come to expect these days in their Greek myth based gaming experience, and wont do much to turn heads. Still, they look nice. That’s what counts.

The game’s music is a little less compelling, mostly because it just isn’t there most of the time. I’m not sure if it was intentional, or if the game’s development team just couldn’t afford to buy more music, but the length of the game’s total soundtrack couldn’t be much longer than ten minutes. Sound-based cues pop up here and there, signaling that you are entering a new area or that an enemy is about to attack, but the rest of the time, there is very little music going on. The sparse score works to keep the game feeling “classy”, but sometimes it causes the experience to be a little under-stimulating. 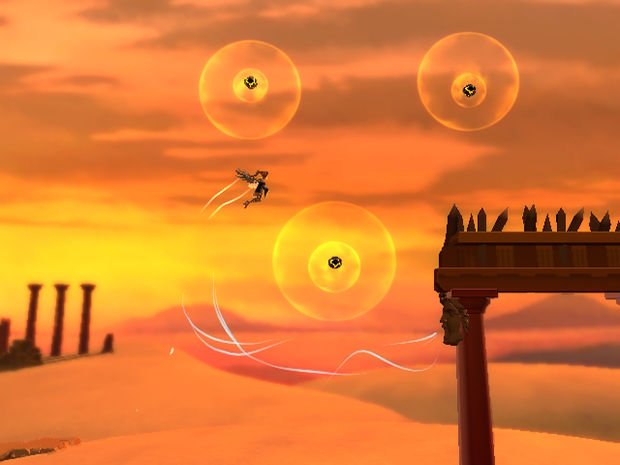 This is especially problematic during the first hour or so of the game, when the gameplay consists of pretty much the three things; running, jumping, and moving blocks around with the Wii’s IR pointer. These are all fairly cool things, but they don’t hold a candle to how awesome things get in the last part of the game. But I’m getting ahead of myself.

You start off with just the ability to run and jump, though you can jump up to five times in mid air, which is something only one other Greek kid on the Wii has done so far. A little after that, you learn to glide after a jump for a brief period of time, which adds an important element to your platforming strategies, but it’s still far from mind blowing.

From there, the Wii remote’s unique pointer functionality becomes more intrinsic to the experience, and things get a lot more interesting. It starts with Zeus speaking to you via statue-phone (as popularized by Clash of the Titans) to let you know that you can now hit switches and move stuff around with the Wii remote’s IR pointer and the B button. Depending on the size of the object, you can either carry stuff anywhere you want, or just lifted it a a few feet of the ground. The physics of the block’s interaction with gravity and environmental structures is spot on. When simultaneously moving blocks and jumping around on them, NyxQuest feels a bit like Boom Blox: The Platformer — a game that I now wish existed. 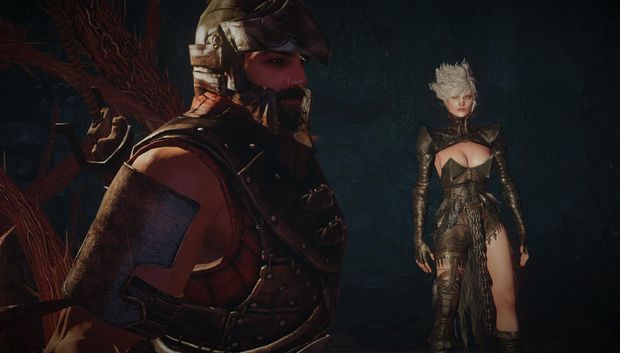 Holding up blocks while you jump on them is really just a taste of what NyxQuest does best; simultaneous multi-tasking. As the game progresses, other gods give you the ability to pick up fire, control the direction of the wind, and shoot lightning anywhere on-screen. Your Wii-remote hand effective becomes your “God-hand” — controlling all of your godly powers, and your nunchuck hand becomes your “Nyx-hand”, — the hand you use to guide your ever-vulnerable protagonist. This forces you to carry blocks, shoot lightning, break barriers, and create wind-tunnels with the IR pointer while keeping track of Nyx and keeping her out of danger with the nunchuck’s analog stick at the same time. It sort of feels like playing two games at once, or like playing a co-op game by yourself with a controller in each hand.

In one semi-boss battle, you have to fight off two fire breathing serpents requires loads of left-brain/right brain thinking. During this fight, Nyx’s only place to stand is on some breakable blocks. Everywhere else is killer-sand. The serpents attack by shooting either one black fireball, three black fireballs, or one red fireball. The only way to damage them is to grab the red fireball and smash it into them. While you try to do that, you need to make sure Nyx dodges the other fireballs, keeps from falling into the sand, and hit switches with your God-hand to make more blocks fall into place. Anddon’t let the blocks hit you. That will kill you too. 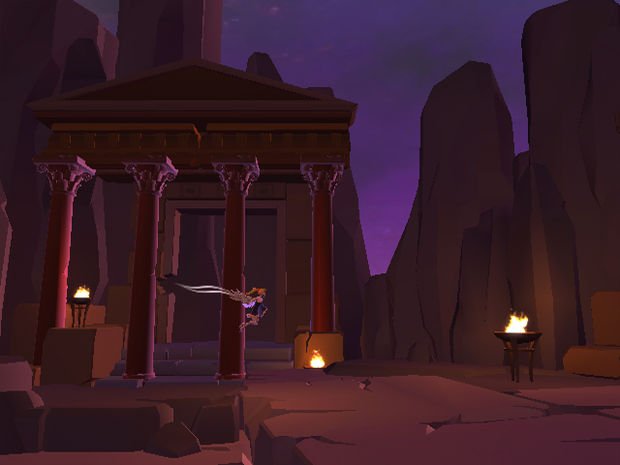 This is just one of the many way the game challenges players to do more than the standard 2D platformer routine. There is also a killer stealth section, Irritating Stick– style, “don’t touch the walls” fire baby-sittiing, sand surfing, and an awesome twenty minutes towards the end where you get to gleefully blast every enemy on-screen with lethal lightening bolts (a delightful revenge for Nyx’s more defenseless first hour with the game). The feeling one gets from play as yourself, a God on your couch, and as Nyx, a defenseless goddess at the same time is really something special.

I finished the game in just under four hours. After that, it was another four hours to collect all the Easter eggs and unlock the bonus level. Eight hours of cosmetically solid, wholly original gameplay is worth the ten bucks in my opinion. There are a few more gripes. The enemy selection is a bit sparse (just three or four “real” enemies and a few environmental hazards) and last boss is pretty anti-climactic, but there are enough surprising, thoroughly unique parts of NyxQuest to make up for those minor flaws.

I still feel like I haven’t done the game justice, but there is just so little to compare it to. You could say it’s like a 2D Okami, except the screen doesn’t freeze when you use your celestial brush, or maybe more like complex and multifaceted than Lost Winds, except with more lightening and fireballs, but neither of those comparisons are quite right. I guess you’ll just have to play the game and see what I mean yourself.

Score: 8.0 (8s are impressive efforts with a few noticeable problems holding them back. Won’t astound everyone, but is worth your time and cash.)