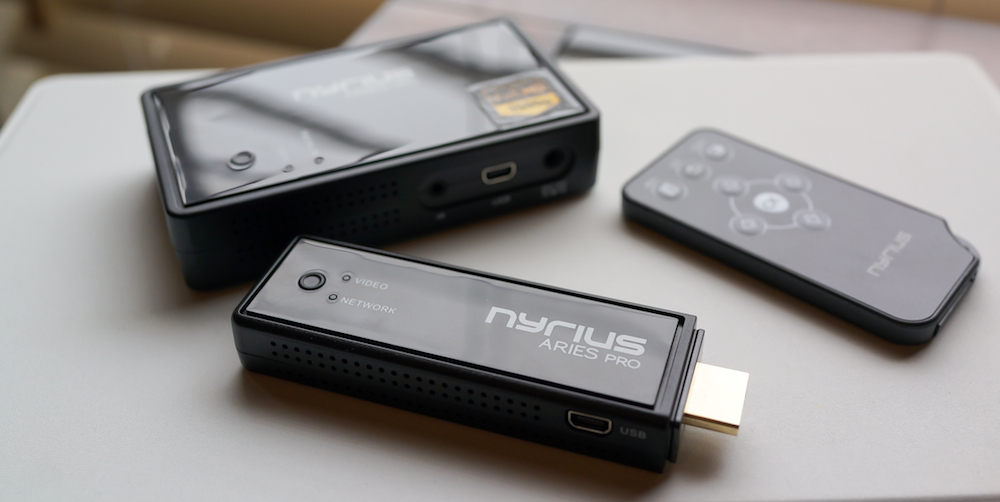 Connecting your PC (or game console) to your television isn’t necessarily difficult, but the cabling can be a bit of a hassle. The HDMI outputs on better laptops and most GPUs make it easier by sending both video and audio over one cable, but an optimal setup would still require Ethernet cabling as well. And if your PC is far away from your television, the situation gets a bit messier.

What if you could just leave your PC in its room and send the audio and video signals wirelessly? Nyrius’ Aries Pro lets you do exactly that. I spent a week with the set in my home, trying it out on console gaming, PC gaming, and a bit of web surfing. Read on for our full review

The Aries Pro Wireless HD for Laptops is a streaming solution that sends 1080p HD video and its accompanying audio wirelessly, letting you use your PC or laptop (or console) without having to bother with rewiring. A transmitter the size of a pack of gum has an HDMI port on its end, and this is to be plugged into any video source. A small box about the size of a deck of cards acts as a receiver. Its HDMI port lets you run a cable to any television or monitor to receive the streamed A/V signal. The transmitter is powered by a USB cable, while the receiver is powered by a 5V DC power cord.

My house is a mess of game systems. Now, I’m not bragging, but I have game systems everywhere. In multiple rooms — bedroom, living room, offices —  you’ll find both current and next-gen consoles as well as debug/test kits, and that’s not to mention my work and gaming laptops. My home office is where most of them reside, but they never seem to stay completely together. I can’t tell you how often I’m carrying systems around my house to get work done.

I’ve just come off a week-long marathon gameplay session for Square Enix’s Lightning Returns: Final Fantasy XIII for an upcoming preview and review, so I had moved my PS3 test kit into my living room to get comfortable with this lengthy RPG. In getting back to work the following week, I wanted to return to my office where I could take notes during gameplay. The Aries Pro let me simply unplug the HDMI cable from the PS3 kit and plug in the transceiver instead of moving the system. The USB power was supplied by one of the PS3 kit’s front ports. Back in my office, which is about 20 feet away in the corner of my house, I turned on my office gaming television and used a DualShock 3 controller to play wirelessly.

It works like a charm. The television showed that it was receiving an HD signal, and my audio receiver showed that it had locked into a Dolby stream. I loaded up the game and found that it looked pretty good for a signal that had traveled across a couple of rooms. While not pristine like a direct HDMI connection, the gameplay still looked sufficiently HD, with even the smallest text remaining readable. Dark scenes had the signal quality occasionally dropping, making it look more compressed. But, for the most part, I was totally fine with the compromise. I played for about two hours, and I found that after awhile I completely forgot that I was playing over a streaming connection.

I was impressed with the responsiveness. While I have no doubt that some kind of signal lag is introduced, it had no effect on my gameplay of Lightning Returns, which has a new battle system that favors action over menus. I noticed no lag in a couple of hours of play. Nyrius claims there is “zero lag” with its solution.

In a shorter-range test, I had the Aries Pro streaming across my office to send a signal from my Wii U to my office television. I found that shorter distances had the video quality improving greatly. From about 10 feet away Super Mario 3D World looked almost indistinguishable from a direct HDMI connection. We’re talking absolutely flawless — no stuttering or pixelization at all.

More importantly, Super Mario 3D World played perfectly. I had no problem with any delays as I made precise jumps and turns in a few test levels. Very impressive.

Couch surfing and playing through my Steam game collection from my couch had me really seeing the appeal of the Aries Pro. I have a pretty long living room, but the connection had no problems keeping up. In the process of going through several games and websites, as well as watching some streaming video, the stream never broke from its highest quality. The experience was completely free of issue.

For a range test, I was able to use my long living room and line of sight from adjacent rooms to test Nyrius’ claims of a 160-foot range for the Aries Pro. It may be that it had to pass by three large clusters of wireless electronics, but the best I could get was about 60 feet before the signal dropped intermittently. The signal had no problem going through walls for this distance, but when I tried to push beyond 60 feet, or add another room between the transmitter and receiver, the signal would drop out. But even at 40 feet the signal was fairly clean between my laptop and my office television. For some reason I got even better results from my laptop than I did the PS3.

I found that below 25 feet seems to be a sweet spot for the Aries Pro. Again, in my living room and in my office, the streams were always flawless. Latency was never a problem for any of the games I tried, either. This should be more than enough for most living rooms.

My bedroom television is connected to a Roku box for watching streaming content, and I make do with that, leaving my only DVR in the living room. Using the Aries Pro, I was able to catch up on shows in bed without having to run any cabling. Of course, changing channels meant that I had to go to the other room, but the streaming video never faltered.

If you had a ceiling-mounted projector, the Aries Pro would be an ideal product. You could have a clean installation, never having to worry about HDMI cable runs up your walls and on your ceiling.

Yes, the HDMI signal is compressed or compromised in some way, and the range isn’t quite as great as advertised, but the Aries Pro manages to impress despite these issues. Again, for the most part, the video signal is good enough that I forgot that I was playing on a streamed connection. And I still can’t believe that there’s no perceptible lag with the Aries Pro when it comes to gaming, even after a week of using it.

If you need to send HD video and audio wirelessly, the Aries Pro is an excellent solution, and at about a $250 street price it’s quite a bit cheaper than any of the professional products you’d have to buy to get similar results. Highly recommended.