Come back with your shield, or come back on it

[Disclosure: Nvidia has provided Destructoid with a number of computers for PC game review purposes in the past. If you feel that may make our reviews of any of their products “biased” or “paid off,” you are welcome to.]

The number of handheld devices hitting the market are becoming increasingly difficult to keep track of, a situation made all the more overwhelming by the continued erosion of the boundary between smartphones, tablets, gaming devices, and machines built solely for the purposes of showing your friends that “Blurred Lines” video.

Several oddities have cropped up in this maelstrom of technology, one of which is the Nvidia Shield. Joining the Razer Edge in the “almost shockingly niche” category, this Android-powered, Steam-streaming, undoubtedly powerful system is heavy, expensive, and focused on a unique brand of gamer — a cocktail of concerns that has led to many a cynical attitude toward it.

I was cynical. Hopeful, as I am for all new gadgets, but cynical nonetheless. Having spent a good deal of time with the Nvidia Shield, however, I absolutely love the thing. It’s still heavy, it’s still expensive, and it’s certainly going to appeal to a select few. Those few, however, will adore it. 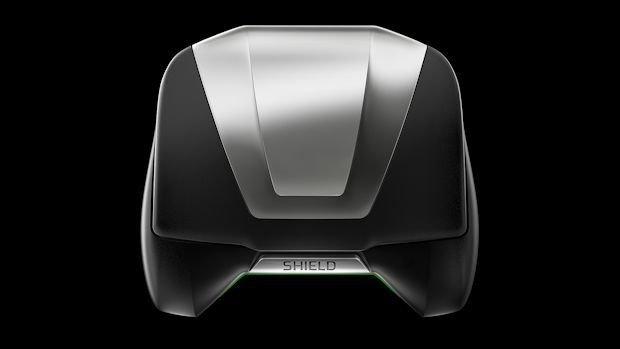 The first thing you’ll notice about the Shield is how it refuses to compromise on the things handheld gaming systems most commonly acquiesce. This is a big lump of plastic — it can just about fit in the pocket, but you’ll look like you’ve got the world’s worst thigh tumor. It’s chunky, and possessed of not inconsiderable weight, but that’s because it’s a screen sat atop a full-fledged, console-level controller.

There’s very little difference between it and an Xbox 360 controller, with its full-size, clickable dual analog sticks, face buttons, bumpers and triggers on the shoulder, and D-pad. The center of the controller also features a large button to access Tegra Zone, a back button, a start button, an Android home button, and a button to bring up volume controls. The obvious downside to having a full-on controller as a handheld is that you’re, well, carrying a full-on controller around with you. The upside, however, is you’ve also got the most game-capable handheld system ever made, able to do things other systems simply can’t.

Where it’s taken the PlayStation Vita over a year to get one first-person shooter to get it right, and even then it has to compromise, the Shield launches with a rock-solid alternative right out of the gate, one that doesn’t have to skimp on functionality in the least. While Dead Trigger isn’t exactly the most impressive shooter ever made, it’s nonetheless thoroughly enjoyable to be able to play a handheld FPS that actually feels like a real FPS, rather than a developer’s noble approximation. Games like Grand Theft Auto: Vice City, Sonic the Hedgehog, and The Bard’s Tale are all simply better here than they are on other Android devices, making the Shield a viable choice for those who want to try some of the souped-up Android releases, but aren’t into the idea of touchscreens.

This is also where the Shield humiliates its closest comparative system, the Ouya. Like Ouya, the Shield is a dedicated gaming system that gives you physical controls for Android-powered games. Unlike the Ouya, the Shield’s native controller is responsive, the system itself is incredibly powerful, games feel like they belong on it, and the system is overall just more pleasant to use. The Shield also has full access to the Google Play store, with a real Android OS that can run any app. Of course, games not designed specifically for Shield controls are awkward to run on a touchscreen with a great hunk of plastic hanging off it, but the fact it has the option to access so much more than the Ouya makes it a superior alternative.

Comfortable in the hands and capable of running games at their highest settings, Shield is a lot of fun to play around with — and this is not taking into account its ability to run a range of emulators for old games that you totally already have the physical copies of.

So far, my only real complaint with the physical design of the thing is the D-pad. The Shield really did elect to imitate the Xbox 360 controller in every way possible, including a rather dreadful and imprecise directional disc-thing. For the most part, it’s not too much of a problem to deal with, but it can make twitchy platform games more of a hassle than they should be, and it certainly doesn’t make playing something like A Link to the Past any easier.

Android games specifically designed for the Shield are thinner on the ground, and while more Tegra-powered games are appearing on the Shield Store, it’s going to need a lot more support. There are already some solid titles worth getting, with the aforementioned Dead Trigger, Vice City, and Bard’s Tale all good choices, but there’s a very real risk at this stage that the game’s library could suddenly dry up. I hope it doesn’t happen, but it’s not uncommon for a handheld system to become a software wasteland in a short span of time. 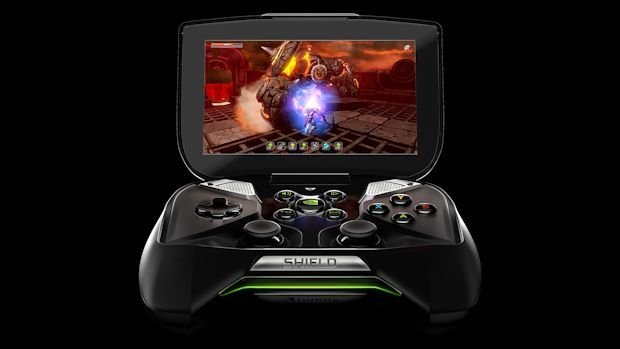 As well as the physical controls, the Shield’s screen supports multitouch, and you can even use the right stick as a mouse, bringing up a cursor for menu and web browsing. The left stick acts as a traditional console controller would, meaning you have three methods of input and can interact with the system as you would a console, PC, or smartphone.

The screen itself is a five-inch display that flips up and rocks a 1280×720 resolution. On top of such a large controller, it feels comparatively flimsy, but it’s all solidly built stuff. Games, naturally, look pretty damn good on the screen, and it does a more than adequate job of showcasing the Tegra-4 titles it was built to support. Audio is where I was really impressed, however. The two front-facing speakers are situated neatly above the face buttons and D-pad, and are capable of blasting out some damn loud sound. Handheld systems typically fail when it comes to providing sufficient audio, but these speakers are frankly incredible.

Another plus point is the battery life. Up to 20 hours of life can be gotten out of the system when streaming content from a PC, with a fair few hours of regular use available too. I want to say you’ll get at least five hours from the thing if you’re running games from the device itself, and altogether I found this machine working far longer than any comparable device.

As well as utilizing a full Android OS, the Shield also run’s Nvidia’s own little playground, TegraZone. Here, you get quick access to your Shield game library, as well the Shield Store, which collects those Google Play games customized specifically for Shield controls. Not all of these games are as elegant as they could be — some confusingly utilizing touch-only menus or requiring a full recustomization of the buttons (looking at you, Shadowgun Deadzone) — and some of them are straight-up garbage. Still, the titles worth getting are really worth getting.

TegraZone’s biggest feature, however, is its “PC Games” section, allowing users to stream games from their PC directly to the system using Steam. The feature is still in beta, something Nvidia warns users about with good reason. While a fantastic idea, it is currently unreliable, as well as a complete pain to set up. To even get a game to work, it requires diddling around on your PC first. You’ll need to make sure everything is updated, download TegraZone to your computer, run your desired games at least once, ensure you’ve a fast enough wi-fi router, and potentially fiddle with your Firewall and DPI settings. Even when you have everything in order, sometimes messages can pop up on your PC that interrupt streaming, or the connection could terminate for unknown and seemingly arbitrary reasons.

The beta status also limits the amount of games that currently work, and even among the ones that do, only a few work very well. Sleeping Dogs, for example, puts a mouse cursor in the center of the screen while it streams, and an attempt to move it using the Shield’s touchscreen will disable all controller input. The Elder Scrolls V: Skyrim is just laggy, and suddenly stopped working completely after only two successful attempts to get it running. Also, the less said about Half-Life 2, the better. 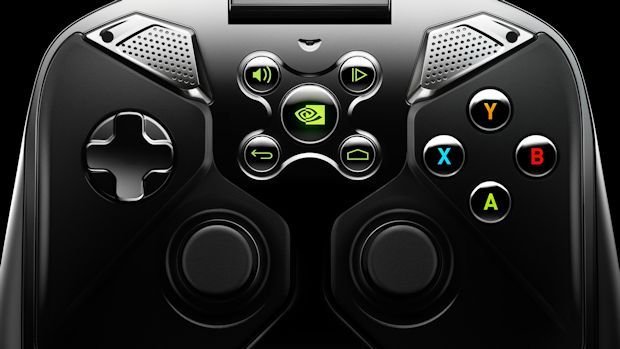 However, all complaints aside, when the planets align and the thing actually works as intended, it’s seriously impressive stuff. BioShock Infinite runs pleasantly, with only vaguely perceptible controller lag, while Borderlands 2 is almost perfect. If it weren’t for the mouse cursor issue, Sleeping Dogs would also be triumphant, looking lovely on the Shield’s screen and running at an impressively silky pace. When everything comes together smoothly, there’s definitely a magical quality to the process.

A lot of critics have been down on the Nvidia Shield, but I honestly don’t know why people have been so harsh. Games look great and run superbly, the controller is big but beautifully functional, and its wide range of features makes it superior to dedicated systems like the PS Vita in several ways. It delivers on several of the Ouya’s promises better than the Ouya ever did, and while the PC streaming is still highly problematic, it at least works, and one would hope its post-beta performance is far better.

Of course, it has to be said that it’s an expensive little toy, with an asking price of $299, and that’s really going to be the dealbreaker for a lot of people. For an Android system with an unsure future and no guarantee of continued software support, three hundred bucks is going to be too rich a gamble for most. As a piece of hardware, I feel the Shield fully justifies its asking price, but these days it’s so much less about the hardware, and more what you can do with it. That said, having full access to Google Play, and its range of emulators (most of which work with the physical control options) severely opens up what the Shield can do beyond its “official” uses. 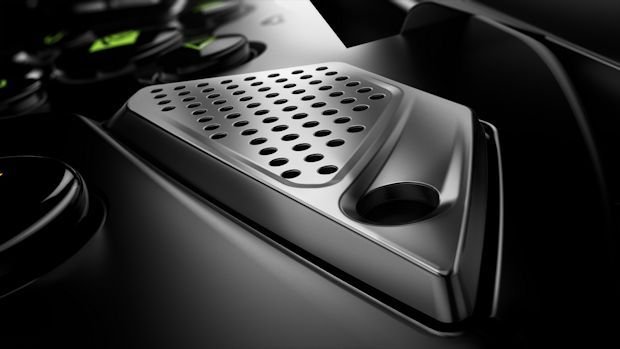 The Shield’s biggest feature needs to get itself out of beta soon, and it will need a lot more Tegra-powered games under its belt before it can be a real competitor. However, the device is quickly becoming one of my favorite handheld gaming systems to date, and as a generally big fan of portable gaming, that says a lot. It was never going to appeal to everybody, but to the right buyer, the Shield may be the perfect handheld.

You’ve just got to be the really, really niche type of buyer it’s gunning for.