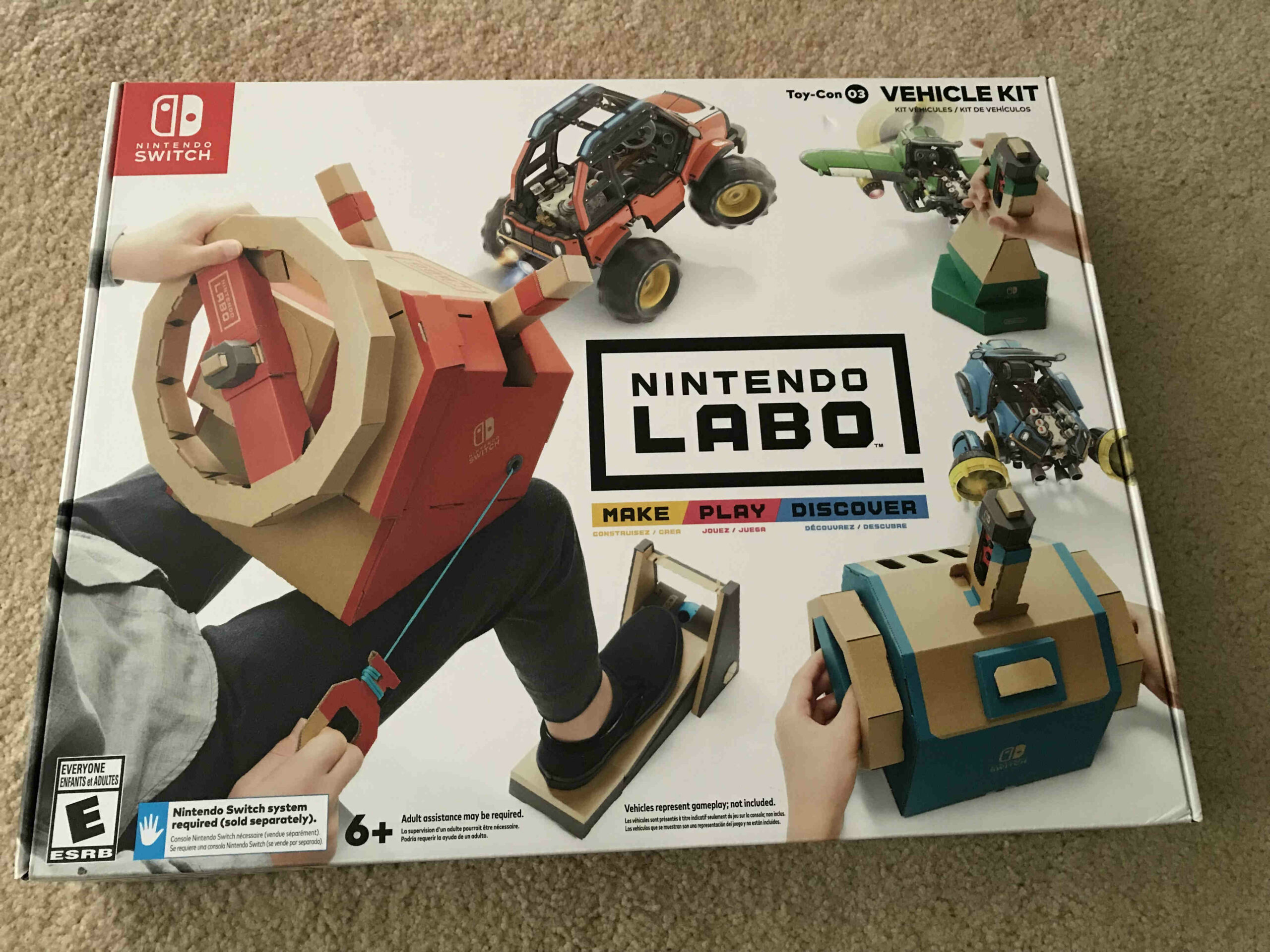 Pedal to the carpet

Nintendo is onto something with Labo, at least beyond the realms of their typical level of peripheral support.  Remember the Vitality Sensor? No? What about more nostalgic hardware like R.O.B., who only worked for two games?

How about the more recent Wii Wheel, which was $15 for a piece of cardboard and also only worked for a few things? Well now Nintendo has worked their way up to $70 cardboard with accompanying software, and as is appropriate with a vehicle-based kit: your mileage may vary. 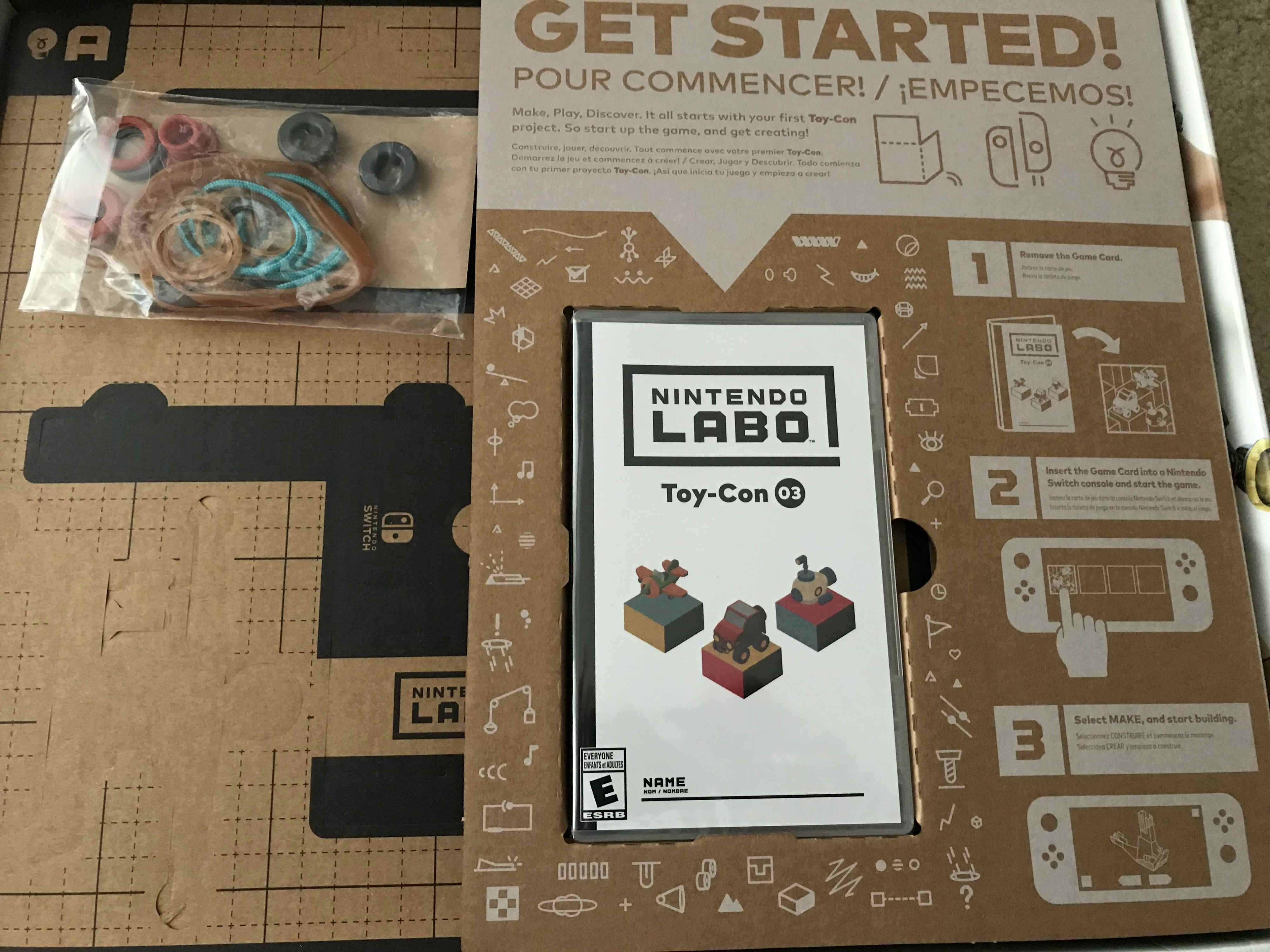 If you’ve never constructed a Labo device before, the concept is pretty easy to grasp. After opening the box you’re greeted with a Switch cart: pop that bad boy in and it’ll serve as an instruction manual/blueprint, IKEA style (but with less significant other fallout given that the directions are actually really detailed and animated, cutting down on arguments about which Lack piece goes into which Hemnes coupling: a situation that totally didn’t actually happen 10 years ago). Beyond that there’s a few bits and pieces (rubber bands and stoppers) and a giant stack of cardboard. Simple and clean.

Labo is ostensibly made for kids (the space for a child to write their name on the game cart case is cute and makes this qualifier obvious) or the young at heart. A word of warning: if you hate the idea of even playing with LEGOs you will also probably hate this. We covered a lot of the nuts and bolts of what makes Labo tick previously, so I’m just going to go right on to the Vehicle Kit specifics.

After a short appetizer Joy-Con holder build you’re onto the pedal, the gateway to your vehicular antics. “60-90 minutes” is what Nintendo suggests as the timeframe, but my wife and I took roughly 40. Still, plan on spending an entire afternoon on the rest of the kit — an endeavor that’s even more delightful with kids around and no responsibilities for the day.

Having never crafted with Labo kits before the actual cardboard is a lot thinner than we expected, but we didn’t run into any frays or breaks. The actual instructional UI is sleek, with a WarioWare kitsch to boot. Moving the camera around and rewinding/fast-forwarding at will was a blast, as the step-by-step directions are insanely precise.

So yeah, the pedal (with a Joy-Con in it) takes about an hour or more. Then there’s the key (the main Joy-Con device that snaps into each accessory and allows you to use everything), with a suggest build time of 15-30 minutes. The hard work is really in the car’s wheel/engine (150-210 min), the submarine attachment (60-120 min), and the airplane (30-60 min). All of these times are fairly accurate.

The main thing you need to understand is that when building a Labo device you’ll be using all sorts of doohickeys other than cardboard. There’s washers and stoppers, stickers, grip tape, string, the whole nine of knickknacks. While it seems intimidating it’s really not: the software literally guides you through every step with helpful iconography that even shows you each individual crease. After an hour or so you kind of get into the groove.

For a lot of folks the “build” aspect, similar to breaking open a huge $100 LEGO kit, is going to be the draw. Add up all the times above and that’s basically a full afternoon of building. 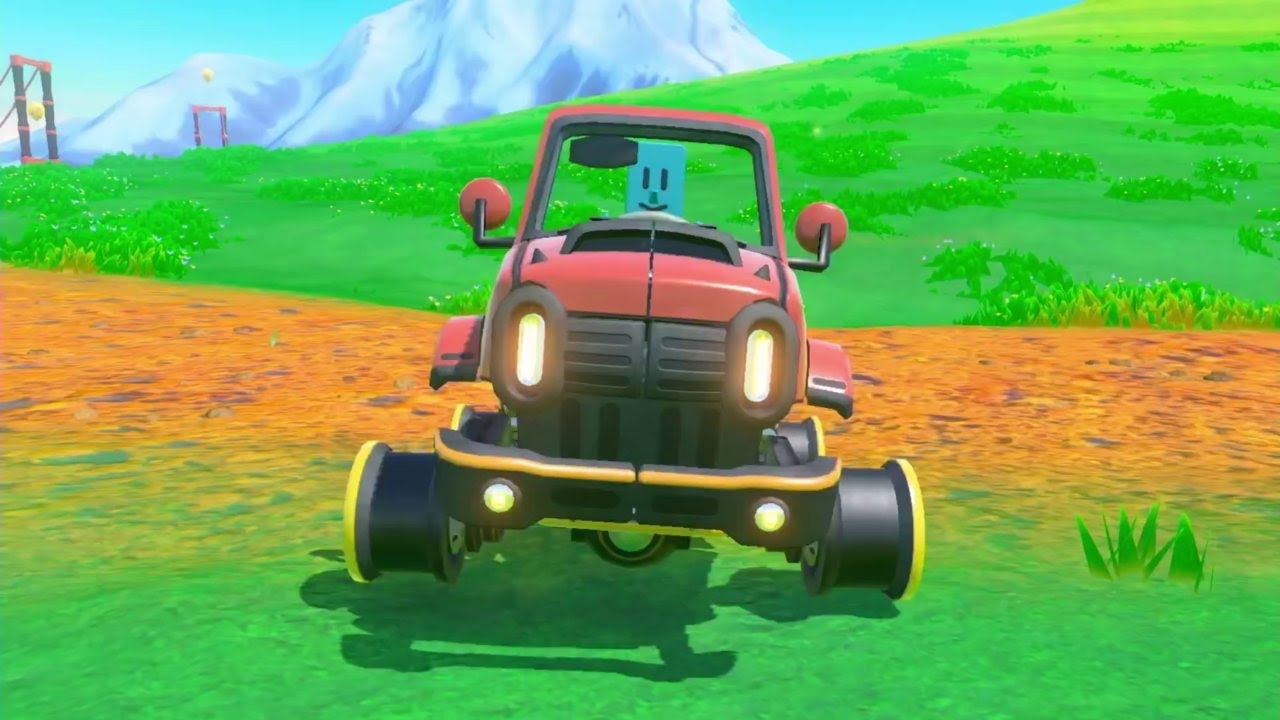 To clarify you’re not just spending $70 “on cardboard.” Labo kits, at least so far, also come with a physical game cart with a software suite.

After you’re done with the pedal you’re rewarded with a simple one-input (push to accelerate) slot car game with up to four players/CPUs.

This isn’t something I’m going to be playing long term but it’s a lot more fun than I expected it to be given that it’s literally a one-button game. You’re free to use the pedal of course but Joy-Con are also supported, as are do-it-yourself pedals with Joy-Con stuck into them (a can of chips used as a dial and a binder/sponge mechanism are shown off by the cute in-game cast as possibilities). From there you can move on to a circuit race, a free roam hub mode with quests (the highlight), a rally race grand prix, and a car battle gametype. All of these are probably going to last the average person a week at best.

The wheel is surprisingly intricate and involves three types of “gadgets.” One is a pull ring that boosts your car forward like the Cruis’n series. Then there’s the turn signal-esque levers that pop out helpful tools like a refueling coupler, and finally, a lever for reverse (as well as a single button to honk your horn and view the map right in the center of the wheel). The Labo suite shows you how it all works as you build it, so when you’re pulling and flicking all this stuff you feel a little more accomplished knowing that you had a hand in creating it. The fact that the levers can be moved to trigger gadgets is impressive on its own, but the turn signal knobs can also be rotated individually to swap them — genius.

The pedal is very responsive and can sense different points of pressure, which will no doubt come in handy with meatier experiences. At no point, even with my brute strength, did I feel like I was going to rip pieces off of the kit. It’s all pretty magical, but again, you’ll be blowing through the hub rather quickly in a few hours. With several zones and “quests” to handle it’s all well presented but I’m sure most of you out there could really go for a full game to accompany your pricey peripheral.

The plane and submarine builds are more side story-esque things. It’s neat to be able to hot-swap to another vehicle and fire missiles or grab objects underwater: in a Transformers kind of way. Some kids are going to freak out over this, but once they’re done with the Vehicle Kit software’s campaign and exhausted the few arcade modes they’re fresh out of things to do. The submarine angle seems obvious — a Switch version of Steel Diver — so does the airplane (Switch Pilotwings). To be perfectly clear neither of those exist at the moment. All you can really do is play with the on-board software and…one other big game that supports the wheel.

Yep, Mario Kart 8 Deluxe is also due to get 03 Vehicle Kit support (it already allows for motorbike-only controls in a prior Labo kit) soon. Why it wasn’t available day one of the new kit’s debut we’ll never know: but it’s coming, and we’ll cover it in a separate impressions article and link it here. This might be the first instance of a “killer app” for Labo if you’re still playing Mario Kart 8 for years after the Wii U release (I can easily see myself busting out the Labo wheel for company going forward).

Like all Labo experiences the Vehicle Kit was fun to build, but once that’s done and you’ve saturated the software, you’re done.

If you’re the kind of person who needs to take everything apart and put it back together again (or you’re an actual engineer) you may enjoy the Secret Lab mode and the power to completely alter how the Joy-Con work to serve your own needs. But I know that’s a niche. $70 is a lot of money to spend on something that you may only play a few times, so be sure that you’re making the absolute most of it and possibly own Mario Kart 8 Deluxe as a bare minimum. As someone who occasionally picks up the odd K’Nex kit with my wife and doesn’t mind spending a day crafting: I’m happy with the mere act of building this thing.

At the moment a lot of really creative people are doing some really cool things with Labo, but you need to sort of make that happen. So do Nintendo, and by proxy, third party developers: because this vehicle kit could really serve as a cool alternative racing wheel for every genre title on the Switch. Right now, it’s specialized and laser-focused.

[This scoreless review is based on a retail build of the game purchased by the reviewer.]