Hockey is definitely not North America’s most popular sport, but even non-fans can recognize that the past two entries in EA Sports’ NHL franchise stand among the all-time great sports videogames. But with its simulation hockey competitor, NHL 2K, taking a year off on the HD consoles to rebuild itself, developer EA Canada could’ve easily mailed in this year’s iteration of its venerated hockey series.

Thankfully, maintaining the franchise’s status quo seems to be anathema to EA Canada — NHL 11 pushes sim hockey to ever-higher heights with series-defining additions. In a few instances, the team may have reached too far, but their shooting percentage is impressive nonetheless. 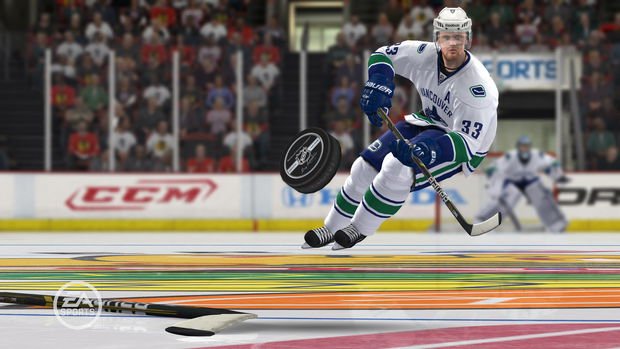 Each new entry in an annualized franchise has to differentiate itself from its immediate predecessor; the developer has to give gamers a few good reasons to buy consecutive iterations of a series. Last year’s addition of boardplay was enough to ensure that I couldn’t go back to NHL 09 after playing NHL 10 for a few hours, and this time around, the debut of a real-time physics engine provides the most significant change for the franchise since the introduction of the Skill Stick in NHL 07. The system doesn’t look quite as lifelike as the Euphoria-powered collisions in Backbreaker, but this is just the first year of EA Canada’s three-year plan to bring real-time physics into the NHL series, and it’s already far ahead of the animation-based engine from past games.

Big hits look more painful than ever, and for the most part, players react realistically when they come into contact with each other and the boards. (You’ll have to excuse the schadenfreude, but seeing a guy crumple to the ice when you drive him into the boards with a blindside hit is totally worth the two-minute timeout for a checking-from-behind penalty.) And the new hip check option (click in the right stick) lets you send guys tumbling head-over-skates — if you can make contact. Perhaps even more notable is the engine’s capacity for subtlety: a defender chasing you down on a breakaway might catch up and give you a slight shove, which nudges you off the puck just enough to prevent you from getting off an ideal shot. 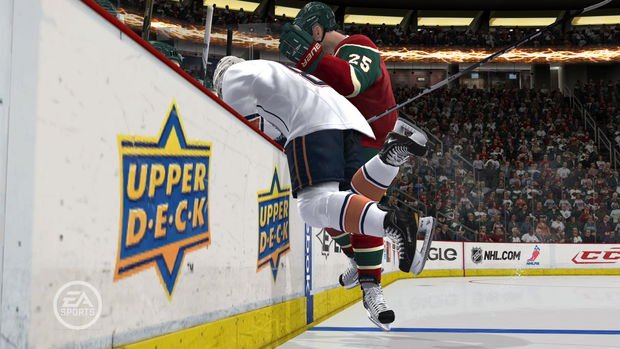 In past NHL games, checks tended to be hit-or-miss affairs; now, thanks to the physics engine, you’ll notice that hits have degrees of success. You might flatten your opponent, but then again, he may just shrug you off or lose control of the puck if you aren’t able to hit him flush. The physics engine is tied into the new broken stick gameplay. Every so often, you’ll wind up for a slapshot, only for the puck to slide harmlessly in the general direction in which you were aiming after your stick snaps in two. By default, this happens a bit too often for my tastes; one of the first slider adjustments I made was to turn down the frequency of broken sticks. But it’s still cool to see everything that can happen after a stick does break.

If your stick snaps, you can skate over to your bench to grab a new one, or — if you’re, say, in your own zone — you can have a teammate hand you his stick. You’re not completely useless without a stick, though: you can pass the puck and block shots. Sometimes, a check will even dislodge your stick. As long as it’s still in one piece, you can simply pick it up and keep going. And sticks on the ice aren’t just window dressing; they’re active physics objects, which I found out the hard way when a piece of one tripped me up as I was on a breakaway. The new physics setup doesn’t merely look good; it delivers a much more dynamic and unpredictable experience, which is what the NHL is all about.

EA Canada has also completely revamped face-offs. Before, you only had to time them correctly. Now, you have a much wider suite of strategies to choose from, and you’ll have to figure out when to use what. You can switch between forehand and backhand grips on your stick to try and win the puck back cleanly, or you can tie up the other team’s center, trusting your wingers to come in and grab the puck. Shots directly from the face-off are possible, too, and if you’re feeling frisky, you can try to skate past the center with the puck yourself. I mostly stuck with a backhand grip to attempt to win the puck back to my defensemen, since it seemed to have the best chance for success. But it’s great that choices are available. 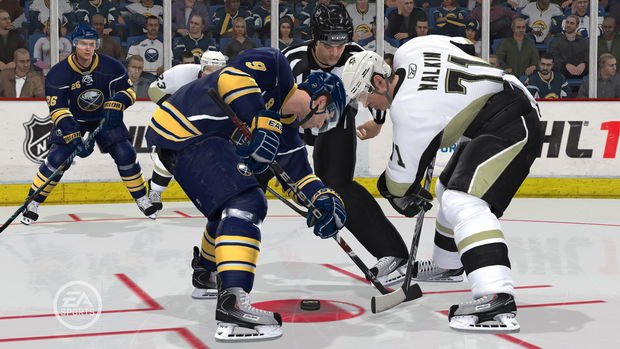 This year’s major new mode is the EA Sports Ultimate Hockey League, which seems to be a stopgap of sorts to tide over fans until EA Canada can implement a proper online dynasty setup. Its foundation comprises a trading card game similar to the “Ultimate Team” modes in Madden and FIFA. You start with an assemblage of low-rated scrubs and then buy card packs with in-game “EA Pucks” (earned by playing EAUHL games) or with real money on the Xbox Live Marketplace or PlayStation Store. The more you spend on a pack, the higher your chances of getting better cards to improve your team.

EAUHL is much more complicated than that, and that’s not necessarily a good thing. The interface is by far the worst part. It’s clumsy and unintuitive, with too many button presses (or analog stick moves) required to accomplish tasks, and it offers no way to organize your players. So if you’re looking for a left winger, you’ll have to scroll through all three pages of your roster to make sure you’ve seen all of them. You also have “consumable” cards, which offer boosts to apply to players. For example, each player has a “contract” that limits them to playing a certain number of games; you have to apply a contract consumable when that number hits zero or find a replacement.

While it’s nice that Canadian Hockey League teams are included in the game this year, their players’ presence in EAUHL deterred me from becoming as engrossed in the mode as I am in Be A Pro. I found it difficult to connect with skaters I’m not familiar with from teams in cities I’ve never heard of, and that connection is usually what keeps me playing these kinds of modes. Another obstacle is that because you can play EAUHL games online, the mode requires you to be connected to Xbox Live/PlayStation Network and signed in to EA’s servers (if you lose your connection for any reason, the game kicks you out to the main menu). There’s certainly plenty of depth for those willing to deal with the mode’s learning curve and idiosyncrasies; I’m just not one of those people. (It didn’t help that the game reminded me that EAUHL is “brought to you by Honda!” before each game I played.) 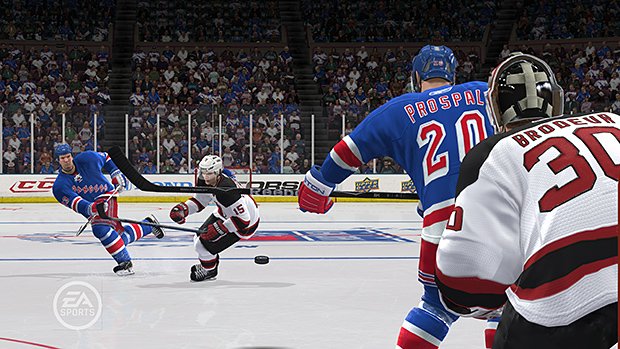 Be A Pro returns with a few notable changes. You can still place yourself directly onto an NHL team’s AHL affiliate, but you can also throw yourself into the CHL’s Memorial Cup tournament, where your performance determines your position in the seven rounds of the NHL Entry Draft. I was very happy to see my player ranking up much more quickly — you’ll earn around 70 XP for half-decent performances (instead of 15 XP or so) and upwards of 90 for good games. And your AI teammates are finally somewhat competent, as opposed to being damn near useless, although they’ll still occasionally do things that make you wish you were on the ice for the whole game.

I did notice one strange, inexplicable issue with Be A Pro: whenever you’re in the corners of the rink, the frame rate takes a noticeable hit. I’m not sure what change caused this problem, since it wasn’t present before. It’s not game-breaking, but it’s certainly a nuisance.

Online play doesn’t suffer from any issues like that. I played several games, all of which were lag-free. It didn’t matter if the game was a one-on-one match, an Online Team Play game, or an EAUHL contest — the experience was smooth no matter the circumstances. (I was unable to finish a few games, though: on three separate occasions, I was up 3-0 in a game, and my opponent quit. I guess I’m just too good.) 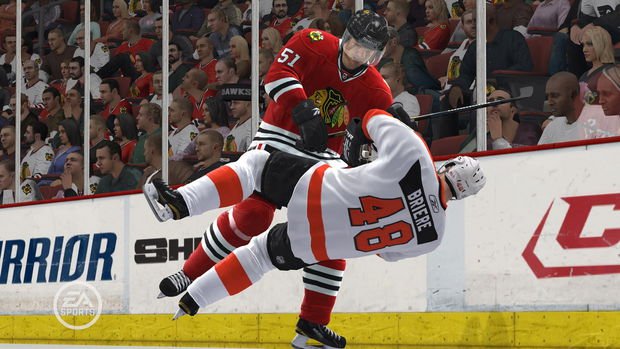 NHL 11 doesn’t have any competition to blow out of the (frozen) water this year, but that didn’t stop the hockey nuts at EA Canada from being as bold as ever with the improvements and additions they brought to the franchise’s twentieth iteration. I may not be a fan of EAUHL, but I don’t mind that it exists, since it’ll definitely generate valuable data and feedback that will help the developers create a real online dynasty mode. (Besides, the gameplay is the best it’s ever been.) Yet again, the peerless NHL team has produced a modern classic that will surely sit at the pinnacle of the year’s sports releases. This is probably the best hockey game ever — until NHL 12 comes out, that is.