With almost no desire to watch or participate in sports as a child, it was a dusty arcade machine in a low-rent video store that let me experience the rush of sinking my first three-pointer. The game was Midway’s basketball game, NBA Jam, and the year was 1993. I was just entering high school, having avoided sports for some 14 years in favor of defeating master robots, rescuing princesses, and memorizing Cannibal Corpse lyrics. But there was no avoiding NBA Jam.

The hook was that the game was so flashy and so garish, with its big-headed characters models and hyperactive announcer, you simply couldn’t ignore it. It’s a game that also managed to boil down some of the most exciting aspects of the sport — the speed, the neck-and-neck scores as the clock runs down, the over-the-top showmanship of dunks — and crammed it into an easy to digest experience, even for the sports illiterate. Oh, and it was a hell of a lot of fun to play.

17 years later, the former arcade giant Midway has shuttered its doors and Electronic Arts has swooped in to bring the classic arcade basketball game back from the dead. It’s NBA Jam for the Wii, and in most ways (for better or for worse), the thrills are exactly as you remember them.

So let’s get it out of the way right now — Electronic Arts either figured out what worked so well or just copied code over from the original game and dumped it on a Wii disc. While the latter isn’t likely, the bottom line is that NBA Jam for the Wii feels and plays like NBA Jam. Period. Every quarter is a high-energy, fast-paced, in-your-face dunk-fest that doesn’t let up from start to finish. All of the basic mechanics from the original are here, from the “Turbo” to the dunks to “heating up” to sink a flaming basketball through a net.

It feels great too, with controls that are responsive, regardless of how you decide to play the game. There are three control options for NBA Jam Wii — Wii Remote only, Wii Classic Controller, and Wii Remote and Nunchuk. If you’ve ever played NBA Jam on a console, you know exactly what to expect with the first two, and many players may skip the third option in favor of familiarity. But I’d ask those players to give the Wii Remote and Nunchuk combination a try, as I surprisingly found myself having the most fun with that setup.

As corny as it sounds, this particular control scheme actually “got me into the game” more than ever before. Players are moved using the analog stick on the Nunchuk, with various well-placed buttons for passing and turbo. Motion controls come into play for shooting — you simply raise the Wii Remote and “flick” to release the ball. For dunks, you lift the Wii Remote as you approach the net and then slam it down to complete the action. It sounds gimmicky and possibly even annoying, but the actions are subtle enough that they don’t get tiring. There’s also something to be said about physically slamming down your hand, nailing a wild dunk, and then turning to your friend for the ever-important shit talking. 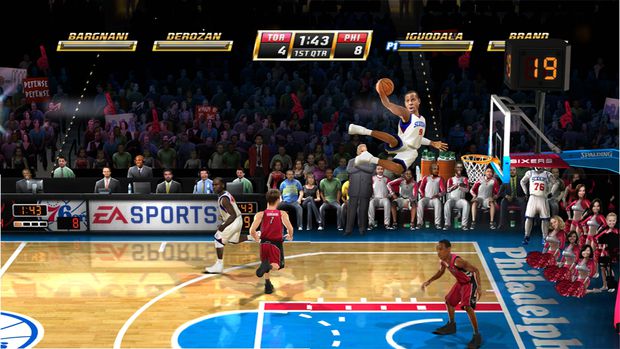 The game also sounds just like you remember it, with original NBA Jam announcer Tim Kitzrow back and hollering old favorite lines like “He’s on fire!” along with a handful of updated catchphrases. NBA Jam also looks just like you remember it, which is to say this is probably how you think the arcade game looked through those rose tinted glasses you’re wearing. In reality, Electronic Arts has updated the visuals while maintaining the same vibe and feel of its predecessors — players now feature 3D-style bodies with photo-realistic animated 2D heads. The result is a game that looks good, but not great, yet completely serviceable and exactly what fans of the original are probably hoping for.

EA Sports has added a handful of new gameplay modes and features to the game, most of which are welcome, while a few fall flat. For those interested in a more authentic NBA Jam experience, “Play Now” and “Classic Campaign” will allow you to play the game exactly as it was originally created. In the “Classic Campaign” you’ll pick a team and work your way through the game’s entire roaster in two-on-two games. The game’s “Remix Tour,”  however, switches things up and it’s not always for the best.

In the “Remix Tour” you’ll participate in a variety of new game types and modes which tweak the NBA Jam formula ever so slightly. The “remix” mode simply dumps randomly generated power-ups or detrimental picks ups on the screen, some of which will speed up your baller or make him smaller, for example. “Smash Mode” has teams of two-players attempting to shatter their opponents backboard (which has its own “health” meter on the bottom of the screen) by nailing wild slam dunks or alley oops. Both of these game modes, despite their changes, still feel like classic NBA Jam — they’re variants, to be sure, but gameplay and tactics here stay largely the same. 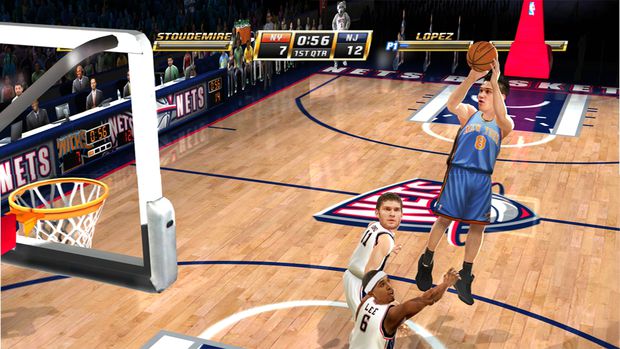 Other game modes, however, play with the formula and switch up the perspective to a half-court, “behind-the-back” view. “Elimination” sees players in last place being removed from a game until a winner is crowned, in “21” the winner is the first to score 21 points, and “Domination” has ballers vying to control “hotspots” on the court. While the rules of these games sound like they should work, the “every man for himself” nature of the games (which can be played with up to four players) makes them more fun than frustrating. Knocking a ball from the hands of an opponent, for example, will almost always have it winding up the hands over another opponent. It’s almost to your benefit to wait for a more aggressive opponent to send the ball flying your general direction, completely changing the defensive game, and not for the better.

But perhaps the game’s biggest issue isn’t anything you can find on the disc, but rather the fact that the game has a $49.99 price tag. Now don’t get me wrong, EA Sports packed a lot of content on this disc in the form of unlockables and those new games modes to justify the price tag. Playing through both tours, combined with the competition you’ll have with your friends, there’s hours of game on the disc.

But ask yourself: “Is NBA Jam the kind of game I can play for hours at a time?” For me, the answer was a decisive “no.” Despite the game being as fun as I remember it, there’s simply not much to it. Its simplicity is both its biggest strength and its greatest flaw, the feelings of deja vu setting rather quickly over the course of just a few games, even with the “Remix” modifers on.  I got the most mileage out of NBA Jam in short spurts; I couldn’t imagine a session with the game spanning more than an hour, tops. 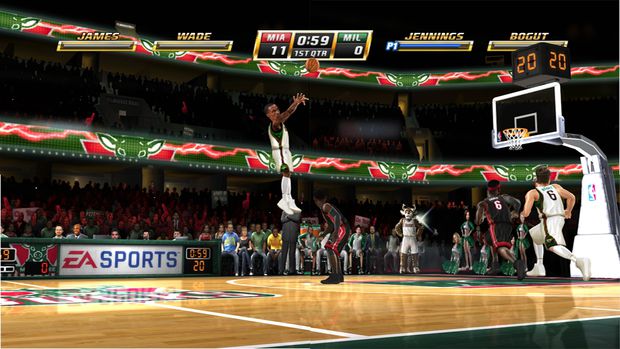 If you long for the old days of arcade-style NBA Jam basketball, then EA Sports has a slam dunk on its hands with this Wii incarnation of the series. It’s certain that NBA Jam will take you back to wherever it was when you experienced the thrill of “Boom-Shaka-Laka!” for the first time. How long it will keep your there in that special place versus the price of admission is something you should definitely keep in mind.