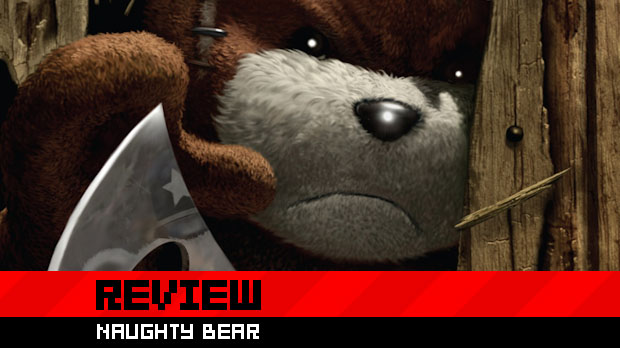 I like to champion games that aren’t getting coverage elsewhere. Usually a simple idea, a visual style, or an interesting gameplay hook will seduce me, and I’ll make sure to devote some of my time to giving it a little spotlight. Sometimes I’m right to do so and the game is a surprisingly excellent one. Sometimes I judged wrong, and it turns out I’ve been supporting a stinker.

Really, Naughty Bear is the kind of game that should be very difficult to ruin. You are a psychopathic teddy who murders other teddies in a barbaric range of cruel and disturbing ways. Sounds great, right? All you need are some decent stealth mechanics and a boatload of outrageous deaths. Almost impossible to wreck that, isn’t it?

Never underestimate humanity’s ability to cock up even the most surefire schemes. Naughty Bear, the game that should have been anything but mediocre, is as mediocre as they come. What a disappointment. 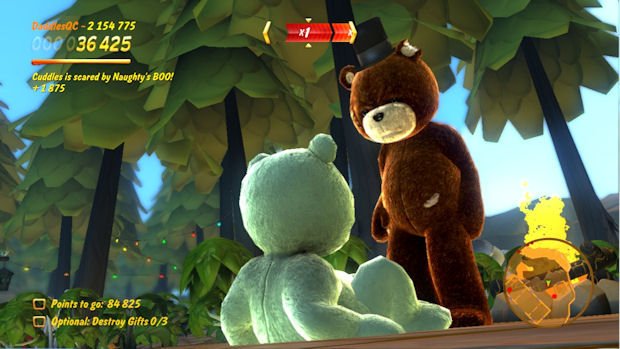 You are Naughty Bear, social outcast and perpetual whipping boy of Perfection Island. Despite his attempts to be a friendly bear, the other teddies look down on Naughty and refuse to include him in any of their games. Being left out of Daddles’ birthday party proves to be one snub too many for Naughty, and he decides to finally make the others pay with their lives. How very naughty of him.

Naughty Bear is an arena-style game in which players must trap, terrify, stalk and attack Naughty’s victims in order to earn “Naughty Points.” Each stage is split into various small maps, each of which have their own set of compulsory and optional objectives. The general plan, however, is always the same — kill everything that moves. On paper, it sounds great, but unfortunately the halfhearted attempts at comic violence, grinding repetition and inability to do so much as give us more than five maps despite having thirty-five stages, has made this into a bland and boring affair.

At its core is a very clever concept, blending psychological stealth elements from Batman: Arkham Asylum with the stalking violence of Manhunt and dressing it all up with an adorable plushy aesthetic. Unfortunately, the actual carnage on offer is beyond tame, and despite the variety of weapons and traps on offer, the action stays almost entirely the same from beginning to end. 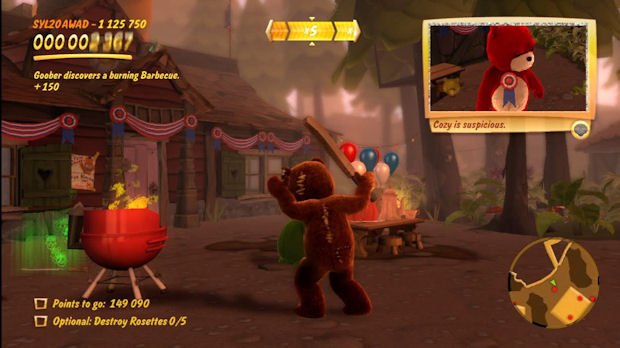 Setting traps, using weapons, and performing “contextual kills” on distracted bears remain fun for about five minutes, mostly because after five minutes, you’ve done all there is to do. You can sabotage machines and objects and instantly kill bears when they fix them, you can lay traps and murder bears when they get stuck, you can kill bears as they try to escape in cars and boats, or you can attack them with melee weapons and finish them off. Even though there are a variety of melee weapons, and a few guns, they all work more or less exactly the same and the unique executions they bestow are all disappointingly PG, thoroughly boring, and unforgivably unfunny.

The only real fun to be had is in driving bears insane. As well as performing contextual kills, Naughty can also sneak up on bears and scream at them. Each bear has a tolerance for naughtiness, and hearing windows smash, seeing dead bears, or witnessing other acts of carnage can slowly drive them nuts. When a bear’s gone totally insane, it will run around in a panic, and can even be prompted to commit suicide with one last big scare. Again, however, it’s great in theory but rather lackluster in practice, with bears not always responding how you’d expect, and a lack of variety leading to yet more boredom as players are forced to perform the same mundane tasks.

There are only seven “story” stages, but the scenarios are recycled to create all sorts of special challenge levels, like Speed Runs, or Insanity Challenges where all bears must be driven insane before their death. Most of these challenges are either more of the same, or inherently broken. The Invisibility Challenge, for instance, is almost impossible, as it charges to players to not be seen in a game where aren’t any real stealth mechanics. Stealth in this game consists of standing in bushes, but with inefficient camera angles and a poor map system, it’s impossible to tell when leaving the bushes will lead to you being seen. 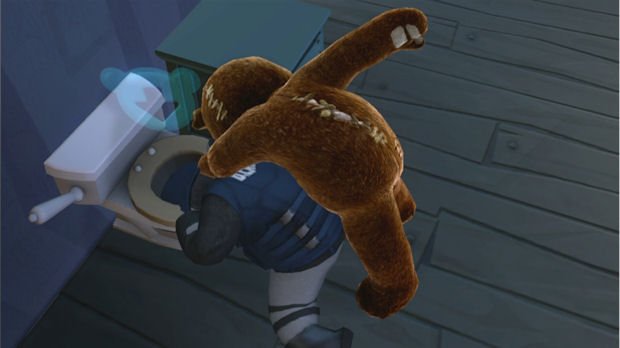 Whatever the challenge, though, the gameplay always remains the same. It’s a tame, bland, badly animated and completely unpolished attempt to be clever that falls completely on its face. There is no incentive to keep playing, what with every weapon being used the same way and every contextual kill being a short, dull, anticlimactic disappointment.

Compounding the disappointing gameplay is a smattering of unfortunate technical problems. Animations between characters sometimes don’t sync correctly, and camera angles for executions are often completely borked, clipping through scenery or providing an otherwise poor view of the action. The sound can sometimes be muffled or disappear entirely during these kill sequences, too. To cap it all, the game will randomly get stuck on loading screens, forever pretending to load while nothing is actually happening. This has happened to be about four or five times while attempting to play the game.

There is a multiplayer aspect, but don’t bother. Barely a handful of people are playing it, and if you do get into a game, it’s just more of the same, with the same old weapons and the same old kills. I was also disconnected from any game I attempted to play, leading me to believe that it just doesn’t work. 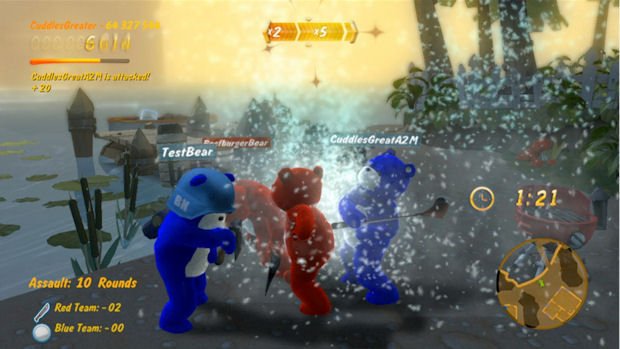 All in all, Naughty Bear is one of the biggest disappointments of the year. To take a game with so much promise, so much potential, and do absolutely nothing with it is a crime. Naughty Bear is a flat, dreary, completely boring game that relies on its core premise without doing anything to expand upon it. It desperately wants to be seen as irreverent, edgy and funny, but it is none of these things, and while it happily pats itself on the back for having a great idea, it squanders that idea with total abandon.

No game about a psychopathic teddybear should be this boring.