We waited very impatiently for Muramasa: The Demon Blade to come out on Wii this month. The slashing action game has been enchanting us with trailers for months. And here it is. The die has been cast, our fate determined, and there was nothing that would have been able to prevent it.

Now that the game is on store shelves, should you be taking it home with you and giving it a loving home? Possibly. Why not let this review help inform your decision? It’s the very best one we’ve written about Muramasa yet! 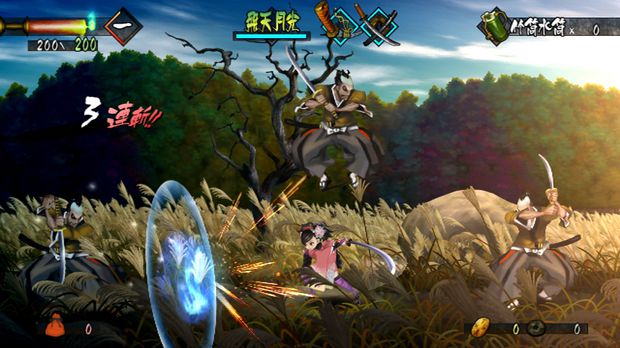 Muramasa is an absolutely beautiful game. The backgrounds are lush and detailed, giving the impression that you’re running through a picture book. Likewise, the character designs are gorgeous and all the characters have beautifully fluid animation to them. I often found myself just stopped cold, staring at how gorgeous it all looks. If you are a fan of sprites in your games, this one has them and they look fantastic.

As a story, Muramasa is passable, at best. The characters are interesting and the plot is not without its charming moments but it has some problems, largely tied to the presentation. Bits of plot are fed to you around the game’s boss fights, with sections of dialogue between characters before and after major battles. This means fighting hordes of enemies to get to a place, a big and exciting warning about how there’s a big bad guy coming and how you should be ready, then the flow is completely destroyed by the slowly progressing story content. Annoying. 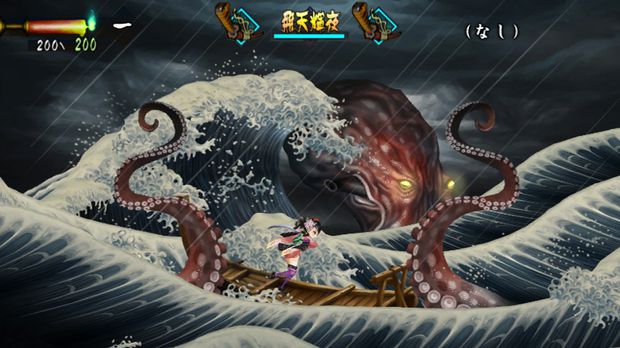 Still, the tale is compelling. The two playable characters, Kisuke and Momohime, both become home to the spirits of those who have mastered a secret swordfighting technique, called Oboro Style. Kisuke is a wanted criminal who has no memory of his past or why he’s being chased. Momohime, on the other hand, is a sweet girl forcibly possessed by a soul which desires to tear down the very walls of heaven. They are great characters, particularly Momohime, and the story is rich enough to keep interest maintained even if it is a bit poorly paced.

Each character has their own story that takes them from one end of Japan to the other. The stories take about eight hours to finish each. Afterwards, there are opportunities to fight in the game’s many bonus dungeons, some of which must be completed in order to see each of the three endings available to either character. Plus, completing the story of a character allows them to access the boss levels from the other character’s game, essentially allowing all content to be playable for each character.

The gameplay is decidedly simplistic. This is a very basic sort of hack-and-slash game which is made compelling not by the depth of its mechanics but the frenetic pace at which it operates. As you run through the provinces of Japan, you’ll have random encounters with ninja, monks, and oni among others. While certain enemies may have slightly differing strategies which are more effective, very little grace is required to kill anything and a player could easily traverse the first half of the game on button mashing alone. 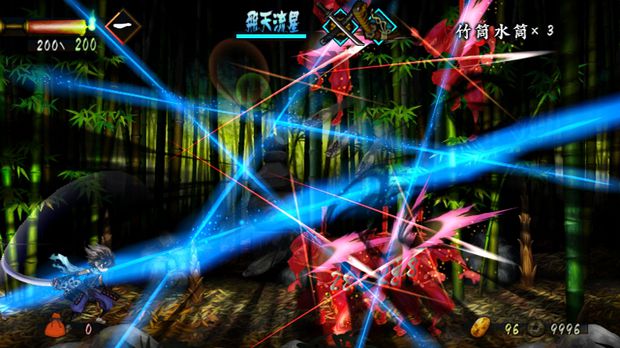 So, instead of being heavily skill-based, fights become acts of attrition. Combat will more often hinge on how many enemies you’re facing at once over how skilled you are at defeating them. Rather than forcing you to adopt new skills, the foes just get stronger and arrive in greater numbers to increase the challenge. This means combat can be fairly repetitive, but the speed at which it moves and the variety of weapons to select from keeps it feeling fresh.

As you block and deflect attacks, your sword loses its power and will eventually break. Swords can be repaired by sheathing them again and having a little patience, and you have three swords equipped at all times. Swords are differentiated by size, with normal blades supplying quick attacks and long blades acting more slowly but delivering more damage. In addition, every sword has a special attack which can be activatedby using some of its juice. New swords are acquired by defeating boss enemies or by spending points earned through combat.

Apart from some really useful special attacks, most swords are completely interchangeable and you’ll probably spend a lot of the game just using whatever deals the most damage. As time passes, however, some swords do show greater value from secondary traits than their raw attack power. In addition to their special attacks, most swords also confer some sort of bonus to the player in the form of stat boosts or bonuses to gaining experience points and health regeneration.

It does get a little repetitive at times, as the game is basically a lot of running and sword swinging. Enemies seem to scale their damage and hit resistance to your character’s level, so it also rarely feels like you’re making any real progress. Still, fun wins out over tedium by a long mile as the action rarely gives you time to feel bored. 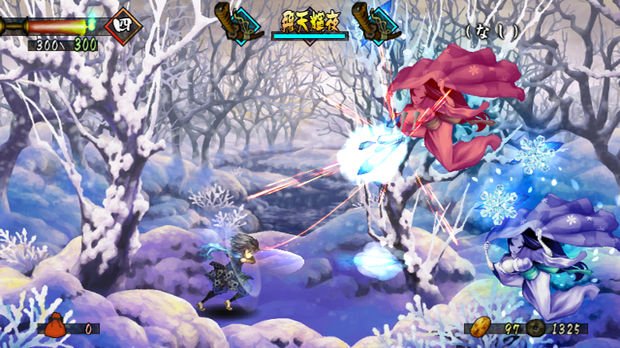 The controls are tight and responsive, the way they should be in any action game. Three control schemes are available, allowing the player to use a Wii Remote and Nunchuk combination, a Classic controller or a Gamecube controller to play. I recommend using the Gamecube or Classic controller if possible, simply due to button layout, but the Nunchuk controls work just as well and it’ll merely be a matter of player preference.

Muramasa features multiple difficulty modes. Mudo, the most basic level of challenge, automatically blocks attacks when you are not in the act of attacking yourself. This is basically for people who have never played a brawler before, and will bore more experienced veterans. Suro, where most people will likely find the most enjoyment, requires you to hold the attack button down when you wish to adopt a defensive stance but there’s otherwise no difference. A third mode for the truly brave unlocks after finishing the game in which you have only one hit point before death’s sweet embrace.

Overall, it’s a very solid title. Flawed, certainly, but a lot of fun to play if you don’t mind a little repetitive combat and a story that feels a bit slow.