It’s an incredibly simple game with a timeless story. Deep within his haunted castle, The Duke awakes to discover that his princess is nowhere to be found. Clearly, she has been kidnapped by a monster and it’s up to the dashingly handsome and totally awesome Duke to rescue her, just as soon as he finds the right culprit.

In each of six stages, The Duke threatens a different monster who — clearly responsible for the kidnapping of a certain princess — tries to escape The Duke’s mighty wrath by flying upwards. Controlling The Duke, you give chase to the monsters in a vertical-platforming race jumping from platform to platform and must strike the monster three times before they reach the top of the stage where you cannot reach them.

Sounds easy enough and, frankly, it is. The challenge in Monsters (Probably) Stole My Princess comes not from merely defeating monsters but in looking good doing it. The Duke has a few stylish moves in his repertoire and performs deft leaps, flips and other animations as he moves. He can jump and perform a second jump in mid-air. This double-jump also serves as his attack. He may also cling to and jump off of a wall as a temporary stepping stone should he need a second pair of jumps to reach a distant platform. And, finally, he may jump down through a platform he is standing on. 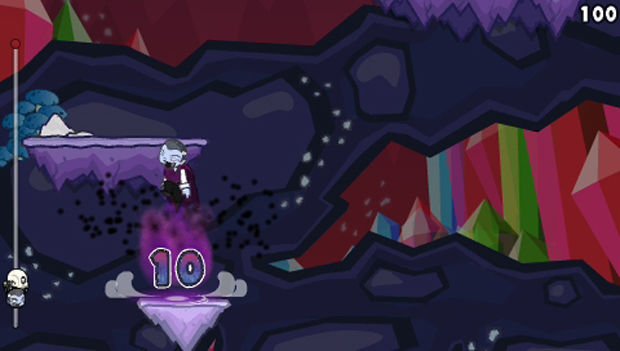 Every time The Duke lands on a platform, a combo counter increases. If he steps on a platform he has already been to, the counter resets. The higher your combo, the more points you will earn when you hit the monster. The combo count also determines which of three attacks The Duke uses to ultimately conquer his quarry. Finally, increasing the combo also increases the speed at which The Duke moves and, thus, puts the pressure on the player to be ever more accurate.

The Story mode is a delightful, though predictable, romp. The Duke is a comically arrogant figure who persists in being funny even when you already know what the joke is going to be. The combination of happy and creepy in the art design goes a long way towards supporting the joke, as it becomes obvious quickly that all of the monsters are scared utterly sh*tless by the clueless Duke, and their helplessness is reflected cheerfully in their appearance.

Beyond the Story is a Score Attack mode with an additional 18 levels, three for each of the stages in the main game. 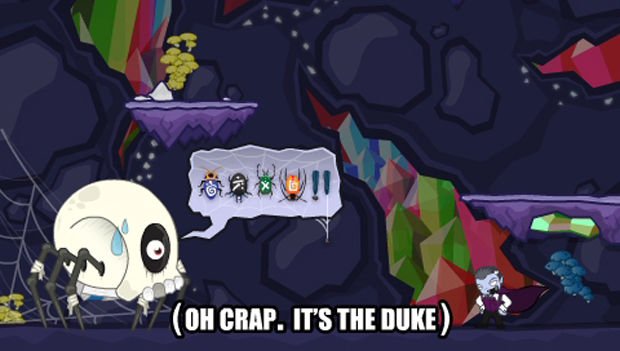 It is possible to achieve a perfect run — hitting every platform in a single combo before defeating the monster — on all of the game’s 24 levels. For the perfectionist, this combination of simple gameplay and insidious level design is like crack cocaine. Because The Duke’s attack is a commonly used move, easier levels become more challenging as you attempt to perfect them, since you must pace yourself to ensure that the monster will not be killed prematurely but will be hit at least twice before delivering the coup de grace at the peak of the level.

You can use either the left analog stick or the directional-pad to control The Duke. On the Xbox 360 controller, the clear choice — as should be expected — is the analog stick. It performs its task admirably and never did I find that it wasn’t up to the task from an accuracy standpoint. The directional-pad still works, though I have had occasional difficulty in dropping down from a platform using it and, on the whole, it just doesn’t feel as responsive.

If you enjoy a good platform game with a considerable but worthy challenge and a lot of charm, Monsters (Probably) Stole My Princess will certainly deliver that for you. It is addictive, occasionally frustrating and constantly fun. Your money would be wisely invested in this one.