Halfbrick has been slowly making a name for itself on iTunes. Fruit Ninja has been a stellar success, and its latest game, Monster Dash, looks set to be pretty big too.

Barry Steakfries has returned from his time traveling adventures in Age of Zombies to tackle an even wider variety of beasties as he runs and jumps through a series of world locations. I like “runner” games, although finding good ones can be difficult. Is Monster Dash among the rare gems, or the common trash? Read on to find out! 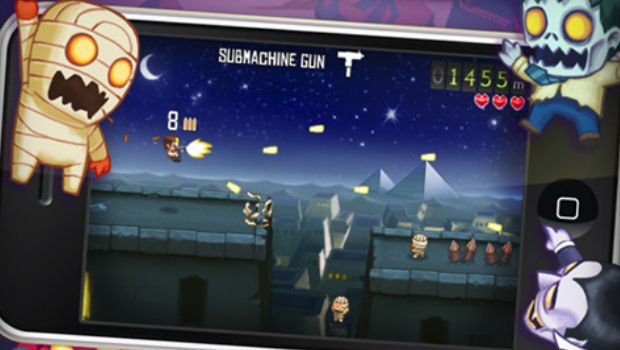 There’s no shortage of runner games on the iPhone. Canabalt, Hellkid, Dynamo Kid, the simple controls for a game in which you run from left to right and avoid stuff makes it an obvious choice for many App developers. Nevertheless, despite the simplicity, most devs find a way to muck it up. Dynamo Kid‘s controls are unnatural, Hellkid‘s swinging mechanic is poorly implemented. It’s an easy genre to get wrong.

Fortunately, Halfbrick has done it right. Monster Dash is inventive without being overly complex, and simplistic without being remedial. The aim of the game is to run as far as you can, hitting the bottom left corner of the screen to jump and the bottom right to shoot. Barry will handle the running part himself, it’s up the player to keep him alive.

Every 1,000 miles, Barry will be transported to a new random level with its own music, scenery and themed monster. Along the way, he can hit crates that unlock new weapons with limited ammo, such as the as railgun-like Pacifier or the excellent Machine Gun Jetpack. There are also hearts that can be used to extend the life bar, or recover from damage caused by traps and monsters. 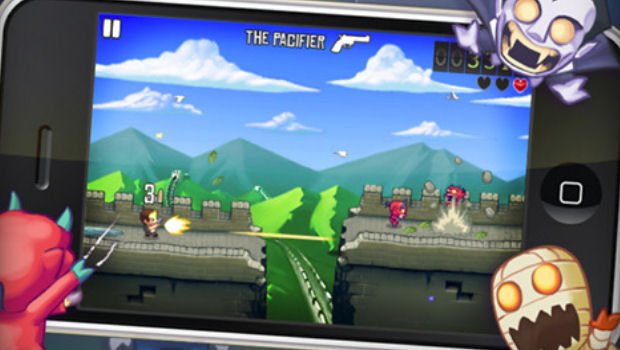 As with all good runner games, it’s an instantly fun game that encourages players to beat their own high scores and see how far they can get. Of course, the other downside is that the game can be quite repetitive, and due to its lack of surprises, it’s not a game you’ll be playing over and over again in one intense sitting. However, it is a game you’ll definitely be returning to on regular occasions, perfect for a bored five minutes.

The game also looks good, and while it lacks the consistent humor of Age of Zombies, still makes for an entertaining romp that will surely earn Barry Steakfries a fair few fans. All told, Monster Dash is a great title and well worth the meager asking price. You’ll get your money’s worth, and with Halfbrick promising to update the game with new monsters and levels, you can’t go wrong!