While mobile gaming has been steadily improving with smarter touchscreen control design, there are still plenty of experiences out there that could use a good set of joysticks and buttons. That’s where PowerA’s MOGA Mobile Gaming System comes in. It saves the day from iffy virtual d-pads and unresponsive virtual buttons with real ones. It also saves your screen from thumb grease.

PowerA has attempted to provide something of a controller platform for game developers, and several companies, including Gameloft, Atari, Namco Bandai, and Sega are already retooling their games for it. 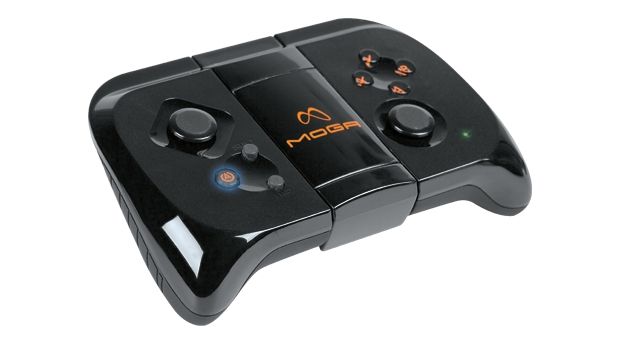 The MOGA controller features two analog sticks, four face action buttons, a start and select button, and left and right shoulder buttons along the top edge, offering a layout not unlike that of the Xbox 360 controller. The analog sticks are more like flattened pads with rubberized tops. Their travel distance from center to any direction seems short, but they’re well made, and gave me no problems in gameplay. The face buttons are small, clicky, and a bit noisy when there is a lot of action, but they’re responsive enough.

The rear of the unit is rubberized, with some gripping indentations along the ridges where the battery doors are. It holds a bit like a PSPgo, though it has much more in the way of handgrips. It’s thin and compact, which means that you should have no trouble taking it around with you. It comes packaged with a nice carrying pouch for this purpose. 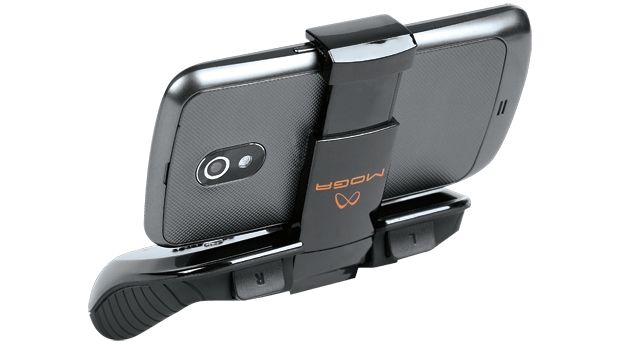 Your mobile device is held in place by a stretching mount arm that folds out from the center of the controller. It mounted the Galaxy SIII with no issue at all, holding it securely enough to walk around with the combo. PowerA says that the arm stretches out to 82mm wide, which means that it will even hold a Samsung Galaxy Note.

For as light as the controller is, having a phone mounted on this unit makes the whole setup feel a bit back heavy with any device. And in my case, with the Galaxy SIII mounted, the volume rocker was inaccessible, as the bottom grip of the arm covered it. Of course, you’re free to use the MOGA without mounting your device.

The MOGA uses a Bluetooth connection to talk to your mobile devices, with an initial pairing that is quick and painless, and subsequent connections taking place automatically after the included MOGA Pivot App is started. Any Android 2.3+ phone or tablet will work with this controller. The device is powered by two AAA batteries, which PowerA claims will provide 18 hours of play time. 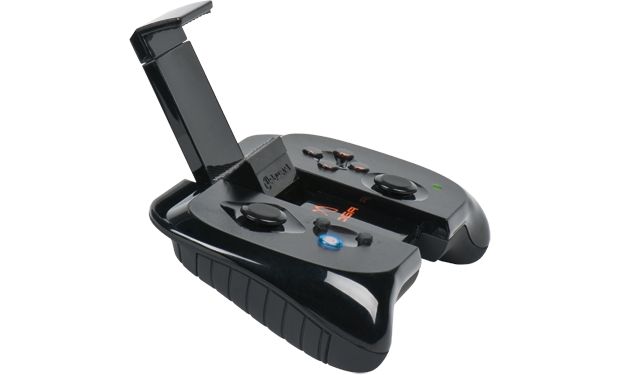 Games are started from within the Pivot App, which doubles as a launcher and a store for MOGA compatible titles. New compatible game purchases are detected and added to its game list every time the application is started. The app also automatically sees your powered MOGA and instantly pairs with it every time it is started.

There’s no key mapping to worry about with this device as the developers have done all the work for you ahead of time. This means that you can boot up any supported game and instantly start playing, and that you’ll never have to touch your device’s screen. Even touchscreen heavy games like first-person shooter N.O.V.A. 3 – Near Orbit Vanguard Alliance were mapped nicely, with every button on the MOGA being used. Gameloft’s Dungeon Hunter 3 was also mapped well, with attack and item use mapped to face and shoulder buttons. My Astromancer was able to cast spells in any pressed direction with the right analog stick.

Controller performance varies by game, and probably also by mobile device. For most, it’s as responsive as you’d expect a portable game system to be. Sonic CD played fantastically, with the controls translating exactly as I’d expect in one of my favorite platformers ever. Virtua Tennis Challenge also came across nicely on the MOGA. Others, like N.O.V.A., weren’t as responsive, even on the Samsung Galaxy SIII. Neither of the available racing games, Asphalt 7: Heat and Riptide GT, seemed to have much in the way of analog feeling movement. They were definitely playable, but felt a little stiff and digital, kind of like playing an early console racer. It’s more likely that some of the games are at fault here, though, and not the controller.

For those looking to use physical controls for emulators, you might want to hold off for a bit. At this time, MOGA does not support any of the emulators. I could definitely see this changing later, though.

For the most part, using the MOGA with a phone felt just like using a quality portable gaming system. It’s an impressive, well-built device that feels natural in the hands, and transparent in gameplay. It did its job so well that I forgot I was using a mobile phone while playing most of these games.

A lot of this is due to developers tailoring their games specifically for this controller. And with several dozen MOGA Enhanced games set for launch, you’ll have plenty to play at first. But with no way to map controls yourself, let’s hope that more game developers continue to enhance games for this device. Hopefully PowerA realizes that opening up the software app to let users map their own controls would be a good move.

If you’ve been wanting a gaming controls for your Android device, the MOGA is a slick solution as it goes beyond just being a Bluetooth controller with its software suite and enhanced games. At a price that is to be set somewhere around that of a console controller (around $50), it’s not exactly cheap, but it’s probably the best stab so far at creating something of a mobile gaming controller standard.