Mega Man had a rough ride for a while there. Before we saw that Capcom was hard at work on Mega Man 11, there were seven long years of nothing. Instead, other talented studios and fans picked up the torch, and refused to let this once famous mascot die.

Jasco, with their Mega Man-centric adaption of Level 99 Games’ Pixel Tactics, is one of those entities. 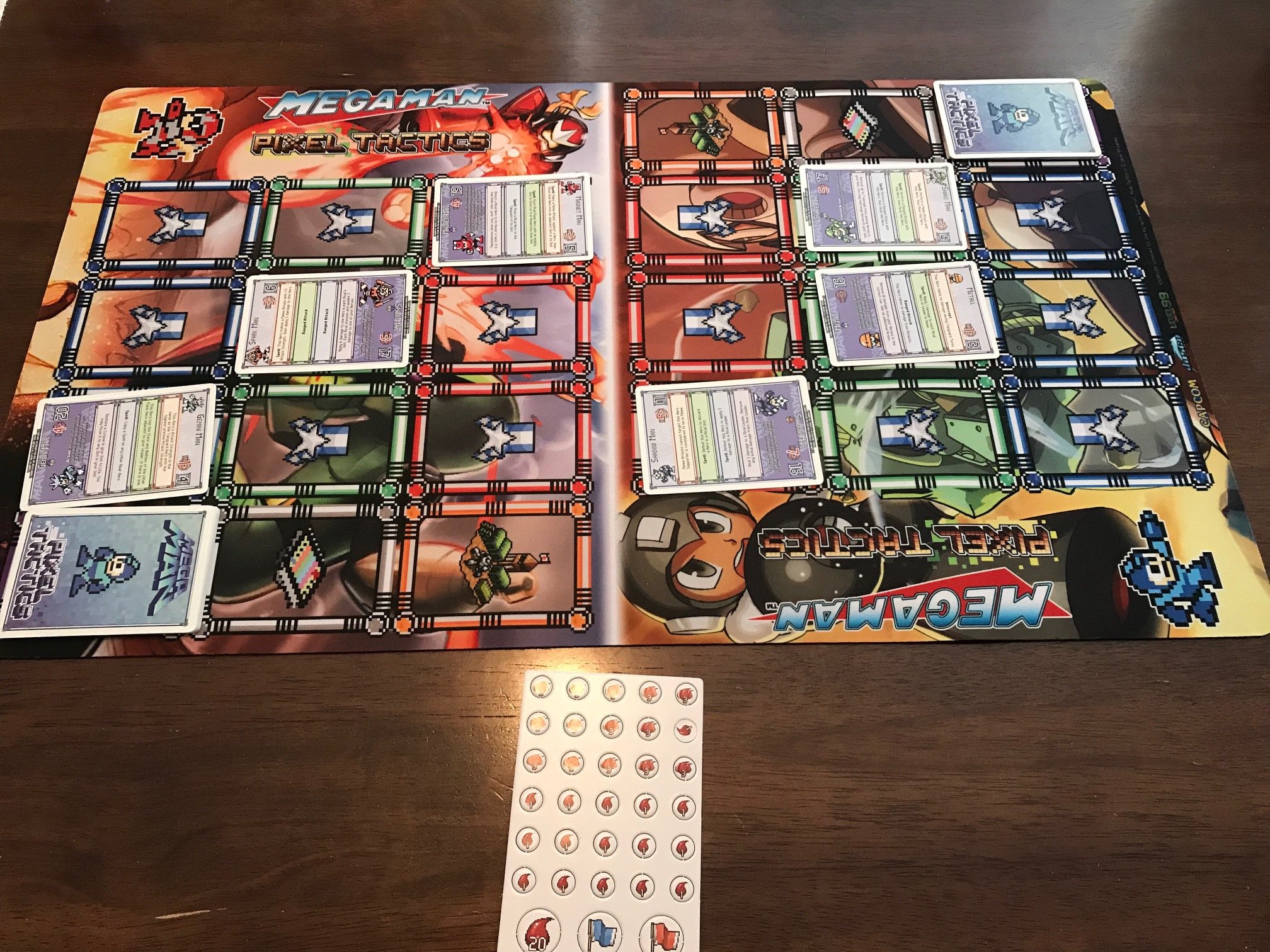 Pixel Tactics was originally released in 2012, featuring both original characters and some from Level 99’s own BattleCON: War of Indines. It’s seen many expansions since then and even the release of a new edition, including the aforementioned Mega Man twist. After a successful Kickstarter at the end of 2016, Jasco brought their own version into the fold with three boxes. The default blue focuses on Mega Man 1-3, Proto Man’s own red box hones in on 4-6, and Bass centers on 10-11. A few packs also have some Game Boy love.

It’s a great idea, as Pixel Tactics already has five years of refinement under their belt. All Jasco needed to do is take the various Robot Masters and make them semi-thematic, a goal I think they accomplished. They reach deep into the annals of Mega Man history here, even tapping into characters like Dr. Cossack and the Doc Robots. Each box has 28 different characters (with two copies of each for balanced multiplayer out of the gate), and tokens to keep track of damage and the like. In other words it’s fully complete out of the box, but you can also get a play mat just in case if you want to be extra official (the mat is nicely decorated, high in quality, and sticks nicely to a table).

Setup is simple, at least when it comes to card battle games. Grab a deck, place it on the table as a draw deck, and grab five cards. One of those cards will be your leader (placed in the center), which is denoted by flipping the card so that it shows the leader side. Depending on where your card is located on the grid (vanguard in the front, flank, then rear) they’ll employ different abilities, all of which are printed on the card. 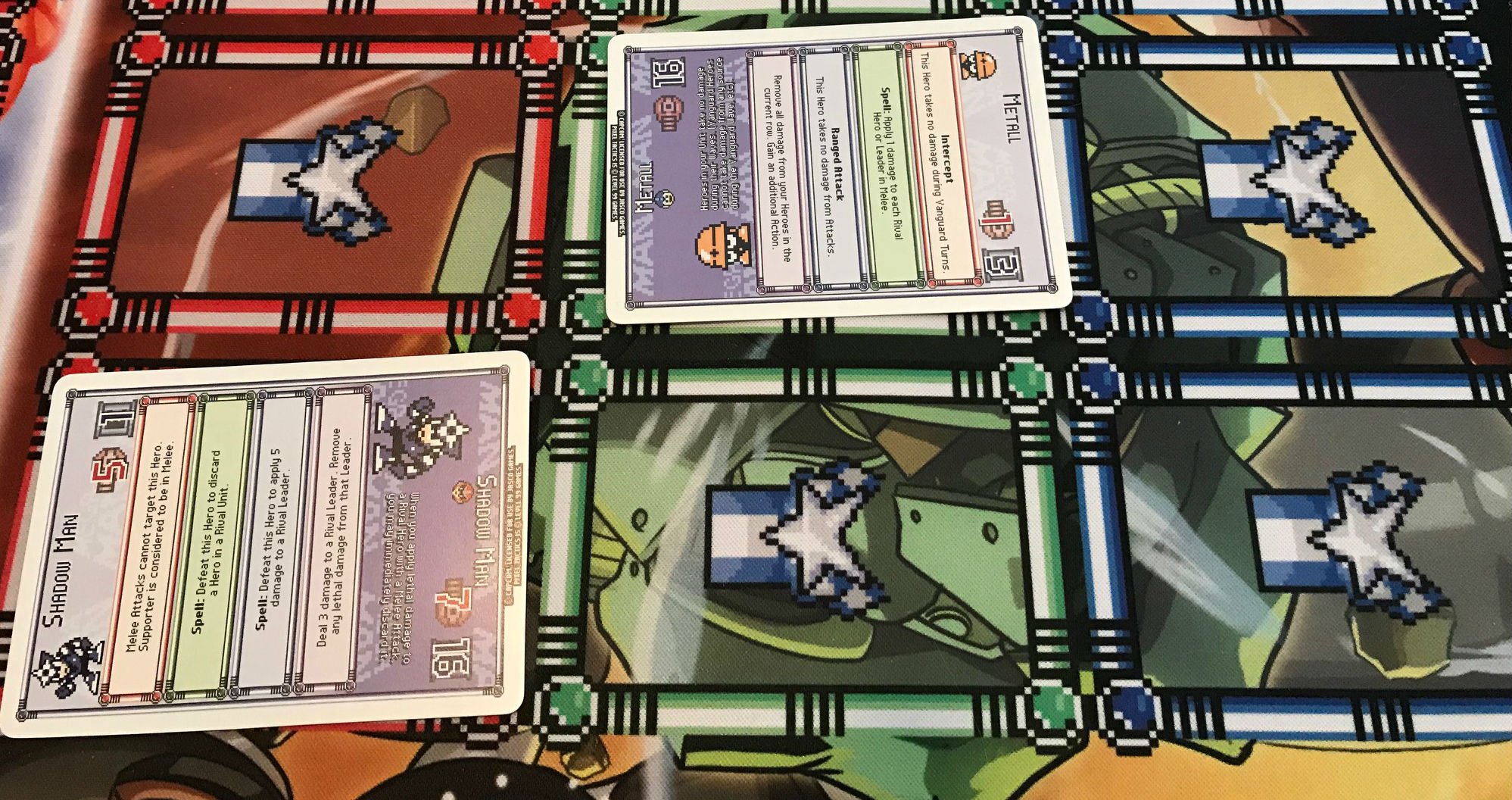 Your job is to build your army, use two actions per turn to buff or heal your cards, and eventually take down your opponent’s leader. All of this goes in waves — front to back — and doesn’t stop until there’s one player standing, an exercise that usually takes 30 minutes or less. The simple concept of building up rows is why I was drawn to Pixel Tactics in the first place.

Allowing any card you choose as the leader is one of the draws for me. Every game feels a little different, if only because you have to drastically alter your strategy to build around them. It’s especially fun when you have wacky characters like Guts Man at the forefront, who has a tanky hitpoint value of 30 (towering over everyone else), and can throw corpses at enemy heroes for damage. Like I said, they do a decent job of adding lore-heavy fluff in!

It helps that Pixel Tactics‘ base is fun and rewarding .Nearly everything you can think of is a possible action. Clearing a dead/flipped card is an action, as is swapping your troops around. You also need to be considering your lineup carefully, as melee attacks, while powerful, can only be initiated from the vanguard.

Mega Man Pixel Tactics is compatible with the core set or can be used as a standalone thing, which is fortunate if you decide to delve further into the game or if you stay put. There’s plenty of expansions and doodads to get that go beyond the realm of Mega Man, but the base plays just fine with one box for two people.