The first two batches of Mega Man 10 DLC are out, and both are tailor-made to please the most loyal of Mega Man fans. Bass mode and Special Stage 1 bring us characters who have never been seen in a NES-style Mega Man game, and the results aren’t entirely what I expected. I thought I knew these guys. I’ve played as Bass before in Mega Man & Bass, and I’ve fought Special Stage 1’s Enker in both Mega Man on the Game Boy and Mega Man Soccer on the SNES.

I thought I knew what to think of these two Mega Man haters, but I’d never seen them like this. The results of bringing Bass and Enker to the 8-bit Mega Man world are both exciting and strange.

But are they worth 1-2 dollars? 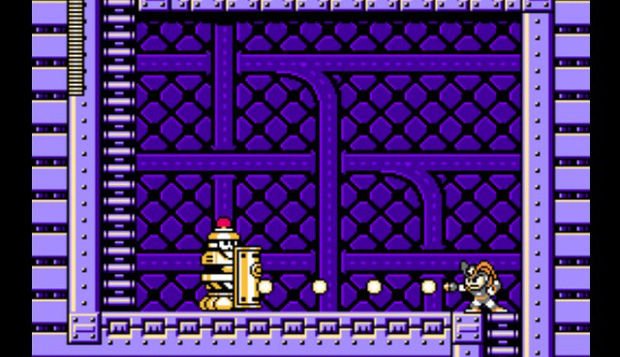 First off, I’ll tell you that I’m not a fan of Bass. I see him as the Poochie of the Mega Man series: a Scrappy-Mega-Man-Doo that Capcom brought in to try to make the original Mega Man games feel “current” and “hardcore” in the 16-bit era. While just about every Mega Man character in the pre-Mega Man 7 games has a certain timeless simplicity to them, Bass is clearly an overly detailed, attitude-packed child of the mid-’90s. I enjoyed Bass in Mega Man & Bass, but enjoying and respecting aren’t the same thing. Everything about the guy — the permanent snarl, the unnecessary facial scars, the purple bullets — screams “trying too hard.” Bass isn’t quite as bad as Shadow the Hedgehog when it comes to being “h4rdc0r3,” but he comes close.

Mega Man 10 works to change that. The purple bullets are gone, the facial scars aren’t as prevalent, and most importantly, Bass has gone 8-bit. Though I’d imagine that he’s not all that psyched about it himself, the anti-hero of the Mega Man universe has now officially traded in his oversized hands and feet for a gigantic head and fat little belly. Though his design is still a little overcomplicated compared to Mega Man and Proto Man, this is still the most palatable version of Bass I’ve seen yet. He finally “fits” with the Mega Man world that I grew up with. That may not mean much to Mega Man non-fans out there (who are reading this for some reason), but for the rest of us, seeing Bass go retro is a big deal. Imagine if the next live-action Star Wars project featured Jar Jar Binks, but instead of being fully CG, he was now a guy in a suit and his “mesa no bombad” dialog was replaced with Chewbacca-inspired guttural fish-grunts, and you’ll get the idea of what it’s like for me to see Bass in Mega Man 10. 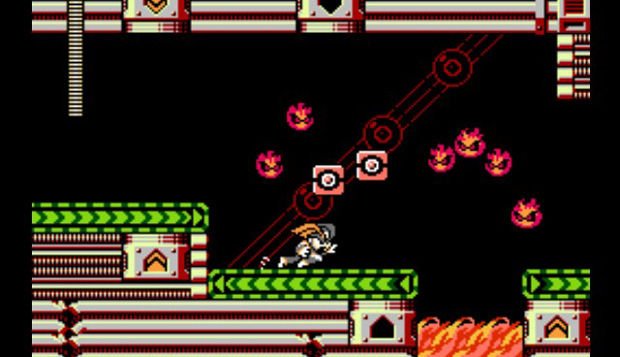 Old-school fans of Bass shouldn’t fret. There are a lot of nice details thrown in to keep the character feeling like the Bass that we grew to know in 16- and 32-bit. He’s got the same “angry” dash, the same clenched-ass pose as he teleports onto the screen, and the same cyber-wolf-dog pal Treble — all now in glorious 8-bit. Some will take this to be a downgrade. I see it almost like a LEGO-ization, a Mighty Mugg-ified version of the Bass I once tried to ignore. And it works.

As for how he plays, Bass has most of the moves he had in Mega Man & Bass. He can shoot in any direction other than straight down. He has automatic rapid-fire; a dash move that, when combined with a jump, sends him flying about twice as far as a regular jump; and the ability to fuse with his wolf-dog to form a flying, spread-shot-shooting version of his former self. The only thing Bass is missing is his double jump, which I assume Capcom left out for fear that it would break the game too much.

Well, if that’s what you were afraid of, Capcom, I’ve got bad news for you: it’s too late. All the other stuff Bass can do breaks the game anyway. When he fuses with Treble, he can fly over huge portions of levels without any risk of danger, and thanks to his ability to shoot straight up, almost every mid-boss in the game can be killed in a few seconds by standing under it and firing upward. That works against a lot of regular bosses, too, as well as random enemies. What were once some of the most challenging parts of the game are now painfully easy. 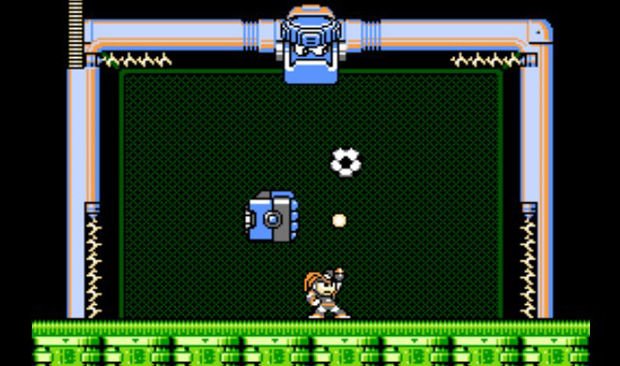 Playing as Bass isn’t totally unbalanced. There are a few times when his weaknesses (half-damage bullets; an inability to run and shoot; an inability to shoot through walls) make the game a hair more challenging. The field of rocket-soccer balls in Strike Man’s stage is definitely harder to manage with Bass. Problem is, if any part of the game does turn out to be harder to manage with Bass, nine times out of ten, you can just fly over it. Had they made the Treble fusion power-up something you had to unlock, instead of something you get from the start, then maybe this wouldn’t be such a problem. As it stands, Bass mode is a little too easy to be totally awesome. It’s nice to get revenge on all the enemies that kicked my butt the first time I played Mega Man 10, but to see them go down this easy is a little anticlimactic.

Also disappointing are the meager changes made to the game’s story when playing with Bass. Capcom was cool enough to add Bass’s face to the title screen after you buy him, but other than that, the Bass-specific additions to the game’s story/cut-scenes are minimal. Other than slightly altered dialogue in the game’s ending, and an admittedly cool new shop (complete with more weird cameos and new music), there isn’t much new here. That said, there may be more to the character that I just haven’t found yet. It was just yesterday that I saw the special effect that Bass’s rapid-fire has on the game’s shielded enemies.

Just like with the rest of Mega Man 10, I think Mega Man fans will be satisfied with Bass mode, but it will help if they set their expectations to “low.” With a little more balancing and a few additional cut-scenes, Bass could have been a truly amazing addition to the game. As it stands, playing as the wanna-be robo-bad-boy is just…

Score: 7 — Good (7s are solid efforts that definitely have an audience. Might lack replay value, could be too short or there are some hard-to-ignore faults, but the experience is fun.)

Mega Man 9‘s special stage is a tough act to follow. It was more than twice as long as a regular stage, contained every mid-boss in the game, and had some of the best music in series history. Though Mega Man 10‘s first of three planned special stages doesn’t manage to excel in those areas, it does enough new stuff to feel like a worthy follow-up to its predecessor. 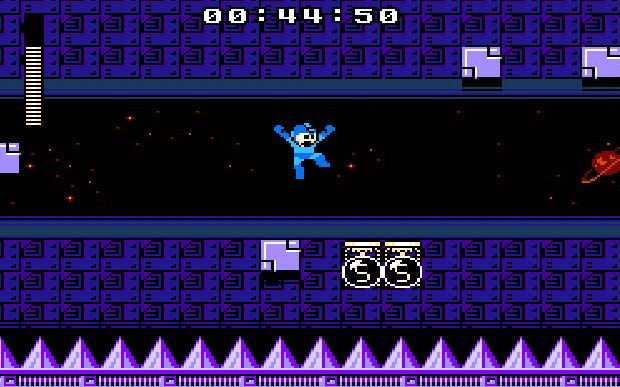 Like so much of Mega Man 10, this special stage doesn’t feel quite as inspired its Mega Man 9 equivalents. As with all the time attack stages in Mega Man 10, you start special stage 1 with all your weapons, just one life, and no E-tanks or other items. These limitations add a certain “survival mode” flavor to the proceedings, which works to add a sense to urgency to every event. The music is a nice metal chiptune mash-up in the style of Solar Man’s stage theme, with a bit more emphasis on virtua-guitar solos. It’s a catchy but forgettable number, one you’ll sing along to while you’re playing, but stop as soon as you’re done. The stage looks good, too, albeit in a similarly nondescript manner. Unlike the best stages from the Mega Man series, there isn’t much of a unifying motif here. There are a lot of instant-kill spikes, but that’s about it for a theme.

Don’t let that discourage you, though; most of the spikes are easy to avoid. There is a traditional Mega Man “disappearing blocks of spikes” area, but it can be easily flown over with the Rush jet. Other than a few vertically scrolling sections, and a couple of tricky conveyor belt bits, there isn’t much here that will kill you. The stage isn’t very long, either, with no mid-bosses to extend the experience. I’d expect the average Mega Man fan to get to special stage 1’s boss on their third or fourth try, which I’m guessing will take about twenty minutes. 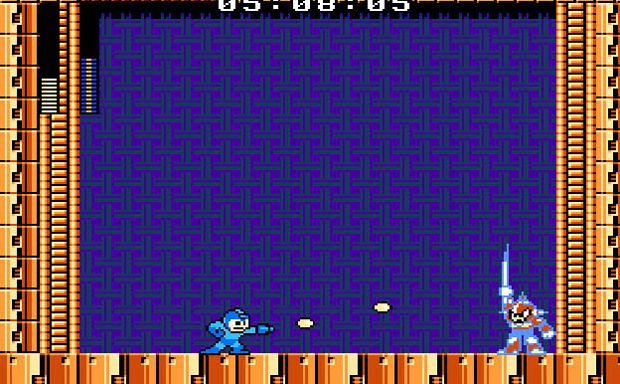 That’s not to say that you’ll be done with the stage that quickly. I got killed by Enker at least five times before I finally beat him. Enker is a bastard, plain and simple. He’s much smarter and unpredictable than the eight “regular” bosses from Mega Man 10. I don’t want to spoil all his secrets for you, but I will tell you that his attack pattern can’t be easily memorized, and simply shooting him as much as possible may not be the best idea. One thing’s for sure: this guy could kick Fake Man’s ass any day of the week.

The coolest thing about the whole package? If you get through all of it alive, you actually get a reward. Beating Enker scores you the Mirror B., a new weapon for Mega Man that is usable in any time attack stage, or after selecting Mega Man in a new game of campaign mode. Like the sword that Enker uses against you, the Mirror B. reflects projectile attacks back at enemies. It works a bit like Proto Man’s shield, except you can use it while jumping or standing, and it reflects energy back in a more powerful, wider bullet. It doesn’t seem to have any practical use against the game’s bosses, but it works great against Sniper Joe and your standard Hard Hats. Replaying the game with Mirror B. almost feels as different as playing it with Bass or Proto Man, and that experience only promises to get better after scoring the weapons from Punk and Ballade in special stage 2 and 3.

Despite the fact that it’s a little short and a little easy, the challenging boss fight and the weapon you score afterward make special stage 1 a must-buy. I give it a…

[UPDATE: Tony Ponce and Capsulex have just brought to my attention that Special Stage 1 is basically a remix of Wily Castle Stage 1 from Mega Man: Dr Wily’s Revenge on the Gameboy. Even the music sounds alike. Pretty rad.]