When the assignment came down from on high to review Max and the Magic Marker, Destructoid’s illustrious founder, Niero, mentioned to me that he had been playing it over the weekend with his nephew and that they had spent their time crushing purple blobs with giant orange penises. It’s probably not what indie developer Press Play meant to have done when they came up with the child-friendly game, but that is one of the great wonders of games where the player is tasked with creating part of the game world.

After hearing about the purple-blob-crushing penises, I assumed a perfect 10 score and plenty of references to Destructoid’s titular catch phrase, “Also, cocks…,” were around the corner. How can one not score a game with purple blobs and orange penises of all sizes a 10? Find out how after the jump. 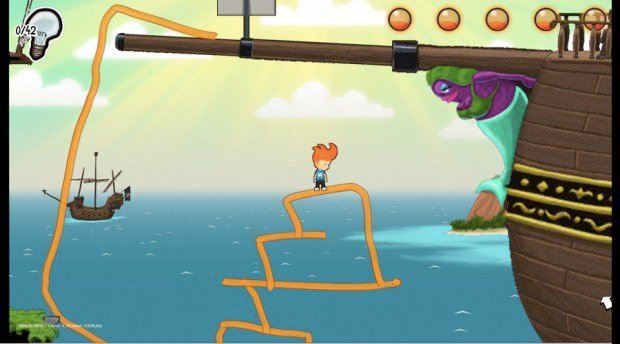 Max and the Magic Marker has the player using the Wii Remote’s pointer function to draw on the television screen. By doing this, the player can create whatever the heck they want to help Max through the game. This can lead to simply drawing a set of stairs to get up a ledge that is too high, or sketching the aforementioned penises falling on purple blob enemies in order to kill them. The latter comes into play because the ink has weight to it; the more ink you use, the heavier the object you are drawing becomes. This comes into play in a variety of ways and really shows off the game’s superb physics engine brilliantly. More on that later.

After being treated to an opening where we are introduced to Max as he draws his own adventure and creates an evil purple blob enemy named Mustacho, we are flung into his imagination where he has the power to use his magic marker to create anything he (you) can draw. The game is composed of three worlds, and each world has five levels. Other than the fact that Max easily interacts with everything you draw, the two mechanics that separate Max and the Magic Marker from other games of this style are the ability to freeze time (including Max) and the fact that your marker’s ink is emptied on multiple occasions throughout each level. 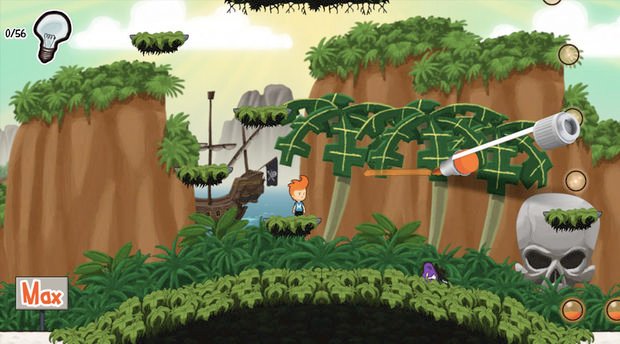 The latter really makes each level feel more like a group of mini-puzzles put together to make a level. Max collects ink orbs throughout the level that fill up his marker. However, every time you reach a checkpoint in a level, that ink gets taken away by Mustacho, forcing you to collect more ink for the next part of the level. This means that checkpoints are more like markers for the next puzzle or challenges you will have to get through, because each section between checkpoints has a limited amount of ink and a specific challenge to complete. You can always go back to collect other pick-ups and hidden items, but in order to progress forward, you’re solving the puzzle with the specific tools set before you. It’s kind of like taking a puzzle game where all the challenges happen on a single screen and turning it into a platformer. It works surprisingly well.

Unfortunately, the puzzles you’re tossed into aren’t too challenging or interesting for the first two thirds of the game. You’re basically asked to draw steps, boxes or lines in varying ways over and over again. Now, that could all be made more exciting by the player’s personal creativity, but when it comes down to it, the first two worlds’ puzzles just aren’t challenging or creative enough to warrant it. Creativity begets creativity; these puzzles simply task the player with the same thing in different forms that don’t seem very original. It should be mentioned that the hidden items in the levels (little black orbs that unlock extras if you collect them all) often involve some challenging and interesting platforming puzzles, but players shouldn’t have to go on side quests to find the best gameplay in the game. 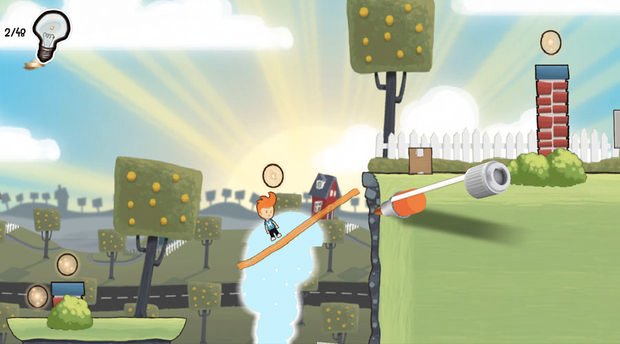 The third world does start to pick it up challenge-wise, but by that time you’re almost fully through the game. I can understand if Max was meant to be geared towards children, but even they would most likely find the levels a bit repetitive by the third world. It’s too bad, too, because the moments of puzzle brilliance that shine through are clever, and when the time-freezing ability is used to its full extent, it makes for a really interesting mechanic. Sadly, it just isn’t used all that much, and even the nice touch of the world becoming like a child’s drawing when time is stopped can’t help it.

It doesn’t help matters that the controls feel a little sticky. During some of the trickier parts of the game where timing was important, I found myself aggravated that Max wasn’t reacting as quickly as he should. Sometimes, jumping felt delayed and his response time to my input just felt a little slow. Mix this with some superbly annoying music in some of the levels and you have a game that can get quite aggravating very quickly — even when you’re playing well-put-together and clever puzzles. 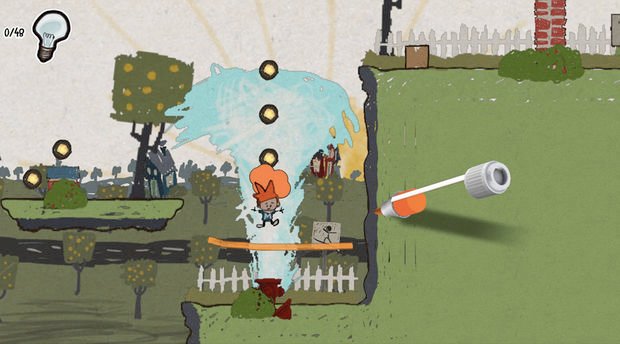 That being said, the physics in Max are superb, and it makes playing the interesting parts of the game tons of fun. Max’s interaction with the lines and shapes the player draws are some of the best I’ve seen in a game like this. Later on, when you are actually using all of your abilities to beat levels, this fact comes into play very well. There is an especially interesting level with spinning wheels that you have to hook a line to in order to launch Max across the screen to other wheels. Here, the game’s superb physics, time freezing and line drawing all come together wonderfully to show you the game you wish you had been playing for the first two worlds. When the game works, it works wonderfully, and the last world is almost enough to save the rest of the game.

As stated before, I can understand the general ease of the first two worlds since this game is marketed towards a younger set. However, I’m not reviewing this for a younger set; I’m reviewing it for Destructoid. As such, I can only say that the majority of this game does not live up to all it can be, and seeing the creativity and challenge that some of the levels in the third world show off only highlights this fact. What can be said about Max and the Magic Marker is that there is potential there, but potential doesn’t make for a game that anyone older than 8 would be very interested in.