I am a huge fan of Matt Hazard‘s universe. I love the ridiculous characters, set pieces and humor found in Eat Lead: The Return of Matt Hazard and knew as soon as it was over that I would need more. And now more has arrived in this downloadable adventure.

Instead of giving us another 3D, cover-based shooter, Vicious Cycle took a decidedly more simplistic route in Blood Bath and Beyond as a 2D side-scroller. Does it still retain the humor and charm of the original, or has the joke gotten old by now? Has the studio made a better game than a punch line this time? Why do I keep asking questions knowing that I’ll also be the one to answer them?

The answers to all of these and more await you in our review of Matt Hazard: Blood Bath and Beyond. 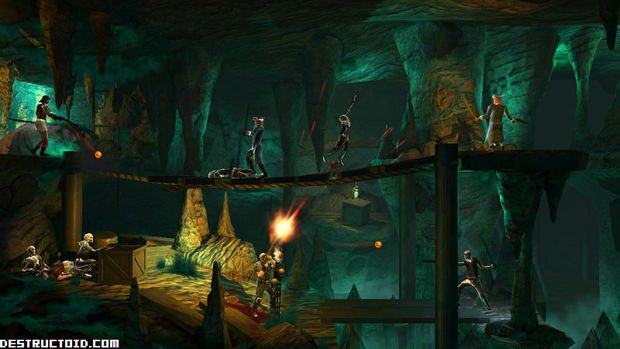 One thing you can definitely say about the development team behind Matt Hazard games: They know who they are and what their place in the grand scheme of things is. There are no grand aspirations with Blood Bath and Beyond. It’s a straightforward run-and-gun in the grand tradition of Contra, without a ton of frills or complications.

The story this time around is that one of Matt’s enemies, General Neutronov, has kidnapped the hero’s 8-bit self, planning to go back in time and kill him before the Matt Hazard series can become a success. Conversations between Matt and Quentin (the majority shareholder of Marathon Megasoft and support character from Eat Lead: The Return of Matt Hazard) carry the plot along through text boxes.

It’s in these conversations that we see where the focus of the humor has shifted. Instead of lampooning conventions of popular games, the lens is focused far more inward. Many of the jokes are self-deprecating comments on the low-budget development hiccups and other issues that would plague a smaller title like this one. They feel a lot more personal this time and, while funny, can be a touch bittersweet for fans of Eat Lead who wanted this series to be a success.

The jokes don’t always hit as hard as they used to, either, and the one-liners Hazard spouts do lack a little bit of oomph now that they are no longer delivered by Will Arnett. The replacement they found for him does a decent enough job, but you’ll have no problem noticing that the actor has changed. 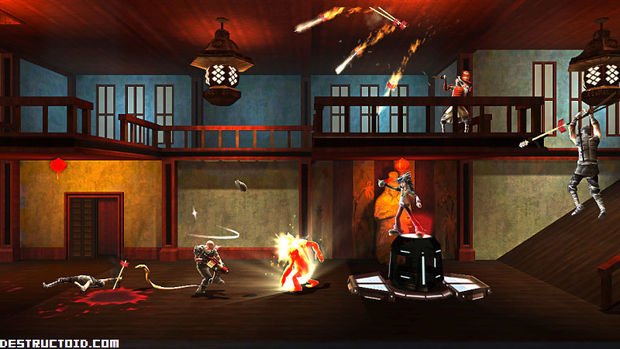 Blood Bath and Beyond runs eight levels in length and, just as its predecessor, contains a considerable amount of homage to other games. Fans of BioShock, Mirror’s Edge and Pokémon will all see their games represented here. Valve, in particular, is shown a lot of love in the game, with several references to their titles. Each level takes about ten minutes or so to complete, and you can have the game wrapped up in a couple of hours once you have the hang of it.

Playing is simple enough in terms of its mechanics. All you have to do is run from one side of the screen to the other and kill anything that moves. Enemies exist in the foreground and background, and pulling one of the triggers turns Matt’s aim towards the back of the screen. In addition to his basic gun, Matt has a limited number of grenades he can throw in any direction he can shoot.

Special weapons dropped by enemies or found in crates are exactly what one would expect from a side-scrolling shooter. Rockets, flamethrowers, machine guns and shotguns all make appearances, while some later levels feature more technologically advanced killing machines, such as lasers and plasma rifles. In addition, killing enemies builds up the “Hazard Time” meter, which, when full, allows Matt to become (mostly) invincible and triple the firepower of whatever weapon he’s holding. 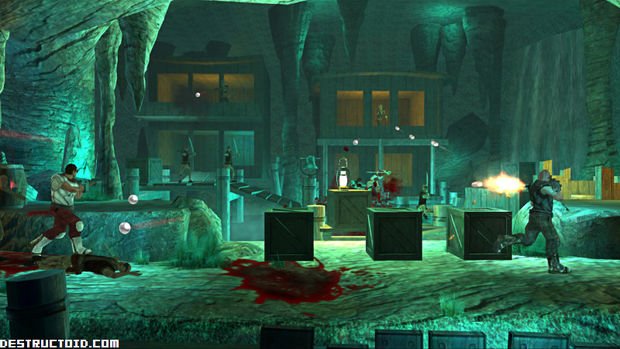 The game’s three difficulty levels have two major differences between them: the amount of damage Matt can absorb, and the number of continues the player gets. “Fuck this shit,” the most difficult setting, offers no continues, and any hit will kill. In the middle, “Damn this is hard” gives five continues across the life of the game (it autosaves between levels, allowing you to retry if you fail but not awarding any more than the total of five continues) and makes things a touch easier with only certain things able to kill in one hit. “Wussy” lets you continue as often as you like — with a point penalty for doing so — and takes a lot of damage to kill the player.

A two-player co-op mode does very little to make the game any easier. The chaos of having a second player on screen cancels out any benefit you might have had from their additional firepower, and it’s pretty easy to get lost. Dexter Dare, Hazard’s partner, is a bit funnier than Matt, however, as he tries vainly to create a badass catch-phrase of his own. It would have been nice to feature drop-in/drop-out co-op, which the game lacks, but you can steal lives from your partner if you’ve run out, something I can’t recall seeing in a game in ages.

Blood Bath and Beyond is challenging, make no mistake. I doubt that I will ever play the game on its highest setting beyond this review, but the mid-range is not overwhelming and offers a satisfying amount of difficulty. I never felt frustrated with the difficulty, although certain items in the environments that instantly kill — even right after respawn when invincible to everything else — can be a bit annoying.

Two mini-games exist within the package. During levels, you can collect coins for use in the between-level pachinko games for bonus points. An unlockable game in the style of Lunar Lander is also available upon completing Blood Bath and Beyond. And the title features collectible box art from the fictional Matt Hazard games with descriptions of their historical significance when found through play, which is a neat touch. 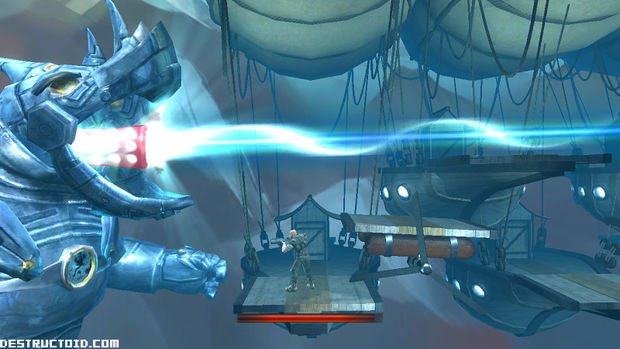 Matt Hazard games do not need to do anything new with videogames. The originality of the series comes out of pointing out the ridiculousness of our hobby, something I personally feel we should be supporting. Blood Bath and Beyond falls neatly into that criteria. The game brings nothing new to the table except more of the fourth-wall-breaking humor that Eat Lead managed so well. That it happens to be packaged in a fun, well-designed and challenging shooter is a nice touch that exceeded my expectations.

As a final note, I’d like to make special mention of the game’s conclusion. I won’t reveal it, but the title has a post-credits ending that does the exact opposite of what almost every other game is expected to do in its final moments. Beyond a breath of fresh air, it will provide a chuckle for some and a tear for others. Well done, Vicious Cycle. Well done, indeed.