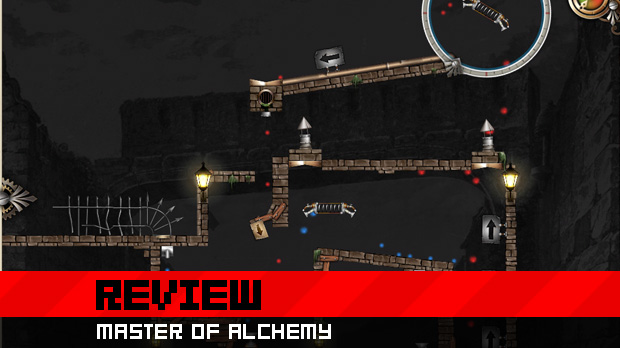 My grades in school for science were very low. In chemistry class I clearly recall the professor making fun of me in front of the class for my inability to grasp what he was trying to teach us. Dick.

Knowing this, you could understand my concern when I was told I’d be reviewing a game called Master of Alchemy. Luckily the game has a lot more to do with creative puzzle play and a lot less to do with the periodic table. That said, a lot of the game play revolves around the changing of substances from solid to liquid to gas. I sometimes felt a mental block creeping up, but I powered through and found that Master of Alchemy is a very good puzzle title for iPad.

Read on for our full review.

Master of Alchemy is a puzzle game of multiple stages where you’ll use a set number and type of devices to manipulate matter to move it into specified containers within a set time limit. For instance, a steady drip of red (fire) liquid would have to be harnessed as a gas into a container. Let’s say that the container was mounted to a ceiling, next to the drip source. What would need to happen is the placement of a device called a crucible, which will boil off liquids and send gasses floating up from its exhaust nozzle. You’d have to select and drag a crucible from a menu on the left side of the screen, drag it into position, and then watch the gas segments float up to fill the container to its requirement. 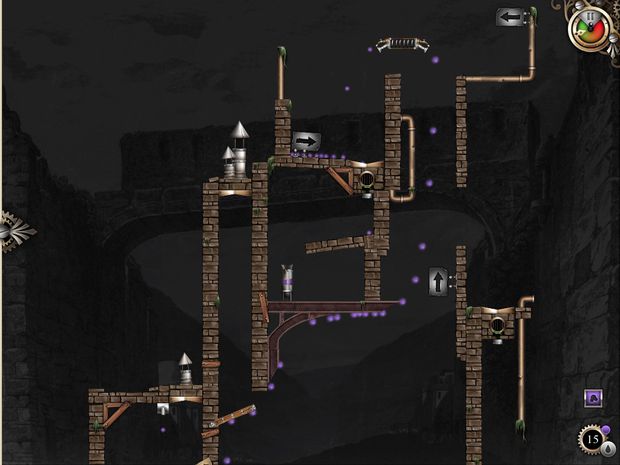 Of course, game complexity escalates at a steady pace as you complete a stage and move onto the next. You’ll work to change the state of a given matter multiple times, and it gets even more complex as when you add in two other colors of matter, adding yellow and blue to the red. You’ll find that colors will cross paths as you guide their flow (or float) to their destinations, but you’ll have to keep in mind that running the wrong color into a goal will contaminate it, so you’ll have to be extra careful to not mix. At the end of the stage you’ll be graded on this purity as well as your total time, accuracy and other key markers.

The levels are mostly vertical, and play off each matter’s properties, wtih solids and liquids falling down from gravity, and gasses floating up. Aside from the coils and crucibles that change the state of matter, you’ll use other items, like timbers, to guide each matter type to where you need it to go. It gets quite crazy with several types of matter flowing or floating across each other, with only a handful of tools to use and the clock ticking away in the background. For as hectic as it sounds, it’s quite addictive, and you’ll find that you’ve plowed through at least a dozen levels in your first sitting. You’ll eventually gain access to more complex tools that will help you combat more complex obstacles, working through some 60 levels. 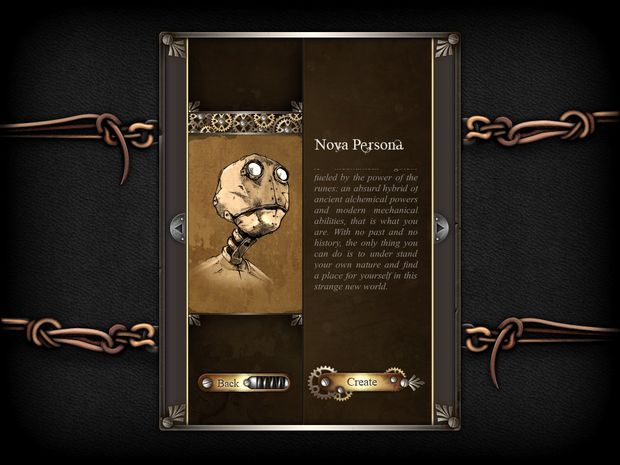 Master of Alchemy has a really nice look. There’s little in the way of backgrounds, but the level art is nice, and has a strong steampunk vibe that fits nicely with the whole alchemy vibe. The icons, menus and character art are sharp and stylistic, and when you combine this with the physics behind the matter, you have a very nice looking iPad game.

Just like science class, Master of Alchemy is not easy. But it is quite a bit more rewarding, especially in the later stages, where you’ll find yourself frantically swishing your fingers across the iPad screen, trying to figure out what goes where. While your typical iPad game looks great, ones this polished in both looks and gameplay are still few and far between. Recommended.