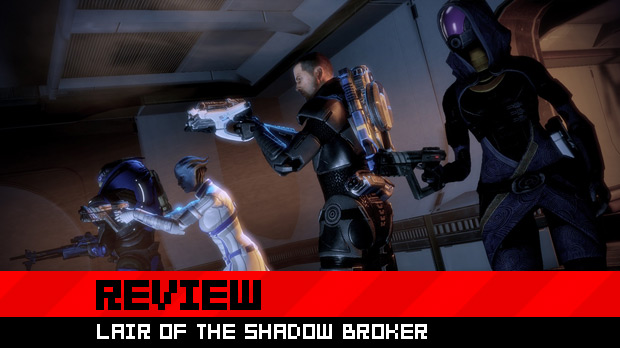 Better late than never! The latest piece of DLC for Mass Effect 2, Lair of the Shadow Broker, was released last week. As it is priced at 800 points, more expensive than any of the DLC to date, the obvious question is: is it good enough to be worth 800 points? I mean, for that money I can get a good XBLA game or 2/3rd of a Modern Warfare 2 map pack with rehashed maps!

Luckily, Lair of the Shadow Broker is the best Mass Effect 2 DLC to date. Lasting a little longer than the Overlord DLC and without any of the Hammerhead ‘hunting for artifacts’ time filler, Shadow Broker is perhaps the only piece of DLC you need to play before Mass Effect 3 is eventually released. Read on for a mostly spoiler-less review.

Without going into too much detail about the story, Lair of the Shadow Broker brings you back to Illium to reacquaint yourself with Liara. Sadly it’s more about business than pleasure, as Cerberus has sent you some intel about the Shadow Broker, the primary enigmatic underground information handler in the Mass Effect universe. Liara has spent the better part of two years trying to hunt him down, as “it” took something precious from Liara and she is kind of a bitch about it.

You may recall the Shadow Broker through one of his contacts on the Citadel, Volus financial adviser Barla Von, who helped you on your mission against Saren in the first Mass Effect. At the time, Barla Von gave you the information about Saren’s rogue status for free because Saren had betrayed the Shadow Broker.

The mysterious Shadow Broker pops up again if you decided to do the Cerberus missions in Mass Effect. After raiding a Cerberus base on Nepheron, one of the Shadow Broker’s agents contacts you on the Normandy offering to buy the Cerberus files you managed to grab on Nepheron. Admiral Kahoku had apparently promised these files to the Shadow Broker in return for information about Cerberus locations. As a side note, Kahoku is mentioned in Mass Effect 2 on a Citadel news feed where they talk about Cerberus being involved in his death.

The DLC summarizes parts of these events from Liara’s perspective as you approach her with the new intel. Of course, in a typical BioWare quest progression, things don’t go exactly as planned when it all sounds too easy. Pretty soon you find yourself doing some detective work in another part of Illium before the action starts. You get to play an Illium cab chase (think Attack of the Clones’ Coruscant chase) and fight a lot of Shadow Broker agents before finding actionable intel on the Shadow Broker’s location.
From there, it’s on to the titular Lair of the Shadow Broker. I’ll leave the specifics for you to find out, but from that moment on it is all action. And the action is some of the best in the game’s missions to date.

Describing exactly what makes the action gameplay so good is not an easy task. For starters, the entire DLC mission is paced extremely well. You start off slow enough, but still with a bang. The following cab chase is fun enough, if a bit simplistic. But it’s nice to see BioWare experiment with some other vehicular gameplay outside of the “tank thing on planet” type of gameplay. The combat however is what makes it so much fun.

Liara is a permanent member of your squad for the duration of the DLC mission. Since most of the Shadow Broker forces are basically elite Eclipse soldiers, you should know what to expect by now. They consist of basic shieldless soldiers that are cannon or Biotic/Tech fodder, lots of soldiers with shields and quite a few Vanguards and Techs. Liara doesn’t have any Incinerate or Overload skills though, so you had better bring a Mordin or Miranda with you if you lack those skills yourself.

The most useful skill Liara has is a Singularity. Basically it’s a miniature Biotic black hole that casts pull on an area of effect surrounding it. If you played Overlord with a Tali/Legion squad, you know the drill: wipe out shields, then cast the area skill to render a whole group useless and at your mercy.

So far that probably sounds pretty much like what you are used to from playing Mass Effect 2. Where it adds to the gameplay though, is the amount of shielded and barriered enemies you will encounter when things get hot. Although the difficulty is not impossible by any means, even on Insanity, you will definitely find yourself having to pay attention to the flow of the battle more than usual.

The pacing and locations also help a lot in this regard. Going through the Illium parts of the mission feels like a slowly increasing crescendo by itself. But making your way inside the Shadow Broker base and the lead up to the inevitable confrontation (if he is even there!) makes you go from “I can do this” to “Holy shit this is great!” at a very fast pace. Every corridor inside the base leads you to some combat confrontation one way or the other, and the mission does a great job at feeling like you are in for a damn good fight.

In fact, the combat as it is presented in this mission is perhaps the best in the entire game to date. It only occasionally lets up to give you a small breather before you get plunged back into another big fight. Add to that a very story oriented mission that explains missing bits and pieces about the period between Mass Effect and Mass Effect 2, as well as some revelations about events from Mass Effect that show them from a different perspective, and you have a classic Mass Effect 2 mission in your hands.

Then there is the option to dig through the Shadow Broker’s email dossiers about your entire team and some of the organizations like Cerberus, which can easily take you half an hour to read through. These are not obligatory for anything, but they are definitely worth it if you are invested with the universe.

All these things together help Lair of the Shadow Broker to be easily regarded as the best piece of DLC for Mass Effect 2 there is. Sure Kasumi gave you the Locust SMG and an annoying version of Zaeed. And Firewalker was nice as a set-up to Overlord, which in turn was good enough by itself. But all of those missions only served to expand upon the Mass Effect 2 universe, specifically character and Cerberus-wise, instead of actually enriching the main storyline in the way Shadow Broker does.

Still, there are some things where the DLC won’t fulfill all of your desires. While there is plenty of story to go around and while the mission ends in a set-up to events in Mass Effect 3, it does not give you a huge amount of information. It is also still just 2-3 hours of extremely well paced Mass Effect 2 fun. Which is great if you are a fan of course. But if you are not and you hated the Jack and Mordin loyalty quests for instance, it’s not going to turn you.

As far as adventuring goes, there is not really much to explore or to waste time on. But then again that is just the Mass Effect 2 design. As I haven’t played any of the Dragon Age: Origins DLC yet, I can’t comment on how it compares to that. Personally I like it if DLC adds to the world and makes the world feel larger because of it. I didn’t really get that feeling here, outside of the more fleshed out Illium. Suffice to say that this piece of DLC is bliss, but still carefully scripted bliss.

Liara being back for one mission will be hit or miss for most of you. Yes, she is awesome to have in your team, but mostly for variety and nostalgia’s sake. If you had a romance with her in Mass Effect, you can use some Paragon actions to act like the reflective and comforting friend. Because this is a videogame, you can use you that to have a (kind of) sexy after party if you go down that Paragon route. For some reason this doesn’t end you up in the feared Friend Zone. It also doesn’t seem to matter if you are already in a Mass Effect 2 relationship. Because it’s a game! What a great universe to live in.

Being a Renegade dick just means you are all action and business, with no time for pleasure. I didn’t find that there was a whole lot of difference between the two routes, other than the obvious Liara interaction. Then again I tend to look at those things in terms of cost/reward instead of actual role-playing. It’s still worth playing through it twice with the Paragon and Renegade character you probably still have on your saves, just to have a richer save game to export to Mass Effect 3.

Finally there was no hint of a future Mass Effect universe where I can see Tali and Legion land on their homeplanet with the Quarian/Geth alliance rebuilding taskforce. Where Tali can then finally take off her mask to bask in her native world’s sunlight, as Legion makes a joke about meatbags being silly and emotional. BioWare take note, if that isn’t in Mass Effect 3 my rage will reach to the Sea of Storms!

All in all though, Lair of the Shadow Broker is about as good as you can hope for with Mass Effect 2 DLC. Both in terms of ranking as one of the best missions in the entire game so far (perhaps even the best) and in how it offers a good amount of resource support if you do the mission early on in a future playthrough.

If this isn’t going to be part of the DLC to be included in the PS3 version of Mass Effect 2, it will still be worth getting it. At 800 points I didn’t feel cheated out of my money in any way, but it was still stretching how far I want to go with pricing for DLC missions or episodes. And if you loved Mass Effect 2 , this is absolutely required if you didn’t already get it. An example of how to do great, if not perfect, DLC in a story-driven game.

I leave you with a haiku for Liara: