Most RPGs these days are stale, boring and almost impossible to differentiate from one another. They all trot out the same turn-based combat, the same angst-ridden characters, and the same “save the world from ultimate darkness” plot that has barely changed since the early eighties. This is why the Mario & Luigi RPG series has always felt like such a consistent breath of fresh air.

Sure, the games themselves tread on familiar ground with each new chapter, but the focus on fun gameplay, laid back narrative and gentle humor has always made the franchise stand out and prove to the world that RPGs don’t always have to be about 16-year-old androgynous boy-heroes who must fight a brooding and/or flamboyantly camp supervillain. 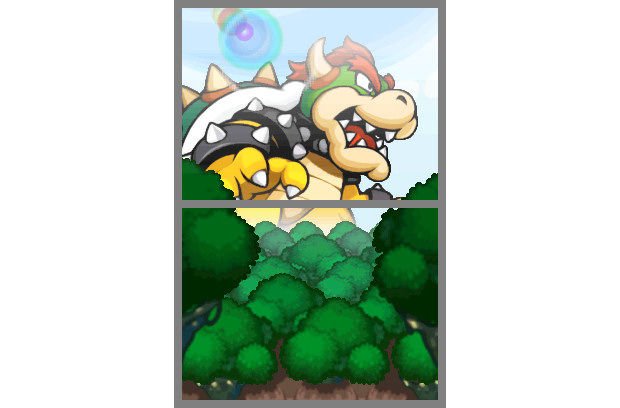 As the name of the game alludes, this latest in the series tells its story from literally inside Bowser. Lord Fawful, the Engrish-speaking lunatic from Mario & Luigi: Superstar Saga, has made his most welcome return as the main villain of the piece, having tricked Bowser into sucking Mario, Luigi, Peach and many other Mushroom Kingdom denizens into his own body. What follows is an Inner Space style adventure, as Bowser and the Mario Bros. work in tandem to defeat Fawful and rescue both the Mushroom Kingdom and the Koopa Kingdom from the Fawful’s nefarious grasp.

Players will get to control not only the Mario Bros. as they try and escape Bowser’s innards, but the king of Koopas himself. Gameplay with Mario and Luigi is instantly familiar to fans of the series, as it remains almost completely unchanged from previous games. As usual, the turn-based battles are made a little more interesting with the Bros. able to increase attack power and perform counters with well-timed button presses. It is fun, if somewhat repetitive, gameplay that makes the usual drudgery of turn-based combat a little more exciting.

The Bowser gameplay works in a similar way, but is far more enjoyable, and Bowser himself acts as brilliant comic relief. His self-aggrandizing attitude and desire to solve all problems with his fists makes for some genuinely funny moments. Battling with Bowser is incredibly satisfying, with his special attacks performed via simple, unobtrusive touch-screen controls his regular attacks feeling suitably meaty and powerful. There are also moments where you get to control a giant-sized Bowser, turning the DS on its side (think Hotel Dusk) and taking part in huge-scale touch-screen combat. 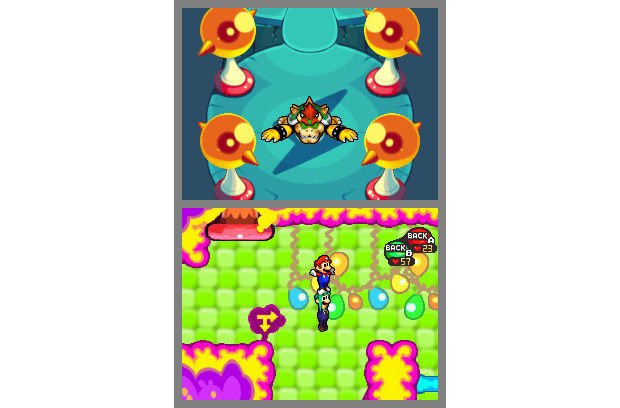 The unusual partnership between Bowser and the Bros. makes for some interesting tandem combat. Smaller enemies can be sucked into Bowser’s body with some frantic button-mashing, and those monsters successfully swallowed can be neutralized by Mario & Luigi. Not only does this help to make battles easier, it also shares experience and lends a little extra strategy to the proceedings. As great as this mechanic is, I would have liked to see this dynamic take on a deeper, more tactical role within the game, as it seems little more than a shallow gimmick for the most part.

Speaking of interesting ideas that could use more depth, the puzzle aspect of this particular installment in the series is a little disappointing. Having Bowser and the Mario Bros. work together could have paved the way for some really interesting gameplay, but sadly it’s not fully realized throughout the experience and much of the game feels like two separate games taped together as opposed to a fluid, intertwining adventure. Clever ideas, such as Bowser drinking water to allow the Bros. to swim around, and having Mario and Luigi take part in rhythm-style minigames to pump up Bowser’s muscles, have real potential and could have paved the way for some exciting new gameplay. Sadly, however, the new ideas rarely stick around for long and don’t get expanded very well.

When the new ideas do crop up though, they are accompanied by the game’s one truly irritating aspect — the fact that it’s insanely overburdened with tutorials. Some of them are optional, but a fair few aren’t, and all of them use at least twice as many words as was needed. The action is frequently halted while the game patronizes players and forces them to practice a gameplay mechanic that really isn’t very difficult to grasp. I know the game has to appeal to children, but not even a child needs to be talked down to quite so much.

These gripes, however, are just that — gripes. They are minor inconveniences in what is, above all, a most splendid game. The mix of slow, methodical, isometric Bowser exploration and quicker, platformy 2D action of the Mario Bros. makes for a game that’s consistently fun and very difficult to tear one’s self away from. The silly dialog is “laugh out loud” funny on more than one occasion, thanks to the ego of Bowser and the ridiculousness of Lord Fawful’s speech patterns. 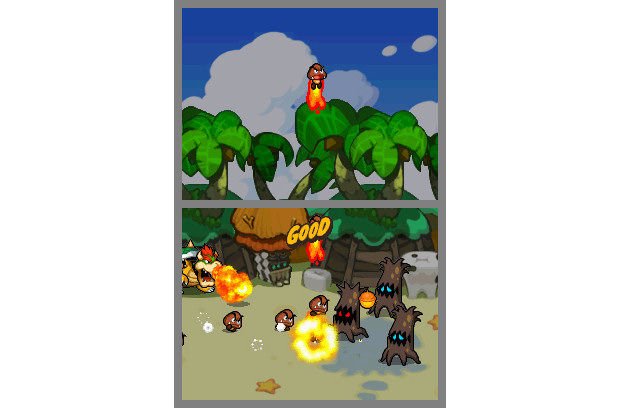 The vast majority of the game is spent having fun. The aforementioned rhythm-game sections are particularly well crafted, with players having to time jumps or mallet-swings to make muscles move and pump adrenaline. Such moments are when Bowser’s Inside Story truly shines, converging the gameplay and making the conceit of the narrative really shine. Even without living up to its potential, the game still manages to be brilliant, and it’s immeasurably difficult to find many negative things in what the overall package provides.

Inside Story is also incredibly beautiful, possibly among the best looking DS games ever made. The bright, vibrant colors and impressive animations prove that DS games need to keep away from polygons and stick to sprites. The silly sound effects that represent the speech of Mario, Luigi, Bowser and Fawful are also spot-on, while the music will rattle around in one’s head for hours after playing. More importantly, it’s always a delight to hear Bowser roar “Showtime,” before each battle.

If you possess Nintendo’s dual-screened handheld, then you really should be playing this right now. Mario & Luigi: Bowser’s Inside Story is everything good about owning a DS. It can get a little repetitive and patronizing, but the terrific writing, tight gameplay and genuine humor make it a true winner. Whether you love RPGs or not doesn’t matter. This is a game designed for everybody, and everybody should love it.

Recommended without even the slightest trace of doubt.