Late last summer, we received official word that a Magic: The Gathering Xbox LIVE Arcade title was slated for release. At the time of the announcement, I was learning the game. Figuring out how to tap lands, what the hell “Fear” does, and when to use an Instant isn’t easy work. It requires passion and patience — curious, considering those two elements usually only grow from being intimately involved with something you already understand. Still, I managed to navigate the steep learning curve with the help of friends and a 500-page instruction manual.

I’m not a professional spell slinger. I don’t chill in University basements or visit trading card shops. But I’m pretty sure I understand the game enough. After all, that manual hasn’t moved from my cluttered desk for over a year.

That announced title, now known as Magic: The Gathering: Duels of the Planeswalkers, debuted on Xbox LIVE Arcade a few days ago. I felt it was my duty to review it, considering I started learning the game with the digital release in mind. 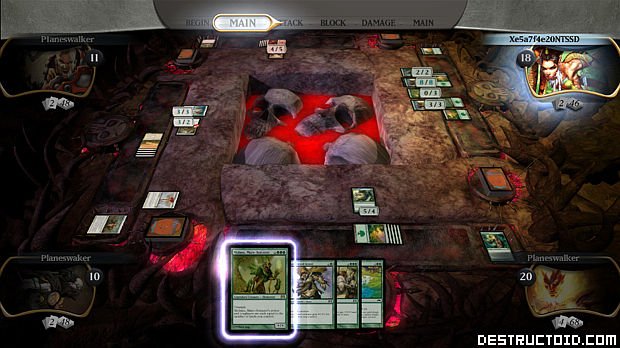 Magic: The Gathering: Duels of the Planeswalkers is geared toward people who haven’t played the trading card game. The coddling begins from the onset of the campaign mode. Its greeting is a slow-moving tutorial that drips information like oily peanut butter slides from a jar. Frequent rule reminders haunt play with pop-ups until you tell the game you’ve learned whatever morsel it’s spoon-feeding you. This isn’t a bad thing: Magic: The Gathering takes weeks to learn and an adulthood to master. Most people don’t know what the trading card game is about, much less how to navigate its labyrinthine rulebook. But in identifying that newcomers will need extensive help in order to beat the learning curve, Stainless Games created a snag: if you gain enough experience with the game, you realize that it’s not really offering you anything. As I relearned Magic’s nuances, I found myself wanting more customization and flexibility — two things Duels of the Planeswalkers doesn’t offer.

In Magic, you play as a sorcerer. You can do two things: summon creatures and cast spells. Like the trading card game — and painfully so at times — Duels of the Planeswalkers leaves everything to your imagination. There are no fancy 3D renderings of monster battling or Life Point sucking. It’s a strictly copied digital recreation of the trading card game you may play on a scuffed coffee table or in some underground lair. This approach has its charms: there’s no arguing over turn phases or rules. The game automates everything cleanly. But it makes for a bland presentation. The only thing you won’t recognize from your own real setup is the tabletop. Stainless Games have created something more spectacular than said scuffed coffee table. It’s a nice touch. 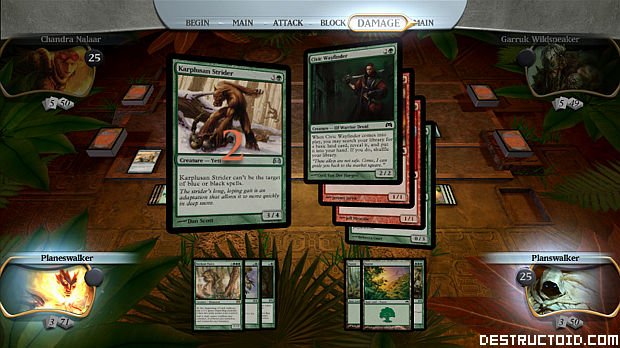 The recreation of the actual game extends to the cards. Each one is a perfect copy of its real-life counterpart, right down to the silly quotes. Within these cards is the key to winning, losing, and, well, simply experiencing Magic: The Gathering. Duels of the Planeswalkers has a variety of modes, both offline and online, that you can play. The variety is game’s strongest suit, and also its weakest. This duality is a result of the cards it gives you to play with and the limited amount of things you can do with them outside of the competitive play. At the beginning of the campaign, you’re given two decks to play with. As you progress through it, you can unlock more decks and more cards. The problem is that you can’t edit your deck. Ever. Even if you unlock an additional card, you can’t apply it to another deck. The game only lets you subtract a card you’ve earned through play. It’s a silly gesture, too — the cards you earn are the good ones.

I often felt like my deck was on loan from a Planeswalker. Restricting editing options is an odd move. I can see why Stainless reduced it to basic theme decks: it’s much easier to learn the game with a fully constructed deck. But as I progressed and relearned the game, I ultimately wanted to create something that represents a style of play I enjoy. Half the fun of Magic is sculpting what I consider “my deck” that fits what I want to do in a match. 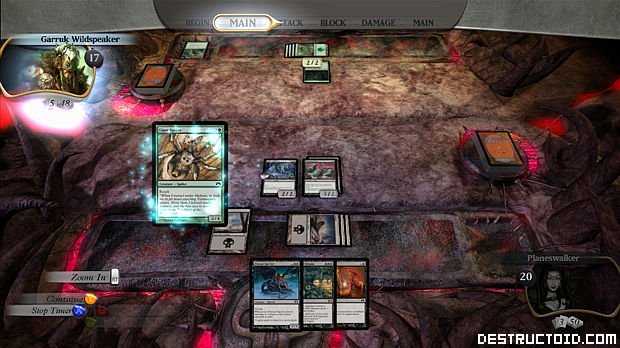 Yet, even with the restrictions, I had a blast playing cooperative (it’s a traditional two-headed giant mode) and the campaign. (The cooperative campaign, unfortunately, isn’t available for online play.) Nearly every foray into multiplayer was a loss for me, but I still found myself grinning — the core experience of Magic is intact.

So, here’s the deal: if you want a recreation of the Magic experience without having to fuss with booster packs or shuffling, or if you need a refresher on the M10 rules, Duels of the Planeswalkers should be a game to consider. If you’re a newcomer, I can’t speak to that. What I do know is that Magic: The Gathering is a challenging, complex and a rewarding game. It’s a blast to play. Duels of the Planeswalkers captures the core experience and wraps it up in a technically sound, enjoyable package. If you can deal with the lack of editing, download the demo. If you’re new, definitely give the demo a spin. You probably won’t be disappointed.