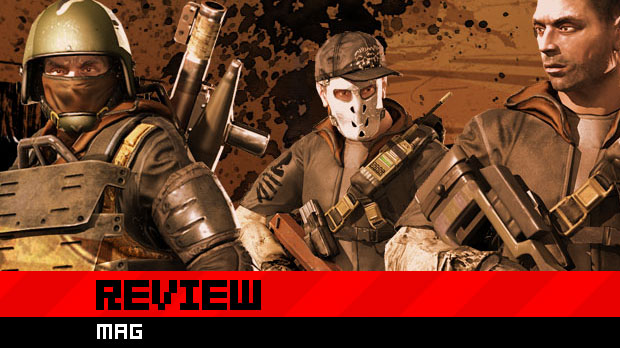 MAG, otherwise known as Massive Action Game, has never been short of ambition. Cramming 256 players into a single FPS multiplayer match is no small task at the best of times, but doing it on home consoles is unprecedented. Nevertheless, this is what Zipper Interactive has done with MAG. 256 players on a single map, battling for control of a persistent online world. Ambition, thy name is Zipper.

As with all lofty concepts, MAG was destined to either become a technological triumph or an overzealous disaster. Having spent many hours invested in the game’s huge battles, testing out all the game modes, and taking part in several gigantic matches with a full 256 players, I can now tell you which way MAG went.

Read on for the full review of Massive Action Game.

In the year 2025, the maintenance of a full-scale armed force has become such a burden that countries around the world have cut their military down to the bare minimum, just enough to defend national security. Not only that, but no nation’s military is allowed to leave its own country’s borders, effectively forcing world peace. Of course, this is a videogame, and violence always finds a way.

To get around the pesky inconvenience of global peace, the world gave rise to a variety of private military corporations who would work for anybody, allowing countries to continue their wars without violating any rules. The PMCs competed heavily for contracts, always trying to undercut each other, but the competition soon became vicious. PMCs actively began to attack each other, kickstarting the “Shadow War” as they tried to run each other out of business by straining supplies and raising budgets. MAG revolves around three powerful PMC factions — Raven, SVER and Valor — all of which now battle for supremecy of the global war market.

Players will choose to serve one of these three factions, and will be able to switch sides if they so decide. Each PMC has access to its own unique weapons and skills. Raven is a high-tech force from Western Europe that uses the most advanced equipment, but lacks real-world fighting experience. SVER is a patchwork collection of soldiers from the Middle East and Russia who make the best of what they have, while Valor is an elite band of mercenaries who employ standard military gear and excel at communication.

The factions are all fairly balanced and the differences are mostly aesthetic. During each battle, players will earn XP for kills and assists, completing objectives and healing allies or performing repairs. These points can then be spent on a skill tree to unlock new items and weapons. A very simplistic skill tree is in effect, allowing the player some measure of customization. For instance, you can focus on close-quarter combat, or pick skills to aid in sniping, or work on acquiring heavy armor to take on vehicles or perform defensive roles. Nothing particularly innovative or amazing, but it does the job and has enough content to satisfy fans of customization.

Players can save several different character types, allowing them to switch during respawns depending on their needs. It’s always handy to have a few various character types to tackle any given situation, although you usually won’t go far wrong if you stick with a machine gun and a medical kit. Characters are restricted by point limits, helping to balance them out and making sure that the heavily armored soldier doesn’t tout two rocket launchers, a shotgun, a medical kit and several types of grenades.

The game is split into various game types. Suppression is a simple deathmatch-style game. In this mode, PMCs fight amongst themselves instead of each other, as it’s been designed as a training match for newcomers. Sabotage charges factions with the task of capturing or defending two control points. When the attackers control two points, a third objective opens up, which the attackers must destroy. Acquisition is my favorite mode so far, as players must capture enemy vehicles and take them to transport choppers.

The main mode, however, is Domination. These matches are crucial to the game’s “Shadow War,” and each match will contribute to the success of each PMC on a persistant world map. 256 players are split into various platoons and squads, and each one will have its own attack or defense objective. The performance in each sector of the map adds up to total victory.

As a shooter, MAG is very good at what it does. The HUD can sometimes be confusing and objectives aren’t made very clear during the heat of battle, but it rarely matters because MAG is just fun to run around in, shooting at enemies and hoping for the best. The core gameplay is conventional in many ways, but better for it. Fans of Killzone 2 will feel at home with the controls, and clear influences from established shooters like Call of Duty only help to keep the game smooth and dependable.

Be warned that the controls can take some getting used to, even for those used to PS3 shooters. Weapon scrolling is assigned to the R2 button while special items like grenades and health kits are scrolled with L2. Most players I have encountered so far haven’t even learned that medical kits exist, let alone know how to use them. It doesn’t help that scrolling is slow and it can be very difficult to revive a fallen player before getting shot down yourself. MAG struggles with communicating its ideas to the player. The ideas themselves are great, and the gameplay can be incredible fun, but MAG doesn’t tell its players just how much fun it can be.

In truth, it takes a game or two to get used to how MAG does things. Once you do, however, it feels great. Combat is quick without being chaotic, and heavy without feeling grinding or slow. The respawns can be lengthy because they are designed to let players attack in waves, which means you can sometimes respawn in three seconds, or sometimes wait fifteen. As a solid and addictive shooter, however, MAG delivers, and can be considered a very good game on just those merits.

Of course, it’s the size and scope of MAG that makes it more than just a shooter, and here is where Zipper Interactive has truly impressed. Despite the lack of player information and sometimes confusing objectives, the huge scale of the battles has been produced expertly and works out incredibly well. Zipper’s decision to split the armies into squads in order to keep 256 players from congesting the map was very wise and keeps the game feeling huge but not overwhelming. Sometimes this can lead to large sections of map with nothing going on, and sometimes it can lead to choke points full of too much action, but generally the balance is impressive.

Much of the enjoyment of MAG relies on communication. Each faction is split into squads and platoons, with players designated as commanders. A full company of 128 players will be made up of four platoons, each of which are made up of four squads, each of which are made up of eight players. Squads, platoons and companies are led by designated players who will not only be responsible for giving orders, but who will also get special command abilities that can have significant effects on battle, such as increased respawn rates or various buffs for allied soldiers. Of course, players who don’t communicate or want to help out allies in way can have a pretty significant effect on the battlefield, so be aware that sometimes you’ll be on a losing streak and it won’t be your fault.

As well as the typical running and gunning, there are also vehicles and turrets to control. Players can ride in tanks and APCs, and switch to available seats to either drive the vehicles themselves, or utilize gun emplacements. The vehicle controls work very well, and are surprisingly balanced as well. Tanks and turrets are significantly powerful, but can be destroyed fairly easily with dedicated enemy fire, meaning that nothing remains too overpowering.

The whole Shadow War aspect is very promising, and will need several weeks of community input in order to take shape. At this early stage, however, it’s clear that the lasting effects of player battles will keep drawing players in, not to mention the customization and the simple joy of feeling like your in-game actions affect more than just the single match you’re playing. It only takes a short amount of time to start feeling attached to your company, and invested in the game’s changing world. MAG has all the tools to keep players hooked, and those tools are very well crafted indeed.

With such a huge game, there are some obvious graphical trade-offs. MAG does not look as beautiful as some smaller shooters out there, but this is made up for with a pretty striking art style that reminds me of Criterion’s Black in many ways. The three PMCs have very distinguishable looks, with Raven especially making a good visual impact. Unfortunately, I noticed a few glitches involving dead bodies spasming uncontrollably, and one player fell through the floor. However, these glitches are few and seem mostly harmless.

Massive Action Game delivers on the promise of its name. It’s certainly massive, and there is more than enough action to go around. MAG‘s biggest draw, however, is that it’s perfect for both hardcore multiplayer FPS fans and newcomers alike. Those who want to get invested can go for objectives, delve into the Shadow War, and become commanders, while those who just want to run around and shoot the nearest enemy can do so. The battles are so big that everybody can be catered to, and players have the freedom to experience MAG in any manner they which, with any level of involvement.

Most importantly, however, is the fact that MAG‘s concept works. It works very well, in fact. What more could you want?