It’s been nearly eight years since 2K Czech, then known as Digital Illusions, released Mafia: The City of Lost Heaven for PC. It was released at a time when Rockstar’s Grand Theft Auto III had turned the industry on its head, and it was similar enough to garner the attention of gamers because of it.

But it made a name for itself by carving its own niche — a more realistic portrayal of a criminal lifestyle, a more streamlined narrative experience. All of this was set in a beautiful and impressive open world that was different enough from Rockstar’s hit to turn heads.

Well over three years in development, Mafia II is hitting store shelves, and much has changed about about this particular genre over the past decade. Does 2K Czech prove itself as a contender once again, or does Mafia II fall short of gamers’ expectations?

The son of an Italian immigrant, Vito Scaletta lives in Empire City among the poor, his family struggling to make ends meet. What’s an Italian living in America during the 40s and 50s to do besides turn to a life of crime? More specifically, Vito hooks up with the Italian American mafia, working to make a name for himself and a few dollars in the process. But Mafia II is far form a rags to riches story, instead the tale of a young criminal whose ties to the underworld never really advance past that of mobster middle management. In many ways, the entire game mirrors this narrative, just good enough to get by, yet never truly shining bright enough to quite be called “Don.”

At its most basic, Mafia II “makes its bones,” so to speak, by being competent in most of the areas where the core gameplay matters. It can be broken down into three categories — shooting, driving, and melee. The gunplay is more than adequate, with decent snap-to-cover and precise hit detection to match guns that have a nice, solid kick. Car buffs will love the selection of highly-detailed classic cars scattered throughout Empire City, each of which handles as well as expected for their specific eras. 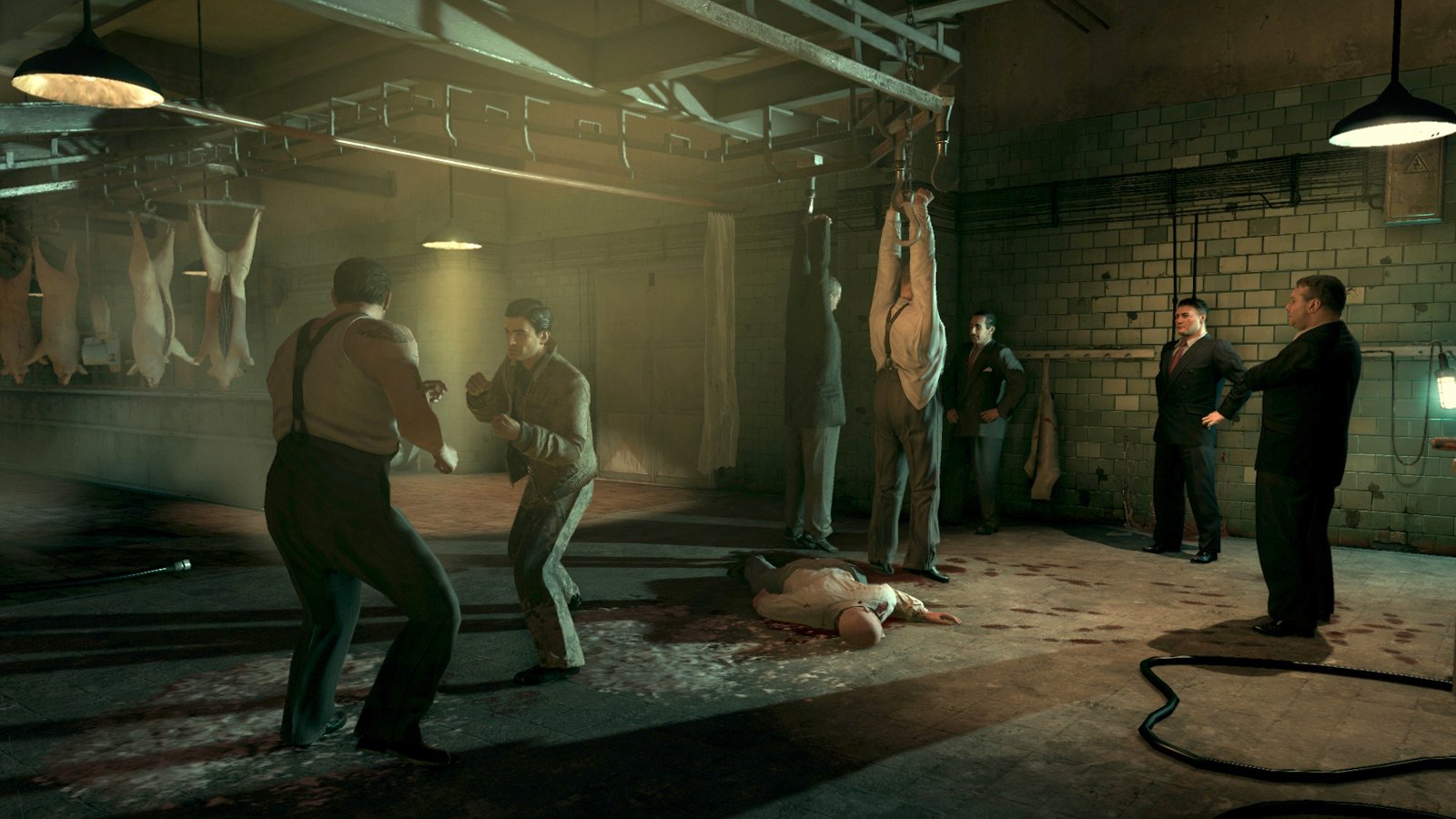 Melee combat doesn’t fare so well, however, a three button, mash-a-combo system that seems shoehorned into the game simply to move along narrative in a few instances. Outside of these forced melee sections, you’ll almost never find yourself using it, and that’s fortunate — it’s not a particularly fun or interesting diversion

So it’s a good thing that the best of what the gameplay has to offer — the driving and the shooting — is what you’ll be doing most of across the game’s 15 chapters. Of the two, expect to be doing more of the former than the latter. Yes, in a game about the life mobsters, you’re going to driving cars more than shooting guns. Perhaps it’s a more accurate portrayal of the mafioso lifestyle; it can’t all be high profile, heart-stopping shootouts, can it? Sometimes you just have to pick up a friend from his apartment and drive him to a restaurant, where you’ll be asked to drive to another location to pick up another guy to drive to this other place to do this thing. Unfortunately, as you would suspect, this isn’t particularly enjoyable in a videogame.

Yes, there are a handful of exceptional shootouts in Mafia II, many of which take place in some damned cool instanced interiors. But the ratio of driving to actual action is obnoxiously uneven, the balance tipping dramatically towards sitting behind the wheel of a car. These aren’t high speed vehicle chases, either, although there are one or two sprinkled throughout the game. I’m talking simply driving from one place to another. And because it’s to your benefit to keep the cops off your back, you’ll want to drive almost everywhere relatively slow; there’s even a “speed limiter” function that will keep you puttering along at the legal limit. (Don’t worry about other laws like stopping at red lights; although your in-game buddy Joe loves to comment about you blowing them, the police don’t seem to care.) 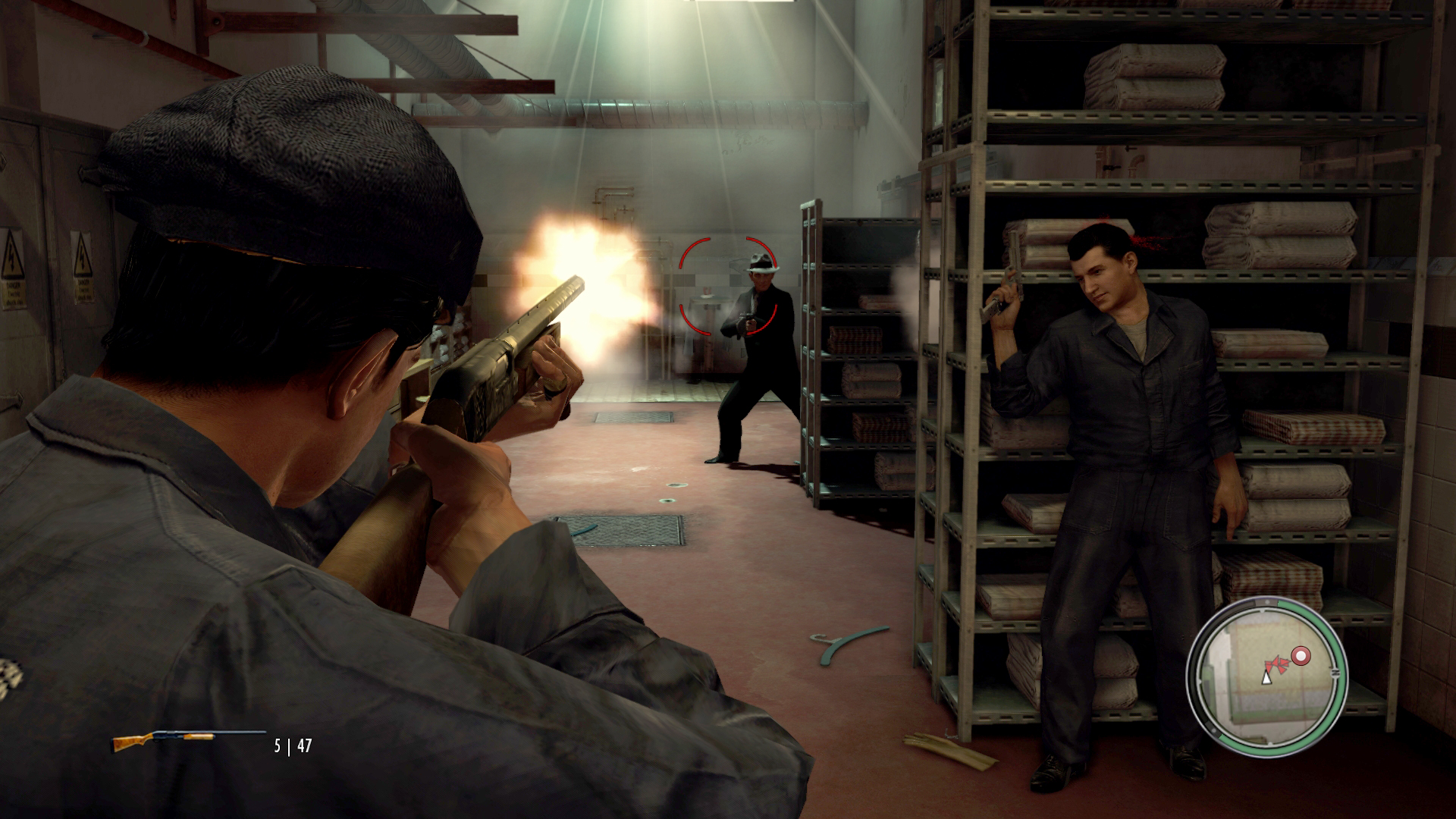 It needs to be made clear that despite taking place mostly in the open world of Empire City, Mafia II is not a sandbox game. Its linearity is intentional on the part of the developer, the story unfolding in a very specific manner from chapter to chapter. In a way, this is beneficial for folks who prefer to have the narrative fed to them deliberately, and it allows for the story to move at the pace in which the developer intended with no (arguably unnecessary) diversions. For some, Mafia II’s linearity may come as a welcome reprieve from the never-ending activity black holes of games like Saint’s Row 2 or Red Dead Redemption. But even given the intentions behind the game’s formal structure, it’s shockingly noticeable how little there is to do in Empire City.

It’s possible to count on one hand the stuff you can do outside of triggering main story missions, and the game does nothing to compel players to experience most of these activities. To make a little extra cash you can rob stores or sell cars for scrap at the Empire City local junkyard. Here’s the thing, though — outside of one mission towards the end of the game which may require this extra leg work, there’s no real need for in-game cash. Yes, there are things to buy — you can get a few new outfits, upgrade personal vehicles (you can keep up to 10 in your garage), or purchase weapons and ammo. But with most missions providing plenty of free firepower and most stock cars good enough to get you by, there’s little reason to engage in any of these extracurricular money making activities.

Mafia II can be completed in roughly 10 hours, with no additional gameplay content unlocked after the story is completed. Upon finishing the game, I had found two of the game’s much-publicized hidden Playboy magazines, of which there are 50 scattered throughout the game. I didn’t go out of my way to find these things, as there was no real incentive to do so. I was six hours into the game before finding my first magazine; the game never dangles the collectible carrot in your face, and I’m an adult who has seen a nude woman before, so I found no reason to start hunting for them. On top of this, there are 159 “Wanted Posters” tucked away through Empire City, but the criminal element needn’t fear — I only found one by the time I had put down the controller for the final time. 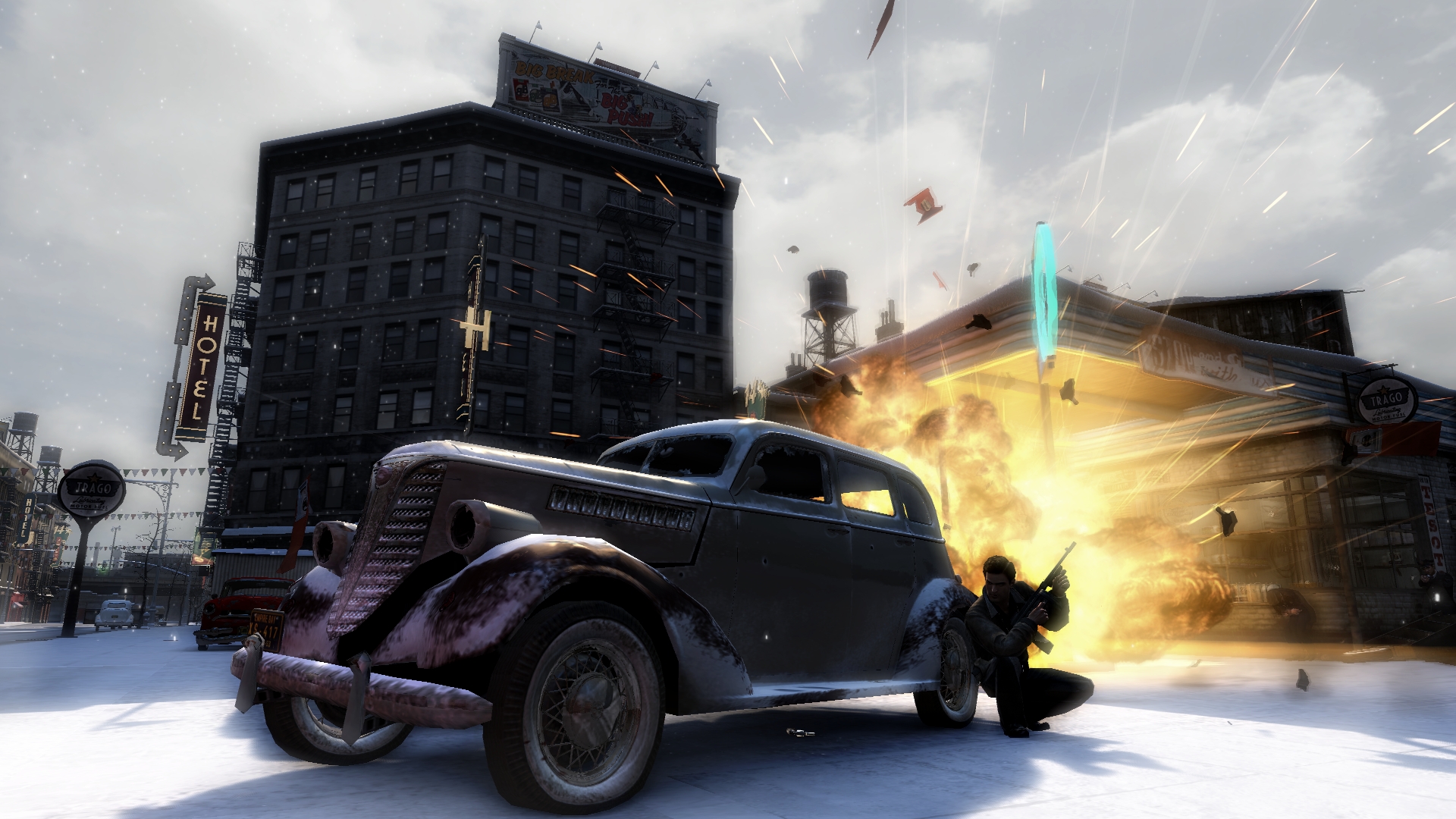 For all of its disappointments, Mafia II isn’t a completely throwaway experience by any means. The story is well told, oftentimes even gripping and strikingly emotional, despite being a pastiche of mafia tales you’re likely already familiar with from other media. The game’s dialogue is also surprisingly well-delivered, with impactful and fitting voice work throughout. 2K Czech’s Illusion Engine is also the catalyst for some gorgeous environments, notably the beautiful 1940s snowfall seen in the first half of the game. The licensed soundtrack is also a rare gem, with classic tunes evocative of the era and characters; it definitely makes all of the time you’ll be spending driving cars noticeably more bearable, sometimes even enjoyable.

Folks who love a decent mafia tale — one of family ties, betrayal, and revenge — will want to experience the world of Mafia II. Its competent game mechanics and absorbing narrative are enough to warrant a playthrough. But in the end, the repetitive nature of the game’s sometimes mind-blowingly boring missions and lack of content will leave most gamers wanting more.

While for this review I played the game to its completion on the PlayStation 3, I spent some time with both the Xbox 360 and PC versions for comparison. It needs to be said up front that the PS3 version of Mafia II is the least visually impressive of the bunch, missing a number of subtle game effects that were pulled from the game, reportedly due to performance issues. With the right rig, you’ll get the best visual fidelity on the PC (the “PhysX” stuff, as usual, looks great), with the Xbox 360 version trailing slightly behind.

But visual nitpicking aside, all of the games are functionally indistinguishable; the experience is going to be mostly the same on all three platforms. The PS3 version of Mafia II, however, features more content, due to the fact that all new copies ship with a unique code that will allow you to download a game add-on called “The Betrayal of Jimmy.” It’s this add-on content that makes purchasing Mafia II on the PS3 (if you have the option) a no-brainer.

“Betrayal” is exclusive to the PS3, and features mafia goon Jimmy in well over 20 unique missions that have a more action-packed, arcade-style slant than anything found in the standalone game. You’ll be scored per mission on everything from kills (including score multipliers), speed, drifting your car, and more. There’s a story here, but it’s really secondary to the action, which makes it feel wholly different than the stock Mafia II experience. After completing the ten-hour on-disc story, “Betrayal” is a welcome addition, one that encourages players to play and explore Empire City in a way the core game refuses to.

Score (Xbox 360, PC): 6.5 — Alright (6s may be slightly above average or simply inoffensive. Fans of the genre should enjoy them a bit, but a fair few will be left unfulfilled.)

Score (PlayStation 3): 7.5 — Good (7s are solid games that definitely have an audience. Might lack replay value, could be too short or there are some hard-to-ignore faults, but the experience is fun.)