Licensed retail games are bad enough, but nothing exemplifies “cheap crap” quite like Xbox Live Arcade. With lower expectations come far lower standards, and it’s so very easy to churn out a quick two-hour game based on the latest cartoon or movie without any remorse whatsoever. With Madballs in Babo Invasion, I expected something equally cheap, rushed and bereft of entertainment.

It’s quite surprising, then, that Madballs is actually not that bad. It’s certainly not brilliant, and nothing you could really keep playing forever. As far as shooters go, it’s nothing that will ever replace the stuff already found on XBLA, but for a licensed game, Madballs in Babo Invasion isn’t too bad at all.

Read on for the review. 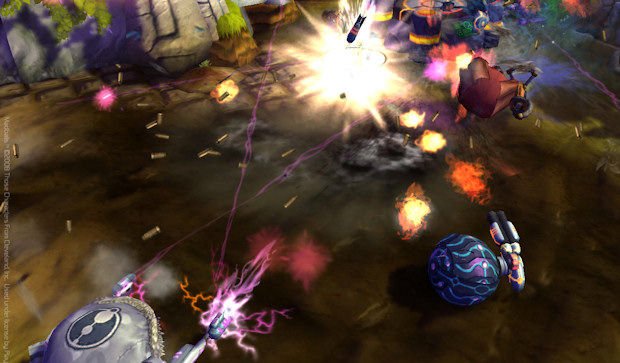 For some reason, there’s a plot attached to Babo Invasion, although its convoluted and forgettable as anything. It doesn’t help that its presented mostly by still images and silent text, with rather quiet and forgettable music playing. For what it’s worth, an eye and a cyclops ball (recognizable from the original Madballs line) crash land on a planet and join forces with two opposing factions. Players can choose either one of the two factions, each with its own set of characters.

Considering the fact that characters are balls, one could have reasonably expected something like Marble Madness, where the fact that players take on the role of spheres would have some impact on the gameplay. Instead, the shape of the characters is merely incidental, as Babo Invasion instead takes the form of a traditional top-down shooter. Quite how the balls are holding their guns is unclear, but they are.

There is a range of weaponry to be found in the game, unlocked by causing damage throughout the campaign. These range from the standard rifle and shotgun weapons, to more extravagant firearms such as guns that fire ricocheting sawblades and beam cannons. I found most of the weapons to be inconvenient, preferring to stick to the standard rifle. That said, using the guns enough times unlocks a secondary fire mode for each one, some of which can be quite useful for countering different enemy types. 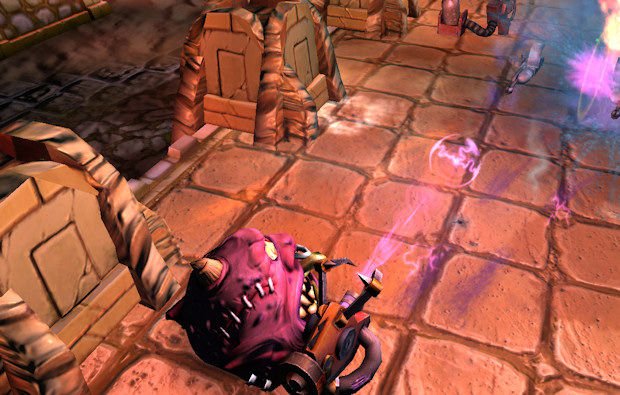 Each character (unlocked in the same way as the weaponry) performs slightly differently, with a unique size, and maneuverability, as well as an individual special power. With a press of the left trigger, your chosen Madball can perform a specific ability. For example, Oculus can dash at a super speed, while Jenson is able to throw down a healing pod. When the abilities are used enough times, a charge power is unlocked, which is used by holding down the trigger for longer. It’s simple, but it does the trick.

At its core, Babo Invasion is a very standard shooter. It doesn’t really do anything unique to the genre and simply toes the line without treading on new ground. Not a bad game, but certainly not all that interesting. The interest is hampered by the fact that it also tries to be a hardcore arcade-style shooter. Constantly throwing enemies at you and giving you a limited number of lives is great if the game itself is interesting enough to make you want to keep playing, but in a game like Madballs, it just discourages you from playing.

The gameplay isn’t thrilling enough, nor is the story engaging enough, to make you want to replay a level if you get Game Over. Most players used to better top-down shooters on XBLA like Wolf of the Battlefield or even Assault Heroes will find themselves a bit too bored to slog through the campaign, as I certainly did. The game does get points for a rather clever Final Fantasy VII reference though, which I won’t ruin. 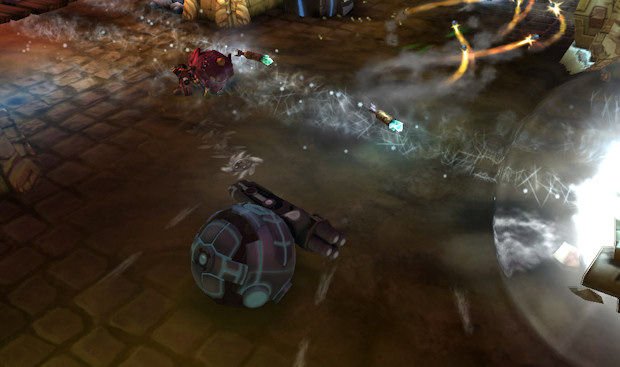 As well as the single-player mode, there is online multiplayer. The main feature here is the fact that you can convert your NXE Avatar into a Madball, allowing Microsoft’s gormless fashion models to shoot each other to pieces. It’s cute, and will amuse for the first few seconds, but otherwise it’s a gimmicky addition to a very standard shooter that won’t probably won’t keep the average shooter fan entertained for very long.

Madballs in Babo Invasion is a relatively decent shooter that is better than it has the right to be, but certainly won’t be considered a classic of the XBLA platform. If you absolutely love shooters and want to play every last one, then this will be worth a purchase. The rest of you might want to give it a trial before risking the investment.