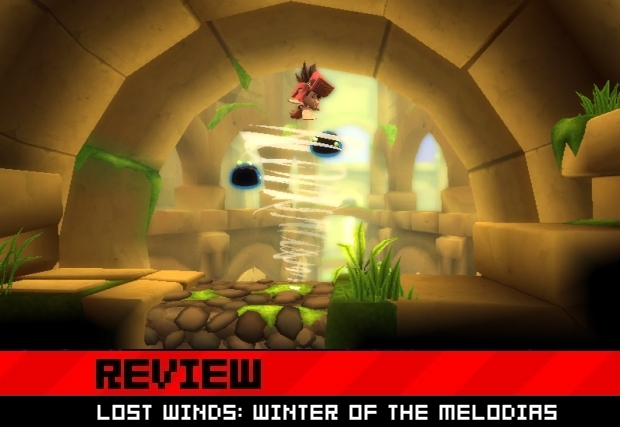 When I heard the news that a second Lost Winds game was coming out I knew I had to finally download the first game and become a big fan of it. So I did download it and I did become a big fan of it. It had its flaws though. Most of these had to do with the fact that you just wanted more thanks to the short length of the game. Luckily for me there was more in the form of the sequel, Lost Winds: The Winter of the Melodias.

Promptly after finishing the first game I “popped in” the second, which instantly negated the whole length issue of the first game. Having already negated the worst thing about another game I wondered if Winter of the Melodias would continue on its streak of greatness or the winds would blow in another direction. Read on for the full review and the hopeful continuation of my wind metaphor.

Let’s start by confirming that while Winter of the Melodias does a great job of extending the length of the first game, it does a poor job of being a long game in itself. The game would probably take about four hours to get through if you just sat down and played, which for 1000 Wii Points ($10) isn’t so bad at all. Still, when those four are some of the best platform/puzzle gaming you’ve seen in a long, long time the real issue with the game’s short running time is not that it’s too short because of some made up time you think a game should be, but that it’s too short because you desperately want to play more and continue the story of young Toku and the Wind Spirit Enril.

Winter of the Melodias picks up almost exactly where the first game left off, and if you thought that Lost Winds was simply going to be a one-off simplistic storyline you were about 1,000 miles from right (which is where wrong is located). Winter of the Melodias‘ story not only expands on the game’s universe and storyline, it also strongly hints at developer Frontier’s desire to make more sequels (yes, please) and has a surprisingly emotional plot for a downloadable, four hour game.

In Winter of the Melodias Toku’s mother, a great explorer, has gone missing and is eventually found to be poisoned. Toku and Enril must then depart on a journey to rescue her and figure out a cure for her condition. This takes them high into the mountains where an everlasting winter has occurred and an ancient city known as Melodia lies in wait. The story is once again told through brief “cutscenes” with text boxes above character’s heads, but unlike other games where this can harm the story it actually fits in well with the game’s overall feel and sidescrolling nature. It also doesn’t detract from the few mother/son moments as Frontier does an amazing job of showing emotion through animation and character design. An interesting story and world are often some of the things that are missing from downloadable games and Frontier delivers here in spades.

Of course it helps that the game looks absolutely amazing. I don’t know if it is the graphical style or just the fact that I’m so used to poor graphics on my Wii, but I was literally stunned when I turned the game on. Characters, worlds and even simple actions are all bright, lively and, even more importantly, unique. The graphics are crisp and every aspect of the game shines with originality, despite the fact that there had already been a game in the series. It also helps that Frontier didn’t simply make the foreground look great, but focused on the background of the game as well. Rarely does a sidescrolling game’s world seem truly alive thanks to it having lifeless static backgrounds, but Winter of the Melodias is vibrant on all levels of depth, with activities constantly going on in the foreground and background. It may seem like a small thing, but it makes the game feel like so much more. A particularly fantastic example of this is in the first level as a giant stone creature swings along mountain tops in the background and every so often leans into the foreground and helps Toku get past obstacles. Just some absolutely brilliant game design.

Which is what Winter of the Melodias’ gameplay is as well. Of course the wind controls from the first game, which still have a bit of a learning curve to them, return, with the player making Toku jump with Enril’s wind power by using the Wii Remote’s pointer ability to cast gusts of wind, but there’s more this time around. The game features a new wind power, which is a cyclone that allows Toku to raise himself up higher or dig a whole into certain types of ground or, even more creatively, move water from one point to another by sucking it up and creating a rain cloud (this leads to some awesome puzzles). That’s the small new power though, the new one is a season changing mechanic. Toku can control the seasons (summer or winter) and thus what is going on in the level. It’s kind of like the old dual world mechanic that has shown up in plenty of games, where you can do some things in one world or dimension, but not in the other. Actually, it’s exactly like that.

However, while the game mechanic might not be the most original, combining it with the completely original control scheme and the ingenious world puzzles Frontier has come up with makes for some of the best platform/puzzle gaming out there. It gets even better when they throw in a “key” in the form of an ancient robot that Toku must guide around. A very basic example of this would be having to freeze a pond over by making it winter so that the “key” could cross it since it can’t swim. None of these are entirely original concepts (except the controls), but by mixing all the mechanics together the game presents some immensely creative challenges. It’s like a sandwich; sure bread, meat and cheese are good apart, but the putting them together makes them even better.

I totally abandoned that wind metaphor…