Being Destructoid’s unofficial “Wii guy” has its perks and its pitfalls. It’s nice to get first dibs on reviewing awesome games like Little King’s Story and Bit.Trip Core, but when a Wii peripheral or C-list game hits the Destructoid office mailbox, it’s only a matter of time before it shows up on my desk with a “Tag, you’re it!” note attached.

I couldn’t have been less excited about the idea of playing Little League World Series Baseball 2009 to completion. I think the last team sports game I really loved was Ice Hockey on the NES. That’s okay, though, because I’m a PROFESSIONAL GAMING JOURNALIST, which means I sometimes play videogames that I don’t want to play, and then tell you if you should buy them or not.

Want to read the most professional, unbiased review of a game featuring Gary Thorne and Brent Musberger ever written by anyone ever? Then hit the jump and read my thunderous words of wonder. 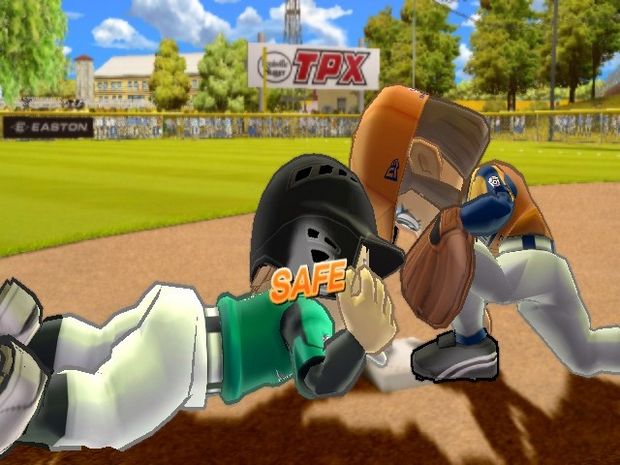 Little League World Series Baseball 2009 is a sometimes messy conglomeration of gameplay ideas, but overall it all comes together. The game contains equal portions of the stuff I hate about real-life professional sports, and the stuff that can help to make sports games tolerable for a dyed-in-the-wool anti-sports fan like me. On one end, it shoots for realism with detailed stat tracking, professional commentators, and by-the-book baseball gameplay; on the other, the game’s characters look like pissed-off Precious Moments figurines and occasionally generate blasts of electricity like some sort of land-walking, serious-about-baseball electric eel creatures. The game’s developers really put effort into making their game at least partially appealing to everybody, but by and large, this is a title that only baseball fans will fully enjoy, and only Little League fans could consider an all-time favorite.

Probably the best thing about the game is its multiple control options. You can play with either the Wii Remote alone, the Wii Remote and Nunchuk, or the Classic Controller. I guess multimillion-selliing games like Super Smash Bros. Brawl and Mario Kart Wii, both of which allow for traditional or motion controls, have started to convince developers that just because it’s a Wii game doesn’t mean that it has to be all waggle, all the time. 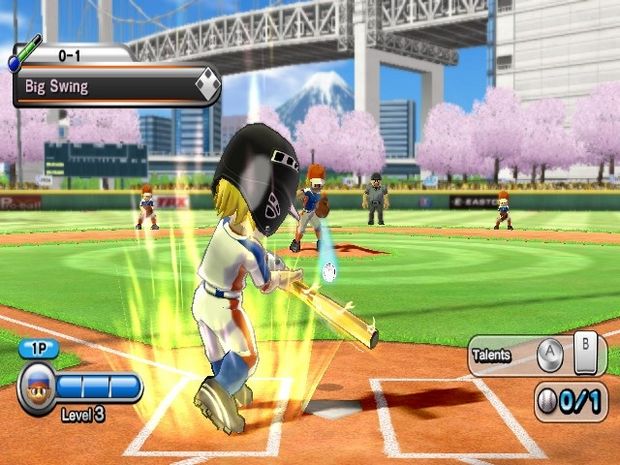 That said, the motion controls here are a little silly. They’re responsive enough, I guess, but they feel a little unnecessary. When you pitch, you can either play “the right way” and do a proper windup, or you can play the “guy who hates sports” way, and just give the Wii Remote a little wanking motion. Either one will cause “power meter” rolling on the right side of the screen, just like the ones found in most golf videogames. From there, you can thrust your arm any which way to get a good pitch, just as long as you do it fast and when the meter is close to full. The instruction manual says that twisting the Wii Remote as you throw can alter the direction of your pitch, but I never really got that to work. Instead, I stuck with using the control pad, A button, and B button to alter my pitches, with generally high levels of success.

Batting also lacks one-to-one controls. Maybe the game really does respond to “the angle and how fast [I] swing” like the instructions say, but it never really felt that way. Swinging the Wii Remote definitely gets the little man on the screen to swing his baseball bat, and I never had a problem with delay or lag, but our swings never even remotely matched up. Do I care? Not really; feeling like it’s “really me in the Little League game” wouldn’t really affect me either way, but I could see how some may be disappointed. 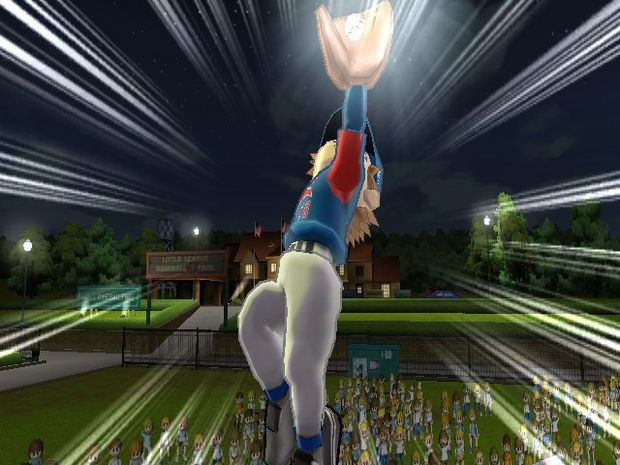 Also potentially disappointing are the game’s power-ups, called “talents.” As you make successful plays, your characters build up a three-level “talent” meter. Hold A and press B once the meter is at least one-third full, and that player will activate their “talent.” For that play, they will add some supernatural element to their next move. Electric hits and fireball pitches are most common, but there are a few other surprises in store for those who put more time into the game. Thing is, I never really felt like these “talents” did anything. You can still totally screw up even after activating them, and even if you don’t, their effects seem minimally productive. That said, the inclusion of “talents” does help to break up the game a bit, and add some flair to what is an otherwise very normal game of baseball.

Fans of customization will find a lot to like in Little League World Series Baseball 2009. Starting off, you can choose the country and region of origin of your team, as well as their name and uniform style. From there, you can alter the appearance of every player — choose their gloves, bats, and even their individual throwing animations. Playing through the game will also award you with in-game baseball cards with player growth points that can be used to “level up” your team. These kinds of “RPG elements” are commonplace among most of today’s big-name sports games, but they still deserve a mention, as many of the Wii’s best-selling “family” sports games don’t have nearly this much depth. 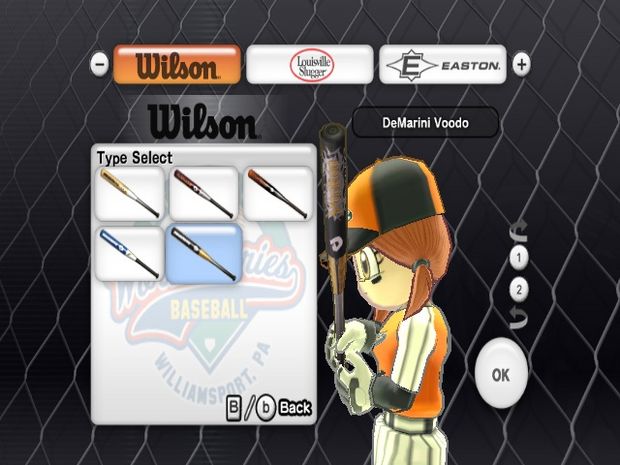 To round things out, there are the expected mini-games, here called “Skill Challenges.” There are six in all, ranging from the mundane (Home Run Derby) to the pandering (Pitch Bowling: “Bowling with a baseball!”) to the almost interesting (Dunk Dugout: “dunk Dugout, the mascot, into the tank of water!”). Sadly, any of the games that involve actual precision pitching (like Dunk Dugout) are totally frustrating, as pitching in this game is nowhere near as responsive as similar games on the Wii (like Let’s Catch).

For every little complaint that I have about Little League World Series Baseball 2009, there is is a little detail that showed me that this game was cared about. The commentary by real-life sportscasters Gary Thome and Brent Musberger is amusing and believable. Hearing these guys spout about how much fun it is to watch little kids “take the skills they learned from Dad and apply them to the mound” had me smiling, both because of their sincerity and because of how unintentionally dirty they sometime sound. The game’s devs even went as far as to occasionally flash an animated cartoon image of the old men yapping from the commentators’ box. It’s a surreal detail that shows that what this game lacks in budget, it tries to make up for with heart. 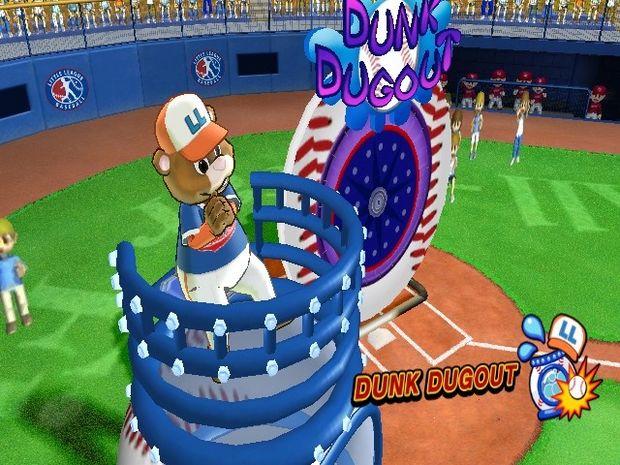 Also packed with heart are the biographical factoids that pop up on screen as each player steps up to bat. These include what the players’ favorite foods, hobbies, and films are. These little personal details actually went a long way towards my investment in the game. When the kid whose favorite movie is Robots came up to bat, I really wanted to strike that little bastard out, but when the kid I was pitching against loved Castle in the Sky, I actually wanted to let him win.

Ah, who am I kidding? Most people with any interest in this game will likely be playing it in either cooperative or versus multiplayer (up to four players total), and could likely give a rat’s ass about the commentary or the in-game bios of CPU-controlled characters. Thankfully, the multiplayer here works great, and if you like team sports enough to read this review to begin with, this is likely the way you’ll plan to go. As for me, I hate team sports — especially baseball — so I had to latch onto those little details to make the game more interesting for me.

That said, I still had a fair amount of fun with this game, and if I were someone who actually enjoyed the sport it was based on, I may have even loved it. For baseball fans who find the MLB 2K series to be a bit too realistic, but think that Mario Superstar Baseball isn’t quite realistic enough, Little League World Series Baseball 2009 offers a good middle ground. Considering the game is only $40, I give it a…