Little King’s Story is a new game from the creative minds behind Super Mario RPG, Final Fantasy VII, and Harvest Moon. A superstar collaboration of this nature would be the stuff of non-stop discussion if we were talking about a new movie or CD, but with videogames, creative teams don’t seem to matter as much famous mascots and recognizable namesakes. If only Little King’s Story were called Gears of Warcraft: Wii Edition, maybe it would be getting more attention.

OK, enough bellyaching. Hit the jump if you want to know how much I love Little King’s Story. I’ll tell you right now, it’s not just a “little” bit. 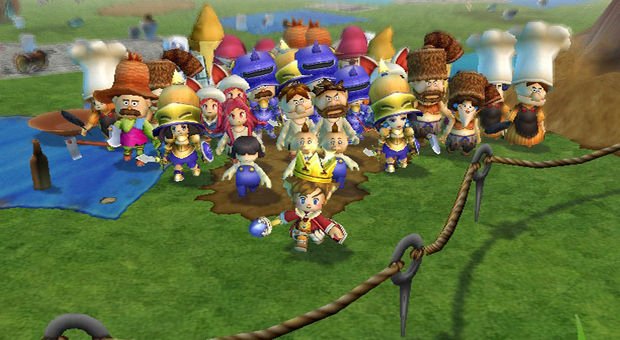 It was love at first sight for me and Little King’s Story. From the moment that the game started, with its brilliant, hand painted-looking opening cinema, to the last second of its bizarre twist ending, I was totally smitten. The game constantly sparks with creativity. There are a few technical failings that keep the game from being perfect, but they are easy to overlook when everything else is so outstanding.

Little King’s Story is a game about a boy who, through a bizarre rat accident, becomes the owner of a crown that makes people follow his every command. With this new found power of persuasion and the encouragement of his loyal cabinet, the boy enters into the unique relationship between a king and his subjects.

The general flow of the game consists of going out into the world; exploring, gathering, battling, and building, and then returning to your kingdom to count your money and decide how to spend it. Money is used to build homes for new villagers to move into, new “academies” for your citizens to attend and learn new trades, and extra stuff — like a factory to build better weapons, a “crunchy bean diet law” that requires your citizens to eat better (which increases their HP), and a cannon that can launch you to various areas in your ever-expanding kingdom. You can also choose to take on optional quests that unlock new enemies and potentially new items. 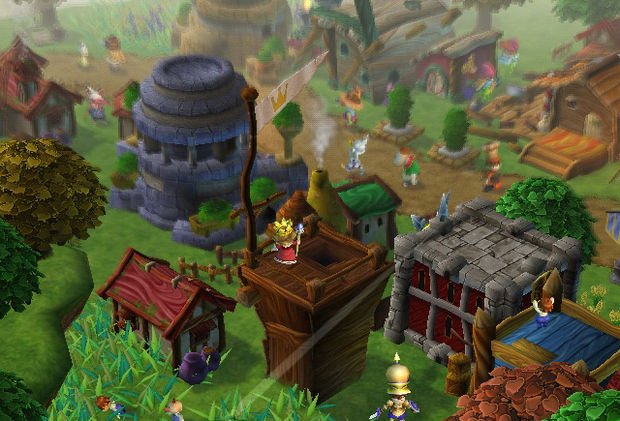 Little King’s Story is filled with satire and social commentary. It all appears relatively inoffensive on the surface, but it doesn’t take long for the deeper concepts of the game to take shape. Class and the meaning of nobility are the most recurring topics, but the purpose of science, art, religion, television, and Armageddon all play a part. Little King’s Story’s take on religion is one of my favorite bits of humor in the game. About an hour in, an insane-looking man approaches you while hitting his head with two “holy scepters.” He is “Kambell, of the Sect of Soup,” a monk who demands that you build him a church or suffer God’s wrath. While all your other subjects are consistently grateful to you for your leadership and skills in battle, Kambell makes it a point to tell you that he does not thank you for anything you’ve done for the kingdom, and instead thanks God for everything. He also ends every sentence with “ramen” instead of “amen.” It’s almost as good as the Church of the Flying Spaghetti Monster.

World domination and the pursuit of power are also a huge part of the Little King’s Story experience. The little king himself is a perpetual innocent. He has no motivations other than those the player instills in him. The same can’t be said for his cabinet, and in particular, the Don Quixote inspired, cow-riding knight Howser, who is constantly encouraging the king to take over the world. As suspicious as I was of Howser and his seemingly self serving interests in global conquest, I couldn’t help but buy into his praise that I deserved to take over everything, and quickly gave into the urge to conquer seven other kingdoms, each containing its own culture, natural resources, and wives. 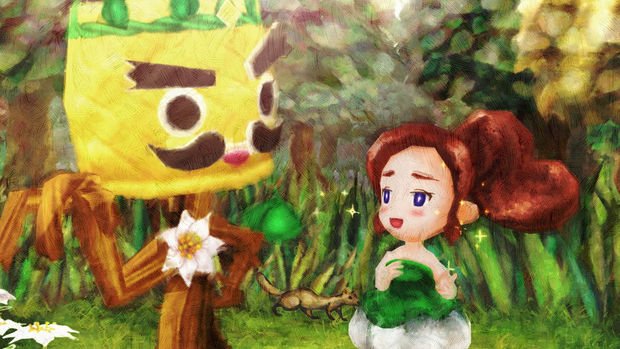 These kingdoms all have their own specific traits and quirks. One kingdom is ruled by a man who thinks that eating and getting drunk is the key to nobility, while another thinks that thinking (not acting) is the definition of high class. Yet another king believes that TV should be the center of all human experience. There is a matching amount of variety in monsters found in the game’s various kingdoms. Aliens, giant mushrooms, angry watermelons, and giant chickens all make an appearance, and all have the ability to kill you dead if you aren’t careful. The game’s enemy and scenario design truly embrace the fact that Little King’s Story is a videogame; one of the last forms of mainstream art where delightful surrealism is totally accepted.

Things get a little less delightful when it comes to how the game plays. Like in the Pikmin and Overlord series, Little King’s Story allows you to lead a small army of “followers” into battle. You only have two basic commands; charge into the field, or retreat into line behind you. The small amount of commands available isn’t a problem, but the controls are. In one of the most baffling game design decisions ever devised, the game features absolutely no IR pointing whatsoever. To direct your followers, you need to aim with the analog stick, and it generally feels clunky and imprecise. With practice though, you won’t likely even notice the game’s sticky aiming, but for the first hour it’s a bit of a downer. 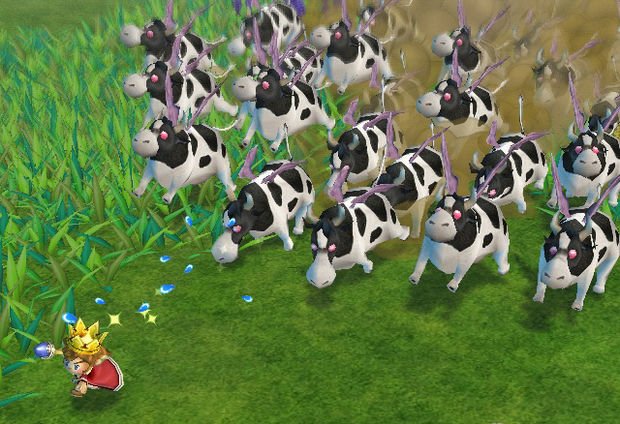 The game also starts a bit slowly. For the first two hours or so, things are fairly linear and limited. You’ll only have a few places to explore and three or four of the game’s twenty job classes to work with — things are generally too simple and easy. There is also a particularly bland mid-boss fight against a giant frog that just screams “Pikmin wannabe.” It’s sad that the game is at its least appealing in its first act, as that might turn a lot of people off. To be clear, nothing in the first two hours is bad, but it’s just not as amazing as what follows.

After defeating your first king, things open up in a big way. That’s when you are allowed to explore in multiple directions, take on a wide variety of enemies, suffer some genuine defeat, and get the gourmet chef character class that can uppercut giant chickens and perform obnoxiously powerful air combos on them, transforming them into giant eggs. It really seems like the game’s designers felt the world of Little King’s Story should have no boundaries. I don’t want to give it all away, but I will tell you that the game kept me guessing until the very end. 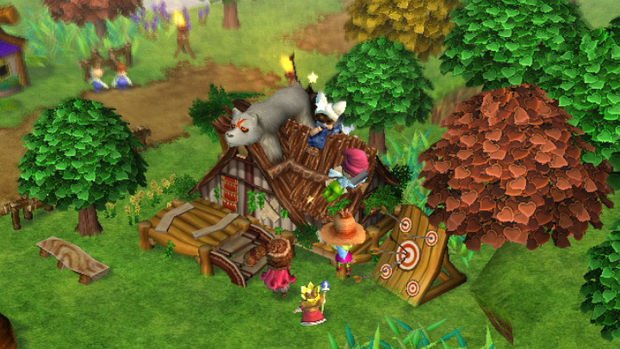 Little King’s Story will take most people between 35 and 50 hours to beat, depending on what difficulty they choose, how often they die, and how much time they spend exploring, gold farming, and goofing off. The game contains so many tiny details that I would never claim to have seen them all after just a week’s worth of play. I can tell you that there are over 100 pieces of artwork to find and display, most of which were created by fans prior to the game’s release; 20 extra songs to unlock; tons of different animals to chart and study National Geographic-style, and a variety of optional weapons and armor to find and equip your ever-increasing population with. You can also talk to any of your villagers at any time, each having their own attitude and personality. If you pay close enough attention to them, you can even “help” them get married (meaning, you can force them to go to church and have a baby, right there on the spot). All these little details come together to make the Little King’s Story world feel like a real place, one of endless charm and limitless things to do, almost all of which are fun.

Special mention should also be made for the game’s soundtrack. It’s all public domain classical music, re-arranged to perfection. The air of class and legitimacy that the game’s soundtrack lends to Little King’s Story can’t be underestimated. These arrangements clearly took a lot of thought and creativity to devise, so don’t think that just because they are public domain that they are any less awesome. 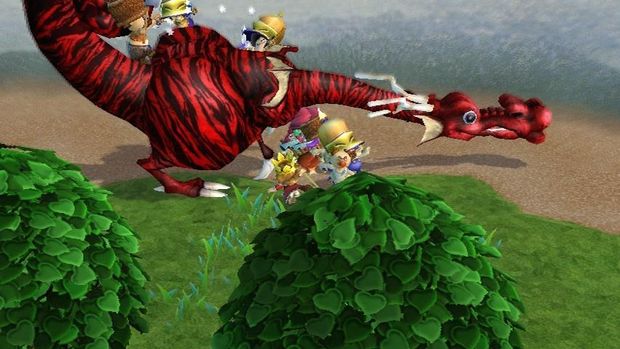 The main thing I want you to know about Little King’s Story is how incredibly charming it is. It’s hard to imagine that anyone willing to put an hour or so into the game won’t come away smiling. Beyond its quirky, likable surface, Little King’s Story offers the opportunity for the genuine joy, fear, pride, shame, curiosity and wonder that a real child might feel when given the task of ruling a kingdom of adults. Clever design choices and bravely placed satire round out what will likely become yet another under-appreciated Wii-exclusive cult classic.

Man, I really wish the game could have been called Gears of Warcraft: Wii Edition. I’d bet dollars to donuts that with that name, it could have sold a trillion copies.

Score: 8.5 – Great (8s are impressive efforts with a few noticeable problems holding them back. Won’t astound everyone, but is worth your time and cash.)