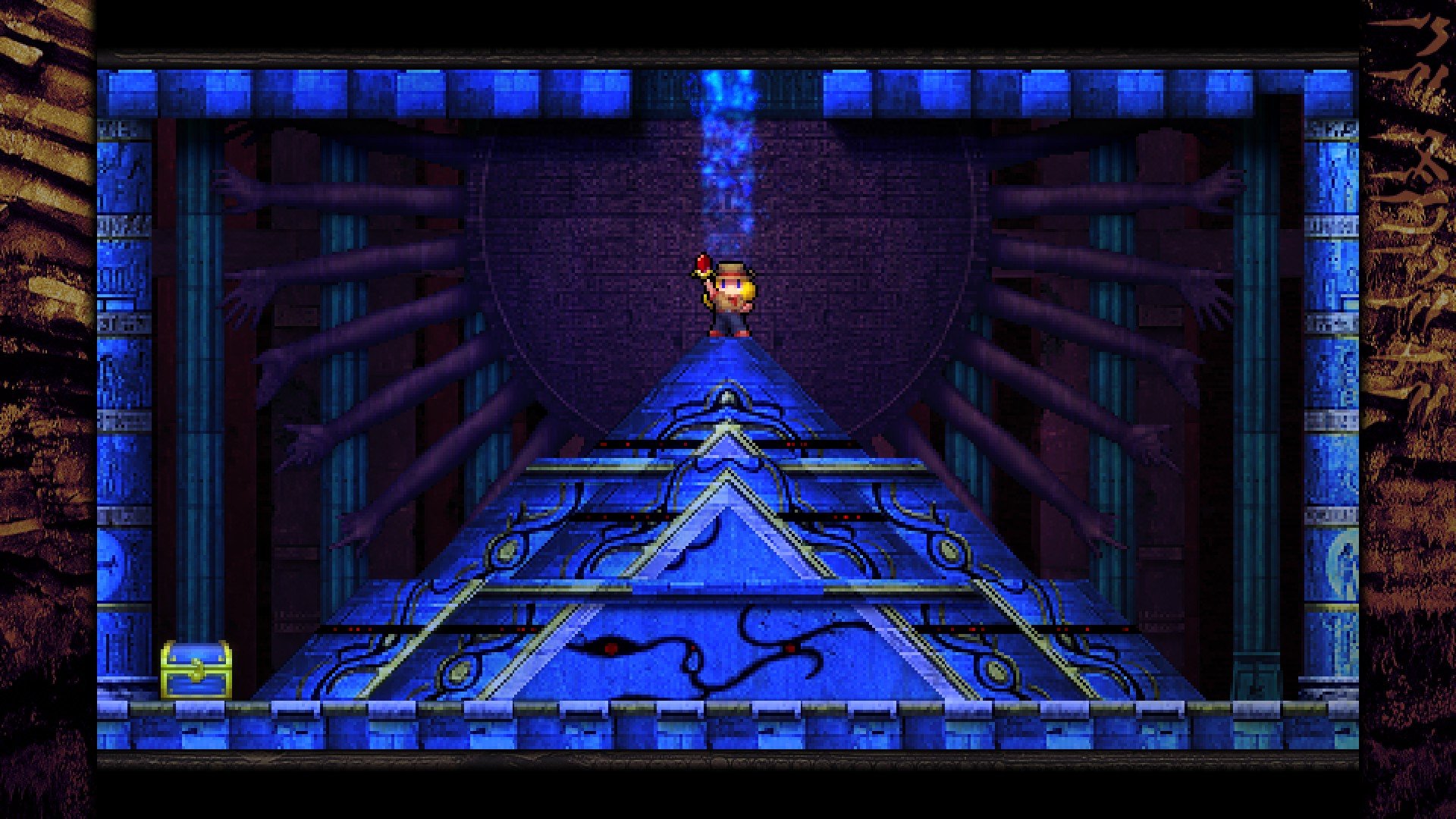 While watching one of the Indiana Jones films, have you ever stopped to think how unlikely it is that Indy succeeds all the time? What are the chances he knows exactly which items to use in remote locations around the world at the exact right time? How can he stroll into ancient ruins, step on pressure plates, and narrowly avoid death all the time? Since it looks so easy in film, many of us have thought we could do the same thing. Those daring feats of cunning wit and narrow escapes look so enticing that it shouldn’t be so difficult, right?

If you’ve ever believed you could be Indiana Jones, playing the cult-classic La-Mulana would quickly put you in your place. This is a game not afraid to erase hours of progress for failing to pay attention and one with clues so cryptic a blind playthrough could take upwards of 100 hours. While it was never a massive commercial success, La-Mulana gained a big enough following to Kickstart a sequel and show us that, yeah, being Indiana Jones ain’t that easy.

I just wish the whole thing was polished better because my struggles with reaching the conclusion aren’t purely down to my lacking spatial awareness.

I’ll be upfront about this and tell you all that I haven’t finished La-Mulana 2. I’ve put around 30 hours into the game and have made steady progress, but not without a complete restart to get myself back on track. One of the joys of La-Mulana is how little it cares about your mental well-being, so you can accidentally activate a hard mode that is irreversible. Despite knowing this sly trick, I somehow did it in the sequel and needed to begin anew after putting 17 hours into a playthrough.

That being said, it gave me a great understanding of how diverse playthroughs of La-Mulana 2 can be. Using the help of some guides for my second run, I was able to fast track my way to the guardians (the main bosses) with little effort and recover my entire inventory in around two hours. From there, I’ve been looking to the unofficial La-Mulana 2 subreddit and checking out videos about how to acquire items and am surprised at how differently I went about things my first run through. You can take some wildly different routes and acquire items much earlier than you need to, which is likely to make the speedrunning community very happy.

On the flip side, this open-ended approach often means you’ll stumble into dead ends and be left with little clue of how to progress. Even with semi-nonlinearity, there are certain items and bosses you need to vanquish to reach late game areas and it can be a real struggle to even decipher what the game wants of you. I feel dumb about some of the puzzle solutions, but others are so stupidly complicated that it feels like the game is built for people with hyper-intelligence.

This would all be fine if the combat didn’t also mercilessly stomp you when you’re down. After explaining to my friend how brutal La-Mulana 2 is, I proceeded to find a new area and locate a save point. Since you can fast travel to save points, I was very eager to read the grail and activate my new warp point, but the floor collapsed right in front of me as I was walking and dropped me into a bed of spikes.

This uncompromising difficulty also applies to enemy encounters. Your invincibility frames after taking damage are so minuscule that you’ll often get juggled between foes and land on top of spikes that can wipe your health out in seconds. Nothing eases up on you in La-Mulana 2 and that is likely to put a majority of gamers off from the get-go.

A lot of this isn’t new for the series, though. People who have dipped their toes in the original game know how ridiculously difficult it can be. I’ve seen the phrase “Dark Souls before Dark Souls” online, but that isn’t entirely accurate. At least Dark Souls cares about your sanity; La-Mulana just kicks the shit out of you and forces you to play by its rules. There are no hacks, tricks or easy shortcuts in its world.

Well, that should be true, but the main problem that troubles me with La-Mulana 2 is how buggy it can be. I’m not sure if this was an issue with the remake of the original (I played it in 2015 after it had been out for three years), but I’ve seen a variety of stages in La-Mulana 2 and they all have some problem with them. The pre-release version was missing some content and had incorrect translations (leading to an endgame puzzle that was literally impossible to solve). You could also glitch your way to items way earlier than intended, which ended up breaking the game in ways developer Nigoro probably didn’t want. Even with those bugs squashed, this current version has graphical glitches and some oddly stiff controls at times.

To make matters worse, the launch version was actually easier than the build currently available online. I can’t speak from experience, but there is a pretty vocal group of fans that were displeased with the final boss in the launch version because of how simple it was. Now, the boss is a nightmare of precise timing and acute pattern recognition. I’ve noticed general enemy encounters are just tougher and even bosses I previously conquered put up a challenge on my second attempt. I commend developer Nigoro for listening to fans, but I can’t deny I have a feeling that La-Mulana 2 was a bit rushed.

The general presentation in La-Mulana 2 is better than the first, but there are odd sprite scaling problems that result in ugly tearing while moving across wider rooms. Sometimes I’ll press the jump button before reaching an edge, but my character won’t respond in time and walk straight off. Other times, still, I’ll get stuck in damage loops that then result in me getting kicked to the previous screen and wasting time. Even some room specific triggers won’t set off, requiring you reload your save to make progress. It can be a ridiculously frustrating experience.

At the same time, I’ll be exploring some areas and listening to the music and just enter a zen state. The soundtrack is beyond excellent and somehow manages to surpass the original. It often makes me think La-Mulana 2 is the best game ever created. I love how diverse the environments are and how stage gimmicks start to become a bigger focus in the latter half. The various upgrades available to you feel like tangible improvements and do more than Metroid’s various ammo upgrades ever could. It is a masterclass in how to properly upgrade your character while keeping older items relevant.

It’s just the difficulty balancing doesn’t feel correct. Clearly, the first boss will be hard because of how unfamiliar you are with the game, but I shouldn’t be steamrolling the fifth one after the fourth gave me nightmares. I shouldn’t enter an area called “Dark Lord’s Mausoleum” and never feel threatened. Everything is fun to explore, but there isn’t a clear sense of progression in how these areas are laid out or which path you should be going in.

For that matter, a lot of the solutions to puzzles require an obscene amount of backtracking to deal with. You’ll find a clue in one area that triggers the puzzle in another while requiring you to obtain an item from a third area and it feels like brain surgery. This game is so obtuse, at times, that I just want to scream. It doesn’t help that you can die immediately if you make a wrong move, which then requires you to repeat the process however many times.

Still, I haven’t given up on La-Mulana 2. It may drive me nuts and lead me to an early grave, but I’m compelled to keep playing. I want to see that conclusion and may even just speedrun the title after beating it to empower myself. I could even give hard mode a proper shot, though I don’t know if I’m ready to give up seeing my friends and family for a whole month. The game has its hooks in me and I’m eager to discover its secrets, but it certainly is not easy.

I just don’t feel comfortable giving it a score under these circumstances. For the people who do gel with the decidedly old-school flavor that La-Mulana is, 2 is going to be an absolute joy for them. For the ones that want a little more guidance or hate “wasting” time due to unforeseen insta-deaths, La-Mulana 2 is going to be an absolute nightmare. Does that mean I give the game a one and a 10 at the same time?

Maybe my own opinion will change after the credits roll, but I honestly don’t think so. Rating La-Mulana 2 anything doesn’t do the game justice. There are issues with it and some odds and ends could be tightened up, but even if it pales in comparison to the first (which I don’t personally believe), fans will likely still be talking about this game for years to come. This is an experience that doesn’t come around often in any medium.

So if you believe you’re ready to take the plunge on a journey that just might end you, La-Mulana 2 is highly recommended. Just be sure to look out for false tablets…and don’t stand still too often…oh, definitely listen when the game tells you to stop reading.

[This review is based on a retail build of the game provided by the publisher. No score was given as the game was not completed.]