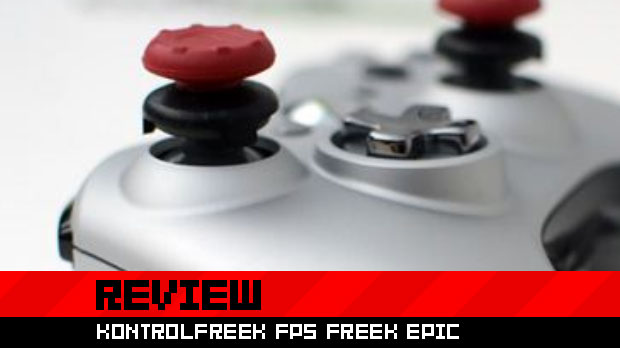 With Gears of War 3 launching tonight, all those fratboys obsessed with hulking masses of gun-toting meat will want to splurge excessive amounts of money on trinkets and paraphernalia.

Fortunately, KontrolFreek has ’em covered with the FPS Freek EPIC, a new set of thumbsticks that click onto the Xbox 360’s controller and claim to help you play better. KontrolFreek has teamed up with Microsoft to start providing its products at retail for the first time, and we got our hands on the new Gears-flavored enhancements to test them for ourselves.

The FPS Freek EPIC has been designed specifically to work with Gears of War, and is definitely for hardcore fans of the series. Even the aesthetics have Epic’s manly franchise in mind, designed as they are with the famous Gears “Skull” icon etched into the center. As with the original logo, each skull is surrounded by a cog, and the cog’s teeth are raised to create extra grip, which I feel is quite a nice touch.

Using thick rubber with a lot of friction to it, there’s an impressive amount of tactility on the nubs, so your sweaty palms shouldn’t slide off the rigid sticks no matter how hard you jostle. The Freek enhancements snap onto the existing sticks quite easily and hold firm once fixed, but can be removed easily if you tug with enough vigor. The hole at the base of the Freek is tight, but flexible enough to be penetrated by both Xbox 360 and PS3 sticks, meaning your peripheral can safely have several partners.

The extra height gained by the Freek takes some getting used to, and may feel quite odd to those who have never experimented before, but after just a minute or two it starts to feel surprisingly natural. I’ve tried it with Gears of War 3, and found that it didn’t harm my gaming ability at all. I was still able to get my token two kills before getting shotgunned in the face by some rolling arsehole, so it’s definitely business as usual with the FPS Freek.

That, however, presents the biggest problem with the add-on. It felt so much like business as usual that I can’t really say it enhanced my gaming prowess. Sure, I have something thicker and longer in my hands, but I can’t say the pleasure was heightened. The added length claims to allow players to make smaller motions when targeting and moving, but personally I didn’t quite feel a dramatic enough change in the way I played my game. The extra grip was welcome, and using the sticks felt shockingly comfortable, but comfort and usability are the only things that stuck out to me. My ability to track and hit targets felt the same as it always has.

It should also be noted that, while the FPS Freek EPIC does feel good with Gears of War, I had to take the sticks off when playing other games. I tried the peripheral with Warhammer 40,000: Space Marine, for example, and they felt less comfortable, not least for the fact that one clicks the left stick to sprint in that game, and the FPS Freek isn’t quite as adept at letting me do that.

The FPS Freek EPIC is a cool little extra, and the comfort alone makes one far more able to cope with an evening of Gears of War 3 multiplayer. Those looking to gain an upper hand on the competition, however, won’t quite find their abilities augmented to any extreme degree with this. The principal of extra height is definitely in play, but I just don’t think it’s dramatic enough to make a player significantly more threatening.

Due to its visual design and limited applications, the FPS Freek EPIC is definitely a peripheral for the truly dedicated Gearheads out there. Those people will find plenty of use for it, but the more casual player can safely stick with a virgin controller.