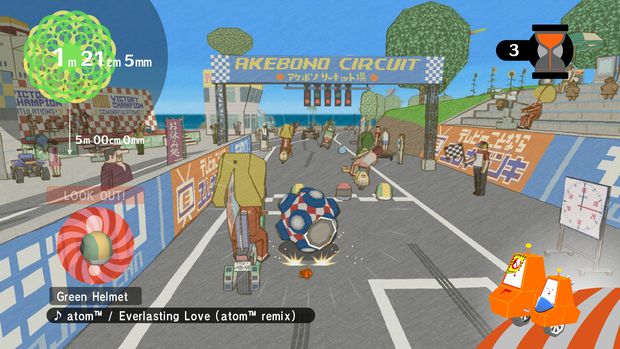 This is a strange review to write in a way. Not because it’s a Katamari Damacy game — though that’s plenty strange in its own right — but due to the fact that Katamari Forever is essentially a compilation of levels from previous games in the series. It’s like a “Greatest Hits” album by a musical act, a collection of songs that people who love the band will already have that adds on a couple of bonus tracks just so there’s some new content.

This is not a bad thing, necessarily. If you are of the opinion that the series has gone about as far as it can go creatively, this game may only reinforce that perspective. Alternately, if you missed out on a game or two in the series or have yet to play it altogether, Katamari Forever offers a decent slice from all the games to date.

The problem with any compilation of this nature is that nobody is going to get everything they want. There will be levels from older games that you’ll really wish had been included in this one. And there will be others that you really wish had been left in the bin in the first place that are now here for you to grumble your way through again (goddamn cowbear). On the whole, I like the selection of levels. It’s a good mix that’s representative of the whole series and doesn’t strongly emphasize one style of play from another, though it might have benefited from a couple more stages from the original Katamari Damacy. Your mileage may vary based on your preferences in Katamari. 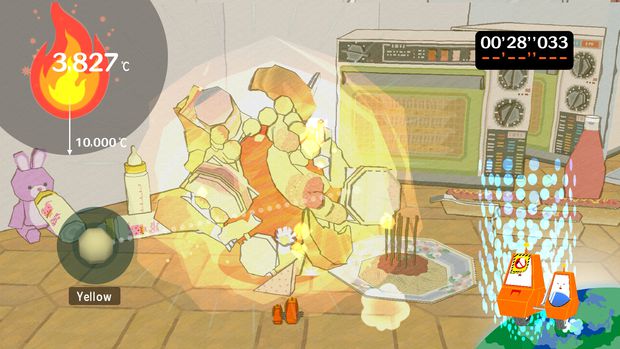 While the content is primarily old, the story is new. The King of All Cosmos has hit his head in an attempt to teach the Prince how to jump and now lies in a coma, his memories lost. To keep the Cosmos going, Prince and the cousins have built RoboKing, a robotic version of the royal patriarch who has all of the King’s powers but none of his self-confidence. Upon activating the robot, however, RoboKing flies into the sky and destroys all the stars.

The game is divided into two sets of levels. Half of the game revolves around putting the stars back in the sky, while the other half consists of rolling around the King’s memories of Katamari past and recreating other celestial bodies he had created. The game is spent going back and forth between the King and RoboKing, serving their needs.

The charm of the Katamari games is as strong as it has been in the past. RoboKing does a lot for keeping the game feeling fresh. He’s insecure, nervous and very funny in a way that contrasts completely from the bragging, over-confident King. He adds an oddly sympathetic tone to things, as he fears he’ll never be adequate in the same way the King would point out how inadequate the Prince was in prior games. It’s different and I like how it’s mixing things up a bit. 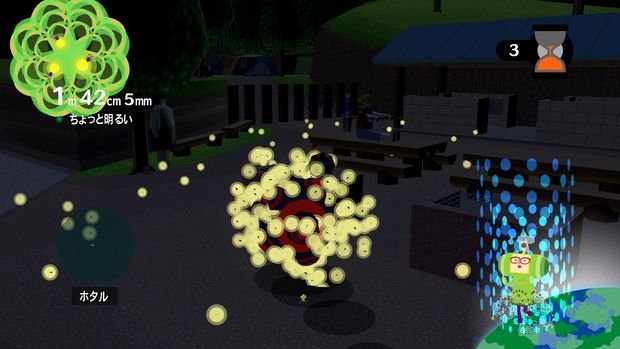 The gameplay is identical to past games. You’ll appear in an environment, be told to roll your Katamari to a specific size and sent on your way to roll up whatever is in your path. RoboKing’s levels tend to be more straightforward in nature, with an emphasis on rolling up as much as possible and some guidelines towards specific types of objects to grab. The King has the more unusual levels in his repertoire, such as the snowman building stage or rolling the sumo wrestler large enough so that he can win his match.

A couple of new concepts have been added. First, and probably most importantly, the Prince can now hop as a maneuver. This allows him premature access to some areas of levels as well as makes the general environment easier to navigate. It takes a bit of practice to use effectively, as the Katamari bounces considerably. Sixaxis motion controls are designed to use the hop when you move the controller upwards, but it rarely works when you want it to, and you’re much better off just using the R2 button for the same effect.

Another change is the inclusion of RoboKing’s Heart, a power-up that comes in two forms, whole and broken. Collecting these items in a stage will draw objects to your Katamari. A broken heart will instantly suck in anything that can stick to your ball from a considerable distance away. Complete hearts draw in objects at a much closer range but last for several seconds, allowing you to roll around and quickly accumulate things.

These hearts add a new layer of gameplay in an interesting manner. They’re completely optional to pick up, just like everything else, and there’s a certain amount of strategy to their use. Timing when you collect a heart can make or break you on a level, as you may collect things that make you considerably larger, but you will likely miss out on smaller, theme-appropriate objects later on because of the quick increase in size. In addition, these hearts are placed on levels where picking up certain things will spell doom for your Katamari, in which case they must be avoided at all costs. 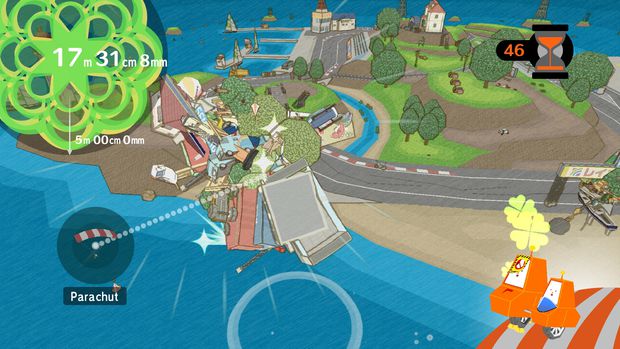 After completing all of the game’s levels, a new mode is unlocked called “Katamari Drive.” This mode has the Katamari rolling at mach speed, making it difficult to control but opening up opportunities to grow in size much more rapidly. Nearly every level has the Drive mode available in it and some of them are made to be very difficult as a result. It’s a good mode that adds to the experience and makes this feel like much more than a standard rehash of content.

Further modes of play are available for unlocking beyond this. “Eternal,” the old standby in which you can roll with no time limits or requirements, returns. And, should you score well enough, the levels can be played the way they were originally released in “Katamari Classic” mode. This mode removes your ability to hop and the new heart elements to return the levels to their original state. It’s a bit annoying to have to work hard to play the exact same thing I’ve already played in a previous game but, at the same time, it’s nice to have the original levels with the improved graphical features of the PS3. 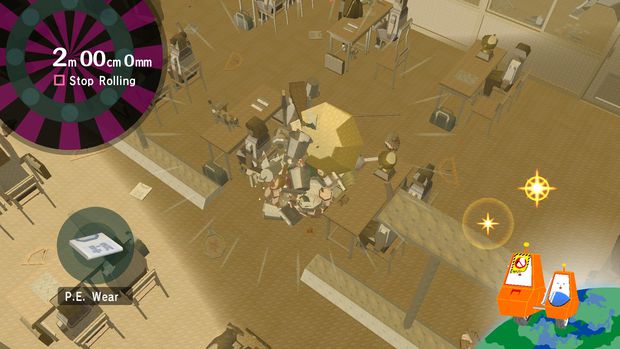 See, Katamari Forever looks fantastic in 1080p and that’s probably going to be enough to convince some longtime fans who already own the vast bulk of this game to pick it up. That’s not an entirely unwise decision, as it really is wonderful to look at. And, on any level (and mode) that you have completed previously, you can choose from one of four different appearances for the game. There’s the updated look of Forever, a filter that makes everything look like it was turned into wood, a sketchy, comic book-style and the appearance of the original games.

The most difficult question to answer is whether or not you should spend your money on Katamari Forever. If you are satisfied with having your old Katamari get a new coat of paint, this gets the job done in a big way. But if the visual appearance isn’t of a high priority for you, all that’s left to weigh are a couple of new moves, a few new levels, another wacky story and a mode where you roll really fast. The amount of new material is not great, but what’s here is interesting.

On the other hand, if you are that rare somebody who has always been interested in Katamari but never made the plunge, this is a strong recommendation. Not the best game, but much of the best in all the games resides here and it’s an excellent overview.