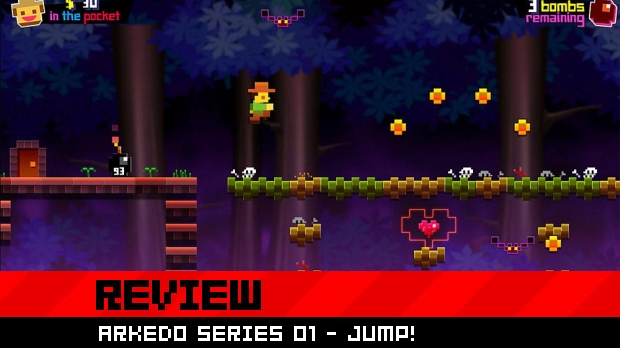 I’ll be as forthcoming as I can: I didn’t finish, nor will I probably ever finish JUMP!, the first of several XBL Indie Game from Arkedo (the guys behind Big Bang Mini, if you’re keeping track) planned over the next few months.

The basic premise of JUMP! is about as retro as retro gets; you’re a little pixelated dude collecting pixelated bombs and coins, avoiding pixelated animals who can kill you with one hit. Also, if you lose all your lives, you have to restart the game.

Not the level. Not the last time you saved, or the last checkpoint you hit. The entire game. This is retro gaming at its most sadistic, gentlemen — and frankly, I wasn’t man enough to complete the thing (I died on level 29). I did, however, spend enough time with it to have a relatively good idea of its overall feel.

For that reason, I’ll still be reviewing JUMP! after the page break, but without a numerical score. 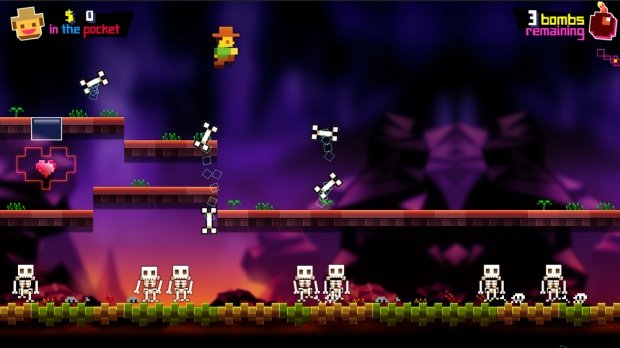 Just because a game is ball-bustingly difficult does not mean it can’t be fun. Ikaruga is nothing if not an exercise in constant player death, but the polarity mechanic is so damned interesting that as you get better and better at the game by understanding more and more of what it has to offer, it ultimately becomes rewarding because of that difficulty. The Mega Man games will kill you over and over without mercy, but as you learn the level layouts and memorize boss patterns, a process that was once jaw-clenchingly infuriating becomes oddly poetic and satisfying. Just because a game is frustrating and difficult doesn’t mean it can’t be great despite, or because of that difficulty.

But that doesn’t change the fact that JUMP! isn’t very good.

You’ll still spend a tremendous amount of time replaying the same mundane levels over again just because you died a few more times than you’d planned, but unlike Ikaruga or Mega Man, you don’t really get anything out of such repetition.

You’re forced to trudge through the same levels over and over again after every game over. Not necessarily because doing so adds anything to your understanding of the mechanics or challenges your reflexes in an interesting way, but simply because it’s the “retro” thing to do — because it’s a greater punishment than what most modern games would dare inflict on the player. 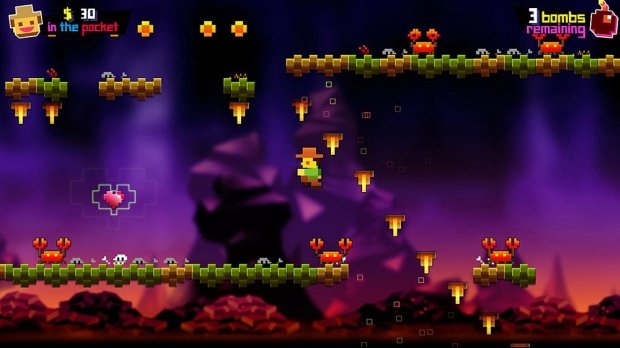 Ostensibly, such high-consequence mechanics are meant to make the act of completing the game that much more satisfying, but I wouldn’t really know; I got so sick of playing the mundane first dozen levels over and over that I lost any desire to continue. If you’ve got more patience than I do, perhaps you’ll be able to wring more out of the game.

The gameplay itself isn’t anything terribly special: the level design, at least for the first fifteen stages, meanders between boring the player with uninspired platforming and killing the player with unfair traps and enemy configurations that cannot possibly be conquered until you’ve died a few times in order to figure out exactly what needs to be done (I’m looking at you, pachinko boulder level).

A few of the later levels are actually quite interesting, however — a level full of nothing but exploding bombs, all about fifteen seconds away from detonating is a definite highlight — it’s just a shame that I couldn’t be see all of them because it meant I would have had to slog through a bunch of dullness numerous times. I’ve got nothing against killing the player a lot or implementing really steep consequences for death, but the punishment has to fit the crime; dying because of wonky level design or my own laziness doesn’t necessarily mean I deserve to do the same boring thing over and over just so I can see the new content. 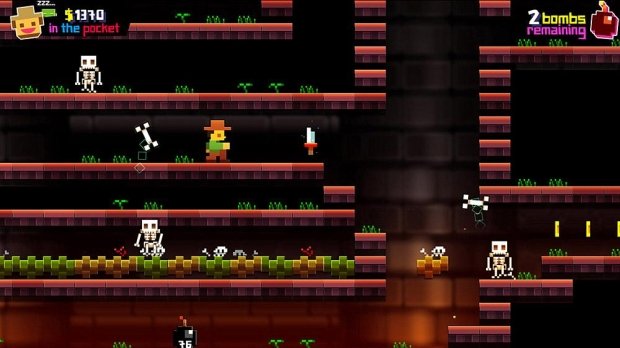 I didn’t even get that small sense of satisfaction one can almost always wrench from even the most irredeemably unfair games: the kind you get from triumphing over difficult platforming sections, eventually learning, after enough repetition, to conquer them with the same ease you might a tutorial level. Quite simply, the first levels just aren’t interesting enough for that. I died because of laziness, or aforementioned unfairness, but never because I felt like I was facing an honest, interesting platforming challenge along the lines of what countless other platformers offer. I had to be kinda-sorta careful about when and where to jump, and in which order to collect the level-ending time bombs, but with certain exceptions I felt very little satisfaction for doing so even once, much less a half-dozen times.

On the upside, JUMP! is quite pretty. I can confidently say, without reservation, that it’s the single prettiest Xbox Indie Game I’ve ever seen. It’s also got a remarkably good sense of humor: the level titles, death messages, and even HUD elements (instead of saying “___ coins,” it says “____ in the pocket,” which is somehow the most adorable thing ever) are all pretty damned cute.

All that said, I also played Demon’s Souls before and after dicking around with JUMP! this weekend, and if you love one, you’ll likely adore the other: they’re both intensely hard and kinda charming, yet they prioritize time commitment and OCD-ness over actual skill or learning. If you’ve got a hard-on for huge challenges or retro sensibilities, JUMP! may be for you; if you’re anyone else, you’re better off playing Ninja Bros.