[We’ll be reviewing WildStar over an extended period of time. For more details, check out our new Reviews in Progress program.]

The time has finally come for WildStar to back up all that hype. For years Carbine Studios has said that they will cater to all of the jaded MMO fans out there, as well as the most hardcore of players seeking a challenge — and that’s quite a tall order.

While they haven’t quite succeeded with all their claims in the early stages of the game, there’s still plenty of time to go on my journey to level 50, and I’m still having a good deal of fun getting there. 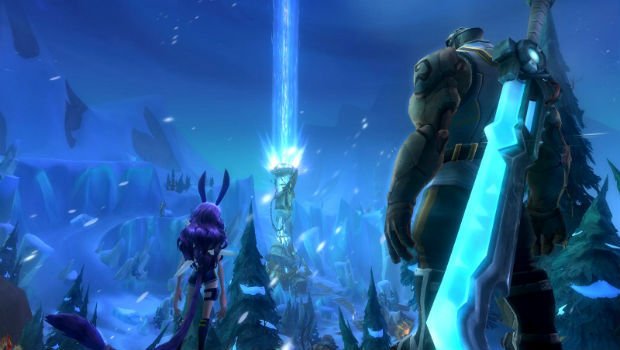 As a frame of reference, my character is currently a level 13 Dominion Mechari Warrior. Exile is the faction, Mechari is the race, and Warrior is the class — with the power to tank or deal out damage (DPS). Yep, you read that right, WildStar is an old-school MMO in that it adheres to the holy trinity of tanking, damage, and healing, for better or worse.

It’s not that strict though in terms of locking classes into singular jobs, as every class in the game can perform two of the trinity’s roles with various specs (ability choices). So instead of being stuck at max level with just one role for months on end, you’ll have the choice to switch between multiple jobs — for Warrior, I can either tank or DPS, the latter of which I’m going to use to level to 50.

Speaking of races and classes, there’s a decent amount of customization within the game’s character creator tool, and the races themselves have more variety than the average MMO. There’s plenty of humanoid choices, as well as tiny rat people (Chua), poison elves (Mordesh), robots (Mechari), rock people (Granok), and a few others. Odds are you’ll find something you’ll want to play as with the class system as well, since melee, ranged, stealth, and support roles are all intact in addition to the trinity itself.

Early game in WildStar is instanced (like every other MMO these days), which serves two purposes — to acclimate you to the game in a controlled environment, and ease the load of everyone jumping into the game at the same time. You’ll learn the general setup of the the game and the planet Nexus, why both factions are warring, and so on. It’s a short hour or so intro before you head off to Nexus’ surface, which will happen around level three.

It’s here that WildStar starts to show off its openness in terms of the leveling process. In addition to PVP, instanced dungeons, and open-world questing, you’ll also be able to choose a “path” — like exploration or combat — that helps you earn new abilities and special path levels separately. If you just like combat, you can be a Soldier and do more quests that way, or if you’re sick of fighting things constantly in every game, you can do other activities like running around and finding new locations. It’s not a game-changer, but it’s a refreshing change of pace from other MMOs that mostly feel like combat grinds. There are also fun world events in the form of challenges and group bosses to help mix things up.

Having said that, regular questing feels very standard, and it almost all consists of kill and gather quests. Carbine has made some concessions to the formula by giving you more “credit” towards quests by killing stronger enemies — so you don’t have to keep killing the same thing over and over — but at the end of the day it’s the same result. There really isn’t a whole lot of leeway here, and after level seven things really started to feel like a standard MMO grind. The good news is you can level in other ways, most notably in PVP. 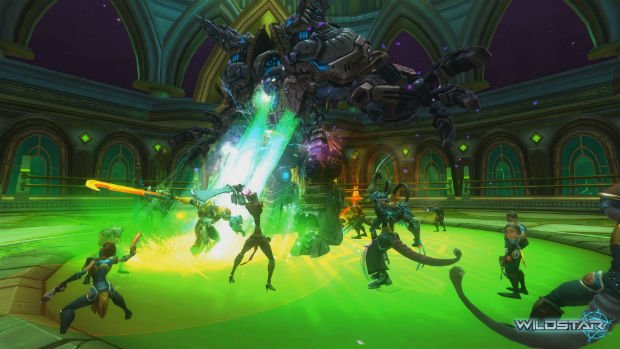 You’ll get access to PVP early (sadly, world PVP doesn’t come until level 30 or so), in the form of a single battleground called Walatiki Temple. It’s basically Capture the Flag with neutral flags (in this case, masks), and direct duels and group combat is inevitable. It’s always intense because you can steal masks from other bases, and you won’t have to wander far for a skirmish, which is a great thing. Not only is this a viable method of leveling, but it’s also a particularly fun PVP system for one major reason — the telegraph system.

Simply put, WildStar telegraphs (shows) all its attacks from both friends and foes. Friendly attacks are designated with a blue color on the ground (in the shape of the attack), and enemies are red. This gives you a chance to not only dodge attacks, but coordinate heals, stuns, and group attacks with teammates. It feels more action-oriented than most games, but still retains that tactical overhead MMO feel that other games have.

It really comes together when you’re having an intense fight with lots of dodging involved, only to find out that you have to further dodge other world hazards, which are also telegraphed. It’s not as fast-paced as TERA‘s combat, but it’s a great middle ground for those of you who feel like the old style of MMO combat is outdated. Jumping puzzles and even dodge puzzles are fully intact, which also breaks up the monotony. 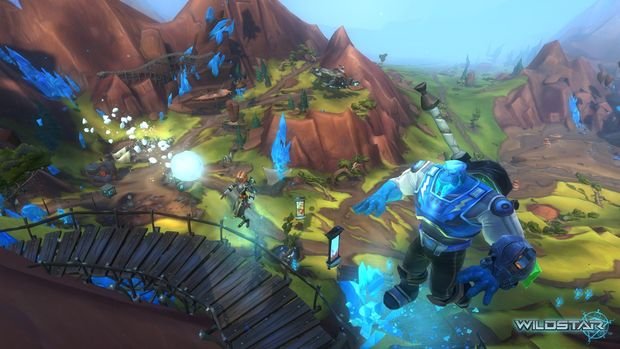 WildStar is a particularly pretty game, mostly because of the cartoony art style that isn’t afraid to use more than dark colors. It’s reminiscent of World of Warcraft for sure, but much worse from an optimization standpoint. In other words, if you have an older PC and are attempting to run WildStar, you likely won’t push a frame rate over 10 FPS. It’s strange, because the game doesn’t look as incredible as say, Final Fantasy XIV, but it runs slower on the same machine. Hopefully more optimization will occur in future updates to alleviate the problem with older machines (I’m currently achieving 60 FPS consistently with a high-end laptop, but a lot of fellow players have been complaining about poor optimization as well).

Carbine Studios has responded to early access server issues by opening up new ones, though queues for the old servers (where your friends likely are), are huge. I’m talking five hours or more, and it’s clear that they will need to ensure that this doesn’t happen with the game’s launch tomorrow. Of course, after about a month when the game loses some subscribers (standard practice for MMOs), things will likely even out. It’s not ideal but it’s far from a complete disaster in terms of an early launch. We’ll keep you posted.

Nothing about WildStar‘s early game experience blew me away, but there’s not a whole lot wrong with it either from a traditional MMO perspective. As we all know MMOs open up the more you play them, and with the dynamic “choose your own adventure” events coming up as well as the always crucial endgame test, be sure to stay tuned as I work my way through all of the content. For now, I’m having fun — but we’ll see if it’s worth paying a subscription for.