The first 10 hours of spoilers

We found out last week that Destructoid would not be receiving a review copy of The Legend of Zelda: Breath of the Wild for the Wii U. We only got the Switch copy Chris Carter reviewed earlier this week. As the person selected to review the Wii U version of this long-awaited game, I have not read his review. Or any review for that matter. I don’t even know what its Metacritic score is. Hell, I haven’t seen a trailer for this game in months, catching only a glimpse of it in various commercials I’ve seen on TV.

I made the decision a while ago to go into Breath of the Wild as blind as possible. It had been promised this game would be significantly different from past entries and progression through it would differ from person to person. So I stayed away from the previews, reviews, and available guides. What did this dedication to naivety get me? In the first 10 hours of the game, it got me lost. Very, very lost. 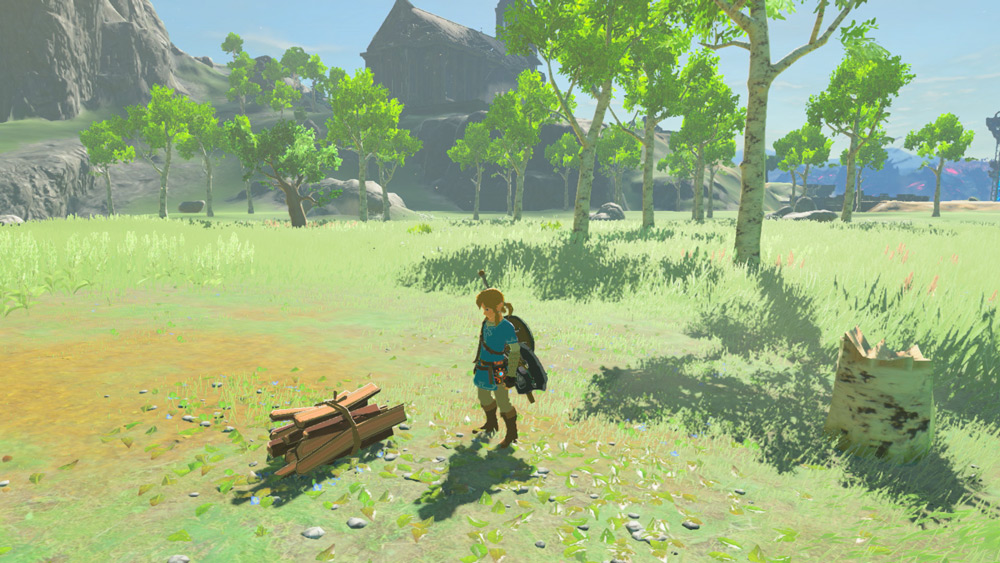 I shut the game off to write this review in progress, stranded on the north-eastern most part of Hyrule. In the distance, I could see a few islands, but I’m not sure if I’d ever be able to reach them. To my left was a massive cliffside, blocking what I thought would be my path to one of the four divine beasts I’m supposed to revive in order to defeat the Calamity Ganon. But it was a dead end, and the last hour of making my way to this point was for naught.

10 hours prior, Link emerged from his cave, giving me my first look at the massive Hyrule. I was taken back by the impressive draw distance. There were no Skyward Sword watercolor effects or Wind Waker formations slowly coming into view. I could see everything, and as we were promised years ago when this game was first announced, I wanted to see how far I could go.

Before I could do that, I had to make my way off the starting plateau. Given very little direction on what to do, I started gathering every weapon and consumable I could and headed towards the dilapidated Temple of Time, where I grabbed my first bow and arrow set. Unlike Zelda games in the past, there was a decidedly small amount of pomp and circumstance. From there I activated the first Shiekah Tower, solved the puzzles of the first four Shiekah Shrines that unlocked components of the Shiekah Slate I received at the beginning of the game, and then leaped down to the world below.

As I glided down to the treeline below, the rubberbanding framerate became quite noticeable. It stutters, not just in inclement weather but also in towns and villages. Thankfully, it’s never so bad it interferes with any aspect of the game, but it is there. There’s also an issue with objects popping in. Again, it’s purely an aesthetic issue and hasn’t been that big of a deal.

Also not a big deal: breakable weapons and the stamina meter. Your meter refills quite quickly and Link’s normal speed is fast enough. Weapons are so bountiful in the game that when I broke one there was almost always a replacement readily available.

What has been an issue for me has been the controls. I still am at a point where I press the wrong button and more than once I’ve dropped a bomb instead of throwing it, blowing myself up in the process. Breath of the Wild makes full use of the buttons on the Wii U tablet, but does nothing with the touch screen. Given the Slate is supposed to represent your tablet, I am often left to wonder what could have been had Nintendo decided to make this a Wii U exclusive.

Finally on the ground, I headed west to Kakariko Village where I met Impa, who gave me the task of reviving the four divine beasts to help Zelda. Everything I had done up to this point had been on the set path given to me by the Old Man on the plateau. But after completing the shine at Kakariko Village, I decided to do a bit of exploring. So I left the beaten path and ended up on Lanaryu Road. After nearly meeting my demise by some water beasts, I reached the gate at the end of the road where I was promptly killed by what looked like a massive Lynel. Clearly, I wasn’t supposed to go there yet, but the allure of the mountain in the distance called to me, beckoning me to proceed.

Breath of the Wild‘s ability to capture my curiosity is what I find so fascinating about it. There have been so many moments, so many points where I see a shiny object and just follow after. Usually, it’s a Shrine in the distance, but I’ve also come across a luminescent dragon that led me to Lake Hylia and my second memory. The game, the map design, just goads me along, tempting me to look just around the very next corner or rock formation. The drive to just pick a direction and go takes me back to my time with World of Warcraft and The Wind Waker before it. I love to explore, and this game is just giving me so much to do and see.

I eventually made my way back to Impa, and eventually to Hateno Village, where I unlocked the final Slate ability: the camera. With that, Impa gave me a second task: find 12 locations around Hyrule that will restore my memory. Looking at the pictures of where I was supposed to go, I instantly recognized one. It was the gate where I had just been killed. Had I not wandered off, I wouldn’t have known that memory was so close.

It’s moments like this that make me think getting as lost as I am is okay. I may be way off the path I’m supposed to travel, but I don’t care. I’ve found and completed about 13 Shrines, expanded my heart count and stamina meter, discovered two memories, uncovered numerous Korok’s to unlock greater storage capacity for my weapons, and paid 100 rupees to a voluptuous Great Fairy who thanked me by powering up my armor.

The unique order of these experiences has only been possible thanks to Breath of the Wild‘s willingness to let me act on a whim. It’s a type of freedom I haven’t experienced in years and a complete 180 from Skyward Sword. I’m completely intrigued by this game and I haven’t even traversed my first dungeon yet. I don’t know what the next 10 hours hold — hopefully a dungeon — but right now I’m gobsmacked by how enjoyable this romp through Hyrule has been.