The Division came out a little too half-baked for my taste. It seems like a lot of people felt that way actually, and while Ubisoft could have let it rot, much like several other recent franchises under their wing, they slowly chipped away at it until it became a more presentable prospect.

Although you’re effectively starting over, the sequel is partially a result of all of that hard work: complete with several of the same mistakes. 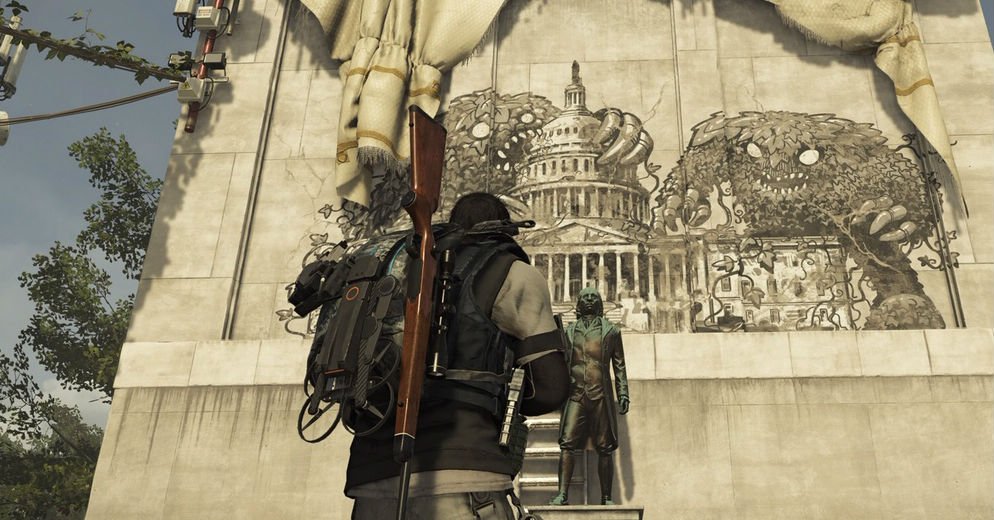 Nothing has fundamentally changed. We’re out of the New York frying pan and into the Washington D.C. fire, but this is still a looter shooter governed by the same “good survivors versus evil survivors of a pathogen-based apocalypse” conceit.

The “DC is burning” setup is a little more interesting than the generic New York City feel of the original. Yet, much of The Division‘s newfound environment is rote and devoid of life. My main problem with the gritty world of The Division, in general, is that it often just plan tries too hard. It’s tough to recall any major personality traits or names of any characters the day after a lengthy session, much less weeks from now. The silent protagonist angle doesn’t help.

At the end of the day amid a sea of sci-fi and fantasy looter shooters, The Division is bound by the realistic rules of its universe, which gets grating after killing the same generic “bad guy” human model for the thousandth time. Having a base at The White House seems cool until you realize that most of it consists of surface-level bunker real estate, much like many of the other bunker bases in the series. There’s little nuance in the world of Division despite its ostensible urgency.

This is the hardest thing to reconcile when playing The Division 2 and something I’ll probably struggle with throughout my time with it. Efforts have been made to allow for more interesting encounters with armored-up foes (they’re less spongy if you blow off their armor and focus on their vulnerable spots), but it does feel very limited in terms of surprises.

The good news is that although Massive Entertainment still hasn’t managed to nail characterization, they’ve absolutely locked down pretty much everything else. Mechanically The Division knocks it out of the park, offering up smooth shooting mechanics and a respectable amount of playstyle variety. This time around it actually feels like a Division game will be worth playing long term.

What I like most about The Division 2 is that none of your time feels wasted. Even in the early game, missions don’t feel like throwaway excursions and you’re decently rewarded for your efforts. The flow is very smooth, as you can run the matchmaking tool for story missions and continue to explore the open world, coming across hidden caches and random events. It’s mostly genre-typical fare but enjoyable nonetheless, even solo.

Combat is engaging, as skills are impactful (I’m running a full DPS build with a damage-variety drone and turret) and the cover-based conceit makes for some tense moment-to-moment gameplay. Enemies actually bother to flank now and are fairly formidable, even on the standard difficulty setting. The danger of a hazard like a pre-cooked grenade or motorized bomb robot forces you to actually pay attention.

Despite my misgivings with the narrative The Division 2 is a polished shooter and that counts for a hell of a lot. Mission variety is on point, there seems to be a decent amount of progression available, and there’s a lot to do. Stay tuned as I work my way up to max level (30) and beyond for the final review. So far, it doesn’t seem like this iteration needs an “Update 1.4” to save the day.

Filed under... #reviews in progress#The Division#Tom Clancy's The Division 2#Ubisoft