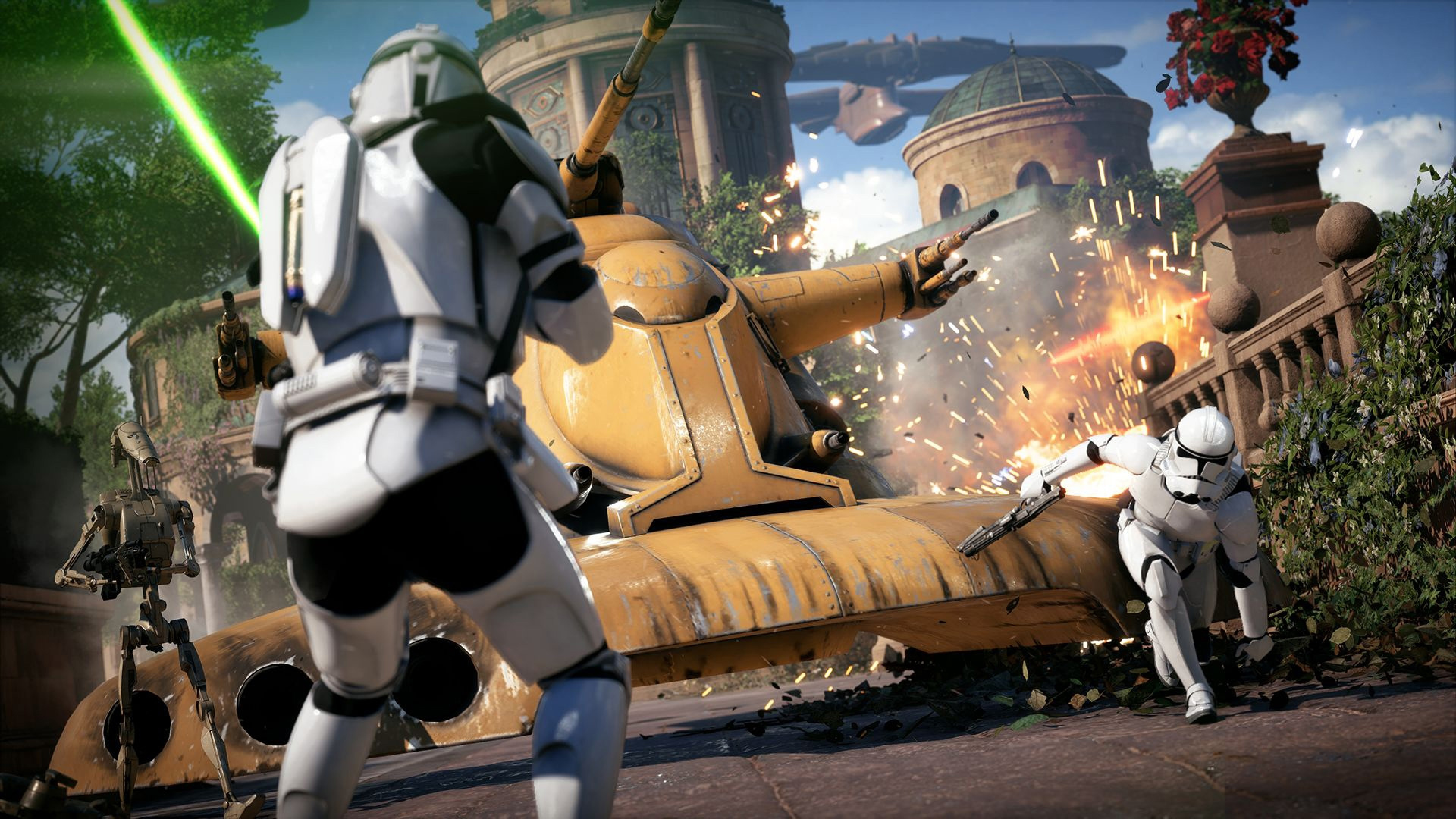 It’s simultaneously the game I wish we would’ve gotten from DICE last time around and also a worst-case scenario with its far-reaching, impossible-to-ignore loot boxes and progression system.

I’ve had a few co-workers ask me how Battlefront II is going so far. My immediate reaction is to spout off a range of thoughts, touching on the middling campaign and its overuse of cameos, the much-refined space combat and hero vs. villain modes, and the dreadfully slow pace of unlocks, among other stray observations. I just can’t seem to give them a quick, concise take. That’s partially because I need to spend more time with the multiplayer, but it’s also because this game is all over the place.

The most straightforward thing to cover is the story, which sees an Imperial commander and her special forces Inferno Squad do their part to squash the rebellion — at least in the beginning. Battlefront II bridges the events of Return of the Jedi and The Forces Awakens, and given how the former movie ends, well, it’s no secret that things aren’t looking great for the Empire. The four-to-five-hour campaign follows a lot of beats you’d naturally expect given its setting and protagonist, and a few you wouldn’t.

At certain times, the campaign comes across as a tacked-on, adapted-from-multiplayer excursion, but during its best sequences — notably the aerial battles, including one memorable level that transitions from dogfights to on-the-ground combat and back again — it reaches greater heights. To have something even remotely approaching the Rogue Squadron games again was a great joy for me.

That said, Battlefront II could have done so much more with Inferno Squad and its increasingly conflicted leader, Iden Versio — but it’s much too busy shuffling you from one spot to the next for that kind of character development to ever stand a chance. It also doesn’t help that a significant portion is spent playing as existing (and far more recognizable) characters from Star Wars lore. There are several swaps throughout and without spoiling any of them, I’d say only one or two felt warranted.

The end result is a single-player jaunt that gets the job done, exceeding expectations in some areas and falling short in others. I’d hesitate to recommend picking up Battlefront II solely for its campaign, but if you ever do play the game down the line, it’s worth taking the time to run through this part of it.

Which brings us to the bulk of the Battlefront II experience and the part that has agitated huge swaths of internet-goers: the multiplayer. When I first heard that EA was dropping the season pass model for the sequel, I was thankful; I didn’t want to see the community divided like it was in Battlefront.

But if the price we have to pay for free post-release maps, modes, and heroes is an overzealous loot box model that mars the entire game, I’m not convinced it was worth it. With famed characters like Luke and Vader needlessly locked behind in-game-currency purchases, and alternate and even straight-up enhanced character/ship/hero abilities obtained from randomized loot boxes, it feels like a scummy race to see who can become overpowered the quickest. DICE has made tweaks and will surely make more as people continue to voice their entirely warranted disapproval. For now, at least weapon unlocks are genuinely earned through play, and in-game challenges help lessen the grind. But that’s not enough. They need to overhaul. They need to start emphasizing cosmetic rewards over stat-altering gear.

Let me put it this way: I wouldn’t feel good about Battlefront II‘s progression system even if there were no way to buy loot boxes with real money. It’d still be a drag. And the fact that we’re talking about a full-priced, big-publisher, triple-A game here makes the whole situation even less forgivable.

It’s a shame, because this game addresses so many of my issues with 2015’s Battlefront. It has a more fleshed-out, refined breadth of content. Space battles feel meaningful, with strategic objectives for both sides that aren’t just “everyone meet in the middle and kill each other a bunch.” Heroes vs. Villains mode actually lets everyone play as heroes and villains now, enabling me to gun down Yoda and Han as a bounty hunter lizard man with Predator vision. There are even decent customizable single-player offerings beyond the campaign. But damn if Battlefront II isn’t bogged down by corporate greed.