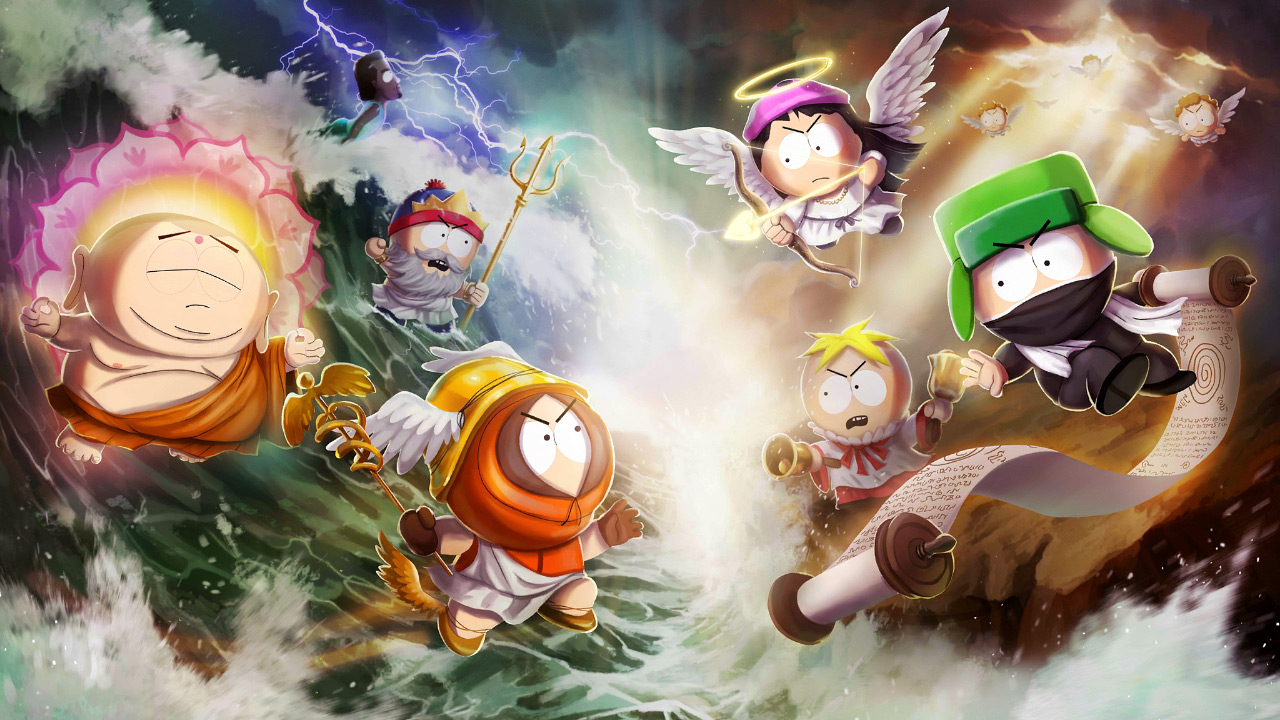 The new kid in town

This past weekend was my first time playing South Park: The Stick of Truth. Getting it as a bonus with my purchase of The Fractured But Whole, I finally decided to give it a shot and ended up beating the entire thing in two sittings. It’s a great fucking game and it completely wipes away years of absolute garbage South Park games. And I’m talking some real shitty titles. South Park Rally anyone? Playing that is like finding out you just ate your parents at the Chili Con Carnival.

Thank God for The Stick of Truth because we now have a blueprint for future South Park games. South Park: Phone Destroyer is very much in the mold of Obsidian’s near masterpiece but it could prove to be more problematic the longer I play.

South Park: Phone Destroyer does a lot of things right. There is a full campaign, complete with a hilarious story casting me as the new kid playing a new game with the children of South Park, using my phone to summon western, sci-fi, religious and other variants of the characters onto the battlefield. The campaign is broken up into short stages that each play a bit like a beat-’em-up where I don’t actually lay the smack down on anyone. While my avatar does have a weak lightning attack, it’s the cards I summon that do the majority of the damage.

As with similar mobile card games, each card has a cost that draws from a constantly filling meter. To keep consistent with the world, there can only be one version of a named character in play at a time. That includes my enemies. If I am up against a Stan, I can’t play one of my Stan cards until he is defeated. There is no energy meter to worry about when going through the campaign. Phone Destroyer wants us to play for as long as we want or at least until we hit that barrier of progression.

Each stage has 25 levels of difficulty and I can replay them as much as I want, though I can’t return to easier difficulties if I find myself outclassed. Character cards can be upgraded with supply cards and in-game currency, but to actually increase their level I need to collect multiples of the same character. These cards are bit more difficult to come by than I have experienced in other apps. When I win a stage or win in the PvP mode, I get to open three out of eight lockers as my reward. Each locker contains a card, usually one that gets me more coins or supplies. There are chances for a character card here, but it’s rare and there is no guarantee I’ll pick the right locker.

In the campaign, it looks as though every card in my collection can be put into play. In PvP, I have a deck of 12 chosen cards. Like the campaign, I cannot play two of the same character at once, but my opponent and I can play the same cards without worry. Decks, at least at the point of the game I am at, appear to have a limit of two themes. So I can’t have western, sci-fi and religious cards in the same deck.

PvP may be the weaker aspect of the package as it exposes a real lack of strategy. Beyond just putting a card into play, I don’t have much control over the battlefield. Cards have attributes that can be beneficial, such as Storyteller Jimmy who lowers the attack of anyone in his immediate vicinity or Outlaw Tweet starting each play by lobbing a stick of dynamite at the enemy. However, those traits don’t really help me when I’m completely outclassed by my opponent’s deck.

It’s easy to get railroaded in PvP. I have seen some claims of Phone Destroyer being horribly hacked, though I obviously can neither confirm nor deny that. What I can say is some cards are extremely overpowered. Dogpoo, for instance, even as a level one card, is incredibly strong and takes an immense amount of hits to take out. I don’t have him in my deck and every strategy I’ve tried against him doesn’t really work. Part of that is some character attacks are difficult to account for. Take pigeons or rats. They mob an enemy in great numbers like the Skeleton Army in Clash Royale, but they don’t stop or slow down any characters and are easily wiped out by a wide array of different attacks.

In these first few days, Phone Destroyer has been a bit of a rough play. I experience multiple instances of the app freezing or crashing, including when I was given a free deck of cards that I was never able to claim. The game can be slow to load with many loading screens to deal with. It’s also not exactly what I’d call well organized, causing me to sit through several loading screens if I can’t remember exactly where it is I am looking for.

Right now, the biggest issue going forward — at least without paying any money — is potentially hitting a point where I am no longer able to compete in the campaign or PvP because I just don’t have strong enough cards. I hope that’s not the case because, besides the lack of strategy in PvP, Phone Destroyer is a pretty damn fun app.