In which I spoil two of the dungeons

When I last left off, I was lost somewhere along the northeastern coast of Hyrule. I had yet to experience one of the game’s dungeons, didn’t have a horse in the stables, and hadn’t even figured out how to cook yet. 20 hours later, that’s all changed. I’m no longer lost. With a new sense of determination, I’ve set Link on a path north to find more Shrines and hopefully The Blade of Evil’s Bane. 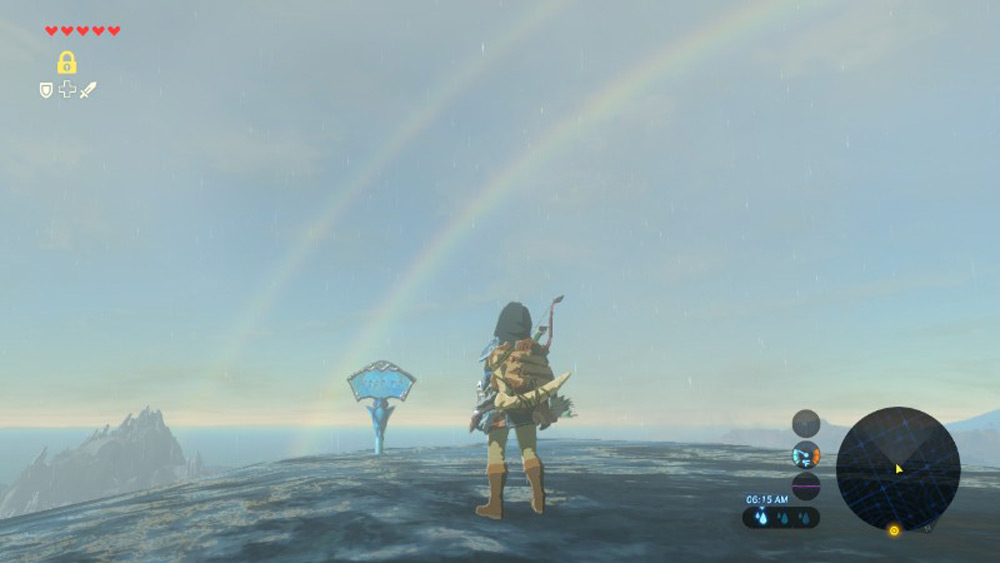 Realizing I couldn’t proceed north any further on this particular spot on the map, I decided to try my luck back south. Using the fast travel system – a godsend in a game this big – I headed to Kakariko Village and then towards the ocean. Well, that was the plan. The siren call of the unknown took me in a different direction. I spotted a tower in the distance and decided to unlock the map for this area. Before I could reach it, though, I was stopped by a Zora. She directed me to a nearby river where I would meet Prince Sidon and begin the treacherous trek to the Zora Domain.

At this point in Zelda history, the road to the Zora Domain as a troublesome and danger packed voyage is well established. Breath of the Wild amplified the challenge of getting there. This long and harrowing journey was an adventure all of itself, forcing me to rely on my skills of stealth to reach it in one piece. Sidon, this game’s Groose, cheered me on as I made my way up the mountain, facing camps of lightning-armed Moblins.

When I finally reached the beautiful city, and it is a sight to behold, I was given a task to complete. The Divine Beast Vah Ruta was flooding the reservoir, threatening to destroy the Zora Domain and wipe out a good portion of Hyrule. By now I had figured out the Divine Beasts would be the dungeons of this game, so I was extremely excited to get inside of it. After stealthily collecting shock arrows from a nearby Lynel (a big shout out to Zack who, with just five pieces of heart, managed to kill the bastard), I was treated to an awesome action sequence riding on the back of Prince Sidon as I shot arrows into the beast to calm its gushing hissy fit. It was epic, spectacular and a refreshing change of pace from everything else I had done up until that point. 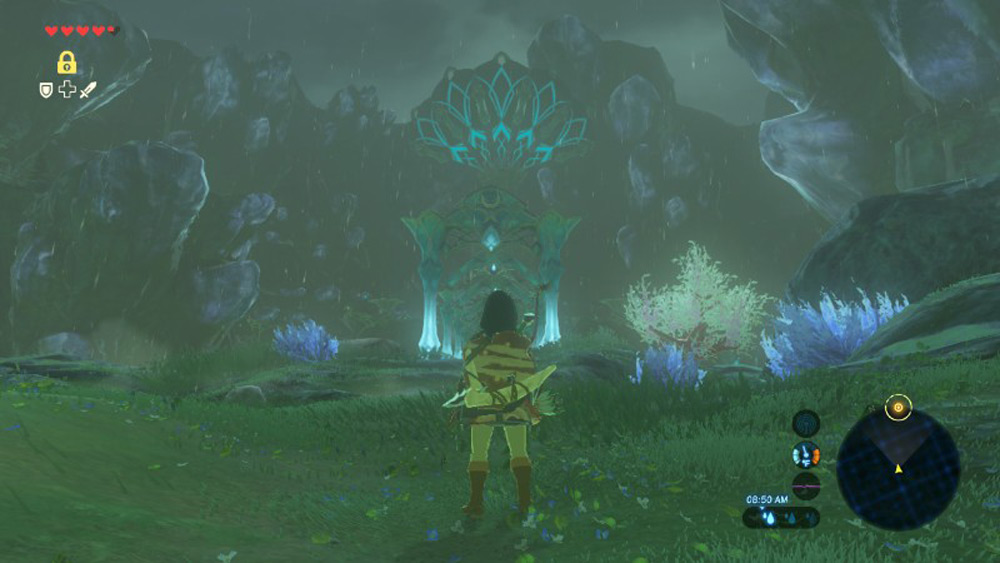 With the beast calmed, it was time to head inside and take back control of it from Ganon. During Wild‘s development, we were told players could challenge the dungeons in any order they wanted. This is achieved simply by making the dungeons, at least the two I’ve played so far, massive puzzles. There are no special tools to find, no keys to pull out of chests, no enemies you can’t already handle, and no compass to guide you to the different chests. To complete these dungeons, all you need are your puzzle-solving skills and the basic weapons you’ve picked up on your journey.

It’s a massive break from past games that relied on some piece of equipment to proceed through the dungeon and defeat the final boss. That formula, one I still adore, would feel out of place in this stripped-down version of Hyrule. This game has been about nothing but the absolute basics of combat and problem solving, and these dungeons have been a ripe opportunity to test our skills in both of those respects.

The key to getting through this dungeon, as well as the second I completed over the weekend, is manipulation. Using the 3D map, you have to manipulate the trunk of the elephant beast to have the water work in your favor so you can activate the stations inside. After doing that, and making sure I collected all the chests, I proceeded to the control terminal and instigated my first real dungeon boss battle.

Like I said above, there is no special tool to collect here, so defeating this agent of Ganon meant mastering my basic combat skills, in this case, archery. Unlike Zelda games of yore, there is neither a big eye to attack nor an easily predictable attack pattern. There was just me taking everything I had learned about shooting arrows and applying it to the situation. It took me a few attempts to slay it, and I did have to leave the dungeon to get more arrows, but I was able to do it, freeing the soul of my childhood friend Mipha in the process. She thanked me and blessed me with an instant revive if I should fall in battle, one that has a cooldown period after each use. 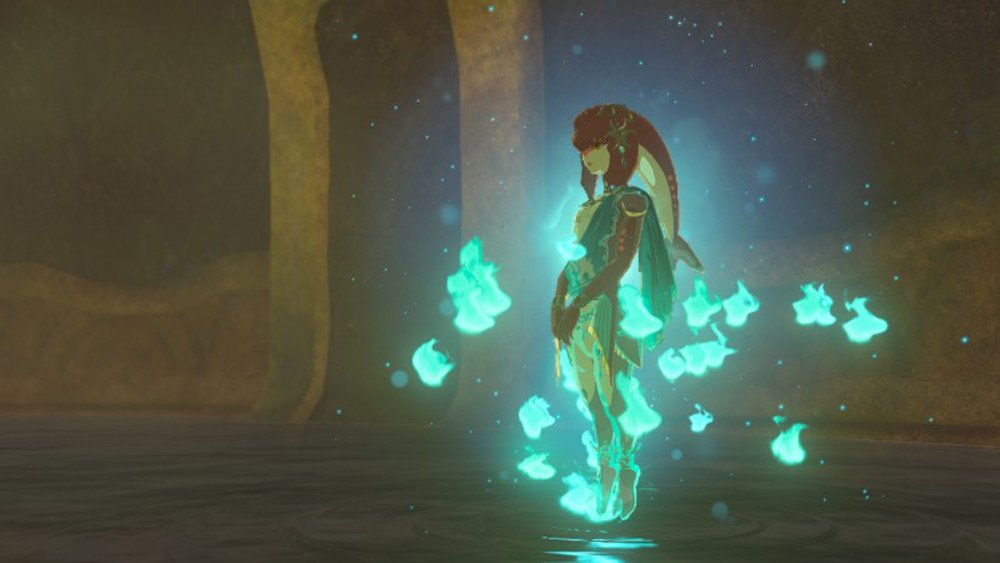 The feeling of running through the dungeon had me elated and I wanted to keep those endorphins flowing. So I headed west to the desert, encountering a Gerudo for the first time. Entering Gerudo Town required me to dress up like a lady, so I quickly found the Harem Link costume and felt a great disturbance in the force, as if a million Tumblr accounts cried out in ecstasy.

To the south of Gerudo Town, the Divine Beast Vah Naboris was kicking up a storm. Before I could get inside, I had to head east to confront the Yiga Clan, a group of assassins and thieves who serve Ganon. It was a far distance to their hideout, and while I could have walked, traveling by Sand Seal was so much more enjoyable and faster. Seriously, Sand Seal surfing is amazing.

The Yiga Clan hideout requires stealth to survive. The Yiga are watchful and will kill you if they see you. But they also love bananas and watching them flounce over to each bushel I would put in their path brought a bit of that classic Zelda humor into the game. With only some bananas, a sword, and my ability to whistle, I was able to knock off every enemy in the place and face their leader in a battle reminiscent of classic Zelda boss fights. It was charmingly familiar, feeling almost like a throwback at this point.

After some more Sand Seal surfing and testing of my archery skills, I was able to board the massive desert divine beast and get to work. Knowing the dungeon would require some form of manipulation to proceed, I got through this one much more quickly than the first one. That is until I reached the boss battle and realized I had been playing this game all wrong. This many hours in and it still hadn’t hit me that I couldn’t play it like a regular Zelda game. I was still proceeding as if there was a fairy before every boss fight or a set of pots to break for arrows, bombs, or whatever tool I would need to beat each boss. 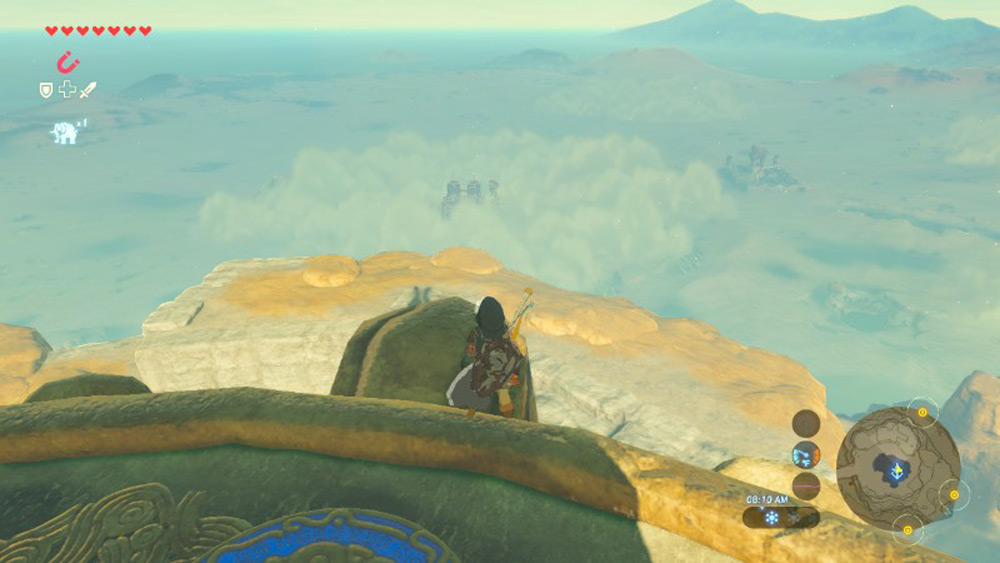 That’s not the case. I realized as I was killed again and again by this second dungeon boss that I had to change how I approached each situation. I had to prepare for everything and anything. I eventually managed to defeat the creature, but it was a real eye opener for me.

After I completed dungeon and saved Gerudo Town, I decided to unlock the rest of the southern map. In this time I figured out how to cook food, found an island in the south that really tests how well you’ve adapted yourself to the game, and grabbed my very first horse that I named Gabe.

I’ve been on the lookout for bugs and other issues. While I haven’t played many open world RPGs, I have seen the videos of all the crazy distorted faces, flying horses, people stuck in buildings, etc. I’m almost a bit disappointed I haven’t run across any of those types of humorous or horrendous issues. My journey has been relatively technical-problem free. The only issue that seems to repeat itself is overlapping dialog in the cutscenes, but just like the framerate issue I discussed last time, it’s not that big of a deal.

30 hours in and a lot has changed for me. With just two dungeons to go I can feel the end slowly creeping up on me, but with so many side-quests left unfulfilled, so many memories still absent from Link’s mind, so many parts of the map not explored, and so many Shrines left undiscovered, I feel like finishing my quest so soon would do nothing but leave me wanting more.