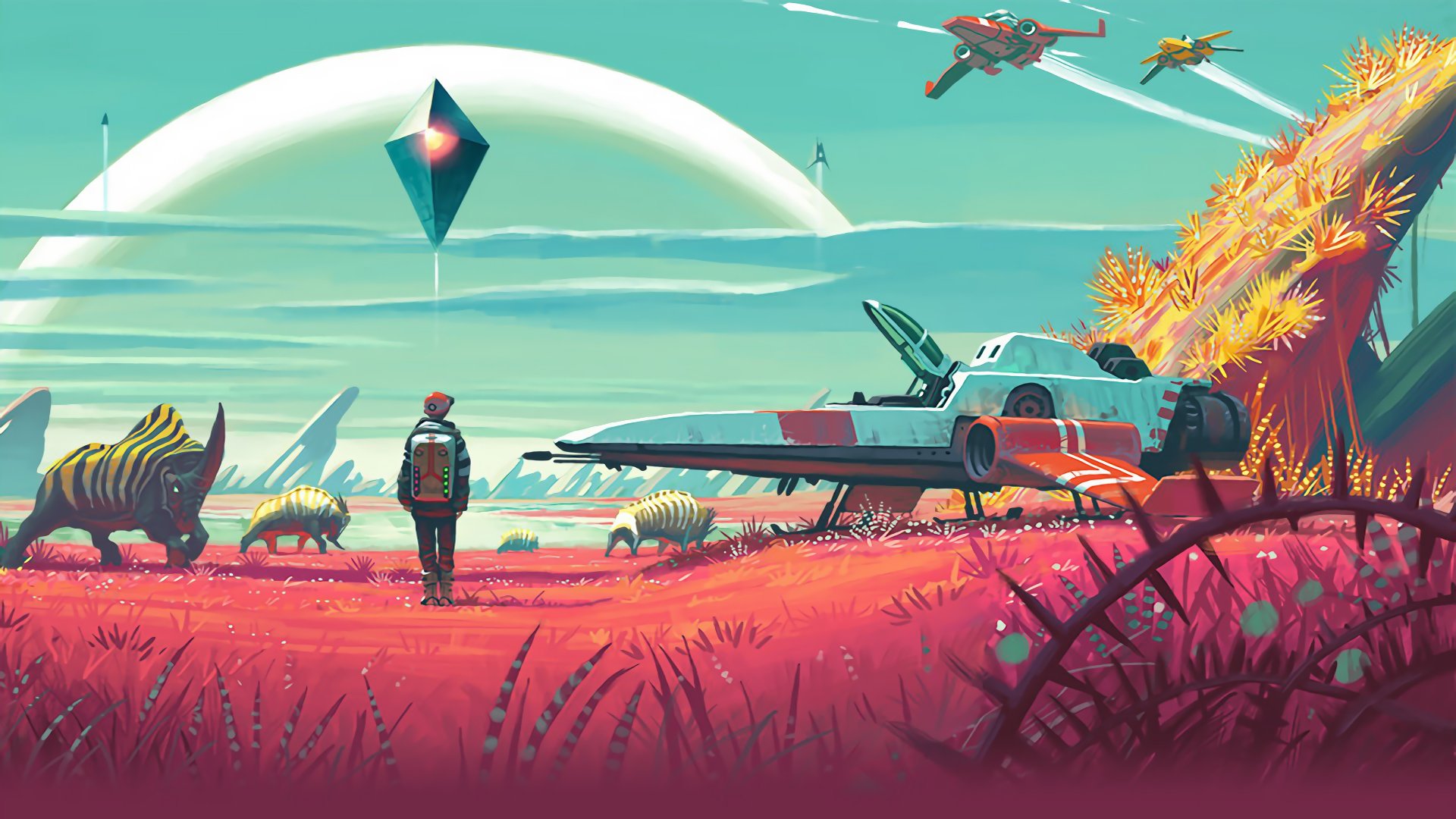 Every once in a while a game comes along that reaches gargantuan hype levels that are relatively unsustainable. No Man’s Sky hit that peak several years ago, in no small part due to Sony’s marketing.

I often talk about the exact moment when I get to actually play something like this. A moment where the game is downloaded, in-hand, and ready to go. I get to see how it measures up for myself, devoid of the marketing machine and loud voices trying to sway my opinion.

Well, after finally playing No Man’s Sky, I can say it’s not everything you probably hoped it would be, but Hello Games has delivered on a lot of what it set out to do when the spark of the idea happened five years back. 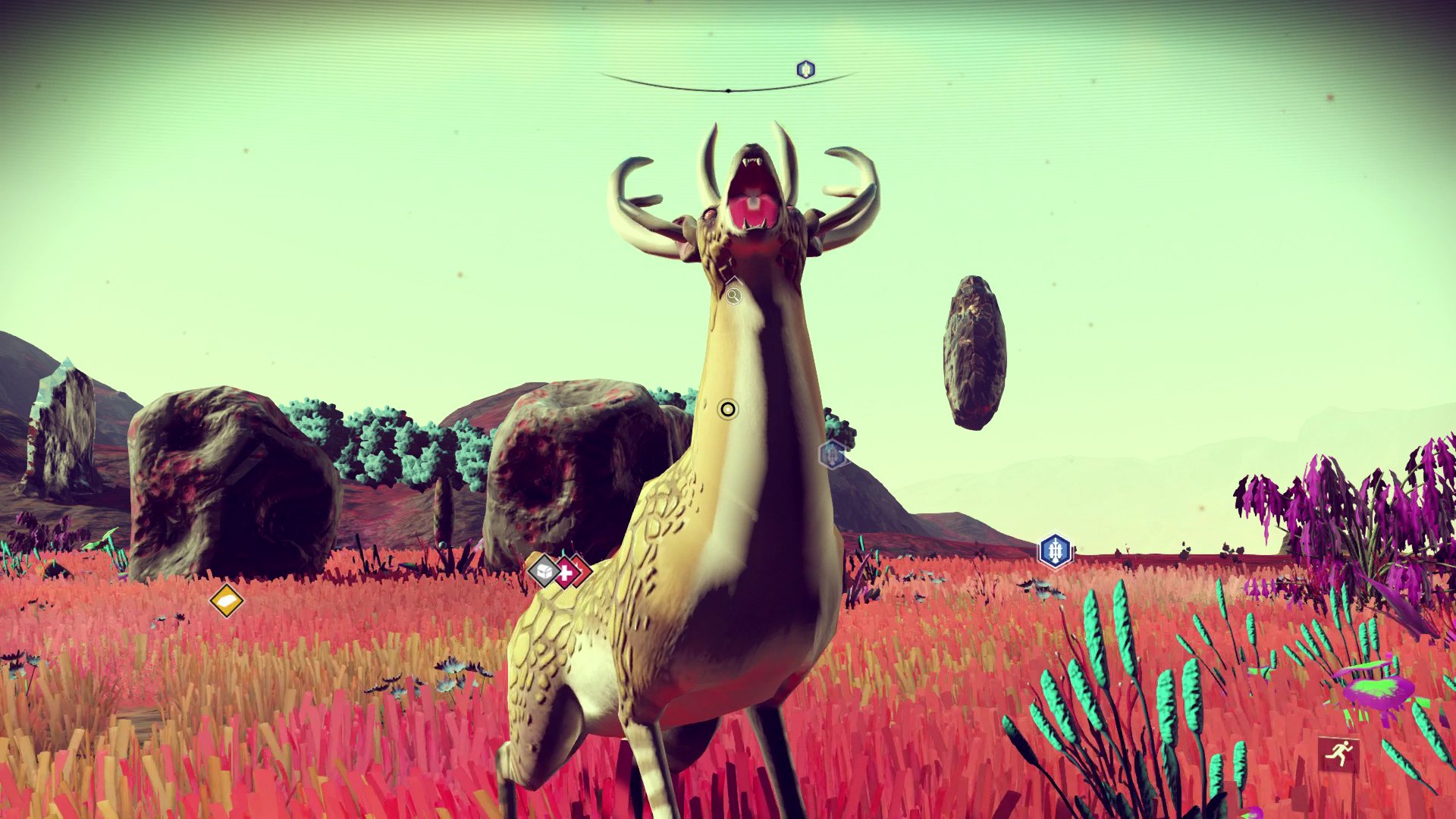 “What is No Man’s Sky?” has been one of the most-asked questions in recent memory, but it’s not all that hard to ascertain once you’ve dug in. It’s part Minecraft, in that you can explore large biomes and generally do what you want with them (minus the creation aspect). It’s part space simulator, in that you can move about the galaxy, and engage in trading and resource acquisition. It’s a first-person adventure game, full stop.

And what an adventure it is, once you repair your ship in what essentially amounts to an intro sequence, and blast off into space, seamlessly, for the first time. Many games have tried to do it (a few have outright been canceled), and only a handful have succeeded. But the way Hello Games has hidden loading screens here (outside of very obvious warp drive sequences between galaxies, which don’t happen all that often) is a triumph. One minute you could be diving down into the depths of some new monument, and the next, you’re refueling at a space station that’s several light years away, all with no loading or menus involved.

The surfaces of each planet are huge, but collectively I’m starting to feel the burn after about 10 hours of play. You see, the planets themselves are singular biomes, and the level of diversity I’ve seen so far (I’ve discovered around 10 locations) isn’t all that varied. Obviously this is an “endless” game that’s meant to be played for months on end, and it’s “impossible” to find everything, but the randomly generated terrain could stand for several more extreme themes to at least create the allure of a vast, expansive universe.

So what can you do on these planets? What did I tell you? Explore! There’s resources to gather, wildlife to tame and interact with, alien life forms to barter with and befriend, sentries and pirates to battle with, and landmarks (including Ubisoft-style “radio towers” that highlight points of interest on a planet) to find. A lot of these aspects are muted, in the sense that there isn’t enough to do in any given area to fill up an entire game, but they all come together nicely to form the meat of No Man’s Sky, and provide enough activities to keep you going.

For instance, combat is not the focus of the game, it’s what you make of it. The enemy AI is pretty basic, and won’t put up much of a fight as long as you can somewhat aim your reticle. Trading will appeal to a very small niche — the types of people who live in menus in games (you know who you are). The process as a whole doesn’t really feel as organic as it should at points.

There’s tons of positive reinforcement, though. Little ancillary things like “knowledge stones,” that grant you access to additional phrases of an alien language are ace. Other “big deal” milestone pop-ups will make you feel good too, like notifying you when you’ve discovered a certain amount of planets, progressed through a certain part of the story, or achieved some other goal such as “ran 1,000 miles.” It really drives the whole “do whatever you want” theme home, even if there is an endgame of getting to the center of the universe.

Amidst all of this enjoyment belie several gamey kinks. For one, inventory management is a nightmare. At the start, when you’re just learning what elements and resources are the most useful, as well as what items make the best crafting bases, it’s not a good look to run into immediate storage issues. In other world-building games you can put droves of items in a chest of some sort (or multiple containment units), but Hello Games has instead opted for your ship to serve as the “bank” of sorts — a ship, mind, that doesn’t have that many more slots than your person. The decision to bind upgrades to inventory slots is also mind-boggling.

This funnels into a bigger problem — how this design choice directly impacts gameplay. Not only do you need engine fuel, but you also need “launch thruster” fuel to even take off. I’m not necessarily talking about going from planet to planet, just even skimming the surface to fly to another location takes a separate “launch” fuel. Many times I’d accidentally launch my ship on a planet’s surface, only to land back down and find myself stranded because I exhausted 25% of my fuel. So I’m basically at the mercy of the planet’s resources (Thamium9 or Plutonium, in this case) as I trek into the unknown to locate a way to progress. Keep in mind that this is a resource I often can’t store because both my on-person backpack and ship bank are full. 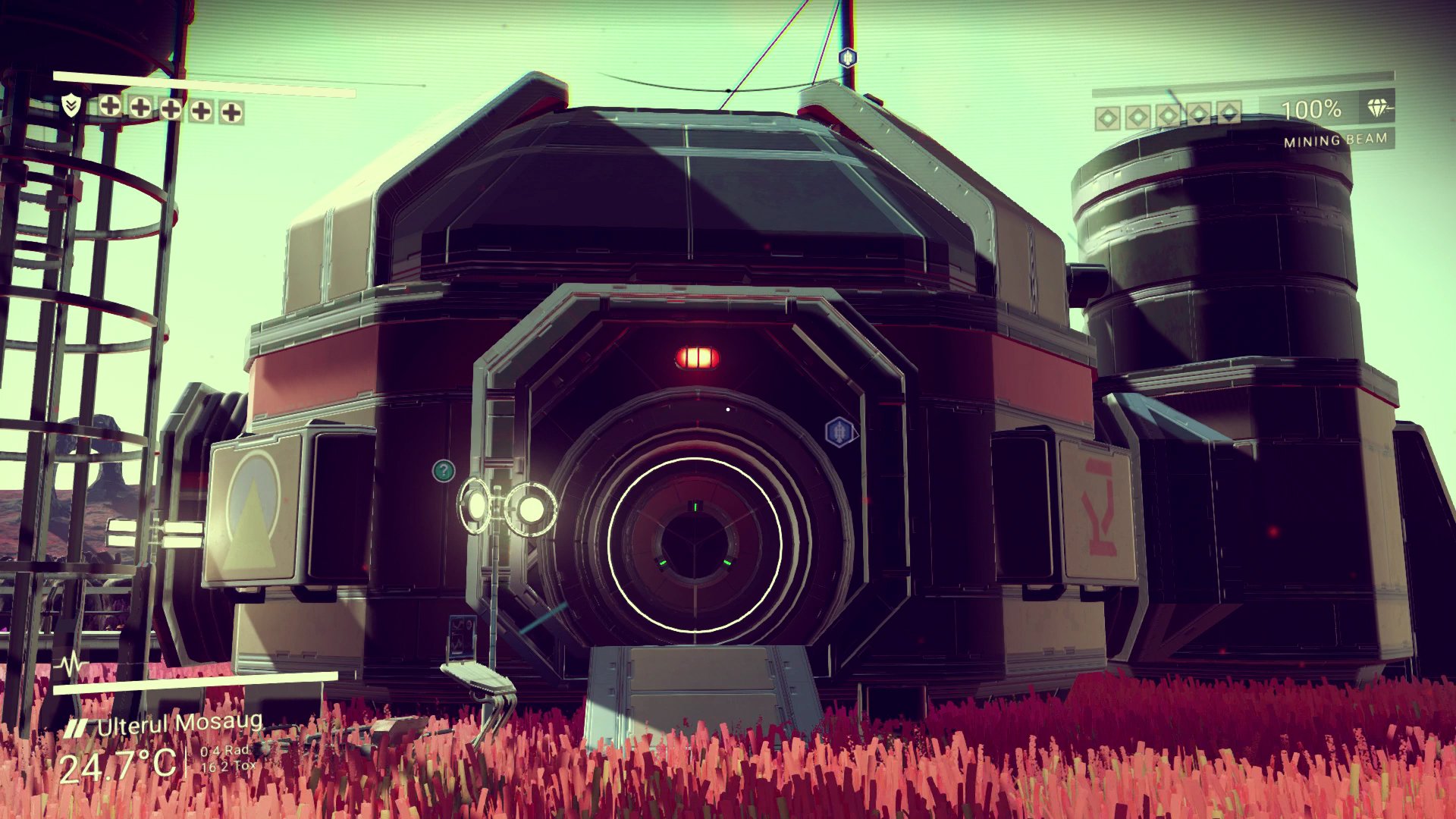 You also need to refuel your mining tool (which doubles as your weapon), your life support systems, and your armor. From this hardcore 4X and simulation player’s perspective, it constantly keeps people on their toes, but not everyone will likely feel the same way. In terms of the ship babysitting in particular, it feels like a chore. Now, was it fun roaming around for 30 minutes trying to find a red crystal so that I could fly for another several minutes? Sure.

I found an awesome underwater cave in the process that I spent a further hour exploring. I mean, how many games can boast that level of granular detail? The juice is worth the squeeze so far, and something tells me the mid- to late-game experience will be a little more manageable once I get a handle on everything. Heck, I might be laughing about it in a few days or so once I’ve attained a complete zen-like understanding of the resource system. But for now, it feels off.

So that’s my main complaint so far — the gamey details. As an “experience,” No Man’s Sky excels, and should delight people who are already predisposed to sci-fi sims. As Hello Games has noted time and time again No Man’s Sky is not a multiplayer game. There are little “discussion” points to be sure, as well as some leaderboard-style conventions with the ability to name galaxies and points of interest, but nothing massive. This, for the most part, is an isolated adventure. And “isolated” essentially describes my state of being while I work on a full verdict for a review later this week.