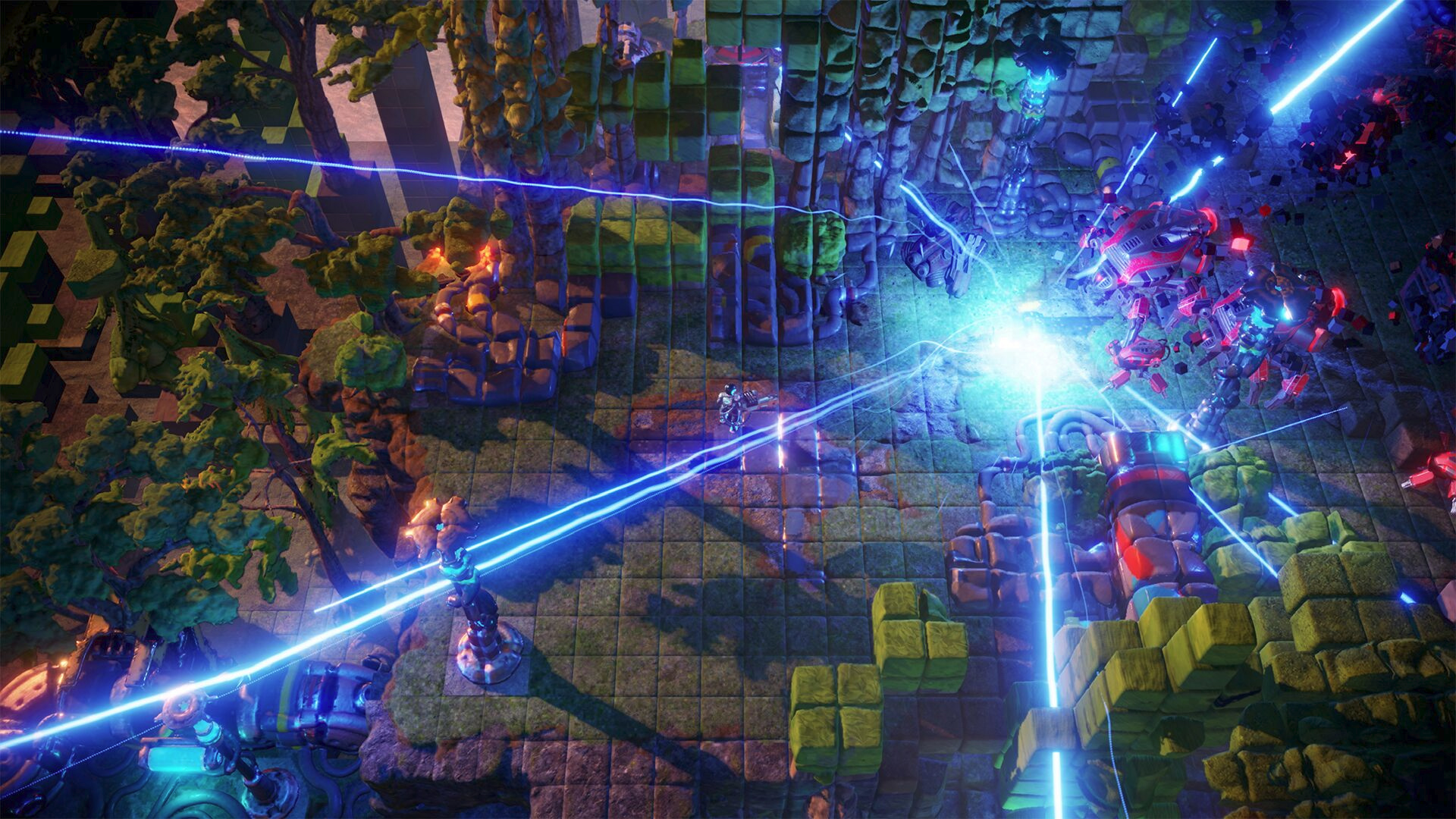 A few seconds into Nex Machina, I knew Housemarque had nailed it. Fundamentally, it just works.

The studio has won over a lot of arcade lovers with games like Super Stardust HD and Resogun. I liked ’em and the team’s newer title, Alienation, quite a lot. But Robotron: 2084 was always my main jam. That’s what I wanted to see someone base their game on. That’s what gets me fired up.

Nex Machina is the same “shoot the robots, save the people” concept but modernized through the lens of Housemarque and Robotron‘s own Eugene Jarvis, who served as a creative consultant. It rules. 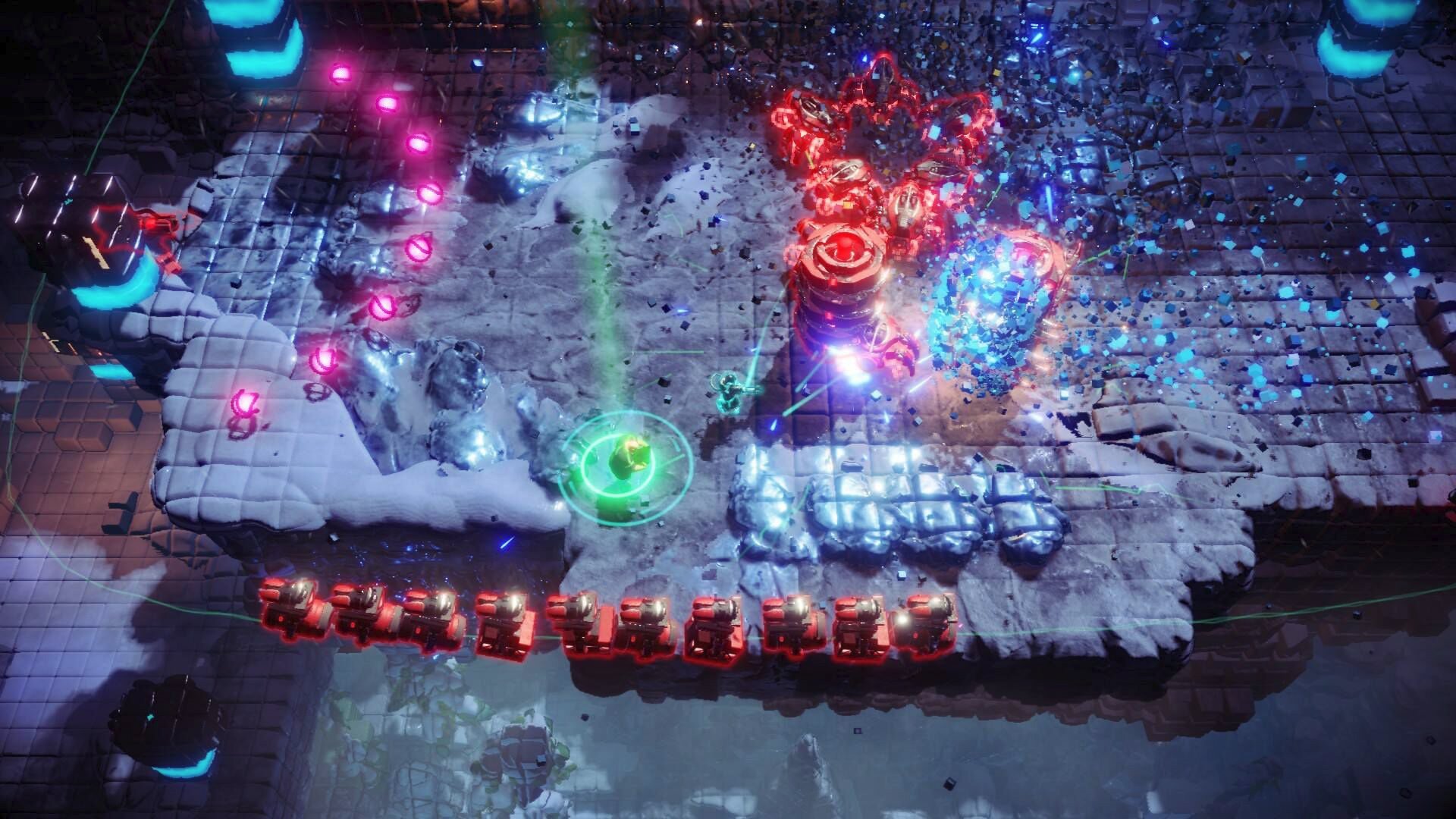 A phenomenal sense of flow is what makes Nex Machina so dang good. You’ll run around rescuing humans from people-snatching machines while other types of robotic fiends litter the map, and once you kill everything, you’ll seamlessly fly to the next zone and start anew. The shooting, handling, and dash-dodging are inherently quick, but the way levels bleed into one another at the snap of a finger makes everything soar. That same quick pacing also goes for dying. If you fail a level (a single hit will do it unless you have a shield), there’s a brief pause, then the game hurtles you back to the starting point and rebuilds everything instantly, as if nothing ever happened. You’ll get a split second to see what actually killed you and make a mental note to not do that dumb thing again, then you’re right back in.

It’s very easy to die in Nex Machina, and death does come frequently (yet fairly), but there’s no downtime to let you dwell on your mistakes. As a result, I’ve yet to get mad or even annoyed once. That’ll surely change on higher difficulties and as I push further into Arena mode, which has modifications like faster speeds or a time limit and dangles in-game currency (used for cosmetics) on a stick. That stuff doesn’t waste any time getting tricky, which is good news for the longevity of this game. The five-world campaign can be completed in one sitting without much fuss, especially if you have a local co-op buddy to help clear out incoming robot waves and keep the map reasonably open.

At this point, you might be wondering why this is a review in progress and not a final verdict. Basically, I need more time. I know the foundation is there and I’m having an absolute ball with it, but Nex Machina is one of those titles that doesn’t truly open up until you’ve dug into harsher difficulties.

I also feel like I’m missing out on a lot of secrets and alternate paths. I mean, I only just figured out that you can get a score bonus by dashing at the exact right moment as one level ends and a new one is about to begin. This game is overflowing with nuanced mechanics.

If you like Robotron: 2084, its follow-ups, or anything Housemarque has done in the past decade plus, this one’s a safe bet. I know Nex Machina is good, I just need to know how good, exactly, and whether it holds up over time. Based on my impressions so far, this might be a modern-day classic.

Filed under... #Arcade#cooperative#housemarque#reviews in progress