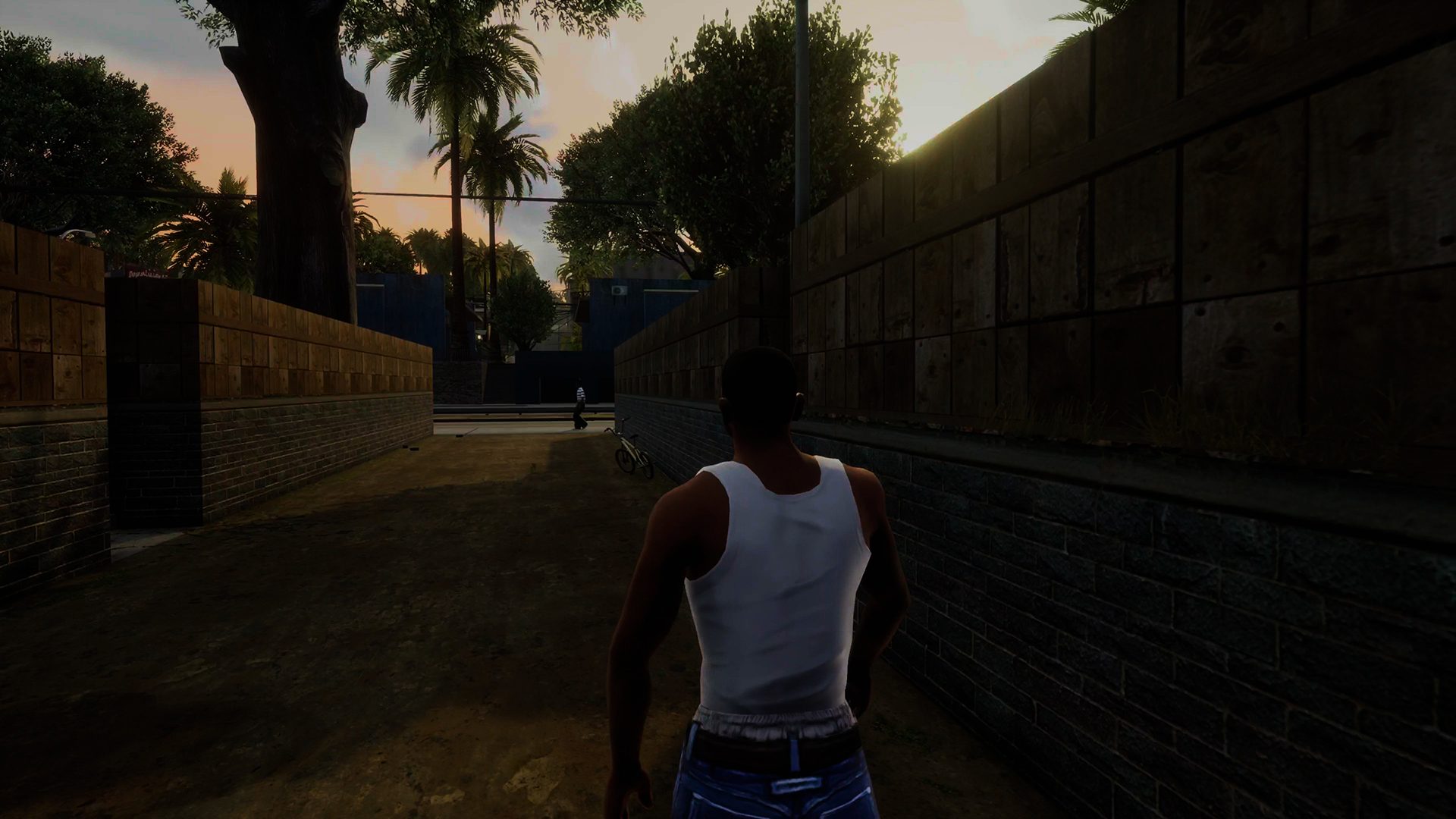 Before I jump into each individual game, let’s discuss the high-res textured elephant in the room that is this collection’s visuals. If, by some miracle, you aren’t aware yet, basically, the graphical fidelity of the Definitive Edition for these three games is all over the place in terms of quality.

At their best, many of the updated environments look pretty solid (at least from what I’ve seen so far). The bright neon signs in Vice City look stunning in 4K HDR, and they’ve also added some cool effects like parallax interiors for a lot of the windows and storefronts across all three games.

For the most part, the updated visuals make revisiting these iconic locations an absolute trip. Once I actually got knee-deep into playing each of these games again, I began to realize that – outside of the visuals – the all-around gameplay enhancements are pretty trivial for the most part. So, with the graphical talk (mostly) out of the way, let me recap my experiences with each of these games so far.

I adore Grand Theft Auto III. I have so many fond memories of spawning a tank, going on a rampage, making the gun on it fire backward to propel even faster (or even literally fly off ramps while doing so). However, outside of the rampages and cheat codes, following the basic mission structure and story alongside the other games in this collection, it really becomes evident just how basic Grand Theft Auto III feels by comparison.

I love Tommy Vercetti and CJ, but I’ve always viewed Claude Speed as just some mute dude who took Catalina off CJ’s hands and ultimately paid the price for it. Admittedly, even the supporting cast of characters range from somewhat interesting (like Toni Cipriani and his mom constantly yelling at him in the background during cutscenes) to downright trope-filled – like a lot of the other mission givers you encounter.

I’d also consider Grand Theft Auto III the most challenging game in the collection in terms of missions because so many of them involve timers, and the controls – for the most part – are still very rigid and janky all around. If you were expecting some crazy overhaul to the combat, then you’re going to be disappointed. Combat is still pretty much the same run-around-and-lock-on affair that it was in the original, and it can be incredibly rough and unforgiving at times.

In terms of improvements, the updated weapon wheel now slows down time when switching weapons, which is an absolute godsend, but you should still fully expect the Triad to blow up your car the moment you enter Chinatown. Thankfully, the inclusion of a proper in-game map (waypoint markers and all) can help you avoid that. It’ll also make finding those pesky bridges during later time-based missions that have you going across them far less stressful, thanks to GPS routes like in Grand Theft Auto IV and V.

Vice City is easily my favorite GTA game from the original PS2 trilogy. This game was pretty much my introduction to the ’80s growing up (a decade I wasn’t even born in). Despite that, though, I still fell in love with the radio mix. Hall & Oates, Megadeth, A Flock of Seagulls, Vice City was my introduction to nearly all of this music.

So, if you’re like me, the first question that was on your mind when this collection was announced was whether or not Rockstar renewed the license to bring back the complete soundtrack for these games. Sadly, they didn’t (and possibly couldn’t, no matter how much money they tossed at them). This is purely speculation, but it wouldn’t surprise me if some of these artists just don’t want their music associated with Grand Theft Auto anymore. So that means no “Billie Jean” – which is absolutely criminal (and not in a smooth way).

Do you know what’s even more criminal, though? Tommy Vercetti (and I don’t even mean literally). I’m specifically referring to how he looks now. It’s one thing to botch random NPCs or side characters, but it’s a whole other thing to mess up the look of the actual protagonist. Obviously, this is a subjective take, and some folks may not care at all, but I just can’t get over the updated model for Tommy. He looks weirdly younger and more like a bloated Ken doll now.

Outside of the visual and audio hiccups, Vice City remains a more action-packed GTA III in terms of missions. It has bigger set pieces (and thus more people shooting at you), and a fair bit of them are set within interior areas now, which – when combined with the still clunky lock-on shooting system – makes for some downright frustrating moments. Thankfully, the Definitive Edition iterations of these games also introduced the ability to restart failed missions without the need to drive all the way back to the mission marker. I’d argue that this new feature is probably the best quality-of-life update across the entire collection.

However, when this collection was initially announced, outside of the soundtrack stuff, I had one other question on my mind…

Outside of the possibility of a restored soundtrack, I only had one other question on my mind when this collection was announced: What if they added Bigfoot!? Unfortunately, before I could even access the areas required for my investigation, I nearly forgot these earlier GTA games gated off the other parts of the game behind story progression. So, I had to spend a whole evening doing nothing but story missions in Los Santos before I got access to the entire countryside required for this investigation.

Hell, I even followed the damn train on my first attempt without any issues. I’m not sure whether that was pure luck, skill, or maybe Grove Street Games legitimately tweaked some missions across this collection to make them more manageable. Thankfully, with the help of save abusing and horse betting, I secured myself a small fortune as well. More than enough to purchase as much firepower and body armor I needed to pretty much breeze through most missions, and witness CJ’s face become a horrifying pixel monstrosity during a cutscene.

There were three rumored areas Bigfoot would supposedly appear: Back O’ Beyond, Mount Chiliad, or the Shady Cabin. So, after putting on The X-Files theme to set the mood just right, I began my search in the deep woods of the Back O’Beyond to truly see if some bored developers decided to make one of the most iconic San Andreas myths a reality (I don’t count the one in GTA V because that was just a dude in a costume).

As the sun was setting in the Back O’Beyond, I stumbled on the Shady Cabin. Just like in the original, it was abandoned. Not entirely surprising, but it was worth at least checking out. The Back O’Beyond had some interesting oddities in the original game outside of empty cabins and Bigfoot myths; it also had ghost cars!

That’s right, creepy abandoned cars that randomly rolled down hills in the middle of nowhere. People theorize this was purposely implemented by the developers to freak people out that were exploring around here. Sadly, in the Definitive Edition, these horrors spawn, but they don’t actually move or do much of anything now.

Shortly after checking on the cars, I noticed something a little odd in the form of a nearby bridge just clipping in and out of existence. I thought this was strange given the now-massive draw distance featured in this collection, so I immediately made my way there only to discover something supernatural… A ghost bridge!

That’s right, the moment I drove onto the bridge, it vanished beneath me! (I was still able to drive on it, thankfully). I’ve come back here multiple times now, and this happens every time. I kind of doubt it’s intentional and likely just another bizarre graphical bug, but I found it very amusing. From there, I only have one last place to check out: Mount Chiliad.

Once I arrived, I took out my camera and panned around for a few minutes, but much like my attempts at looking for Bigfoot in the original game, there was nothing out of the ordinary. Once at the very top of the mountain, I took in the beautiful sights… and the draw distance of San Andreas.

It’s pretty jarring (especially when flying around in a plane or jet), and I do wonder if Grove Street Games will possibly address this in future patches with some sort of fog implementation as was used in the original.

So far, my all-around experience with the Definitive Edition trilogy is very mixed. On one hand, I’m still having fun just revisiting these games. On the other hand, I can’t help but feel like this collection needed more time in the oven. Going forward, I have a full review (and video review) planned, and I’m morbidly curious what other graphical oddities I’ll encounter once I begin playing and exploring the later acts of these games. I’m also dreading the RC vehicle missions, but perhaps they’ve tweaked them, or at the very least, improved the controls on the tiny vehicles themselves.

Stay tuned for my full review to find out!