My favorite MMO since World of Warcraft in its prime

Last year close to its launch, we reviewed Final Fantasy XIV: A Realm Reborn — so what’s with the retread, you ask? Well, that was before we implemented our Reviews in Progress program, which was designed to cover games as a whole with a score down the line, including endgame content that MMO veterans may want to know about before dropping their cash.

The fact is, A Realm Reborn has had many updates since launch, including the massive 2.2 patch that was implemented recently and a PS4 port. In an effort to step up our MMO coverage, we’ll be taking a look at the whole picture in regards to Final Fantasy XIV both at present and going forward.

It doesn’t even feel like work, either — I’m enjoying myself far too much. 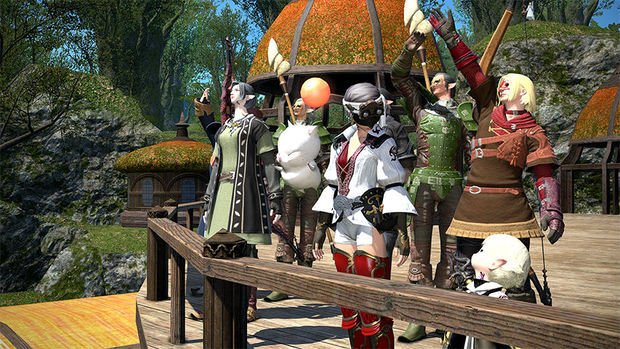 To be clear, this review will center on the game as a whole, but I’d be remiss to not mention how wonderful the leveling process is, even if it partially consists of typical MMO kill/fetch quests. The sheer beauty and variety of the worlds will keep you going, as will the beautiful soundtrack — which I’d place right next to some of the other franchise greats.

Despite the simplistic nature of the quests, there are tons of things for you to do while leveling, and only a small amount of story tasks require the help of a static group (I got to 50 by mostly soloing content). You can opt for the main storyline, sidequests, exploration and gathering/crafting (which has its own level system and rewards), FATEs (world events), dungeons, and more.

Playing on the PS4 is also a major step up from the PS3, as the framerate issues of Sony’s prior platform are now gone, and the game looks like it’s jumped from low settings on PC to maximum. I’ve had no problems doing level 50 content as a melee class on a console (I’d reconsider as a healer), and if I needed to, I could just hook up a mouse and keyboard. It helps that the PS4’s touchpad acts as a makeshift mouse, complete with clicking motions, and that Vita remote play is completely viable for questing.

Once I made the long trek to 50 with my Dragoon, I was surprised at the sheer amount of content available — and not just hardcore raiding or throwaway content. There’s roughly 10 more hours of story that’s been added since patch 2.2, culminating in an epic primal fight with Leviathan — a summon more than a few Final Fantasy fans will recognize.

There’s yet another 10-hour side-storyline involving the comedy relief character Hildebrand, which concludes in a “Battle on Big Bridge” fight with Gilgamesh — another fan-favorite character. You also get a Magitek armor mount just for completing the core story, which is a perfect reward for fans of FFVI. At first glance you’d think this is all just fanservice, but it’s integrated into the game in a great way that doesn’t detract from the experience one bit. You also get to totally run away from a chicken after Gilgamesh turns you into a frog — and yes, he runs away at the end in comedic fashion.

Beyond that, those who aren’t comfortable with tough raiding content (typically eight- or 24-man instances) will have plenty to choose from with the insanely fun four-man dungeons, some of which have been reskinned in the form of a “hard mode” (similar to heroics from WoW). The beauty of this system is that it mimics World of Warcraft‘s “badges” mechanic, in that you always get something from doing high-level dungeons, even if you don’t get any loot.

Specifically, most max-level instances drop Tomes of Mythology and Soldiery, which can help you get some of the best gear in the game. Heck, one of the best weapons you can get early into max-level content (Relic) is conveniently worked into a story-like quest. If you’re confident enough you can also jump right into hard mode primal fights, including Ifrit, Garuda, and Titan, as you work your way up through their extreme mode variants — which will really test your skills as an individual player. 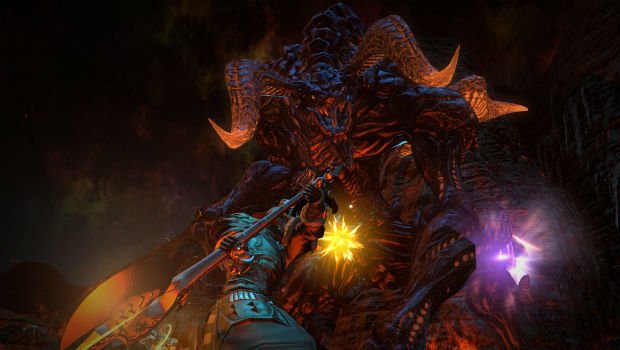 And really, that’s one of the best parts about Final Fantasy XIV‘s endgame — once you work your way up to Titan hard mode, the game really comes to life and shows off how well the fights are designed. You’ll really have to learn your class and work for a kill, and it becomes extremely rewarding once you’ve vanquished most of these foes. It’s a feeling I haven’t really experienced since the original World of Warcraft was in its prime, and the beauty is there are tons of tiers available for the most casual and hardcore of players.

These fights are littered with fanservice (as you can plainly see), and even go as far down in the Final Fantasy rabbit hole as FFVIII‘s Diabolos. It’s crazy how unpredictable the game’s post-50 content is — I was left guessing at every turn, and sometimes completely overwhelmed at how much patches 2.1 and 2.2 have added to the game as a whole. If you ever were curious about FFIXV, now is the time to jump in — this game has more support in less than a year than most MMOs have in general.

At present, I’m working my way through most of the extreme mode encounters, as well as some of the last bits of content like the first and second Coils of Bahamut. Once I’ve touched pretty much everything the game has to offer at present, I’ll give you a final verdict on what I think of it overall (hint — I love it so far). Also, count on more impressions and coverage of all major patches for A Realm Reborn for the foreseeable future.