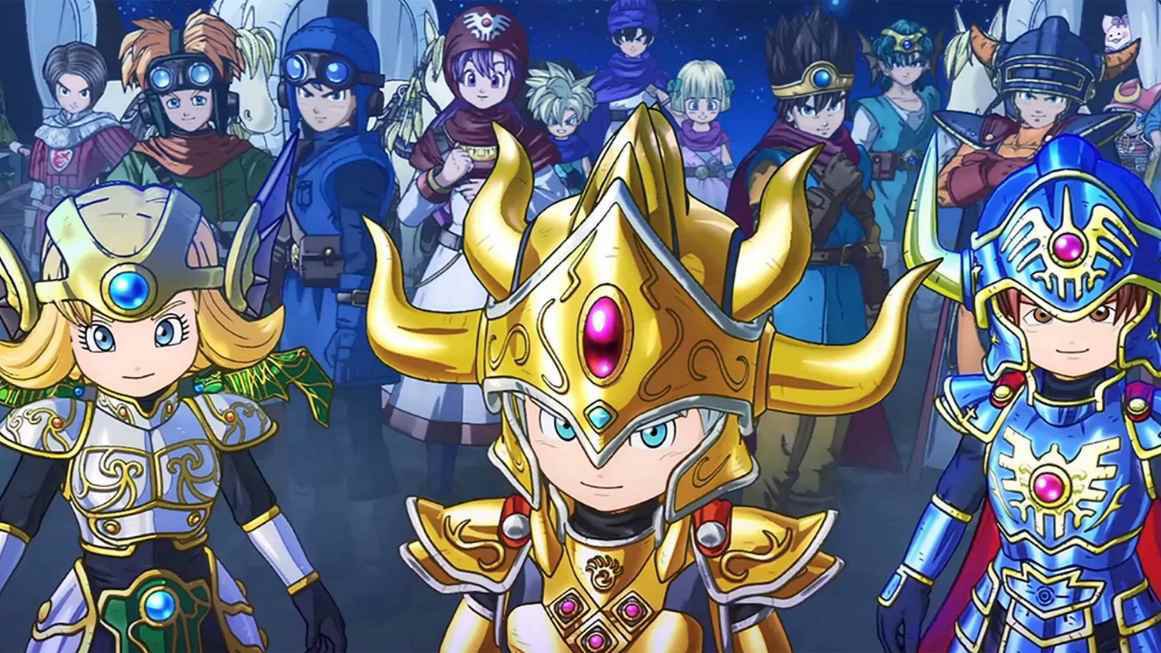 Gems for sale! Get your gems!

Dragon Quest is, without a doubt, one of my favorite properties in all of entertainment. It’s also one that tends to leave me yearning far more often than it quenches my thirst for it. While we in the west need not fear a lack of localization for non-MMO mainline entries in the franchise, a good chunk of Dragon Quest games don’t see our shores. Several 3DS titles never left Japan, along with numerous arcade machines and mobile apps.

One such app was Hoshi no Dragon Quest. Originally released in Japan back in 2015, it seemed destined to stay exclusive to its home turf until last year, when Square Enix announced a localization was on the way. I eagerly downloaded it the moment it became available, fully aware that a five-year-old, free-to-play mobile RPG might be set up to squeeze me out of some cash rather than provide me with a worthwhile adventure. 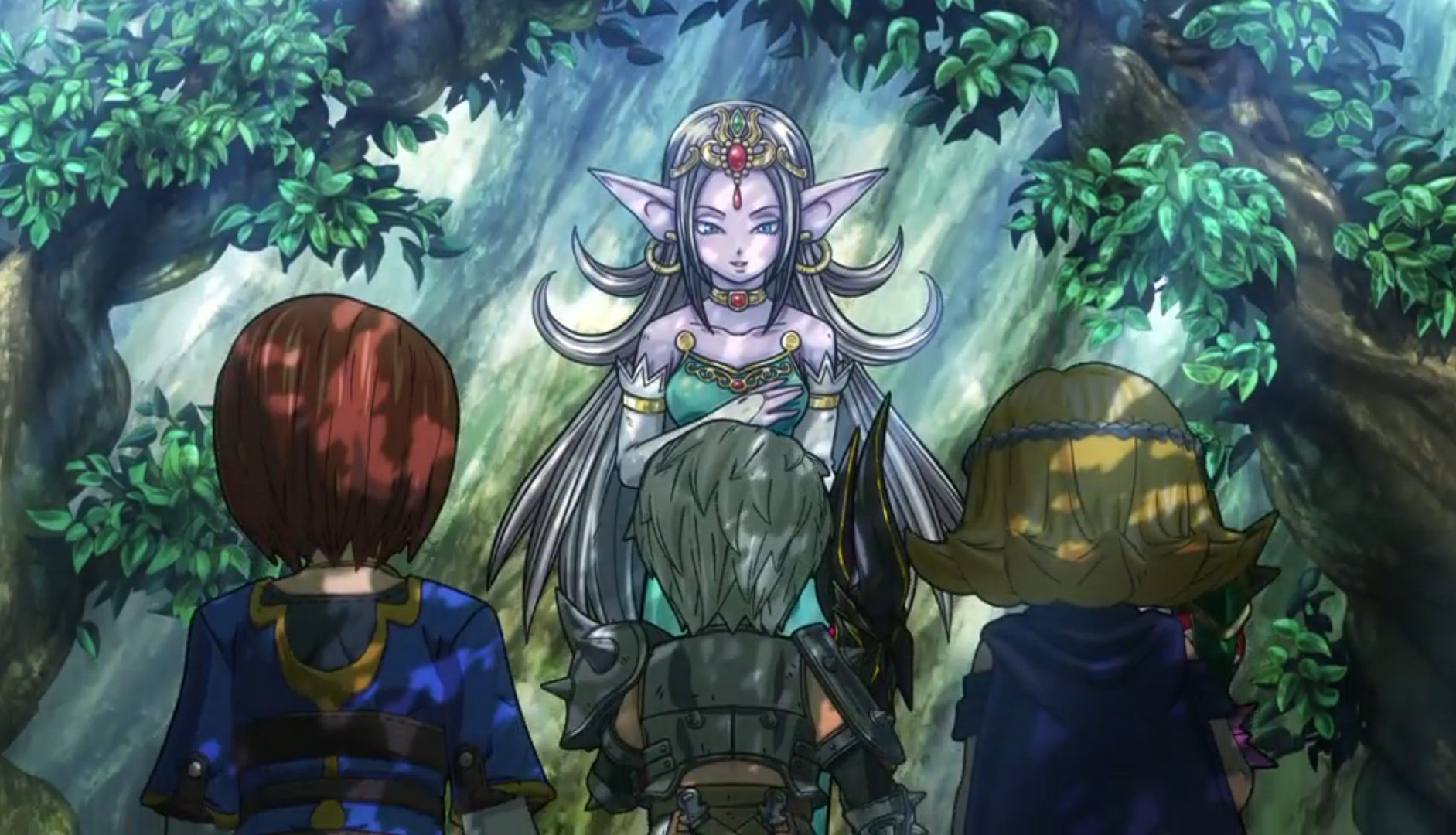 Dragon Quest of the Stars has a familiar opening for most any seasoned JRPG fan: a hero washes up on a shore with no memory of who they are or how they got there. With help from a furry local and two others found on the beach, you set off to discover who you are while curing what ails the people of a strange and magical world. Of the Stars begins with a quick character creator before sending players to Innish Isle, the tutorial map and beginning of what promises to be a long and expensive journey.

The few quests found on Innish Isle explain the basics of Dragon Quest of the Star‘s limited gameplay. You’re presented with a destination on a map. Select it, and your crew will set off, joined by a fourth party member drafted from a pool of computer-created NPCs until they’re replaced with characters from other players a bit later in the game. Before you set off for each destination, you can see how many battles you’ll encounter and the minimum level your party should be. Most everything on this first island is a cakewalk, especially considering all the free loot the game gives players just for downloading and starting it up.

When you do get into battles, your party attacks automatically. You can dictate which opponents they target, but most of your interaction in these fights will be boiled down to blocking and using special moves. These moves along with the guard function are set to meters that build throughout each fight. When you guard, your characters will guard for a few turns. Using special moves at the right time can actually give your party twice as many attacks in a turn if you play your cards right. In the early hours of the game the smartest tactic is to let all your special attacks build up and only unleash them in a chain attack on bosses.

Boss battles are predominantly found in dungeons. Dungeons are presented as individual floors with a set number of battles you must win to proceed. Each dungeon floor will have a trio of additional tasks, such as don’t die or don’t use any items, to complete for added bonuses. Once you reach the second island, these tasks will become more varied and you may need to revisit one after you obtain a specific type of weapon, or are using a certain vocation to fully complete it.

There is a lot of junk to collect in this game, from weapons and armor to items and ingredients. There are also coins and gems to collect, which is the perfect segue to talk about the various microtransactions available.

If you have money, Dragon Quest of the Stars is ready and willing to take it. You can buy gems — sold at prices similar to other free-to-play RPGs — that can be used to expand your inventory, expand your safe storage, buy loot boxes, or refill your energy meter (each quest you take costs a certain number of energy points). Then there are the special bundles that can go for as high as $25, guaranteeing you certain sets of armor and weapons as well as other items. There’s also the Star Pass monthly subscription fee for $8.99 a month. This will net players limited-time equipment, extra equipment lockers, one free stamina refill a day, additional luck and more.

You can also buy the Star Adventurer’s Passport, which can only be purchased with gems you purchase rather than earn. This will grant you tickets for lucky chest draws (i.e. loot boxes), additional luck, and extra storage. If you buy the passport once, you’ll also be eligible for the Premium Login Bonus, which gives you four- and five-star items each time you log in for 10 days. Both the pass and the passport will also give you the “opportunity” to buy a Star Pass Gem Pack. I have no idea what that is but I’m guessing it has something to do with the Star Pass Coins you can exchange for exceptionally rare items and keys that open special dungeons. 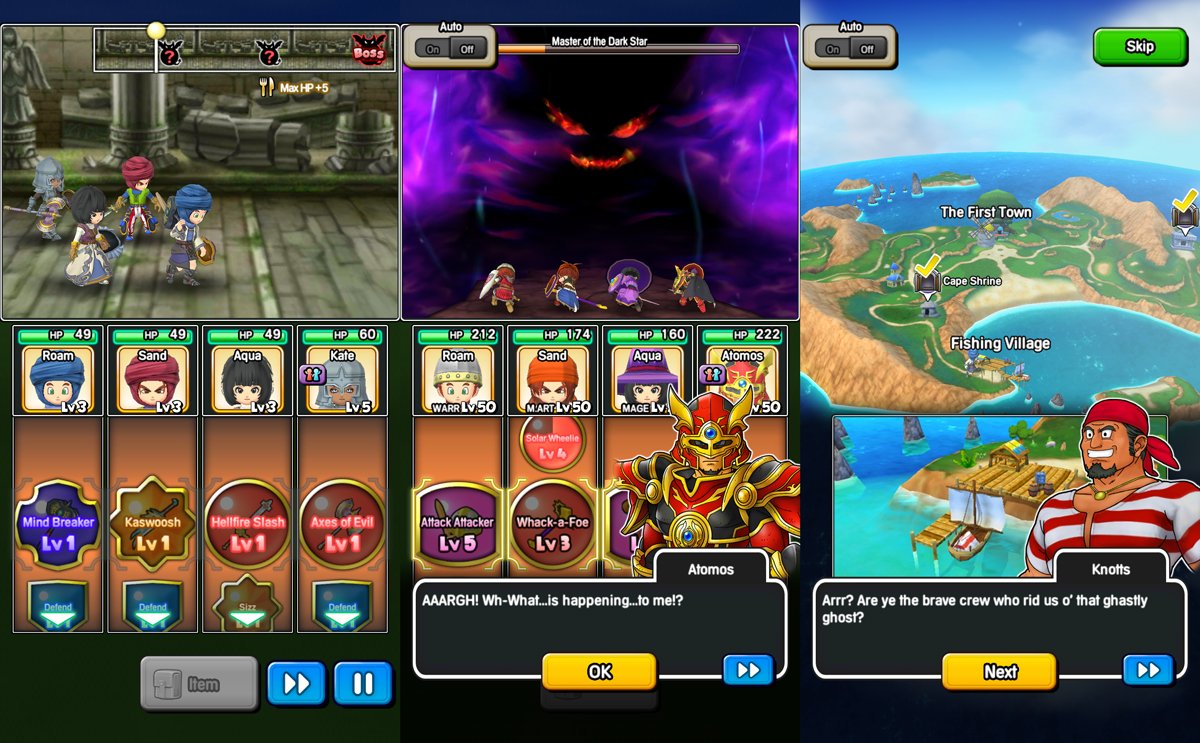 That is a lot to deal with and like most other free-to-play games, you’re hit with a few ads for these available purchases each time you start it up. Once you get past all that though, it’s a pretty standard mobile JRPG with a delightful Dragon Quest coating. Everything you get through gameplay can be sold, upgraded, traded, or merged with other items. There are recipes to unlock, event dungeons to conquer, and missions to complete. Like most free-to-play games, these early hours are exceptionally generous and the way the game threw overpowered weapons at me through the free loot box pulls has eliminated any sense of a challenge so far.

It remains to be seen if that will be true the further I get into the campaign, and I’ll admit, that’s the only thing keeping me going right now. This tale of my hero, his companions, Cyril the Squirril, and my grandfather-in-a-book Gaius traveling to defeat the Master of the Dark Star is, at the very least, intriguing. The bright Dragon Quest artwork is certainly a welcome sight on my phone, though I am a bit disappointed with the game’s performance so far. There is a lot of pop-in on my Google Pixel 3a and I’ve experienced an armful of momentary freezes. Nothing to ruin the experience, but certainly evidence that, perhaps, this five-year-old game hasn’t been optimized for newer devices.

Either way, my journey to become the Questocrat I was born to be has just begun and I can only hope the rest of Dragon Quest of the Stars manages to stay away from the free-to-play trappings that have ruined so many other mobile games.